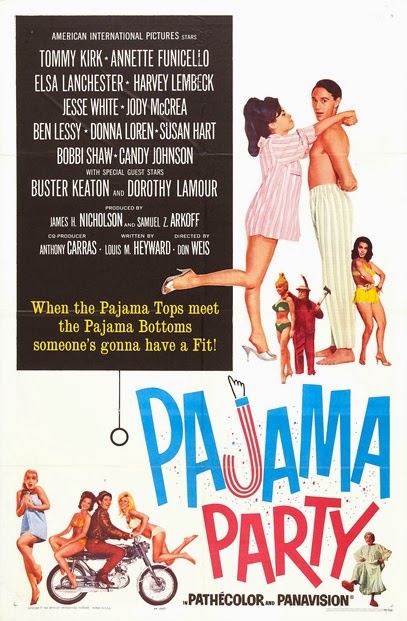 No, I'm not going to spell it 'pajama', America, it's 'pyjama'. Also, aluminium, not aluminum, and Herbs, with an AICH. The H is not silent!

Err, getting that out of the way, onto beach party flick Pyjama Party...

This movie is an entry in the Beach Party series, in the respect that it isn't. It isn't, but is made by the same people, has hot women in bikinis, and stars some familiar actors, albeit in different roles, although it does have the Rat Pack from all the other films.

I was really looking forwards to this after how much I enjoyed How to Stuff a Wild Bikini, but it was apparent very soon that this movie sucked. I debated turning it off only ten minutes in until a gang of certain characters showed up...

Despite the awesomeness that is Elsa Lanchester and Buster Keaton, I had zero interest in the film until Eric von Zipper and his Rat Pack showed up! But that made things worse, because that meant I had to sit through a movie I wouldn't like just for a select bunch of funny characters I do like. But I didn't. I switched the movie off. Sorry Alberta. I'm sure you were awesome.

When I saw that aliens were in this movie, I was surprised, although I've no idea why, since other entries in this series involve magic, and ghosts, as well as a tangentially connected movie with Vincent Price's girl bomb and bikini machine creating mad scientist Dr. Goldfoot. But still, the aliens really come out of left field.

The movie has a few guest stars, like an unfunny and annoying song that unfortunately stars Dorothy Lamour-Unfortunate because I like good ol' Dotty Lamour. And said musical number also has a cameo from a young Terri Garr and Toni Basil. Did any of you just have the same thought as I did? "Toni Basil? Singer of Hey, Mickey? Wasn't she in diapers in 1965?!". And the answer is yes, that Toni Basil, and no, she was born in 1943! Hey, Mickey is such a teen girl song, and even in the video clip, Basil is decked out in cheerleader garb, and she was forty?! And she's seventy now?! God, I feel old!

I ducked out about twenty minutes into this flick. I figure at a point I'll buy the Beach Party box-set, and when I get to Pyjama Party, I'll just fast-forward through all scenes that don't include the Rat Pack (maybe I'll watch the Elsa Lanchester scenes, but only maybe, because her character is linked heavily with the annoying dull plot I don't like).

Now, how about I close us out with some tunes from another sort-of-but-not Beach Party flick, Ski Party!...

Yeah, I'll just as quickly listen to a Leslie Gore song as I would heavy metal or hard rock, and I know the lyrics to Sunshine, Lollipops, and Rainbows just as verbatim as the lyrics to Alice Cooper's Bed of Nails. I definitely have a taste for varied types of music, that's for sure!