Today, I'll be looking at the two Bad Lieutenant films, both crime movies involving a (kinda) crooked cop. One coming from the guy who made a film about a kung fu prostitute murderer, and a guy who kills hobos with a power drill, and the other from the man who gave us Nosferatu, and Aguirre: Wrath of God... 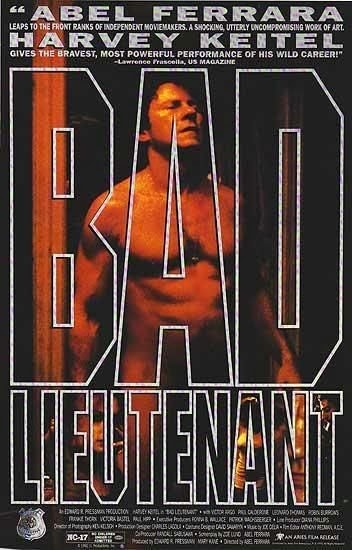 Abel Ferrara's Bad Lietuenant is about an unnamed lieutenant, and stuff happens involving a nun. That's it, basically. Nothing happens in this damn movie!... 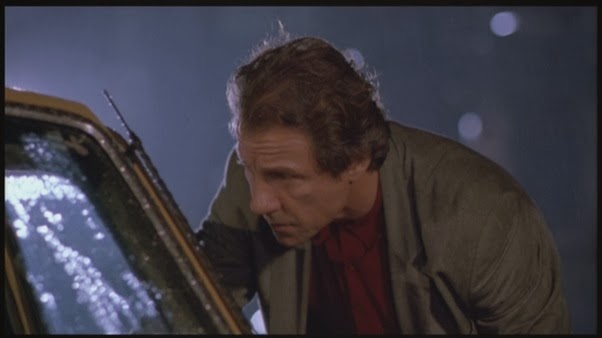 When I first saw this some years ago, I really liked it! And now I hate its guts. Funny how things work out. I had the same reaction to The Hit.

Onto the good, Harvey Keitel acts the hell out of his role, and he is fantastic! His monologue at the end is awesome! The film also has something from Keitel which is nothing new if you've seen The Piano.

As good as Keitel is in the role, the unnamed lieutenant is a dull character. Dull because we know nothing about him, and he has no character, or depth. He's just a druggie semi-crooked cop. 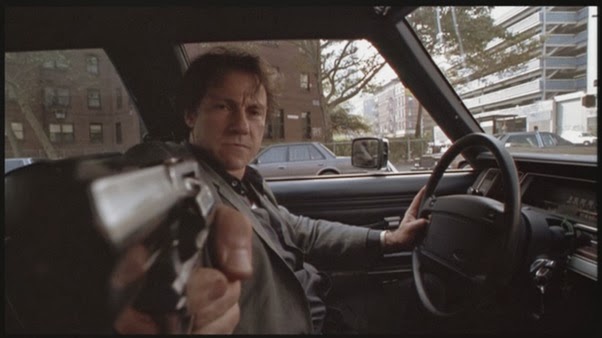 For the titular bad lieutenant, he's not that bad. Sure, he's addicted to drugs, and he stoops to stealing the stuff from crime scenes, but aside from that, he's not a killer, not a rapist, or a torturer, or psycho. He's a dick, but he ain't all that bad. By the way, given he's a cop with at least three kids, you'd think he wouldn't have time for drugs and bookies.

The plot to Bad Lieutenant is barely there. The film is mostly just a bunch of stringed together random scenes of this cop's life.

Like I said above, the monologue near the end is great stuff. Unfortunately it's pretty unintentionally hollow, rather than insightful, given something annoying about the whole last act. Also, the "I've done so many bad things!" line comes across as clunky. It's a pretty unreadable line (if it doesn't seem that way seeing it there, it will if you see the film).

By far the biggest problem with Bad Lieutenant is that it's BORING! Many scenes are too drawn out, and the editing is scattershot. The direction is pretty good throughout, and great in the last half-hour. Tip of the hat to Ferrara for that at least.

If you want an example of this movie's boredom, here's one. There's one scene where the lieutenant and some chick (played by co-writer of Bad Lieutenant, and star of Ferrara's Ms. 45 Zoe Tamerlis Lund, the movie never bothers to tell us who she is) both take turns in shooting up heroin IN REAL TIME! It takes nearly five minutes, and there's no dialogue at all for the majority of the scene! 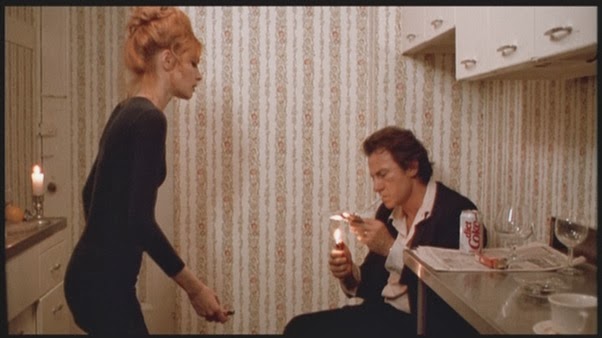 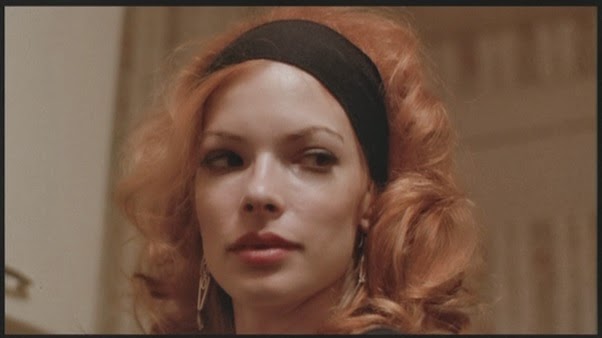 There's one strange scene, where after having a threeway with two prostitutes, a naked Harvey Keitel walks around tweeting like a bird. Yeah. He's bombed out on drugs, but the film doesn't show that, so unless you've read about the reason for his behaviour beforehand, you're gonna be very confused and weirded out! 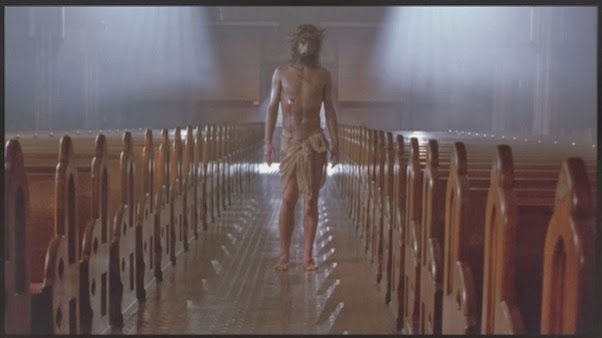 There's also a really stupid scene where the Lieutenant takes out his big fuck-off magnum and literally shoots his car radio out in anger after losing a gamble! Now, I remembered this scene taking place late in the film, when his final gamble has failed, and he now owes hundreds of thousands to his bookie. While stupid, that would at least make sense, given how desperate he is. But no, the shooting scene is way before then, so it just comes across as hilarious.

The film has some overwrought symbolism here and there, like the intercuts of Jesus on the cross during the rape scene. 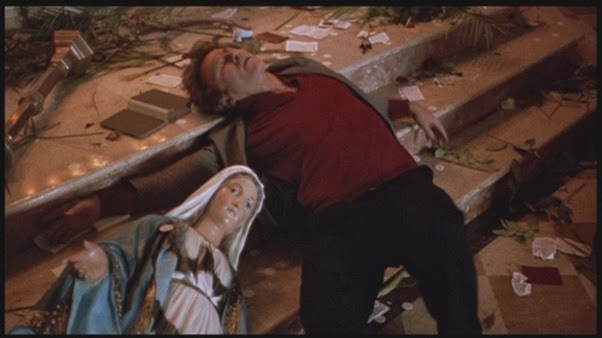 I don't like the plot point of the nun forgiving her rapists, as I find it annoying. This nun is brutally raped and tortured, yet forgives her attackers, because religion, love, and stuff. However, that doesn't nearly piss me off as much as the ending, because the thing with the nun is just a bullshit decision from a character in the story, rather than the writer. The ending is total bullshit, given what happens with the rapists!

The film is dark and grim, and some find it pretty soul-crushing, but it left me unfazed. But I'm me, and I was left unfazed by a film where a woman vomits out her intestines, then makes love to them*. Emily of Deadly Dolls House of Horror Nonsense hilariously said in a comment in a post that "I'd rather buy Abel Ferrara a puppy and ice cream cone and tell him the world isn't nearly as bad as he makes it seem." Yep, that's about right!

*That film may or may not exist.

I don't recommend Bad Lieutenant at all. It's a total snooze. Some people like it, and I once did, but now, I say stay away from it, and watch what I'm about to talk about... 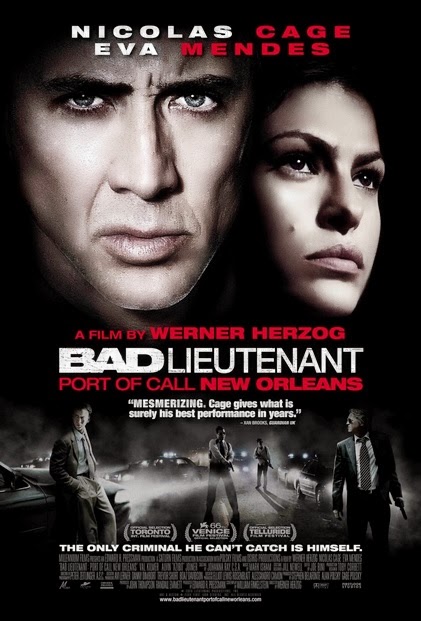 The film is about Terence Mcdonagh (Nicolas Cage), a detective working in New Orleans (unfortunately Shadowman does not show up). During Hurricane Katrina, McDonagh injured his back when rescuing a prisoner stranded in a flooded jail cell, and is on constant medication, which he gets addicted to, as well as other drugs. McDonagh is promoted for his bravery to Lieutenant, and months later, he's assigned to the investigation of the massacre of a family... 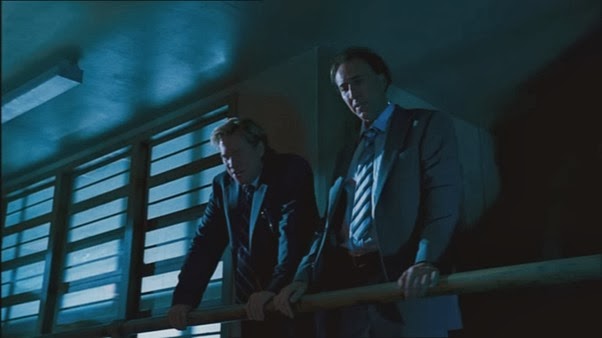 Bad Lieutenant: Port of Call New Orleans isn't a sequel, nor is it technically a remake (although it absolutely could be seen as such), and it just shares the title with the 1992 movie, without Abel Ferrara's approval. About that, Ferrara was...slightly annoyed. That's a kind way of saying he wanted everyone involved in the film to die in a car crash. I'm not using an analogy, he actually said that! Herzog denied that he was ripping off, or drew inspiration from Ferrara's film, which sounds like a blatant freakin' lie! I have no idea why he bothered, as not only do the films share the same title, but both are about a crooked, drug-addicted cop with bookie problems, and there are even some similar scenes. 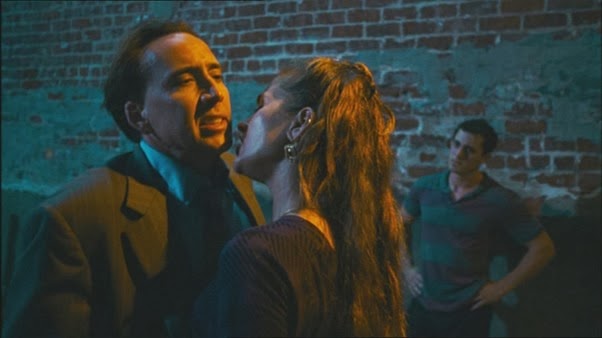 Further comparing the two films, while Abel Ferrara's Bad Lieutenant is starkly realistic, Herzog's, while still realistic, is in fantasy land, if that makes any sense. The tone is very different, in a good way.

I can only hope that despite his justifiably pissed off attitude, Ferrara either saw the film and loved it, or will see the film at some point and love it. 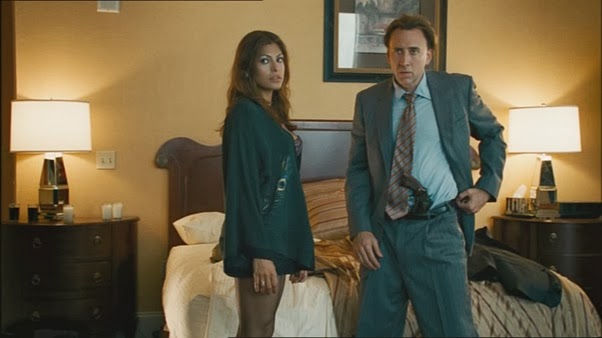 The plot to Bad Lieutenant: Port of Call New Orleans is very good! It's well written, and it's a very enjoyable sit! You won't believe the movie's two hours long, as it goes by so fast. The atmosphere is great, thanks to the locale, and the great score. 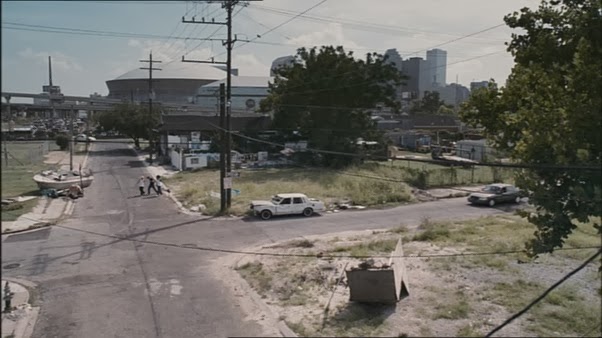 The film is very quotable ("To the break of dawn, baby, to the break of dawn!"-"What are those fucking iguanas doing on my coffee table?!"-"Could I have my prescription, please?!"-"It's my lucky crack pipe. Do you have a lucky crack pipe?"-"Shoot him again, his soul's still dancing!" and many more), with numerous laugh-out-loud moments. The ending is a laugh riot! If you're used to grim cop movies, you're in for one hell of a surprise!

By the way, who knew the line "Do fish have dreams?" would be thematically relevant! 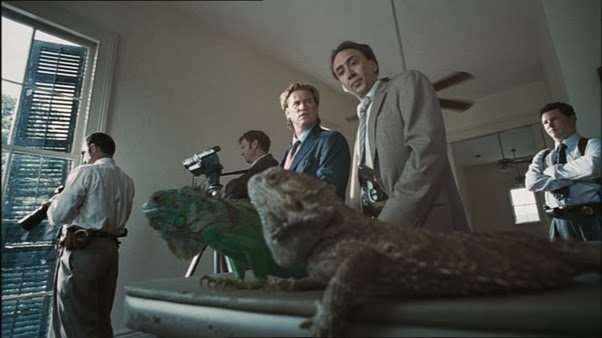 The acting's all great! Nicolas Cage turns in a fantastically kooky performance, Val Kilmer is depressingly out of shape here, but still a good actor, and everyone else is fine. 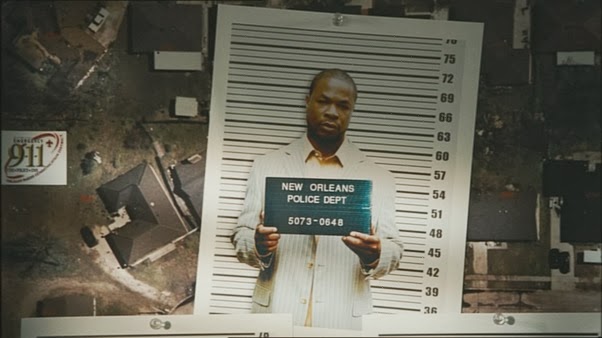 There is one problem I have with the film. Near the end, the first couple of minutes of a prior scene where McDonagh finds a young couple, hassles them for having drugs, and the girlfriend comes onto him to avoid getting arrested, etc., is replayed, for no reason. It's like a mistake happened in the editing process. Since it's not, I assume it meant to be metaphorical/symbolic of something, but of what? That McDonagh is still a bad guy, and hasn't changed? That sounds like it could be the reason, but that's bullcrap, as the whole climax and ending is just the freakin' opposite of that, so if that was the point, then the movie screws it over, or vice versa. 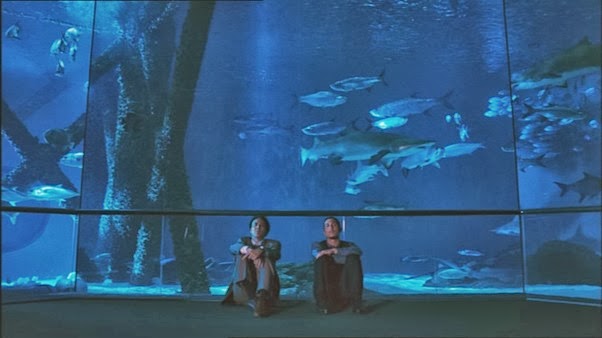