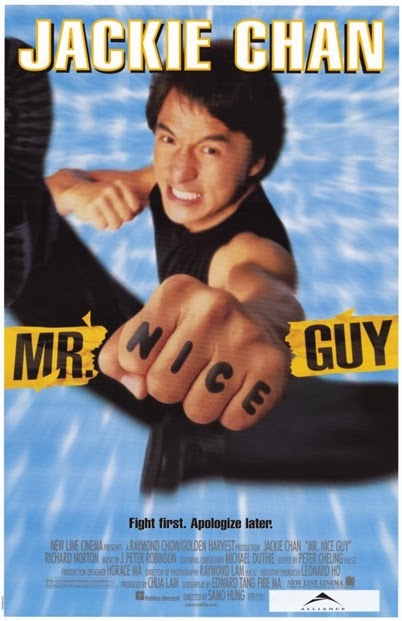 Mr. Nice Guy (or No More Mr. Nice Guy as I regularly mistakenly call it) is about Jackie (played by Jackie Chan-Wow, they really went out of their way to give his character an original name, didn't they!), a TV chef who gets embroiled in a gang's hunt for an incriminating tape that plucky journalist, Diana (Gabrielle Fitzpatrick) has filmed...

Mr. Nice Guy is a cool action flick! The acting is all good. Jackie Chan is great as the hero, and Richard Norton is fun as the villain, even if his dialogue is pretty cheesy.

The martial arts choreography is all great, and Jackie's stunts are always cool (except for the super dangerous ones, which just make Chan look like a fucking idiot with a death wish. There are no such stunts on display here though, unless that bandsaw was real).

The characters aren't exactly amazingly written, but they're servicable. The only problem is that the film has no resolutions to anything, as I'll address when I come to the ending. There are some stupid character moments, like how despite the fact that they're trying to retrieve incriminating evidence, Richard Norton's gangster's run around in public, in broad daylight, chasing, kidnapping, and shooting at people!

Diane is also kinda stupid. After everything goes down with filming the tape (her getting repeatedly nearly caught and killed), why doesn't she just go to the police? She'd be safe, the evidence would be in the right hands, and anyway, her cameraman is dead as far as she knows! She could at least call to send help for him to see if he got out ok, or at least make sure those who murdered him are brought to justice. Also, the chase scene partway into the movie with Diane only in her underwear is fanservice for sure, but, hey, I don't care. I'm a guy, so I can't hate on a scene like that! WOO!..Yes, I'm weak...

And there's that Jackie doesn't want he and co. to go to a safehouse, like goddamn idiots!

There's also a just-so-happens moment with a belt sander-ish thingy, where the only thing that stops Jackie from getting gutted like an unfaithful boyfriend is the machine's cord just happening to pulled out when the villain holding it goes to far (it cuts of jjjuuuuuussst as it hits Jackie).

This is a Hong Kong made film, though filmed in Melbourne. This was filmed pretty much entirely in English, with Australian actors, but when it came to the American release...

God, "I don' twant read no darn movie" fuckwits piss me off to no end! The offensive jerkoffs! It's even worse when Australian and British films get dubbed into American. English films getting dubbed into English! Yeah, American distributors really are that freakin' insecure.

The fact that the American distributors dubbed the Australian actors into American for their cut is not only offensive and borderline racist, but it also pisses me off because 1, Having the film be set in Australia is unique for a movie like this, or in fact, any movie, and 2, Do you know how many Australian films get released every year. About one, maybe two. And all the homegrown fiction we get on TV is terrible soap operas, and shitty gangland dramas! That's almost literally it. So when a film that's very Australian is Americanified, I get really pissed off! Thankfully I watched the proper-ish English cut of the movie.

By the way, I use that term 'Australian actors' loosely, as many of the actors' accents waver between broad Aussie, and broad American. I can only imagine it's because the actors wanted to pander to the American market, but also wanted to stay with their proper accents. This is kinda like that 60's Doctor Who story Enemy of the World, where the producers just figured South African was close enough to our accents (it's not), and hired a bunch of them to play Aussies.

Ok, back to the movie-The finale is great! It's extremely cathartic to see what Jackie does to the baddies after a whole movie of he and his friends repeatedly getting chased, shot at, and kidnapped.

The ending though, is not so good. It just stops! There's no denouement at all! And as for Diane, the last you see of her is in a hospital bed when there's still nearly half-an-hour left to go! This ending really doesn't give a shit about the characters! But hey, it's a Chinese film. We're lucky the damn film even has ending credits!*

*From what I've read, it was Jackie Chan who popularized ending credits in China. Until then, all you'd ever get was a The End caption, then movie over.

The effects (largely present in the finale) are fantastic! You can really see the budget onscreen with this movie! For those who think CGI is superior to practical effects, watch Mr. Nice Guy's climax. Then go watch The Thing. Then Demon Wind....Ok, I know I'm giving you steadily declining-in-quality recommendations, but still!...

Aside from some product placement, there's a bad edit near the end with the two Demon henchmen. Are they shot, or shot at? The camera never even shows them when the shots are fired. I've no idea why-The film is already pretty bloody, I don't know how much a couple'a blood squibs would up the rating. The film also utilizes that cutting frames technique, which is a bit annoying. And speaking of editing, how is the evidence video tape edited?!

Overall, Mr. Nice Guy is ridiculously ridiculous, but fun. Now, if you'll excuse me, I've got some Alice Cooper tunes to listen too!...
Posted by Chris Hewson at 8:58 AM