Frogs (1972) [The Deadly Doll's House of Horror Nonsense's The Shortening] 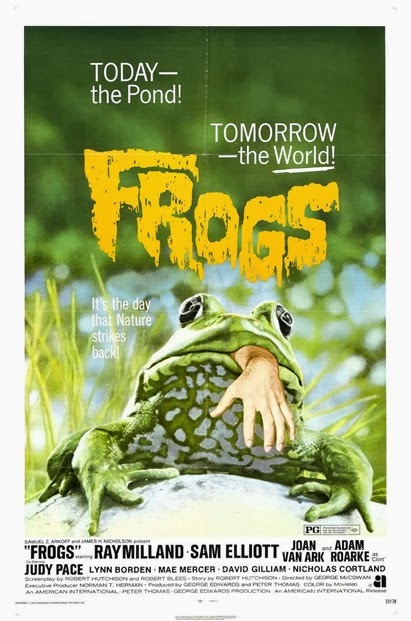 Frogs is a 1972 killer-animals film wherein nature is angry at us for what we've done to the planet, and wants us all fucking dead! Granted, I don't know why they're singling out humans-Nature is a dick to itself! 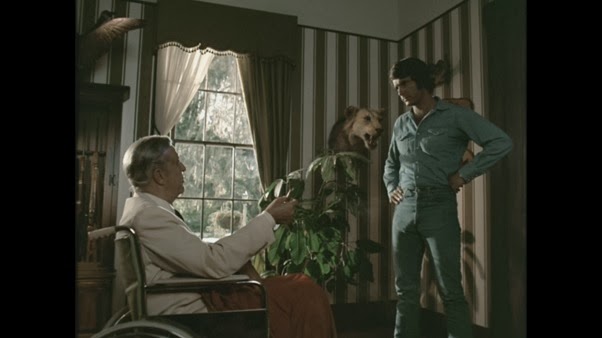 Freelance photographer Pickett Smith (Sam Eliott) is out in the swamplands/everglades of wherever, doing his job when siblings Karen (Joan van Ark) and Clint (Adam Roarke) accidentally knock him out of his canoe with their motorboat. They invite Smith back to their nearby family estate, where family patriarch Jason Crockett is celebrating his birthday.

Despite odd things that start happening, and the discovery of a corpse, Old Man Crockett is still dead set on going through with his birthday celebrations. The build-up of frogs is getting out of hand though. But there's no trouble, they'll be gone for migration by next year...if there is a next year... 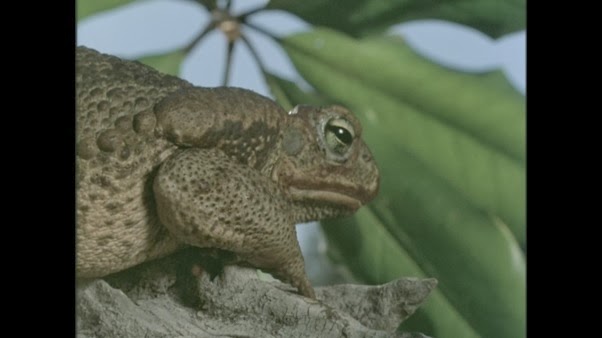 There's evil in his eyes...rr-r-ibbit DUN-DUN-DUN!

As hilarious and absurd as the idea of frogs killing people sounds, this movie doesn't pay off in that regard, but I still found Frogs to be an enjoyable sit. Unfortunately by the time the horror starts going into gear, the movie's almost over. It's not like the film's ever boring (to me at least), but I wish that the good stuff would have started sooner. Also...

...I wish the damn frogs actually killed people! They don't kill anyone! They seem to be in control of all the other animals (and apparently went for to the same supernatural electronics apprenticeship that Jason Voorhees took), but the only thing they do is ribbit around a guy until he falls over...wherein nothing happens to him! According to Wikipedia, said character has a heart attack, but there's no indication in the movie that that's what happens, especially since this character wasn't indicated at all to be Sweet Dee capable to heart attacks. 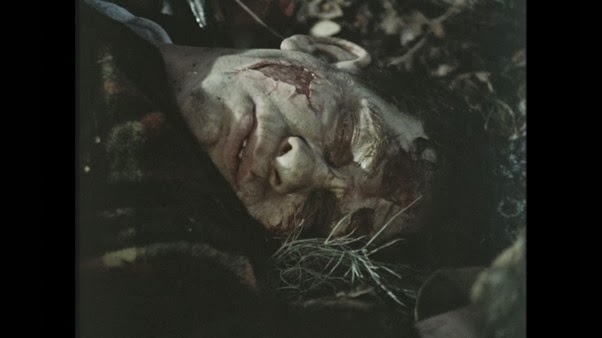 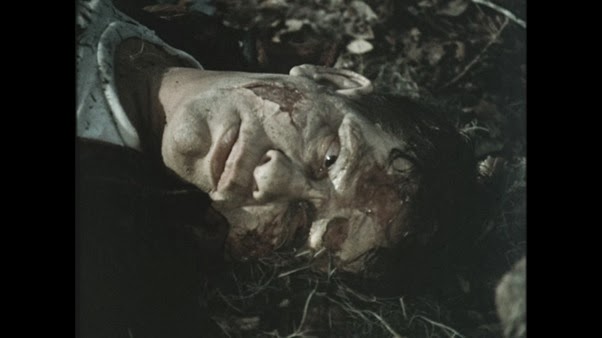 While I did like the movie, I agree that is is Ed Wood-ian at times, like with the constant shots of breathing corpses, people turning blue and rotting even though they've only been dead a minute, a fake plaster hand when someone gets biten by a snake, and the hilarious death scenes! Unlike, say, Plan 9 or Bride of the Monster though, the effects (that is, the animals) are all great! Nowadays, a nature-run-amok film would probably pussy out and go all CGI (There's no reason the makers of Life of Pi couldn't have vetoed spending several million dollars on subpar CGI in favour of just getting a trained tiger!), but here, the animals are all real, and they look great! And as far as I know, this movie didn't pull a kingdom of the Spiders and kill the animals for the movie. Though maybe the froggie cast members were afraid if such an eventuality, because most of them escaped during filming...Could it be they were massing to enact a real life plan of evil?!... 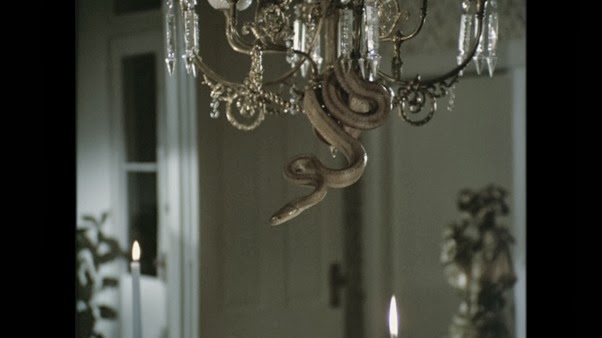 Like I said, the death scenes are pretty funny. In one, when running away, one character trips and accidentally shoots himself in the leg! Then he gets killed by evil moss that smothers him alive. And when another guy is in a greenhouse, a group of lizards knock down several glass jars of poison, creating a deadly cloud. Instead of just going to the door and, I don't know, opening it and leaving, he instead goes over to the fumes, leans down, and practically breaths them in as I can only assume the script said he had to try and fan it away! There's another which is so poorly staged that it looks like the guy is successfully wrestling the crocodile, rather than being rolled and eaten. 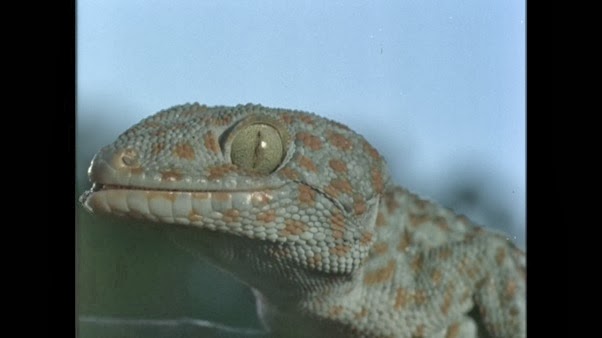 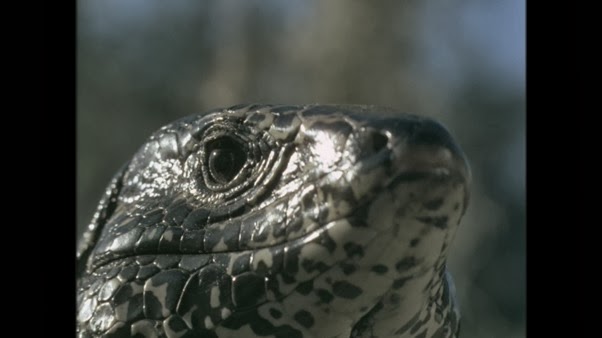 The characters here aren't exactly dickheads (well, minus Mr. Crockett) but they are pretty bland, and I can't say I went "GOOOOOSSEEE!! YOU WERE TOO YOUNG!" when they died horribly.

There are a group of characters near the end who go off on their own attempt to escape, and they're vaguely implied to have died, but it could be taken either way. 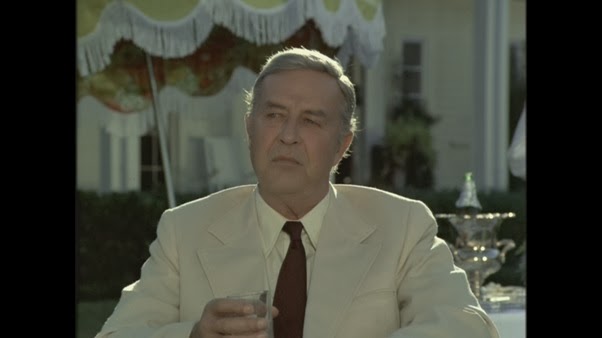 While the music can be a bit repetitive at times, Frogs has good scoring, which helps build up an eerie feel. It's just a shame that by the time 'eerie' stuff starts happening, the climax is already here, and BAMmovie over... The opening credits, which are of Sam Elliott snappng up picture of wildlife for four minutes, are boring at first, but they pick up when he starts taking pictures of various pollutants in the river, which is thematically nifty...and then it promptly gets boring again soon after, and stays that way. 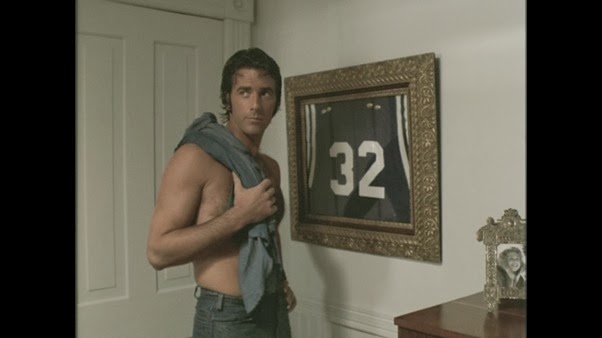 Sam Elliot is a decent lead, and shockingly doesn't have the bear known as his moustache on his face at all! Without it, his face, it...it doesn't look natural!

Joan van Ark is a good actress here, and she's super-hot!...And no, I haven't seen photos of her in recent years, with all the horrible plastic surgery she's gotten, nor do I plan on doing soWHOOPSTOOLATE! Dammit, van Ark, why couldn't you have aged gracefully?! 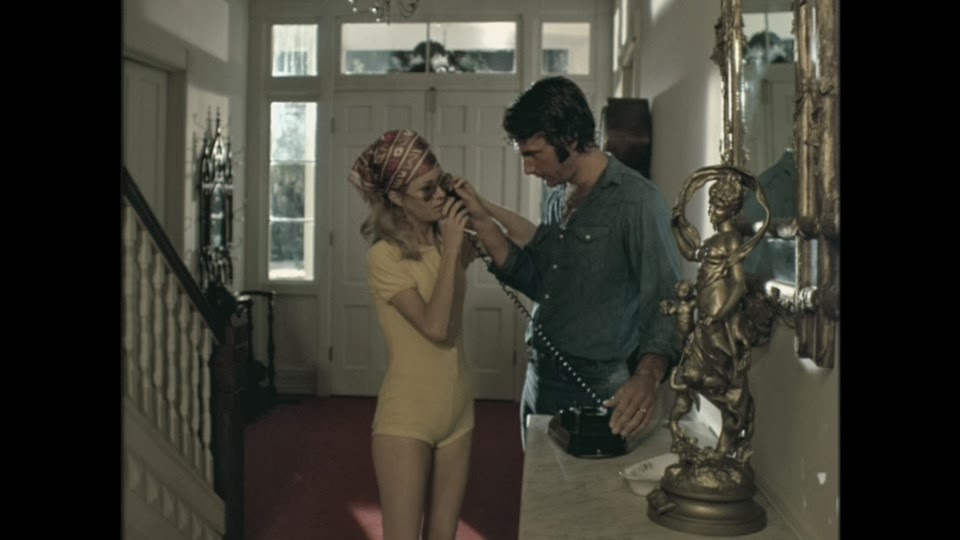 *By the way, when getting screenshots, I went scouring through this movie looking for a good shot of Joan van Ark's ass to snap up (I am a guy, yes), but unfortunately I couldn't really find any that made for good screenshots.*

Ray Milland is also good as the asshole alpha male, although he doesn't look old enough to be a grandfather of anyone over ten/fifteen, let alone thirty and over! The rest of the acting is decent. Nothing bad, nor was I ever annoyed by any of them.

I recommend Frogs. While the script is a missed opportunity, as is the lack of killer frogs, the film is still good for a laugh. So, to conclude, the moral of the day is be kind to all nature, all creatures great and small!...Except for snakes. Fuck them.

This post is for The Shortening, a blogathon set up by Emily of  The Deadly Dolls House of Horror Nonsense.
Posted by Chris Hewson at 5:16 AM