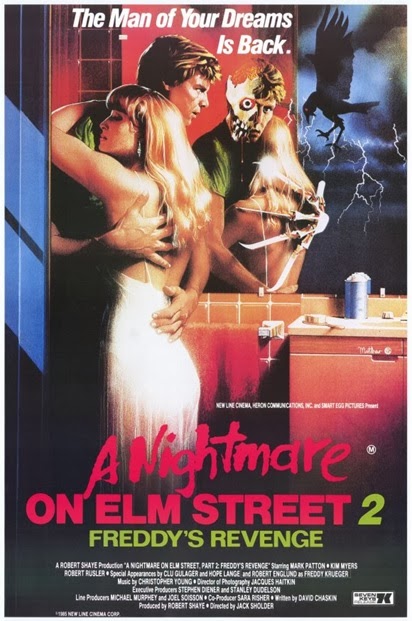 "Hey Cinderella, step in your shoe. I'll be your non-stop lover. Get it while you can. Your non-stop miracle, I'm your man. Get outta my dreams, get into my car"...Excuse me? What was I saying? Oh, A Nightmare On Elm Street! This is technically my first foray into reviewing this series. Technically in that I've reviewed two Bollywood ripoffs, but none of the official entries. Tonight, I'll be talking about second entry and series' black sheep, Freddy's Revenge... 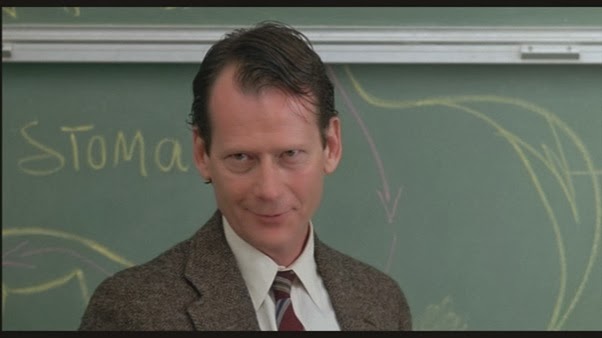 Teenager Jesse Walsh (Mark Patton) and his family have just moved into 1425 Elm Street, former house of Nancy Thompson from the first movie. Jesse immediately begins having nightmares about the sinister Freddy Krueger, who starts to take over Jesse's body...

This is a good horror film and a decent entry in the Elm Street franchise, and it got a pretty bad rap when it first came out.

There are very few dream sequences, which is the main reason why this is considered to be the black sheep of the series. While dreams are the staple of the series, I don't mind that this movie tried to be different, as that's always the better option than doing a xerox sequel. Pretty much the only dream sequence is at the start, with the bus. It's a decent opener, but a bit too over the top.

Freddy's Revenge is noted for is supposedly homoerotic subtext (with Freddy representing withheld homosexual desires). While the cast and crew deny this was the intent (the gay Mark Patton says "I don't think that Jesse was originally written as a gay character. I think it's something that happened along the line by serendipity."), one of the writers says that he deliberately put in the homoerotic subtext. The film is definitely homoerotic, and its themes would be good, but... 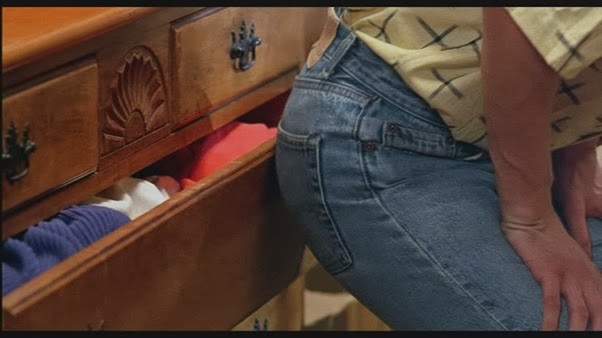 ...Unfortunately Freddy's Revenge suffers from what I like to call Dracula's Daughter syndrome. You see, Dracula's Daughter too was a film with homosexual undertones, but it was about the vampire trying to rid herself of her 'wrong urges'. Guh, goddamn 30's! The same thing happens with this film, as in the end, Jesse is broken free from Freddy's power by the love of a girl. *sigh*

The plot here is good. There are a few issues (mainly the forced 'love' aspect at the climax), and the movie isn't a total scarefest, but it definitely has a few scenes one would find creepy. 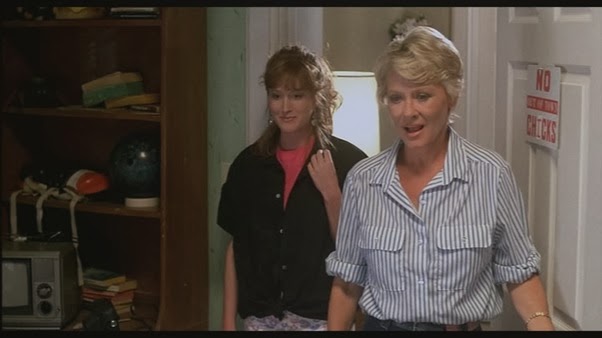 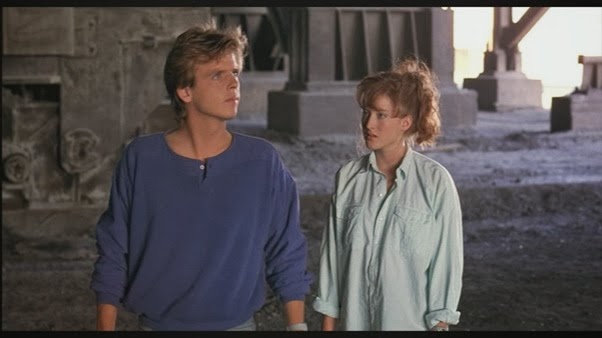 The acting's all good. Mark Patton is good, even if his character is a non-proactive whiner with a terrible haircut. Robert Ruster is good is Grady, and Meryl Streep lookalike Kim Meyers is the best actor in the film. not counting Robert Englund. That's not to say that say that she's amazing though, she's just pretty good. Clu Gulager is unrecognizable-unrecognizable because I'm an idiot who got him confused with James Karen (his co-star in Return of the Living Dead).

The standout is definitely Robert Englund. He isn't the joking clown Freddy here, he's scary demon Freddy who you really don't wanna mess with! No one-liners here. "You are all my children now!". 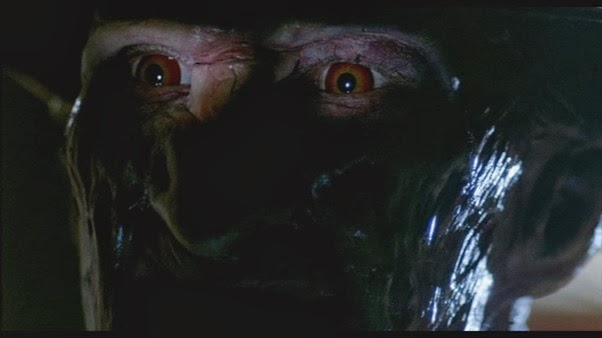 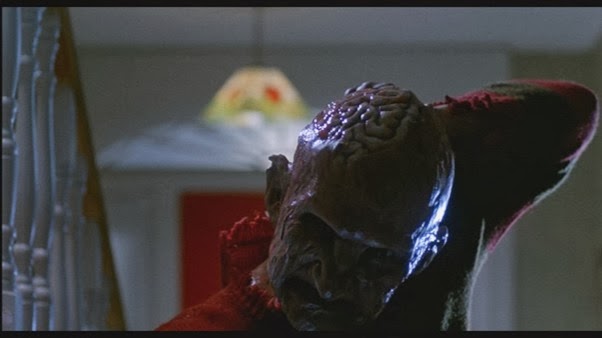 When it comes to screentime, Freddy's a bit of a double edged sword. On one hand, having Freddy only sparsely appear is effective, but on the other hand, 'He only appears for a few minutes in total?!'. Thankfully while he's not used a whole lot for a while, he gets plenty to do in the last half-hour, so he doesn't feel underused or wasted. 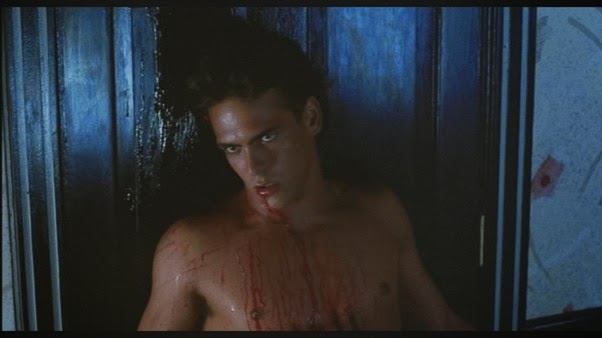 The effects in this movie are great! From Freddy's brain reveal, to when he forces his way out of Jesse, they're definitely impressive! The factory at the end also looks great!

There are a couple of confusing scenes, like when Jesse, unable to sleep, goes down to the kitchen, and lightning strikes through a window and shatters some dishes, then for no discernible reason, Jesse goes into town to an S&M club. Wha?! Speaking of weird, there's a big "ew! Ew! EW!!" moment at the end. You'll know it when you see it 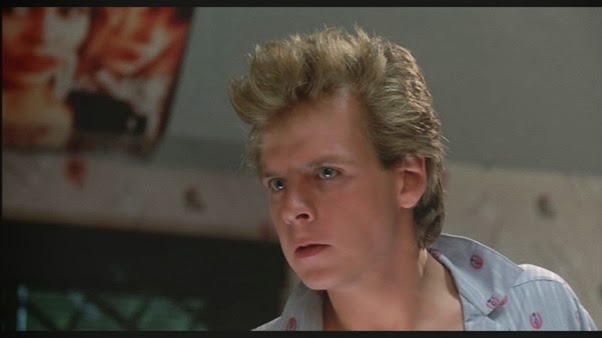 One part that had me laughing was Jesse's dance scene to Touch Me Baby by Wish. Also, Grady's 'Yeauh!' is a word I strive to use as much as possible!

I hate the ending. It's bullshit! For one, it goes from Jesse and Lisa hugging in the factory, then abruptly cuts to sometime later, and everything is better for some unexplained reason (granted, I'm sure the Elm St. police believe in Freddy, but any other cops who read their reports of 'ghostly slasher maniac'?!) and everyone's happy. Then there's an 'Oh shit, Freddy's not really dead!' moment, which makes no sense, as 1, Freddy just fucking died, and 2, the whole point of the ending was Jesse realizing this his fear was feeding Freddy's power, and him conquering his fear. But, uh, guess not, so says this pointless shock ending. 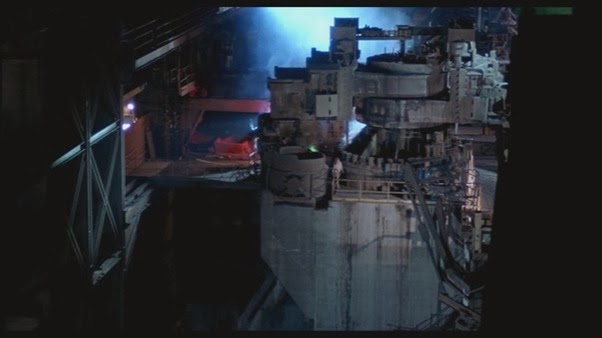