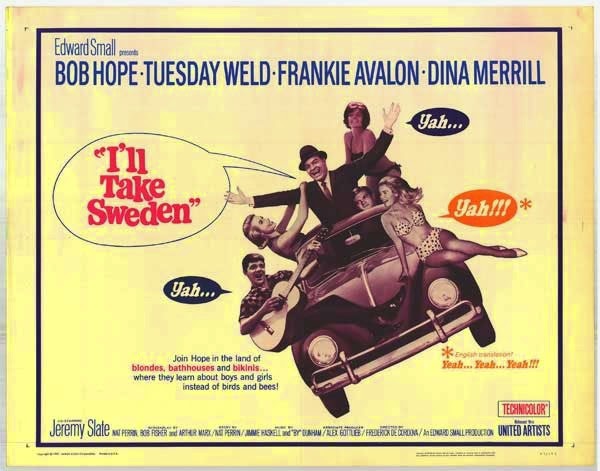 Bob Hope was one of the world's most well-loved comedians, and was in dozens upon dozens of great comedy movies, such as the popular Road To series. However, today I'll be looking at one of his more mediocre movies...granted, that's through no fault of him, as Hope is the only thing saving this movie from sinking!...

Bob Holcomb (Hope) is a well-to-do father, who disapproves of the company his daughter Jojo (Tuesday Weld) keeps-A beach party one. 'Worst' of all, Jojo is now engaged to Kenny (Franke Avalon), an unemployed partygoer musician whose home is a tiny trailer. Seeking to break the two apart, Holmcomb takes a company job that requires moving to Sweden, hoping that Jojo will soon forget Kenny. She does (in one example of the film's poor writing), as she soon starts seeing someone else, but the ladykiller Erik has other things on his mind, and soon enough, Holcomb is wishing Jojo was still with Kenny...

I'll Take Sweden is a mildly funny movie, mostly courtesy of the great Bob Hope, but the movie falls apart once the characters all go to Sweden about half an hour in, because of how much of a radical shift the movie goes through, and because it's at this point where you start realizing that none of the movie's characters are likeable in the slightest! They are all horrible people!

The last ten minutes of  I'll Take Sweden is the worst part of the movie. It's incredibly rushed, has a really weird scene involving a dick honeymooner and his hysterically sad bride that comes out of nowhere, and is never resolved or brought up again ( I can only assume the scene ended in suicide and/or murder!), and worst of all, it tries to play an attempted rape scene for laughs, even going so far as to have cheery sunny music playing during the scene!

To cap everything off, this is a very old-fashioned movie, and as far as it's concerned, if you have sex before you get married, you're committing a major mistake. This results in an ending that's so dated it's not even funny!

Speaking of not funny, there are a couple of odd scenes here and there, such as the final seconds of the movie (a weird freeze frame and confusingly out of nowhere dialogue), and a scene early on with a trucker who sounds like Donald Duck. One really strange part is when Mr. Holcomb find out that Kenny has taken Jojo out to a strip club for a date, and Jojo couldn't be happier! Jeez, I didn't know life was actually like a Virginia Bell burlesque routine audience!

Onto some positives, the acting's all good. Bob Hope is funny, like I said, as he delivers numerous jokes, and the rest of the cast do their jobs passably.

The soundtrack, mostly sung by Frankie Avalon in certain spots of the movie, is pretty good. The first two he does at the start are extremely enjoyable! The movie's theme sucks though. It's a decent instrumental with an occasional grating of "I'LL TAKE SWEDEN!!!!! JA! JA! JA!", but there's a proper I'll Take Sweden song performed by Avalon late in the film's runtime, and while it is enjoyable, I heard the "I'LL TAKE SWEDEN! JA!JA!JA!!" droning on every single ad bumper, (I watched the movie on TV) so I was hardly in the position to enjoy the song all that much. And finally, the opening credits version of the title song is bad, but it only has the occasional six word chant, rather than a full set of shrieking, painful-to-hear set of lyrics of the second version, which plays over the ending credits! Thank God films from the '60's didn't have stingers, so I could just flip off the TV then and there!

All the negatives to I'll Take Sweden make it a film I don't recommend. If it's on TV, and you're bored, sure, give it a watch if you want, but otherwise, there are funnier comedies out there, and most assuredly funnier Bob Hope ones to be seen...
Posted by Chris Hewson at 1:40 AM