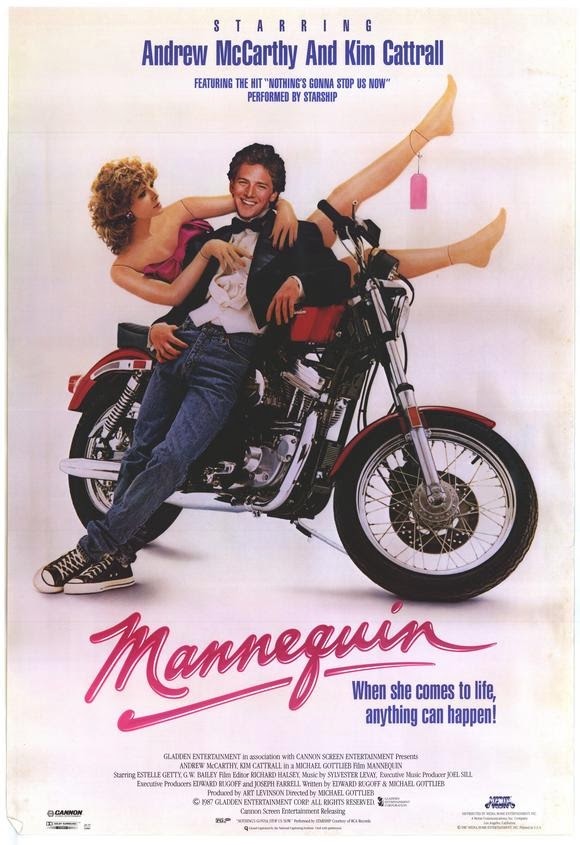 News which may come as a surprise to some, given this movie's dire reputation, is that 1987 romantic comedy Mannequin is one of my all-time favourite movies...Yeah. Between Grease 2, the Police Academy sequels, Can't Stop the Music, League of Extraordinary Gentlemen, and this, I have to wonder, do I just have the most unpopular opinions of all time?

Several thousand years in the past, Emmy (Kim Catrall), a young Egyptian woman, is being forced into an arranged marriage by her mother. The free-spirited, inventive, and adventurous Emmy pleads to the gods to get her out of her life, and just that happens as she's flung through history.

In the present day, Sculptist Jonathan Switcher (Andrew McCarthy) can't keep a job down, always getting fired for various mishaps, much to the chagrin of his exasperated girlfriend Roxie. One day, Jonathan passes by a department store-Prince and Company, storing a mannequin he specially crafted in its front window, and when he later returns, the wire holding a heavy sign being hoisted up snaps, and Jonathan quickly pushes Claire Timkin (Estelle Getty), the store's owner, out of the way. She offers him a job immediately, and he works as a stockboy until one night, his mannequin comes to life as Emmy. The two are instantly smitten with each-other, however she reverts to being a mannequin whenever anyone else other than Johnathan sees her.

With Emmy's help, Johnathan constructs an extremely popular store window that not only boosts the failing Prince and Company's sales, but also boosts his own position, as he's promoted to visual merchandising. Not everyone is pleased by this however, such as rival store Illustra, the recently dumped Roxie, and their plant in Pince and Company-The vice president Richards (James Spader). Now all 'agents' from Illustra are intent on either bribing Johnathan to come work for them, or stealing his work instead...

Mannequin is a pretty simple movie, all things considered, but it's an entertaining romance, and well worth a watch! It's not a great movie technically, but it's one of my favourites for a good reason! I just enjoy it so much!

Good romance is obviously key to any movies of the genre, and Mannequin does well. While it starts pretty abruptly, the romance between the two leads is cute, and well-handled. We see the two characters have fun together, enjoy each-other's company, and you know what? There's no third act breakup! I am not joking! No pointless arguments, forced split-up, and miserable moping for twenty minutes. Instead, Jonathan and Emmy are happy for the entire runtime. There is drama, but that's because of how Emmy feels about her limitations, what with being alive only when alone with Jonathan.

The acting is all very good! Andrew McCarthy is one of my favourite actors, with very good reason! The man can really play a varied range of different characters in various films, and here is no exception. As for Kim Catrall, she is adorably gorgeous!...So it's a shame I don't like her. I should specify-I like her plenty here, and in Big Trouble in Little China, but the only other thing I know her from is being a bitch in 94 episodes of Sex in the City. To any of my readers unfortunate enough to have had to sit through that show, I apologize for dredging up bad memories. Hollywood Monroe is a love him or hate him character, and is pretty stereotypical, but not negatively, which is good. I personally find him to be very amusing, and Meshach Taylor does a good job. Estelle Getty does well, and I'm definitely glad that she's a boss who's likeable and is never angry at, or at odds with, the main character, which is another cliche I've seen time and time again be left in the dust by this movie.

While a line here or there isn't acted perfectly, Carol Davis is good as Jonathan's girlfriend/ex Roxie, she's actually a pretty well-rounded character, which is highly enjoyable. While she is a bitch, the reason why she tries to have the mannequin Emmy destroyed is something very understandable and human. James Spader is amusing as the kiss-ass Richards, and finally, G.W. Bailey (most famous for playing Captain Harris in the Police Academy series) is a bit grating, but he's not horrible, and he's good at playing crazy. I'd like to see a version of Maniac starring him!

The soundtrack is fantastic! Full of great, and very '80's-ish tunes, Mannequin is perfectly complemented by its score, and when Starship is playing over the ending and credits, I defy you to not have a huge grin on your face!!

One last thing to note is the opening credits-They're actually a stylised credit sequence, rather that regular text over the movie. I appreciate the thought, but not so much the subpar illustration.

To finish, I don't think I have an unpopular set of opinions, nor do I see films like Mannequin and Grease 2 as guilty pleasures. I really love these movies, and they'll always be personal favourites. No, Mannequin isn't an amazing movie, but it's thoroughly entertaining, and, to me at least, completely undeserving of such a harsh reputation...
Posted by Chris Hewson at 7:54 AM