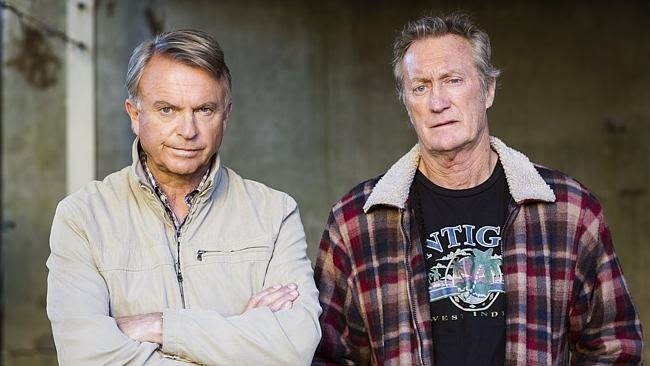 Old School is a 2014 crime miniseries starring Neill and Bryan Brown, as a crimebusting odd couple...

Ted McCabe (Neill) is a retired cop with a burning desire to uncover the culprits behind a group of thieves who shot him during an attack on the Sterling-Nickle gold coin deposit. One of the thieves, Lennie Carl (Bryan Brown) was caught and jailed. Twelve years later, he's released, and tries to reconnect with his now collegiate grand-daughter Shannon. Things go very wrong, however, when an old friend and associate in the Sterling-Nickle job is killed, and Lenny falls in with Ted McCabe's investigation, and the two reluctantly work together to find the mystery members of the Sterling-Nickle job...

This is a mostly pretty entertaining series, which I first caught on TV at the halfway point...I shoulda kept it that way, as the first half leaves a lot to be desired!

The first half of this series is comprised largely of filler episodes, while the last few are solely to do with the central arc. This structure doesn't do the show any favours, as you want the show to hurry up and get on with the main story, rather than dilly-dallying with superfluous other stuff.

Another annoying aspect of the show is how every major development in the case leads to said uncovered bad guy getting killed at the end of practically each episode! It gets old fast!

My least favourite episode is the second one, which is...not boring, but not particularly entertaining, either. Nothing is accomplished. The ending, however, completely took me by surprise! Another not so good episode is the third, solely because of what happens late on, with 1, Lennie taking Shannon's money, and 2, the dog he's keeping in her house tearing everything inside up, including a beloved heirloom from her dead mother. Hey episode, you forgot to include a scene of burning orphanages and baby tears! Once that scene happened, I lost all interest, and skimmed through the rest.

The acting's all good. Ted McCabe is a pretty meh lead, but Sam Neill still turns in a very good performance, which should be obvious, given he's Sam Neill. Lenny Carl is a pretty unlikeable sack of crap, but is played well by Bryan Brown. Weirdly enough, the series is inconsistent as hell with Lenny's surname! You'll note that I said it's Carl, but it's apparently (that is, according to IMDb) Cahill. Either I'm an idiot who didn't pay enough attention, or cast members revolved from saying it as Carl, to Cayle!

As for Shannon, and Jace (a sort-of friend of Lenny's), the romance between the two is decently handled, although you'll want to reach through the screen and yell at Shannon for dating Vince Palagetti, the obviously scummy mobster, for half the series!

Now, onto the series villains. Vince Palagetti is a pretty boring, one-note bad guy, and his exit from the series is really abrupt. As for one of the main villains, he first appears in the penultimate episode, and he's quite good. Unfortunately, the final main villain only has a couple of scenes at most in the first half of the series, and doesn't appear in the second half at all until the finale! Since I watched the series' first and second halves out of order, the first time I saw this guy was in the last episode, and I thought I was seeing him for the first time! BAD WRITING!

Police chief Mal Dwyer has a real grudge against Ted, and it's annoyingly unexplored. In the last few episodes, Ted begins to think he's crooked, and one of the Sterling-Nickle crooks, but that goes nowhere. He finds clues leading him elsewhere, and Dwyer's possible crooked nature is literally never mentioned again! This'd be ok if there was a Season 2 on the way, but I really don't think so. This series has its share of filler eps, but it's largely just the one story. And Ted's wife Marg was just about ready to temporarily leave him because of his continuous obsession with the Sterling-Nickle job, even saying that once its over, she's unsure if she'll still stay with him, as he might just find another case all over again. With that attitude, there's no real wiggle room for him to solve more cases in a season 2. And besides, if Mr. and Mrs. Murder didn't get renewed for a second season, then why the hell do you think this would? And of course, wouldn't you know it, the series ends on a cliffhanger!...

The main theme, along with the opening credits, is pretty good. The soundtrack for the rest of the series doesn't fare so good, as musical cues are constantly re-used  in all the episodes. Never enough to get tiresome, thankfully, but it's still very noticeable.

While watching the 2003 movie may be six hours shorter, I still definitely recommend Old School, although you may want to skip the whole first half and just stick to the latter-It may be a better experience that way. Either way, it's a decent and entertaining series, with two great leads, and well worth a watch...
Posted by Chris Hewson at 10:06 AM