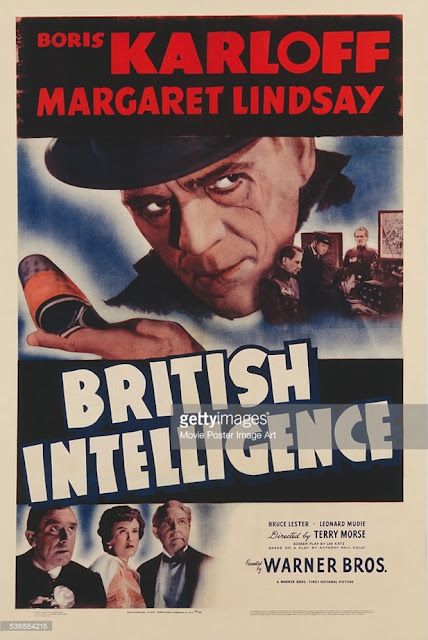 I've made it a mission in life to watch every movie Boris Karloff was in, and today, that goal has taken me to the 1940's wartime thriller British Intelligence...
During World War I, a German spy named Helene van Lorbeer is enlisted by her government to infiltrate the household of a British official, and steal sensitive information in order to aid the German cause. She meets up with a fellow agent, the butler Valdar, but he may be more than meets the eye. Then again, so might Helene...

British Intelligence is a decent watch, though its pretty standard nature, and at times overcomplicated plot drag it down. 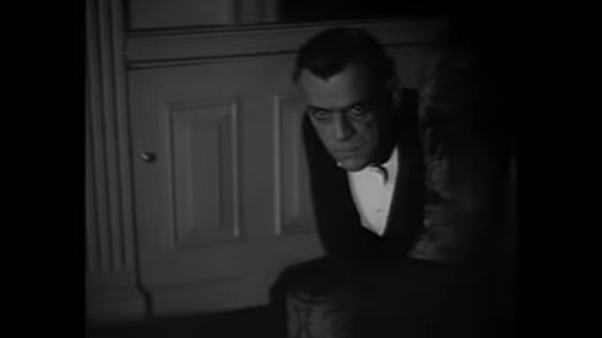 The characters are ok, and none are unlikeable, save for those who are intentionally so. Helene, aka Frances is the lead, and its neat watching a movie like this from the perspective of the villain...Or at least it would if not for the incredibly abrupt and pointless twist, which I have to wonder was studio mandated. = that brings me to something about British Intelligence that I found quite unexpected! It opens with an aerial battle, and the young strapping dude Frank Bennett is downed, ending up in hospital, where he instantly professes his love for his nurse, Helene. I was fully expecting this dude to be the lead, and would sway her to the side of good with his handsome good looks, and rugged masculinity, but he actually never appears from that point up until the 48 minute mark! Then he meets up again with Helene, and we have the scene we were long expecting...and then almost nothing comes of it. He only appears after that in the background for a few seconds at the very end, and the budding romance between the two is never really followed up on. He was just smitten with her from seeing her in the hospital, I suppose we're to infer she feels the same way, and despite only having two short scenes together, they're suddenly an item come the end. One last thing to note about Frank is that he actually seems quite flamboyant at times, without snide comments or jokes at his expense, which is interesting for a movie from this time. Or hell, a movie from now! 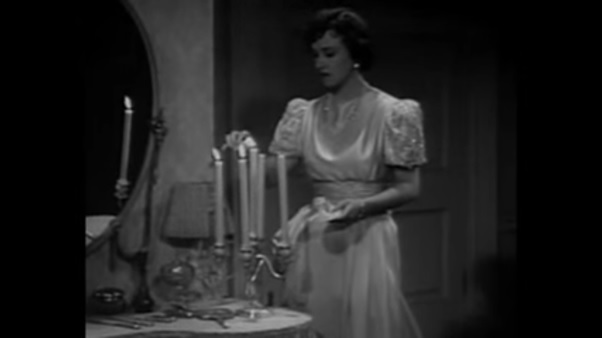 While it trods along well enough, this film ends up becoming needlessly confusing, and climaxes very abruptly. Rather a shame, really. British Intelligence's hour long runtime actually didn't impede it at all, until its final five minutes. Then it completely falls apart. Allegiance switches four or five times, a bomb that was meant to destroy an entire mansion and all of the British cabinet is out of harms way simply by throwing it out of the cellar door and into the garden, where it creates a small puff of smoke, and nothing more.

There's also a poor presentation of a twist reveal at he midway point. The problem is that it's very casual. There's no musical sting, and not even so much as a dramatic camera angle. Karloff's character just walks randomly into the room, and starts discussing British intelligence stuff with Bennett and co.

The acting here is all good, with Margaret Lindsay carrying the film well. Boris Karloff is of course the MVP, and he portrays an intimidating villain, whose side you're never sure is on. 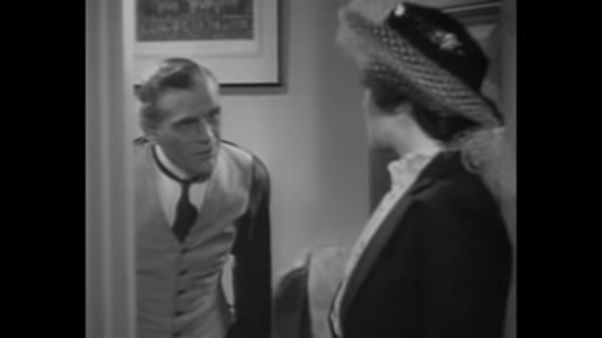 The effects here are quite good, with decent integration of stock footage, for the most part. The finale's  blitz is REALLY well handled, especially for what I presume was a low-budget movie! The whole climax has a great atmosphere.

One last thing to note is something mentioned on the film's wikipedia page, which talks about there being a comic relief scene at the start of the film with a bumbling corporal bearing a 'startling resemblance to a certain Nazi dictator'.  I haven't been able to find a source for the quote (which is on numerous websites describing British Intelligence, and seemingly attributed to a New York Times article that doesn't seem to exist much), but I can tell you for sure that it is bullshit. Nevermind that this is a British production*, not American as the quote claims, there are zero comedy scenes, and certainly no goofy Hitler analogue! The entire film is a serious WWI picture!

*Well, I think it is, anyway. It's got an American Director and Producer, but a very English plot with the entire cast made up of British actors? It's doubtful that this movie is American. Backed by an U.S. company perhaps, but a British film nonetheless. 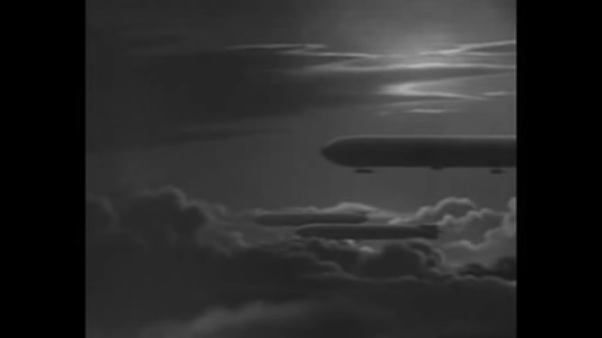 Just a couple of things to note about the dialogue. There's one very strange parting line Frank gives his war buddies-"So long, you creepy lizards!". Well that's one way to say goodbye! Another amusing thing wasn't the movie's fault, but mine. I didn't hear the end of the line I've got to call the war office, immediately". I instead heard it as "I've got to call the war off, immediately". Funny how the simple lack of three letters can so drastically effect a sentence! Finally, there are a couple of patriotic mini-speeches, the first of which is actually quite good!

British Intelligence is nothing special, but it's an ok enough flick, and anyone who's a Boris Karloff fan is gonna watch it, no doubt, and there's certainly enough of him to please such people (of which I am one)...
Posted by Chris Hewson at 9:38 AM