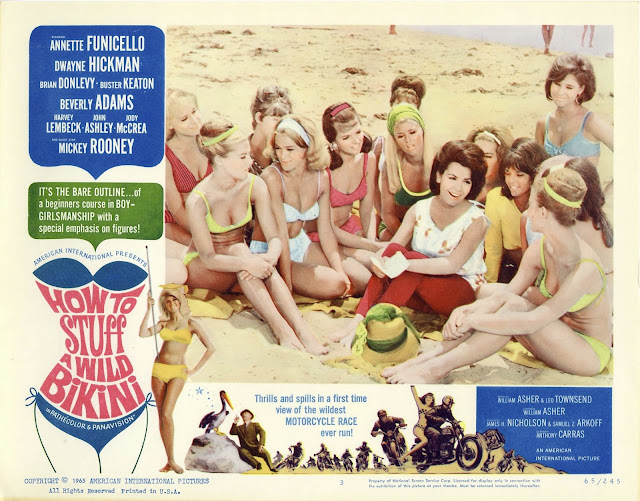 Good evening my friends, and you are all my friends. For your consideration, we shall today, on this prestigious April the 1st, be looking at the artistic merits of the unsung classic How To Stuff a Wild Bikini. Hark, does that appellation not doth give you chills?

Beach enthusiast Frankie (Frankie Avalon) is out in South East Asia on navy reserves, where he's banging every native girl with a pulse, yet doesn't want his girlfriend Dee Dee cheating on him, so he goes to a witchdoctor Bwana (Buster Keaton), to get a spell done to make sure that no man goes near Dee Dee. The spell takes the form of Cassandra (Beverly Adams), a beautiful, yet clumsy bombshell, who's meant to distract all men from Dee Dee. The plan would work, if not for ad exec Peachy Keane (Mickey Rooney) discovering her and hiring her for his new girl next door ad image. A worker for the company, Ricky (Dwayne Hickman) is attracted to Dee Dee, and the two hit it off really well. Meanwhile, biker and head of the Rat Pack Eric von Zipper (Harvey Lembeck) falls for Cassandra, and as the two team up, they and Ricky and Dee Dee are in for a motorcycle race to decide the girl and boy next door...

The subject for tonight's essay shall be on the somewhat precarious mental state of one Eric von Zipper. Despite his mean biker-ish exterior, he's really a big huggably wholesome man-child in a sense, and perhaps this contradiction is a good showcase of his fractured and splintered personality. Never lucky in love, and not seeming to have found the right path in life, he ends up meeting his dream woman-Cassandra. She is everything he thinks he wants in a partner-Stunningly beautiful, smart, and klutzy just like him, but never while with him, because their natural clumsiness cancels each-others' out. It truly sounds like a match made in distant Aidenn, but alas, the problems are apparent with Cassandra's true nature, and that is she doesn't really exist...

Cassandra's secret is that she isn't really one with our physical plane of existence. I know this may come as a shock to those of you who saw the movie and didn't pick up on this, but bear with me. Let's start with the pair's first meeting. From the first moment he sees her, von Zipper joyously declares that she is his idol. Why would he say such a thing when he's literally only just met her? Simple. He does already know her in a sense, in the respect that she's always been a part of his subconscious.

There's further evidence of her nonexistence, such as how she pops in out of nowhere, following her bikini by only a few seconds, or how she makes very little impact on the plot herself but rather events unfold around her, almost like she's not really there. And then there's the climax, and THAT'S why von Zipper is disqualified at the final bike race! You see, I thought it didn't make sense that the race for who gets to be the girl next door is contingent on the man winning the race, and if the woman is riding while their bike passes over the finishing line, they instantly lose! That's patently unfair! What monstrous sexism...Or is it! You see, if Cassandra never really existed, then of course Eric didn't win, because if the nonexistent Cassandra was riding it, nobody was, and thus he was declared ineligible. 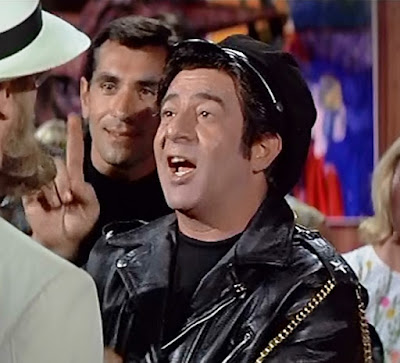 'But how is any of this possible?' you ask, 'Cassandra clearly has a physical presence on this realm, as she was noticed and picked up by Peachy and co., and she's briefly with Ricky at the end. Well there's a simple explanation. Eric von Zipper's delusions warp reality! 'Of course!' you say in a startled tone, 'It all makes sense now, like a jigsaw puzzle expertly coming together. Why the gosh hell didn't I think of this before?!'. I don't blame you. This is challenging stuff, and hard to take in on first viewing, but there's clear evidence of it. And this is a film set in a universe with magic, as well as ghosts, aliens, and mad scientists so it's not too out of the ordinary.

Another question you may have is 'How can these events be reconciled with Cassandra clearly being created by Bwana?' Well that's simple! That's all a delusion by Deedee, who subconsciously wants to imagine her boyfriend Frankie is being unfaithful to her despite a complete lack of evidence. She chooses to imagine that fiction to feel good about finding another partner, and the magically appearing Cassandra fits right in with that worldview. How about Frankie magically appearing to her at the end? Well that too was imagined, and that along with her breakup with Ricky was her way of coming to terms with accepting that her boyfriend is worth holding onto, despite whatever hardships the couple face. As for Cassandra, she vanishes on Ricky at the end despite Bwana specifically saying that wouldn't happen! If Bwana himself is only a figment of Deedee's imagination, that contradiction suddenly makes perfect sense!

Back to Eric von Zipper, we see more of the discontent he feels when he strives to change his image and be a new man, dressing up in very classy businessy attire and trying to act civilized. His friends are shocked and dismayed at first, but keep faith in him, and soon join in, if only to help Eric feel good about himself. The unconscious desire von Zipper has to be someone else is key to his mental roadblocks. He's displeased with the way things are, not because anything's actually wrong, but because he's not sure if it's the right path, and he's anxious the bottom will all fall out, so he constructs this new identity, with the catch-line of "If there's an image to preserve..." then it's this new one, trying to delude himself into being someone and something else. There's still a lingering sense of doubt though. 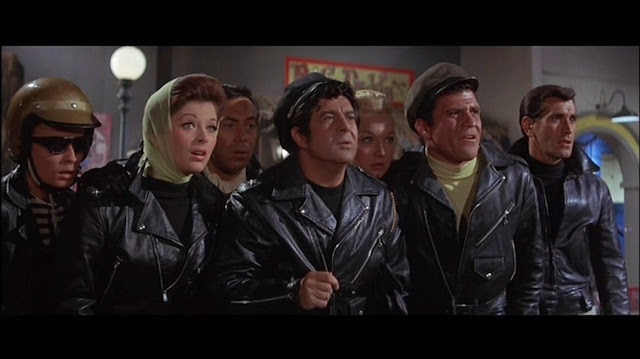 Now we come to the finale, once the race is done, and the race is lost...but all is not lost for Eric von Zipper, as he has finally made the key internal realization, and is happy. He discovers that Cassandra isn't the one for him. In his own words after they lose the race, "Don't feel too bad about this, young lady, because you're gonna go a long ways", and she responds with "Farther than you think.", "Only I ain't gonna go with you.", "That's what I meant". The meaning is clear. Being part of his subconscious, Cassandra already knows of his intentions and is at peace with them, and the couple amicably break up, knowing they simply can't be together forever.

Having faced up to his insecurities, Eric rediscovers his own self worth with the epiphany of "I am my ideal, and the Rats are my idols". von Zipper realizes and admits to himself that his delusions of romance aren't necessary, and not only is he already a complete person unto himself, but he's got a band of 7 loyal and faithful friends he can always rely on. Plus, two of them are female, so he finds out the reason he's unlucky in love has nothing to do with how the fairer sex views him, but is rather just bad luck-Bad luck he knows he will one day overcome.

Eric von Zipper has not necessarily led an easy life a times, but it's the road he chooses to tread, and he does to in the company of true friends. May we all be as lucky as this roguish rapscallion and his revelous...band of compatriots!

In closing, I hope this most illustrious essay has helped to inform any of my readers about the true meaning behind this entry in the 60s beach movie canon. I am here to serve and teach, now and always...
Posted by Chris Hewson at 9:53 AM