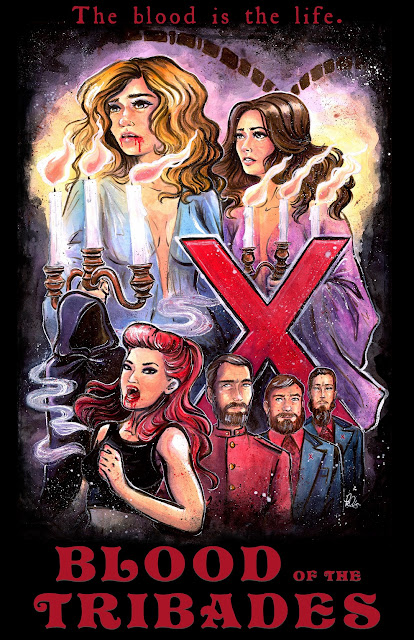 If there's one thing the world can't get enough of, it's Jean Rollin movies, and ones inspired by his works! Today I'll be looking at the new Canadian homage Blood of the Tribades, and see if the blood is indeed the life (and later on read other reviews, and realize I probably wasn't the first by any means to make that joking send-off remark)... 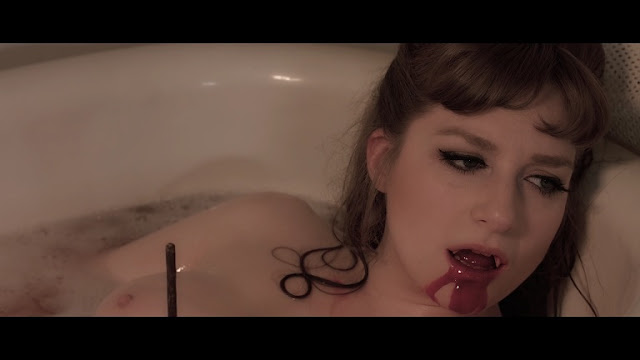 In a strange world, 2000 years after the great vampire god Bathor blessed the land, things have gone wrong. The men have taken control and perverted the word of their god, using it to subjugate the women and slaughter all they deem unfit in the eyes of Bathor. Struck by mysterious disease, they swear to not rest until all 'sinners' are gone. Elsewhere, in a communion of women lives two young women, Élizabeth and Fantine, who manage to escape the hecatomb brought by the men, with the help of a group of liberated female vampires who have been biding their time for 2000 years for a singular purpose...

Blood of the Tribades is quite an interesting film! The plot is a more low-key one, and it's often vague, but never to the point where you don't know what's going on. I partially wish we'd know a little more about what was going on as these characters inhabit such a fascinating world, but we learn juuuust enough to sate us. Barely though! I'm glad we learn what we did, otherwise I'd be pissed! 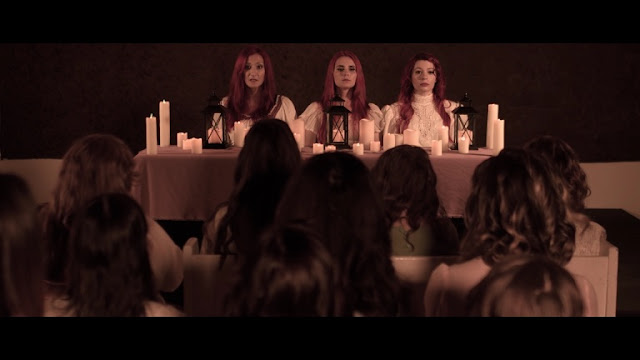 This movie is beautiful! Utilizing both the beauty of natural locations mixed with secluded and sometimes dilapidated older buildings, Blood of the Tribades looks truly stunning, and in this you can definitely see the inspiration. Jean Rollin's movies get lots of flack, but a lot of that I feel is unjustified. The guy's direction and eye for visuals was marvellous and breathtaking, and that's at least worth something. It's lovely to see that there are people inspired by his movies, and enough to make their own like them, rather than just hate on them. 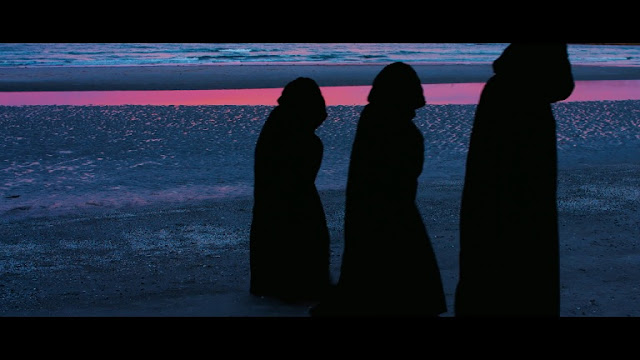 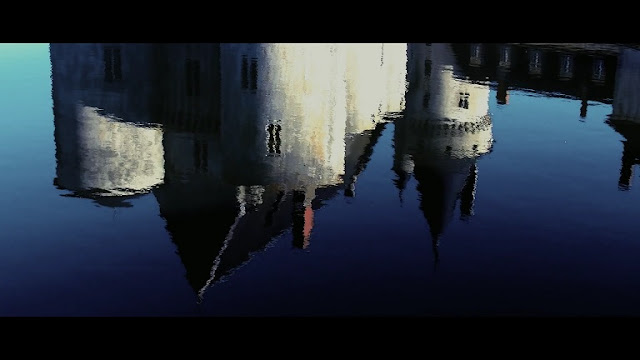 The characters are interesting, though the vague script leaves them somewhat unexplored. We get a little interesting history, and see that the vampire women have lived for so long but forgotten much of their lives as they suffer in complacency, their true lives shrouded in a fog of lost memory. Great stuff, but perhaps the two female leads didn't get quite enough to do early on. Thankfully they make up for that in the last act. As for the remaining characters, the two liberated women were good, but a bit underwritten/unexplored. The twins were a super fun addition, too! My favourite characters in the film by far.

The villains were definitely an uncomfortably realistic bunch of monsters, and well-deserving of whatever gruesome fates might befall them. I did find it pretty groanworthy that they were so eager to kill their own dwindling members for the most minor of infractions, but that's not a mark against the movie, as religious zealots are indeed fucking psycho idiots. The cured guy, however, was terminally stupid for his actions! 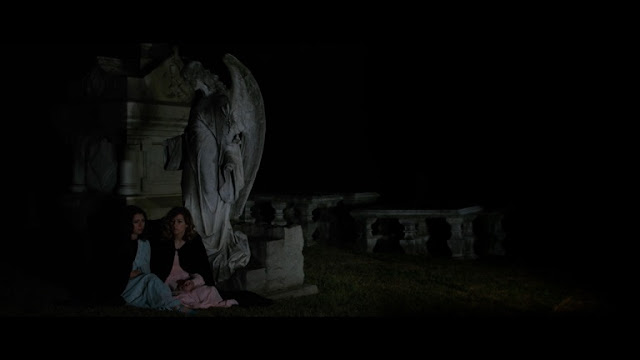 There are some interesting themes here on identity, and feminism in the face of internalized misogyny. All in all, this is not a happy story by any means. This doesn't make it hard to watch though. It's just a bit depressing at times, and getting attached to any characters is a bit risky.

The film's catchphrase/mantra of 'The blood is the life' is an oft repeated one, but never to an annoying degree, and never becomes too repetitive, though it comes close. Other dialogue is well-written, and aaaalmost comes across as sounding pretentious, but not quite, and is nicely evocative.

The effects present are mostly really good! The fangs are convincing, and not akin to paper. There's a fantastic eye slitting sequence that's only sliiiightly undercut by the Wilhelm scream. That didn't amuse me very much, though your mileage may vary. One effect I was almost ready to criticize was a scarring one, where it just looked like the actresses were smearing fake blood on their bodies with a knife and calling it a wound...But then blood emerged from the fresh 'wounds'! Either they really cut themselves, or that was a really convincing effect! I'm curious how they managed it. The same is true for many of the other effects, including the diseased make-up for the men. There's a little CGI in a couple of scenes, and it's not too bad, or very distracting. Noticeable, but not distracting. 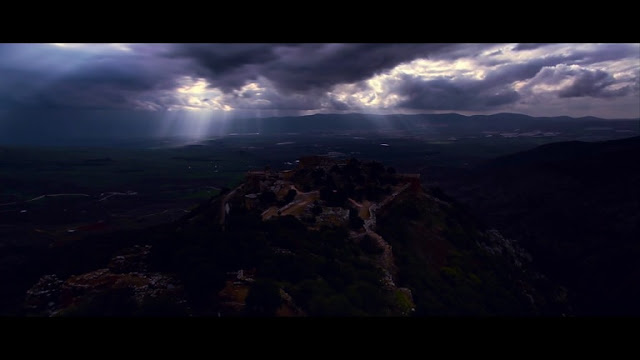 My biggest grievance with the film if you could call it that is the movie being in English, and with Canadian accents to boot (it sounding mostly American being the issue), but even this didn't bother me much, partly just because I got used to it, but mainly due to a very interesting linguistic shift halfway through the movie!

The acting in Blood of the Tribades is mixed. Some of the performers are really good, such as Seth Chatfield as the lead antagonist, Tymisha 'Tush' Harris, and I quite liked Simone de Boudoir. Chloé Cunha and Mary Widow carry their parts well. Other performances aren't quite as good, with somewhat kinda sorta...unconvincing deliveries, but none of them are that bad.

Writers, directors, and producers Sophia Cacciola and Michael J Epstein do a great job on all grounds, with the direction being impressive, and showing great visuals in many places!

Musically, this is very good! The score is a subtle one, but with many nice tracks, and general spookiness, and ethereal...ness. 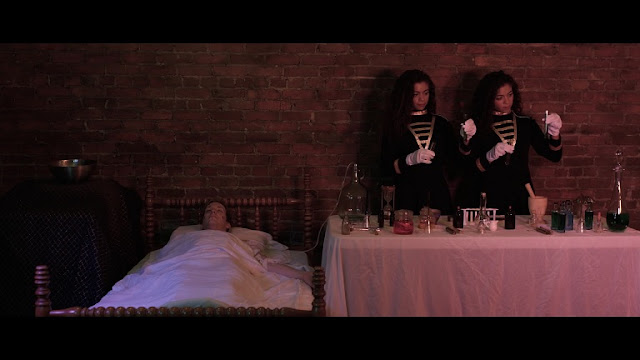 Being inspired by the lesbian vampire fare of the 70s, there's an abundance of female nudity, and full frontal male nudity too! How often do you EVER see that? Forgetting Sarah Marshall is the only example I can think of where a mainstream film showed that, and I'm surprised that movie even managed to without being shot down and cut by the U.S. censors (because apparently those assholes are still around). Anyway, back to Tribades. It's cool seeing equal opportunity nudity in film, and this is a quality this shares in common with Jean Rollin movies. I'm definitely glad for its presence, because male nudity should be normalised in cinema.

The poster to this movie is a neat one! Not an artstyle commonly seen in film posters, but good nonetheless, depicting the film's imagery and characters well. I also dig the scratchiness, and the familiar font of the title. 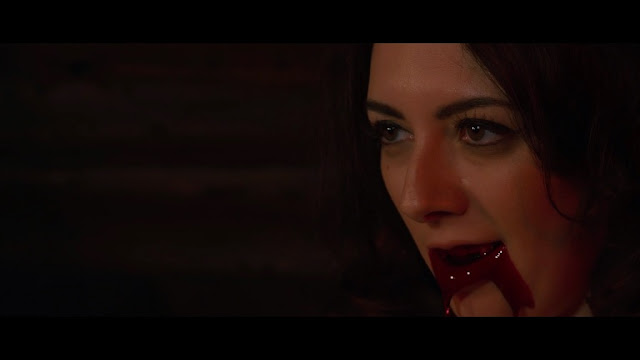 To finish, Blood of the Tribades is a really good movie! Not without some flaws, but the positives most certainly outweigh them, and I'm very much looking forward to what Sophia Cacciola and Michael J. Epstein have done in the past, and what they'll do in the future...
Posted by Chris Hewson at 10:55 AM