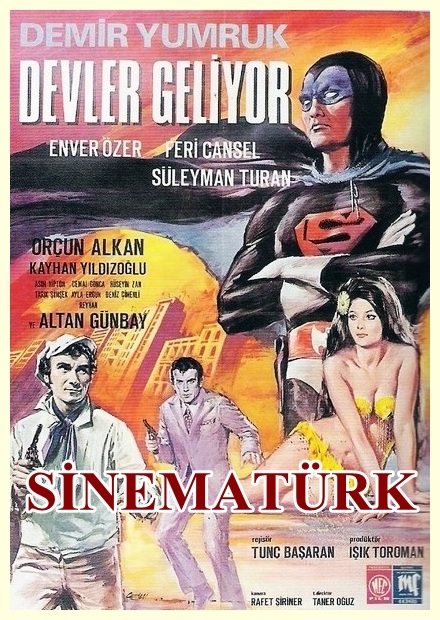 Policeman Enver, his girlfriend Meral, and friend Orhan, are investigating two nefarious cadres of villains trying to locate a hidden store of uranium. Also becoming involved in the search/quest for justice is Murat, son of a murdered archeologist. Together, these four heroes must defeat the evil Zakoff, and Fu Manchu, before Turkey is taken over, the world to follow!... 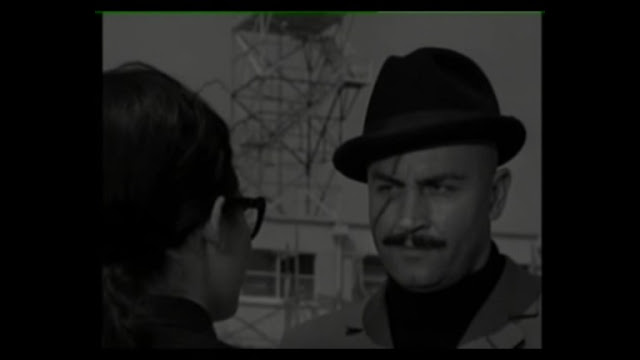 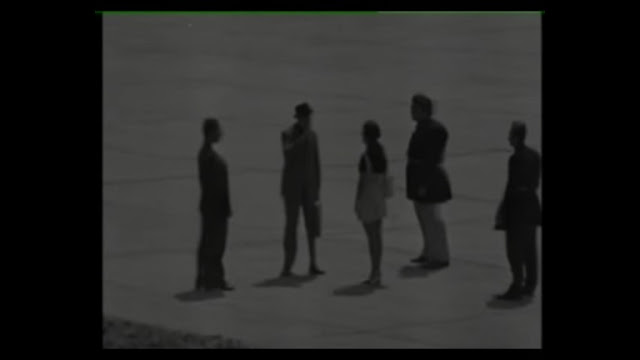 Demir Yumruk: Devler Geliyor, aka Iron Fist: The Giants are Coming is a gloriously pulpy action flick, telling a brief but mostly satisfying story of revenge and superheroics. The film sits at a snug 70 minutes long, and doesn't wear out its welcome, is relatively easy to watch in unsubtitled Turkish (*raises hand*), and hosts plenty of cool visuals, from Fu Manchu's traps, to the gas mask henchmen, and more that I won't spoil.

The plot is where Demir Yumruk kinda falls down. Even knowing the plot is about these parties searching for a cache of uranium, that doesn't make the events much clearer. In fact it actually seems to muddy them up even more. Why are there coffins with large crucifix segments, decoy coffins in the ocean, secret priests, and a cave the secret cross doesn't lead to, containing a second-hand knife stuck into a wall, that once removed causes a cave-in, and that's it. I'm not sure if understanding the language would make this plot any clearer! Moving on to the biggest issue with the plot is how the second half is a rather endless cycle of the characters being kidnapped, escaping confinement only to immediately be captured by the other villains, escape again, and be captured by the first baddies, etc! 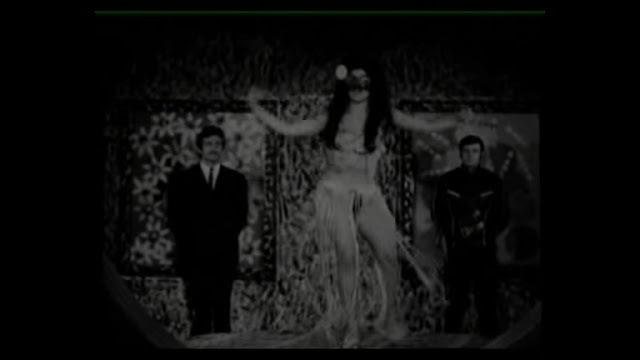 The climax turns out well, but there's not really much in the way of a denouement, or even so much as a parting word. Enver defeats Fu Manchu, his girlfriend says 'Oh, Enver!', and everyone walks off into the sunset! Oh well, at least we got that much. It's actually kinda surprising how long the movie lingers on that final image, rather than show it for just a split second before cutting to Son. Perhaps the director was proud of how it looked? If so, he had good reason! It's a nice ending shot, even if it does grate on you that the characters barely said a word to each-other after the villains were dispatched. 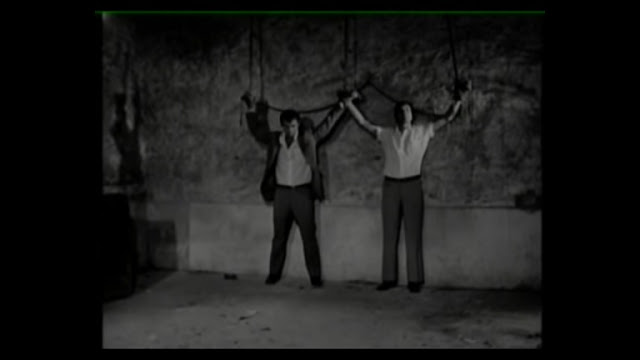 The pacing is pretty good, minus the kidnapping problem, but there's one somewhat important thing the movie forgets for the first 37 minutes. Actually showing the superhero! I'm not kidding! It's halfway through the movie before we suddenly realize there's a costumed crimefighter present, and even then, his costume is pretty optional. After we first see him in it, Enver wears the outfit pretty consistently, but it's completely missing in the final 10 or so minutes.

Demir Yumruk's script may be lacking in certain areas, but the fun action and distinctive cast manage to mostly save the movie. There are loads of distinctive characters present here  from the superhero lead, to the iron-clawed henchman and his scarred boss who wields a mitten gun, as well as Fu Manchu himself, who's a disabled transvestite! I was a little confused if he was intended to be a crossdresser, or transgender, but it seems like the former. As for how it's handled, yeah, it's good! The villain of this movie just so happens to be both these things, commanding fear and respect, which is a neat bit of representation that's still rarely seen nowadays! The other heroes are entertaining too. The comic relief Orhan isn't afraid to get into the fray, and gets an incredibly ballsy moment early on, when the iron claw guy uses said arm to strike him for insolence, and he catches it without even flinching! He looked at the thug with the friggin' metal death machine for an arm and thought "Hmmph, I can take him", and he's right! The girlfriend Meral is captured a lot, but that doesn't mean the movie is sexist towards her, because everyone gets captured in this movie! She also gets to throw down plenty too, and does enough that she's like a superhero in her own right! 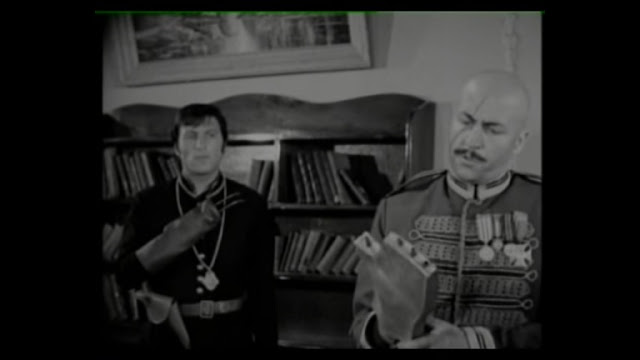 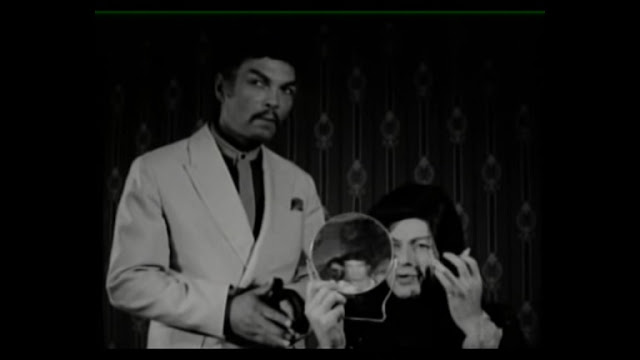 Now, you may be asking, does this foreign 'ripoff' cast an Asian actor in the role of Fu Manchu? Well, not in the way you think, but it kinda does! The actor playing him is Caucasian or Middle Eastern (hard to tell in black-and-white), and at first this was a bit strange, but then after a bit of thinking I realized it actually makes perfect sense. After all, if, say, an American white guy is playing a Chinese character, that's not exactly accurate, but Turkey is actually partly in Asia, so even if they don't look it by appearance, a homegrown Turkish dude could totally conceivably play an Asian character, because that's what they are. 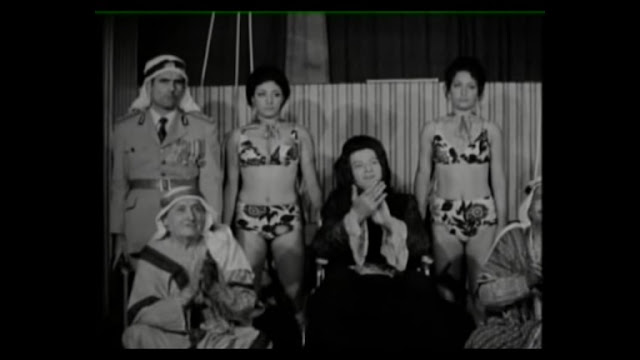 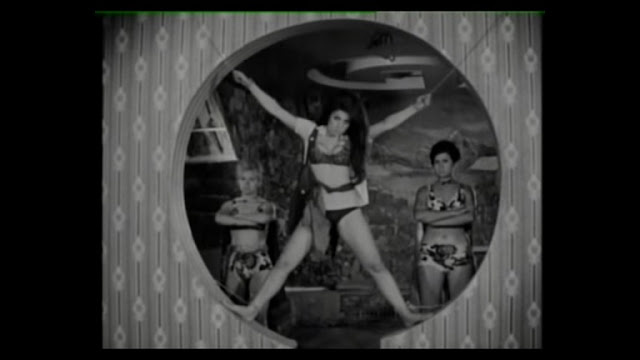 The movie mostly looks fine for what it is, with some impressively staged scenes, though there are a couple of amusing budget snafus, like the hilarious moment involving a jail cell bars that obviously weren't attached to a wall (or even anywhere near one) when the super tough hero rips them away. There was also another funny moment not caused by budget issue, but just general unintentional hilaroty, when Enver leaps off a ledge onto a moving car with a soft material top, and no-one inside hears or sees the impact! Then there's when Enver and Murat are beset by thugs while working out in the gym. They beat them up, then as the baddies are still either out cold on the floor or fleeing the scene, the two heroes have a good laugh and decide to immediately go to the showers! Naturally this goes about as well as you'd expect, with them being captured, though by other villains, but still!

Moving onto the costume, it's...interesting! It's a darker costume with a hood/cowl, and a Superman logo! There's also a Batman logo on the belt, because I guess the Turks couldn't get enough superheroes 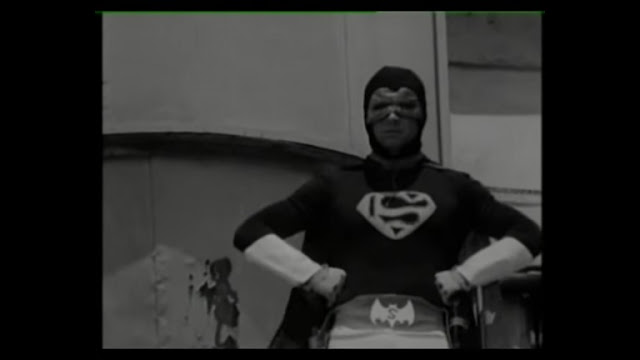 The acting seems pretty decent, with the villains having the most fun, like Altan Günbay as the scarred crimelord Zakof, and Kayhan Yildizoglu makes for an entertaining and unique Fu Manchu, even if he doesn't hold a candle to the likes of Boris Karloff or Christopher Lee (though who does?). Something interesting to note is that he apparently speaks in an old Turkish dialect for his role!

Tunç Basaran's direction is surprisingly good for a film of its type, far from being a point-and-shoot affair. There are many well-framed and choreographed scenes. 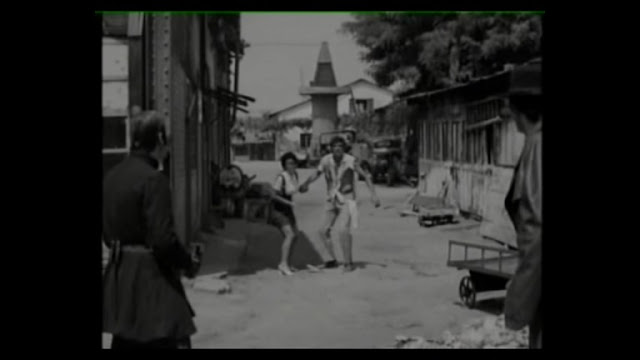 Lifted music is common in the scoring of these older Turkish films, and this is seemingly no exception, though I'm unsure of the provenance of said tracks. They're pretty good, though the really good one isn't first used until the final 10 minutes. I'm impressed they were able to wait that long, but given it's the best piece of music in the movie, I wish it'd popped up sooner.

Demir Yumruk: Devler Geliyor isn't a great movie, but as both a bit of pulp fun, as well as a cultural artifact of Turkish cinema, it's well worth a watch, and it's certainly one of the better films of its type that I've seen, and I've seen plenty!...
Posted by Chris Hewson at 7:30 PM