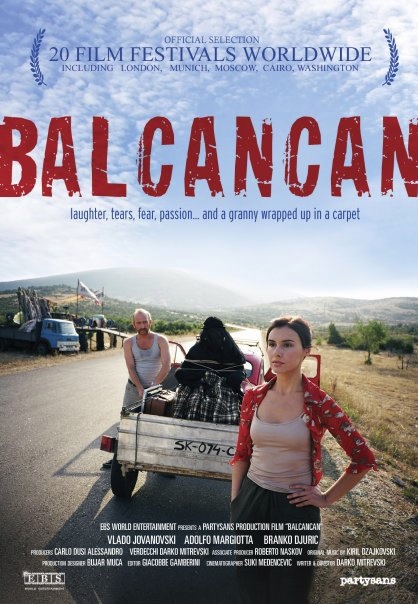 It's been far too long since I last watched a film from the Balkan country of Macedonia. The last (and only) I'd seen was Goodbye 20th Century (Zbogum na Dvaesetiot Vek)

Many years ago, blood brothers Seraphim and Vitomir tried escaping Communist-ruled Macedonia (then part of Yugoslavia), but only Vitomir succeeded. Though separated for the rest of their lives, the two remain bound, and on his deathbed, Vitomir asks his son to honour the debt he owes to Seraphim's family if they're ever in trouble. Years later, a small war breaks out in Macedonia, and the peaceful Trendafil Karanfilov has no desire to fight. Despite the efforts of his hostile mother-in-law, Trendafil manages to hide the draft with the help of his devoted wife Ruza, and eventually flee the country for the time being. On the way though, the mother-in-law dies, and Trendafil, unable to secure a burial in the region, buys a carpet to keep her in until Ruza can return home.

However, it's not long before the carpet is stolen, granny and all, and the despondent Trendafil calls up his blood brother, Vitomir's Italian son Santino, for help. The duo then begin their search for the missing carpet, and it's one that will take them all through the scarred regions of the Balkan countries... 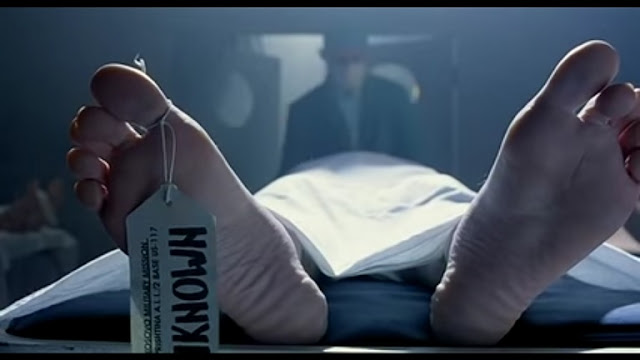 Bal-Can-Can is a really fun and involving watch, and shows how good Macedonian cinema can be. It's partly a comedy, of the decidedly black variety, but also an allegory on life in the Balkans, and the state of the region. If you're unfamiliar with it, this is a good piece to watch. You might not pick up on certain things that locals might, but you'll definitely get a feel for the land here, and some of the people in it.

Focusing more on absurd bureaucratics at first, the film takes its time setting the characters and world up before jumping into the road trip. That only begins over half-an-hour in. Not sure how I feel about that, because it makes the film feel like something else before suddenly shifting gears nearly halfway through. At least the set-up is very much fleshed out. 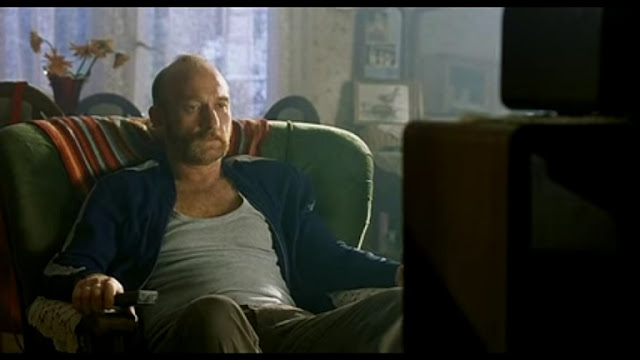 While it starts off as a goofy enough movie, if rooted in a serious location and time, Bal-Can-Can gradually gets darker as it goes on. It's a really good progression, and it was interesting seeing the movie suddenly become very serious (though it mostly never loses the comedy altogether).
Though it gets perhaps a little too dark in the final act. It also got a bit ridiculously action-y, and I felt that took away a bit from the realism of this strange odyssey. It was pretty absurd at times, there were moments of coincidences, or stunning bad or good luck, but the finale really does start to stretch credulity in a way the rest of the film didn't. I also felt that Santino dying didn't add much, or at least, not in the way he died, which felt a bit pointless. On that note, I'm not sure if I like that we know he died from the get-go. On one hand it's quite the spoiler, but on the other hand the framing device of the corpses in the morgue 'chatting' sure is an interesting one! 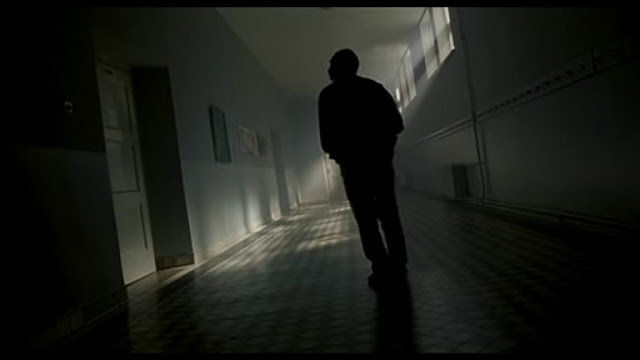 I definitely enjoyed the characters here. Many are quite exaggerated, as well as more than a little silly. Trendafil is a quiet and resigned protagonist, and isn't very emotive, but that's the point, and his progression is neat, even if it did get a bit over-the-top come the climax. Then there's Santino, a low-life criminal who completely forgot about the promise he made at his father's deathbed about helping his blood brother if they're ever in trouble, but the moment he remembers, he speeds to the Balkans with barely a word, and tries his best to help Trendafil. It's interesting seeing this character grow as the events become more dangerous and serious. Ruza is likeable and somewhat abrasive, leading to many amusing lines, though she disappears from the action once the search for the carpet starts, going back to to Macedonia and only seen again at the very end. 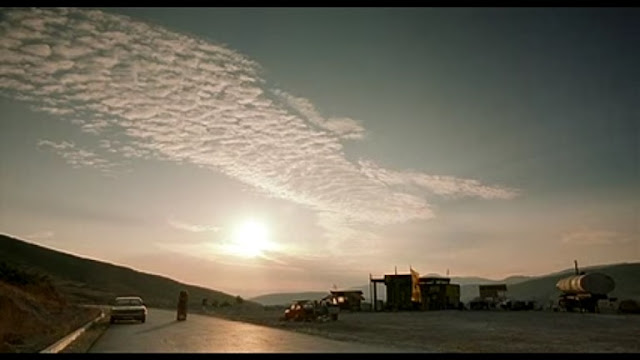 Probably the only weak link is in the villains, not because they're poorly realized, but because they don't really appear much due to the road trip nature of the film. Instead we see the leads meeting various other people on their search, some more deadly than others (even if only to themselves), but the proper villains don't appear until the last 20 minutes, and aren't really fleshed out much. They're just evil gangsters/traffickers. Dzango the Soap is a consistent antagonist, which is good, though he's not the major baddie.

The acting in Bal-Can-Can is really good! We get a variety of performances, some more subdued and others more over-the-top. As for any bad performances, I didn't spot any, but the language barrier would make that a bit hard unless they're visually weak, like if some were wooden. 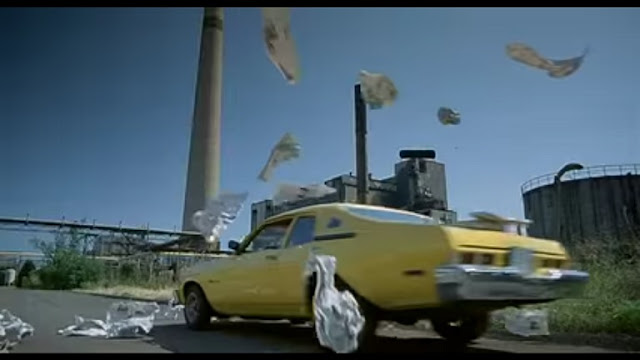 It was great seeing Vlado Jovanovski getting a lead role. He's a really good actor, and after enjoying his performances in smaller roles, I was glad to see him handling bigger material. He delivers a fine stoic perfermance. Adolfo Margiotta was really good as Santino, and come the end he was like the heart of the movie. Zvezda Angelovska was entertaining, and I especially liked Jelisaveta 'Seka' Sablic as Zumbula the grandmother, and her hilariously hostile relationship with her son-in-law.

Bal-Can-Can's direction is really good, with many beautifully shot scenes, which use the environment to full effect. There are a couple of moments where the editing goes a bit haywire, but those aside, it's put together well.

The score is varied,with a very local sound to it. It starts off pretty fun and peppy, and once the tone starts to shift, it reflects that really well. I wonder if the success of the tonal shift would work even half as well if not for the score, because it lends so much more power to the sudden drama! 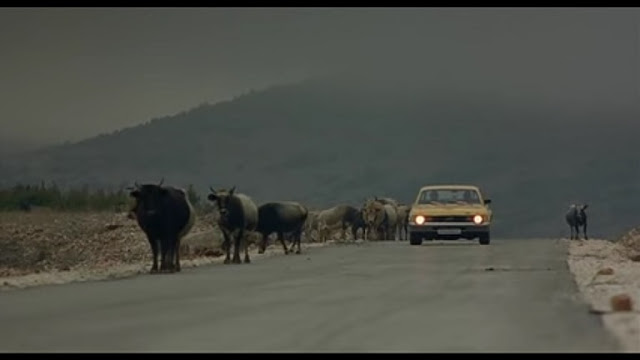 I have it on good authority that Macedonians are much like us Australians in that they watch foreign films in their original languages, with subtitles. Yay!  Not only that, but whenever there are characters from other countries in this movie, they speak in their respective languages, which I thought was neat! It's a very lingual film, with characters speaking in Macedonian, Italian, Bulgarian, Russian, Albanian, Serbian, etc.

One last thing to note is something any filmgoing Macedonians will no doubt have picked up on-The fact this Darko Mitrevski, writer and director of Bal-Can-Can is also the one behind Goodbye 20th Century. My reaction to this, a little while after seeing the film, was 'WHAT?!'. I swear I didn't seek this movie it based on that! I mean, I would've, had I been aware of it sooner, but I discovered it due to entirely different circumstances, and by coincidence, this just so happens to be created by the same guy behind my favourite Macedonian film! Synchronicity, huh! 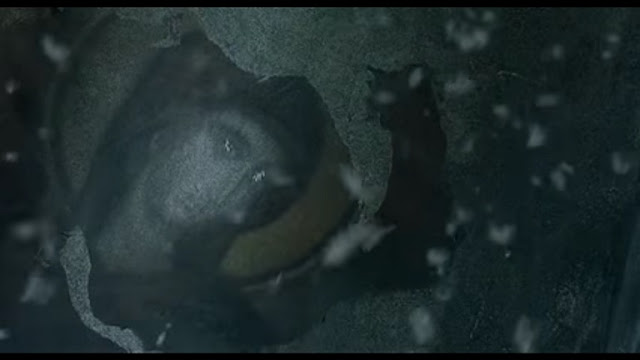 Bal-Can-Can is a worthwhile watch, both funny and dark, and a great film I'd recommend to those interested in foreign cinema, particularly if the Balkans are of any interest to you. I hope it doesn't disappoint!...
Posted by Chris Hewson at 10:21 AM