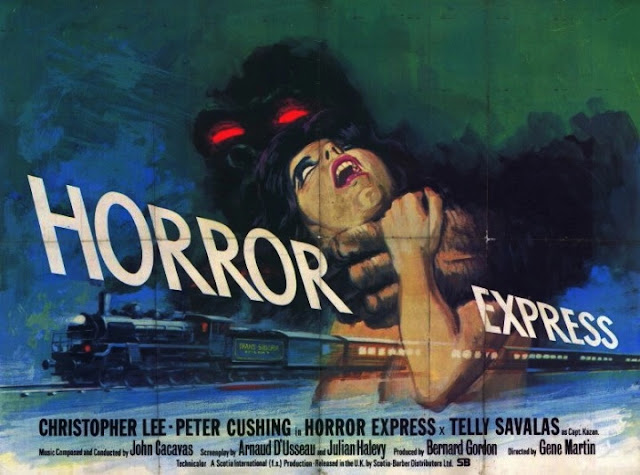 After a dig in Manchuria, archaeologist Professor Saxton is returning to London via the Trans-Siberian Express, with a unique new specimen in tow, of what he believes to be the Missing Link. However, this 200 million year old relic soon shows itself to be not quite as dead as it looked, as it starts killing passengers one by one, absorbing their essences into itself, until its sinister motives become clear... 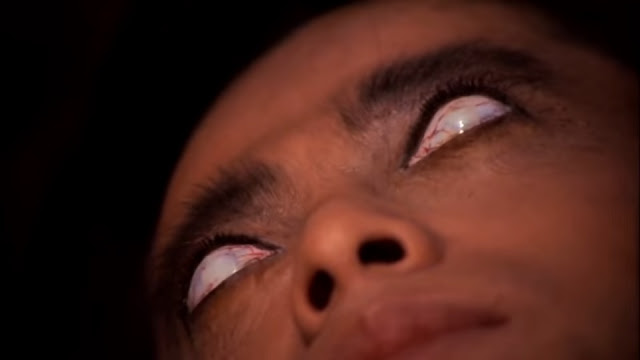 Public domain horror sets are usually home to movies that fell into the public domain for good reason, but occasionally you'll spot a gem, and many have when it comes to Horror Express! Starring Christopher Lee and Peter Cushing, and having a guest appearance by Telly Savalas, it has a packed story involving a mad monk who foretells doom, a kooky Cossack commander, and an ape man who turns out to be either Satan or an alien (or both!) killing people by sucking out their brains! There's more, but I wouldn't wanna spoil the rest of the movie for you... 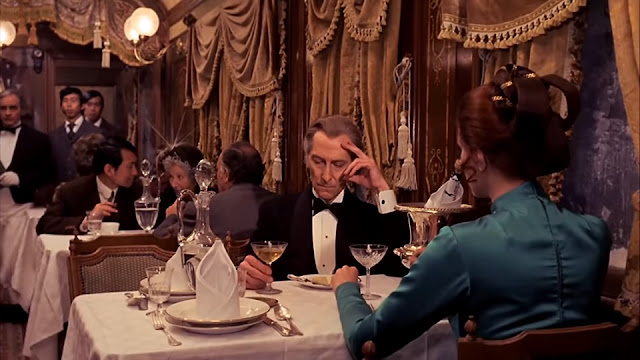 The tone of the film is different from your usual Gothic British fare, and there's a reason for that-It's Spanish! A Gothic atmosphere still permeates the film, with with a slightly different tone than other more traditional U.K. movies, especially thanks to the hint of science fiction that becomes apparent later on.

The story is simple, taking place entirely in the one place, but it's effective! It's never boring, it takes some surprising twists and turns, and I'd say that every half hour it radically shifts the action to keep things fresh.

The characters here are a diverse and eclectic bunch, with no two alike (well, except for the women, who are all unfailingly gorgeous Spanish beauties in their 30s). One thing that surprised me was who dies! It's...well, not unpredictable, and obviously Cushing or Lee don't snuff it 20 minutes in, but some of the characters who do die I wasn't expecting to so soon!

Professor Saxton and Dr. Wells (Christopher Lee and Peter Cushing, respectively) are both stuffy academics to various degrees, but while Saxton is more unfeeling and clinical, Wells has more of a sense of life and dun to him, even if his curiosity is something of a problem. Despite his brusque behaviour, Saxton falls into the final hero role pretty well, though the almost swashbuckling attitude he takes in the end is maybe a bit too much. 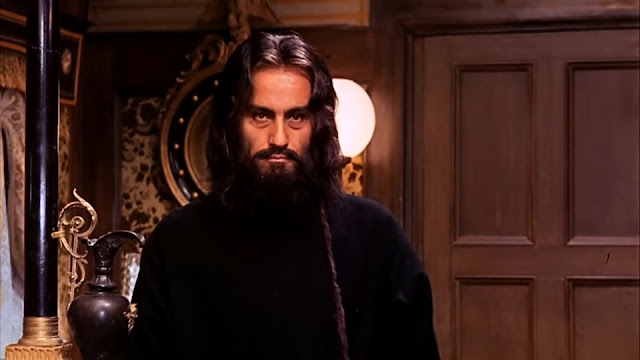 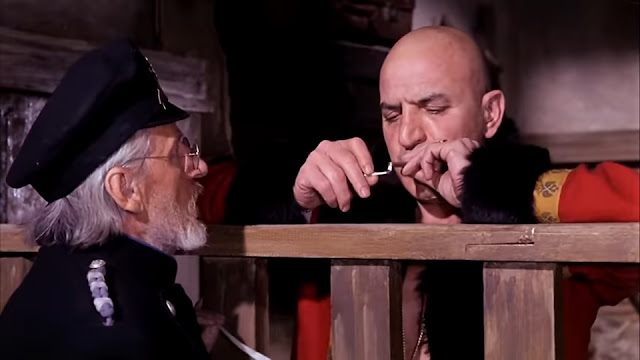 The monk is weird. He's fanatically religious, and is the first one who knows something's wrong. But the second he sees the pictures in the monster's eye, he realises its knowledge, and suddenly wants to join it. So the guy who spent the last hour demanding the creature's destruction has now allied with it because he saw a map of the Earth? Really I guess this was inevitable. If you look like Rasputin the mad monk, then it stands to reason you'll become a bad guy.

My favourite character was by far the Cossack commander. His methods and demeanour are unorthodox, but he gets shit done! That's probably why it takes him so long to show up, because if he arrived any earlier, the movie would've only been half an hour long! Unfortunately the writers saw common sense. It probably would've been poor screenwriting if the threat that's been building this whole time was suddenly solved by a new guy we've never seen before, so what happens instead is that Savalas is out of the movie after only 10 or so minutes in action! I understand, but I'm very disappointed! Especially with how poorly the super strong Cossack legion is dispatched, despite the ridiculous edge they have. 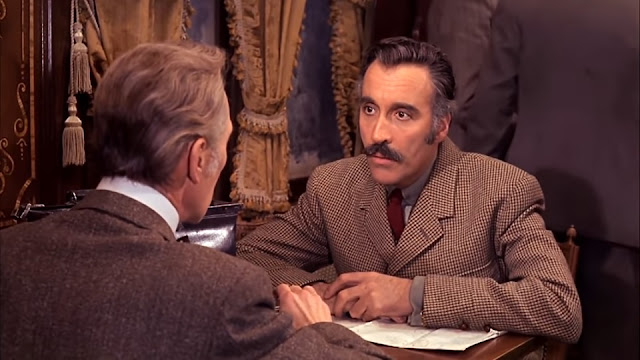 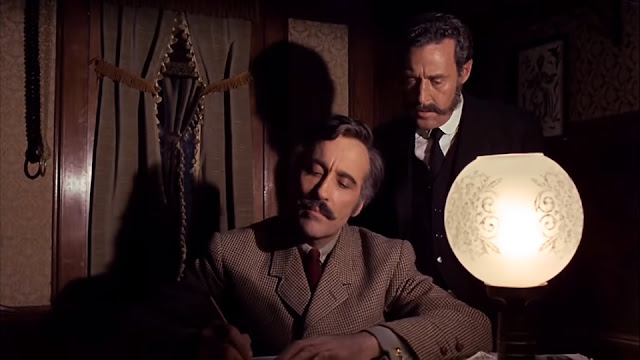 The persuasive and sultry Natasha is a neat addition, and looks superb in appearance and in fashion, but is pretty underused, and killed very early on. It's kinda amusing watching herself introduce herself as a helpless and innocent fawn, but later says things like "My glass is empty" to her new male companions. Dr. Well's scientist friend Miss Jones is sassy and likeable, and is missed in the last act. The engineer is likewise alright, and felt like he could've made a greater contribution.

The movie keeps things ambiguous as to whether the villain of the piece is really supernatural or not. They're a well-written foe, and while they get a bit too talky later on (and his characterisation runs the risk of melding with others and perhaps diluting), they're still an imposing figure.

One random note is a bit of a plot hole, when after Saxton orders everyone to always be in pairs, they frequently go off alone (mainly Lee himself!). There's also some hilarious science on display. The concept of seeing the final image a person saw before their death is bunkum, but it's feasible bunkum. This movie goes one step (or rather 100 steps) further by saying that if you drain the liquid from the eye and look at it through a microscope, not only will the image be preserved, but you can see every image the person in question ever saw, like a gruesome viewfinder! 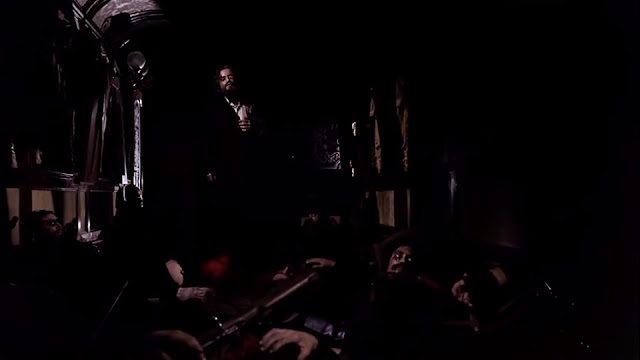 The acting is all well-done. The regal Christopher Lee is convincingly unfeeling as Professor Saxton, while not coming off as so selfish that he'd take no action when things get bad, while Cushing's character has a somewhat irresponsible streak at times, but is otherwise a good guy, which Cushing gets across well. From his very first scene, Telly Savalas exudes charm, and I wish he had a bigger role. Alberto de Mendoza is alright as the monk, and Julio Pena is decent as Inspector Mirov, but disappoints a little in his later villainous turn.

The score to Horror Express is very good! Played subtly, it's made up of a melodic whistling. Strange enough to be creepy, but not so much that it's obvious.

The effects on display here are neat! The whited eyes is a good effect, and though it soon becomes a bit overused by the end (this is a film not short of bodies!), it's effectively creepy. The monster perhaps could've seen a bit more use, but I guess the writers realised it'd soon become ridiculous for a 6 foot tall prehistoric ape man to be roaming around the carriage without anyone noticing, so it's gone after half an hour, bar a recurring furry hand. Lastly, there's the setting. I'm not sure how much of the train whizzing by was shot on location and how much is model work. It looks like a bit of both, and it looks good! An atmospheric and chilly location, with sombre lighting, and well crafted models. 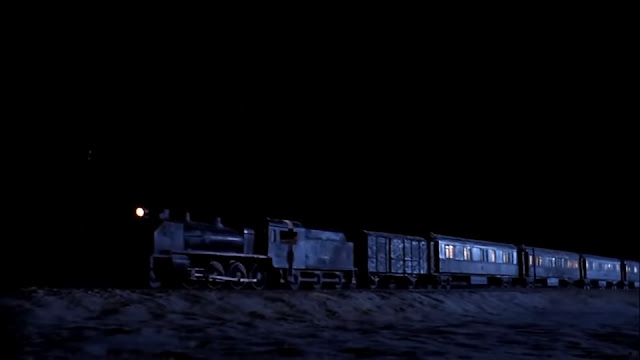 Horror Express isn't perfect, but it's a real gem, and I appreciate it for its creativity and effort. If you're looking for a Lee or Cushing film that's a unique treat, or you're wondering what Telly Savalas gets up to on his off days from Kojak, look no further...
Posted by Chris Hewson at 6:28 PM