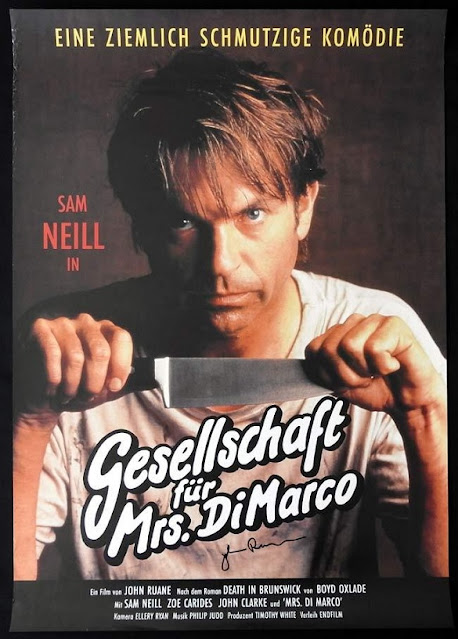 Carl Fitzgerald is poor and unemployed, and worst of all his overbearing mother is coming to stay. He soon gets a new job as a cook at a grotty nightclub, working with Turkish assistant Mustafa, and attracting the attention of pretty waitress Sophie. Things seem to be going well, until taking a sudden downturn. After the club's violent bouncer bashes Mustafa and says Carl dobbed him in, the Turk becomes violent, and is accidentally killed in the scuffle. A panicking Carl must now get rid of the body, and somehow hope to survive everything else about to come his way... 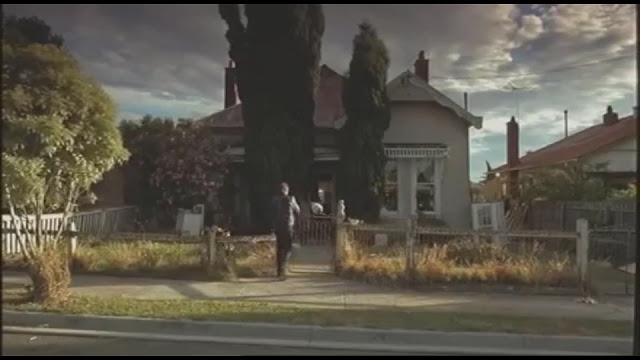 Death in Brunswick is a great example of homegrown Aussie cinema. I first saw the movie on tv, halfway though, yet I managed to get the gist, and really enjoy myself. It left a great impression with me, and it's always ranked as one of my favourite local films. 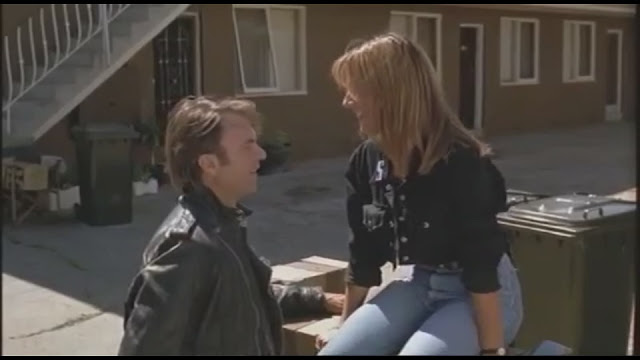 The various posters or DVD covers have taglines of varying degrees of quality, with my favourite being-"His wife left him, his mother moved in, he killed his assistant, and now he's in love". That's a perfect summation of the movie for me! This is a black comedy, although only in certain sections. The movie as a whole does have a rough-around-the-edges feel, but the first act focuses more on romance, and things go surprisingly well!
Death in Brunswick is set in the titular Melbourne suburb, portrayed in a grungy and run-down way, but also with character. The film shows the multicultural side to Australia, with a big focus on the Greek and Turkish communities. We see the good, the bad, and the typical. Regular joes, gangsters, and controlling parents. 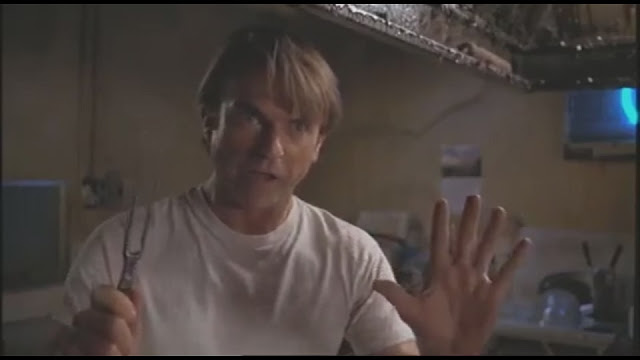 The comedy here is golden stuff, like when Carl and Soph's planned necking date at the pictures turns out to be less than successful when the audience is made up entirely of jeering kids. The most well-remembered part is the graveyard sequence, which has a few memorable moments and lines. My favourite scene is Carl's confrontation at the end with his mother. To this date, I have never heard a funnier line involving tea! 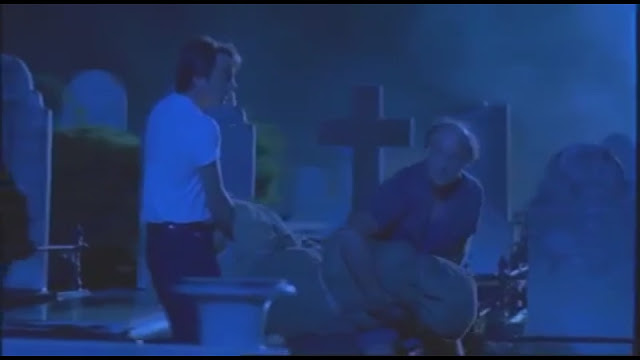 The plot is really good, and always grabs your attention. What I admire most about the movie is how everything comes together in the end, and connects in a really good way. No detail is forgotten, and the pieces fit perfectly, culminating in a great climax, with some perfect poetic justice. The only thing I felt unnecessary was the plot point regarding Carl's previous marriage. It didn't seem to serve any purpose, and was rarely mentioned, yet comes up in the end like it's supposed to be important, then is ignored again. 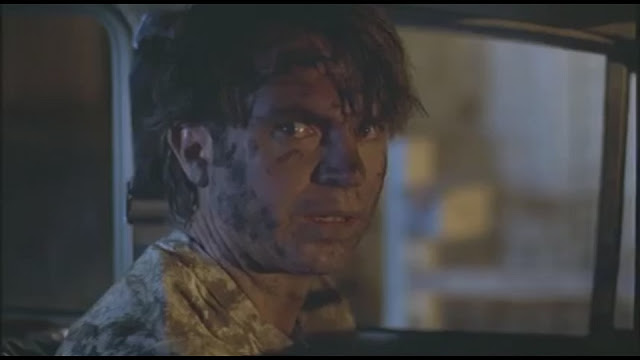 The last act is really something special. For such a street-level black comedy, Death in Brunswick becomes surprisingly spiritual, with an ending that's both sweet and hilarious. It's certainly far more lighthearted than anything that's come before, but in a way that feels earned and without compromising the overall tone. And I can't say how refreshing it is to see a dark comedy that's not 'too cool' to have a happy ending. 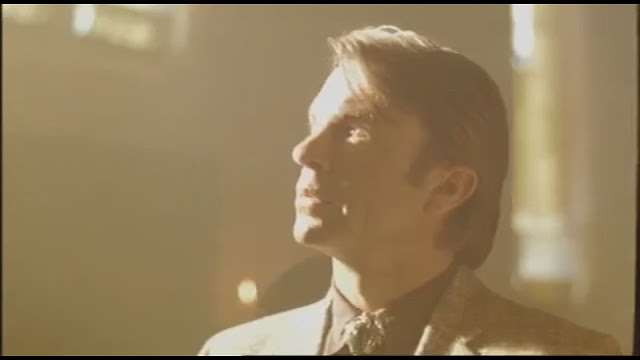 Carl is a likeable and sympathetic character. He's very believable, and you can understand how he is the way he is, while also hoping he gains the courage (and backbone) to really make a change. The bulk of the film has him doing just that, which is a relief to see. The rest is him spiralling into damage control, hoping he can get everything fixed before it's too late.
Sophie is a sweet love interest, and shares chemistry with Carl. It's nice seeing how successful their romance is. She really doesn't mind his awkwardness, and helps him come out of his shell. Carl's mother on the other hand is a real battle-axe. Coming to stay uninvited, judging him for his career, his lack of love life or money, his cleanliness, and just about everything else under the sun. Always in a politely worded yet patronising way. She ends up with an amusingly fitting karmic punishment.
Carl's long-suffering mate Dave helps him out whenever he's in trouble, always putting him in the doghouse with the missus. He's a good bloke, even if his ideas of making space leave something to be desired! And lastly, the villains are a low-down bunch of assholes, from the overly macho club owner, to the violent bodyguard Laurie, who really does test fate a bit too much, leading to a hilarious final scene. 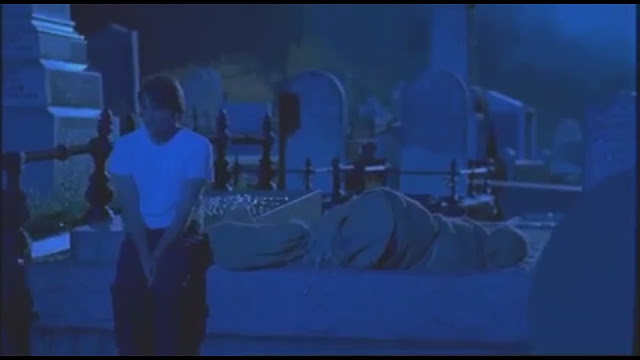 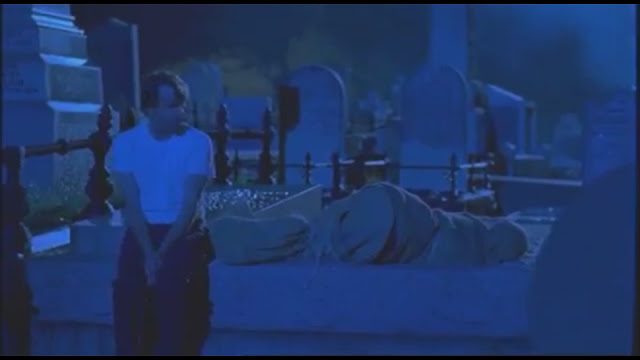 The performances are all good. Sam Neill is a great lead, and manages to get across both the age and youth of his character. Zoe Carides is sweet, with a bit of feistiness. John Clarke is a great supporting presence, and is the second Kiwi to have a big role in this Aussie film! Yvonne Lawley is perfect as Carl's domineering mother, mean without coming across as a caricature. Nicholas Papademetriou and Brois Brkic are good in different ways as the villains. Nick Lathouris is scruffy and likeable as the ill-fated Mustafa, and Doris Younane is a fun presence as Sophie's friend (like Effie if she was normal).
The music here is really nice, predominately made up of ethnic music. It has a very Mediterranean sound to it, with Greek and Arab inspired tunes. I especially dug the one that plays over the end credits. 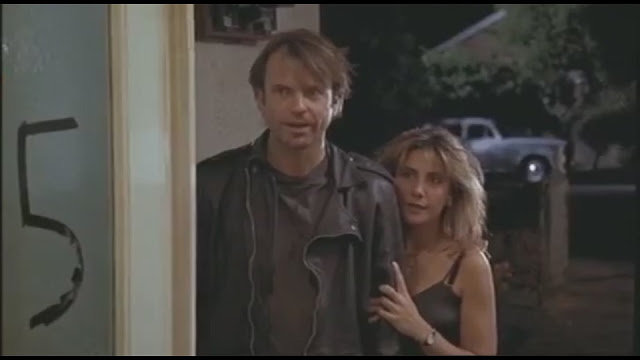 Death in Brunswick is a minor classic, and deserves to be seen more outside of the country. It's slightly macabre, witty, funny, and also surprisingly goodhearted...
Posted by Chris at 7:08 AM