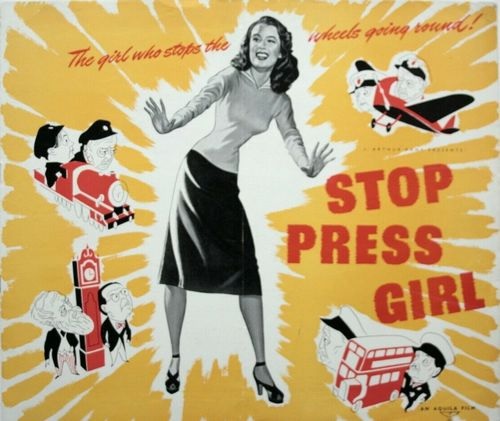 Stop Press Girl
Jennifer Peters is a sweet young country girl, soon to be engaged to enterprising watch tycoon Roy. After making a less than striking impression with her uncle, he learns that all women in Jennifer's family have a strange power. Without knowing, she stops all machinery after 15 minutes-Watches, vacuums, cars, etc. He runs screaming, leading Jennifer to journey to the city, where she meets friendly reporter Jock, and gets a new job as an air hostess... 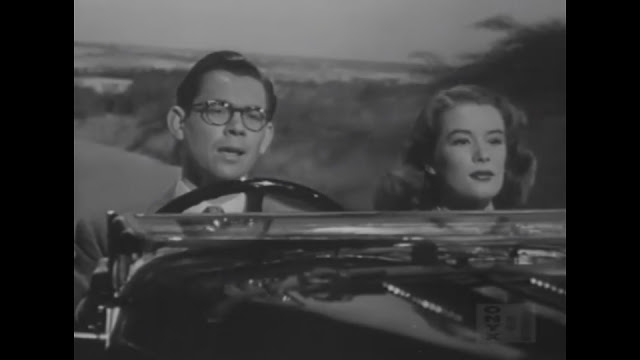 Stop Press Girl is a fun light fantasy picture. Despite its ideas, it never aims to be high concept, which is ok. For a movie like this, the light touch is appreciated. It's enough to be there, but not so much that the imagination stretches beyond the budget. 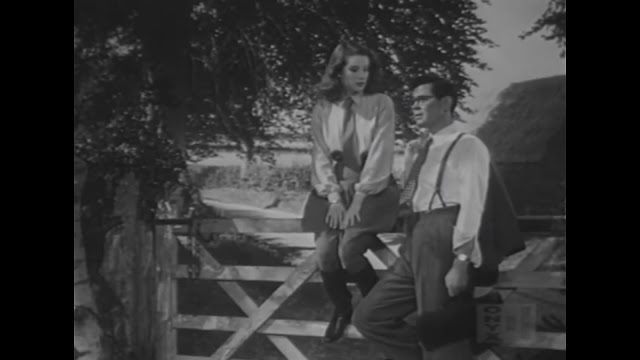 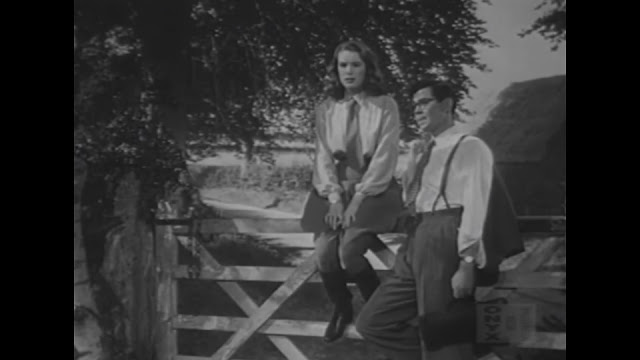 Some accuse the movie of having one joke, and running it into the ground. I disagree. Yeah, the movie has this main source of humour, but that doesn't mean it's lazy. We're not just seeing the same joke again and again either. The one element leads to many different jokes. And the movie utilises it well either, never doing too much at once. It keeps an air of simplicity that is justified, especially with the short runtime. A movie that's under 80 minutes is allowed to be simple. 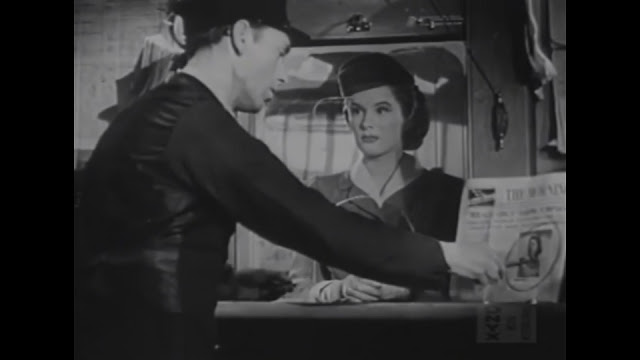 Jennifer is a sweet character, innocent without being naive. It's nice following her on these little adventures, and seeing how she adapts to it all. Her uncle is amusingly business-minded, and gets some great scenes, like his interrogations/dental exams of prospective suitors.
Roy is a likeable enough boy, if not the ideal man for Jennifer. It's amusing hearing him 'smooth talk' her. "I'll be able to give you all the things you've always wanted." "And what are the things I've always wanted, Roy?" "Oh, the usual. Clothes, a car of your own, a flat in town, visits to theatres, races, and parties." 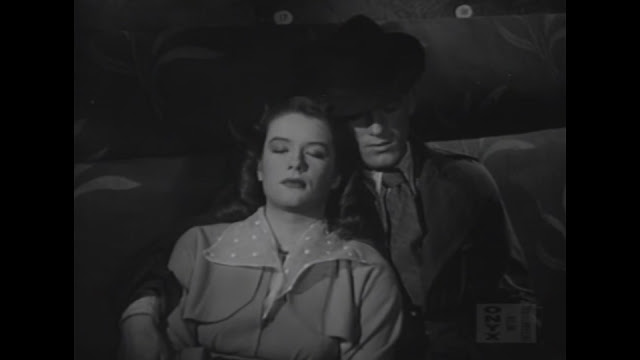 Roving reporter Jock is a more salt-of-the-earth type, and a fun bloke, but flawed enough to create tension (from his inability to just let a good story lie). He immediately gets on well with Jennifer. The pair share good chemistry, and I appreciate the movie having a Scotsman as the romantic partner! 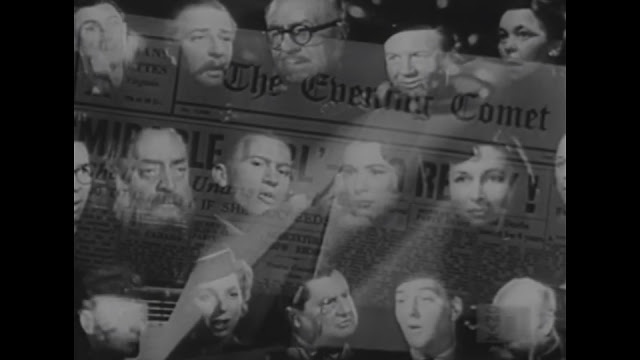 Friendly rival Angela serves as the closest thing the film has to a villain. It's funny how the motives of both the 'villain' and Jennifer actually align. Angela believes her to be a sensation hunter and plans on killing the story. Jennifer meanwhile decidedly isn't a sensation hunter, and is just as eager to squash it. I wish a little more was done with this, like the two women actually working together, but at least it's not bad. 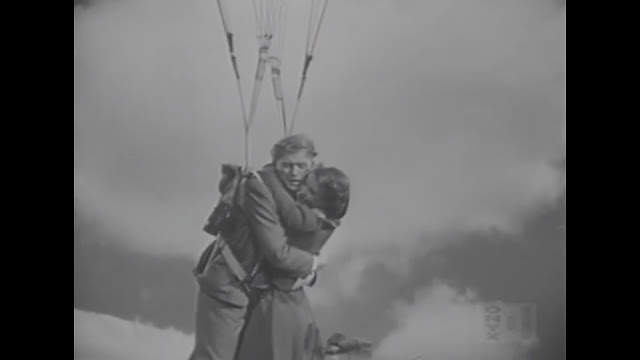 I was a little disappointed with the conclusion, since now no-one will believe Jennifer's powers are real. But I suppose it's ok, since she never wanted that anyway, but Jock's job will certainly be worse for the wear!
The ending itself is a funny way to close out the movie, perfectly fitting for the story. 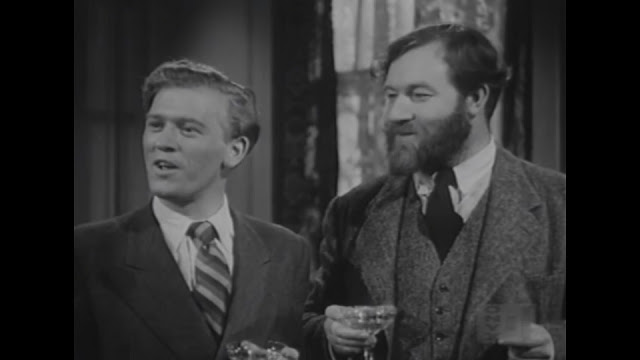 The cast here is plenty of fun. Sally Ann Howes is a delightful lead. It's a treat seeing her this young, when all I know her from directly is Chitty Chitty Bang Bang, almost 20 years later. On that note, here as her patriarchal figure (uncle instead of dad) is James Robertson Justice! He's always a hoot, and is his typical blustery self. Doing a fine job is Gordon Jackson, coming across just as mature as his Professionals days. Nigel Buchanan is good as the beleaguered Roy. Everyone else is fun, and there are even a duo (Basil Radford and Naunton Wayne) who recur as different characters. I never even noticed! I appreciate the subtlety, even if the film might've done too good a job of it. 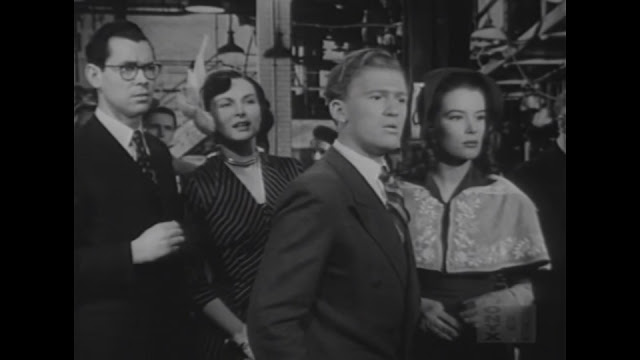 The visuals here are very nice. While this may have been a more lower budget film, you'd never notice, due to wise directorial choices, nifty effects, and some really neat cinematography in some shots, including a subtle but interesting shot of a lorry driving out of the night fog. The parachute scene is well filmed too. 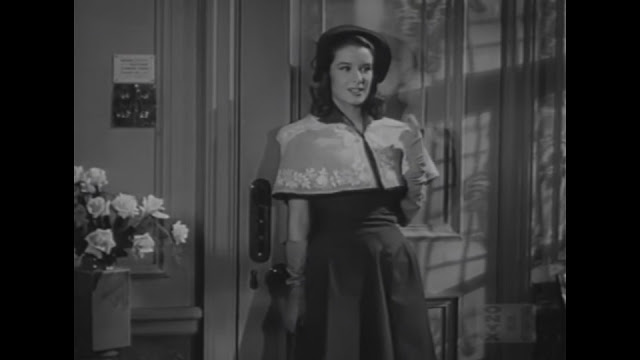 Stop Press Girl is a charming little movie. If you're keen on early British cinema, this is perfect to check out, and for me is just as good as the likes of Miranda. 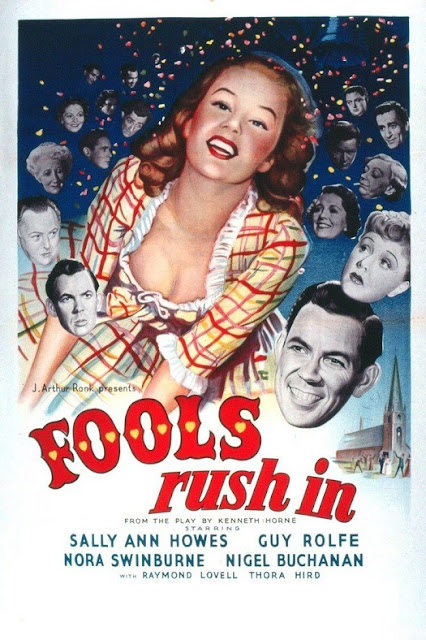 Fools Rush In
Pamela Dickson is a young girl on the cusp of marriage, but having cold feet. It's not that she doesn't love fiancee Roy, but in part due to her mother's tempestuous divorce, and her own bad habit of overthinking, Pam insists on postponing the wedding until both she and Roy really understand what it means to get married. Meanwhile, her long-absent father reappears to a mixed reception, and Pam jumps at the opportunity to get to know him. After all, if he's a rotter, the divorce makes sense. But what if he's a perfectly upstanding chap... 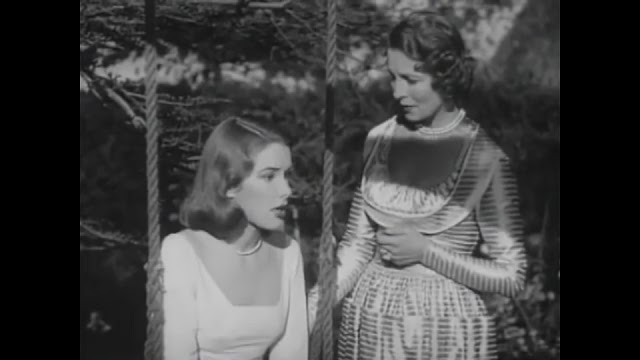 Fools Rush in is an example of a simple, nice comedy from England. Simple yet effective. The theme is all about the institution of marriage, and leads to some funny scenarios. It's surprisingly un-dated for it's time, with all its talk of divorce and remarriage. This is still 1949 though, and there are some scenes and exchanges are bound to cause a chuckle or an eye roll. 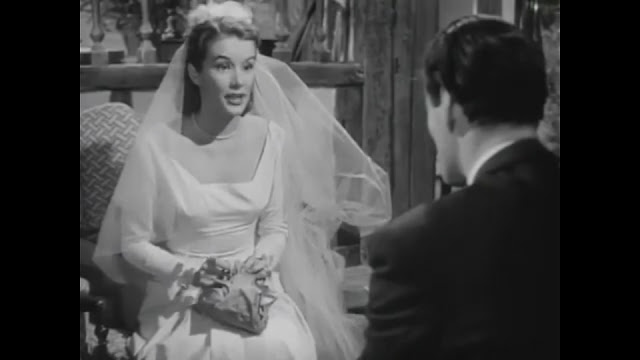 The story moves along at a fun pace, although I did wish it would hurry up and explain just why Pam's parents divorced, because that mystery keeps most of the cast on edge wondering, and there's no good reason to leave us hanging. If knowing the answer will set everyone's minds at ease, it's a wonder why the parents doesn't just tell them. 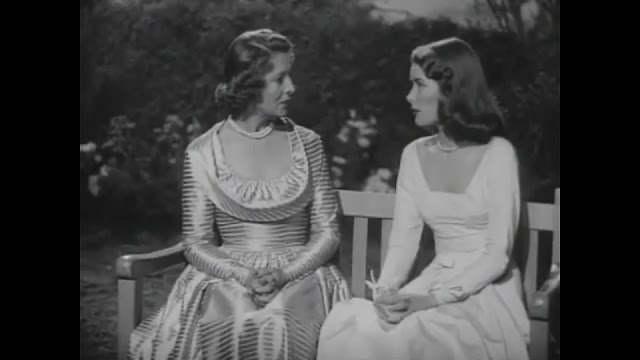 Some moments are a little cringey, but are always resolved quickly. Like when Paul gets revenge on the snooping maid by pretending to be a masher. I thought that would cause no end of trouble, but everyone catches on pretty quickly that it's all an act.

Really there was only one thing I disliked about Fools Rush In-The ending. It's hard to tell exactly what's happening, since the action is all offscreen, but either Pam is getting spanked, or...! If the former, it's not exactly fun (characters getting spanked can be an amusing comeuppance and way of ending a movie, although in this case it's a bit much for such a sweet character). If the latter though it's a really misguided and unpleasant way for the movie to wrap up! 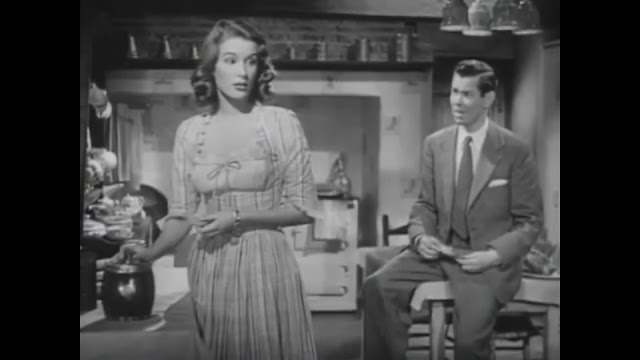 Pam is a mixed protagonist. Nice, and surprisingly intelligent! A little too much for her own good, really, much to the frustration of all those around her. I did start to get a bit annoyed with her wishy-washiness by the last act, and was happy to see her eventually see reason. Her fiancee Joe tries his best to cope with the situation, and you feel for the poor guy. It gets to a point where he can't seem to do anything right, like going in for a kiss and forgetting to remove his cigarette. 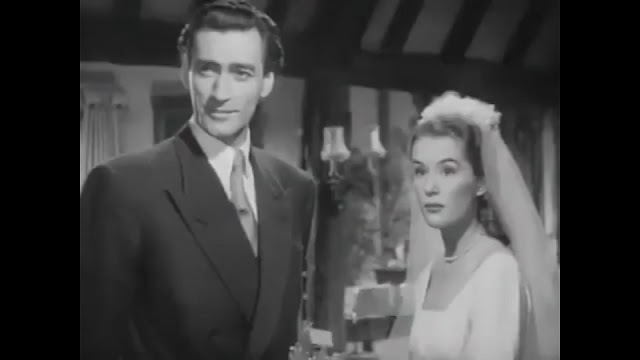 Pam's mother Angela is naturally bewildered by her daughter's actions. She has a nice relationship with her new partner, Sir Charles. He's a decent guy, though I wasn't a fan of their split-up at the end. It felt like it only happens because the writer wanted it, and not because it was natural. Instead the film concocts a bizarrely sudden reason for them to call it quits, and Angela decides to shack back with her ex, the very same night!
Paul is likewise a perfectly amiable gentleman, and not at all the cad his daughter expected him to be. Although it's weird how there isn't anything wrong with him. He's kinda made out to be perfect, really, which is a bit disappointing. Cheeky maid Millicent gets a few laughs, especially with her scheming later on 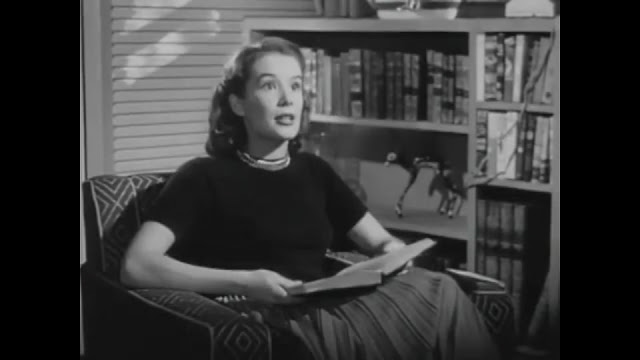 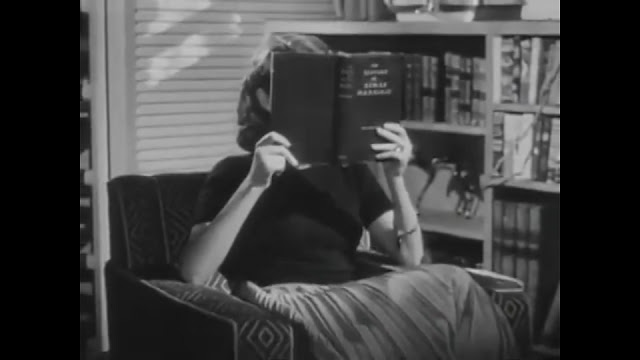 The cast all do a fine job here. Sally Ann Howes is sweet as always, even when her character enrages, while Nigel Buchanan gets to be the main love interest this time, and is amusingly exasperated. Guy Rolfe delivers a believable performance, and the remainder of the cast is made up of fun ladies. 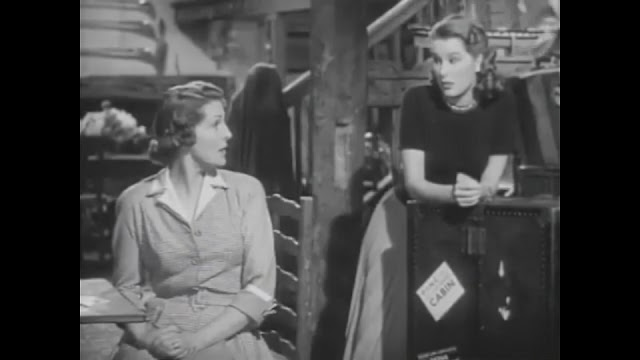 The dialogue is the best part of Fools Rush in, and an absolute hoot all these years later
Regarding passion: "You don't get swept off your feet by personal regard." "I prefer to say she was infatuated." "What's the difference?" "Miss Pam, I will not stand here and listen to you accusing your mother of passion."
"I know it sounds mad, but when you came in this morning you seemed so nice, and I thought well if he's a rotter it doesn't show. And that's disturbing. And if he's not a rotter, why couldn't mummy get on with him? And that's even more disturbing!"
"Pam, I will not allow the Encyclopedia Britannica to interfere with my affairs"
"Oh, that revolting old creature!" "Which revolting old creature?" 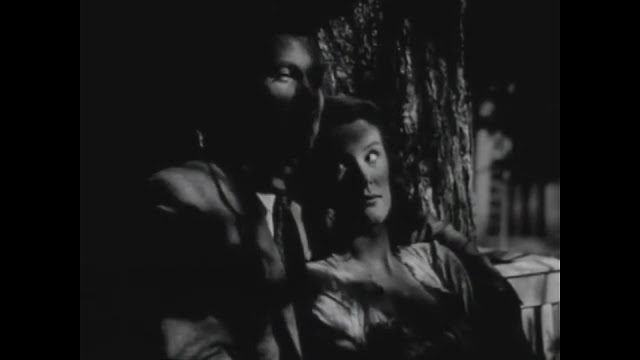 Overall, Fools Rush In isn't anything special, even among its own ranks, but it's a breezy enough watch, and has some golden dialogue to help elevate it. It's worth watching for fans of old British comedy, and doesn't fail to deliver that quaint charm, even if it isn't a classic...
Posted by Chris at 7:33 AM