American sitcoms can be a trite and cliched territory when they're not outright garbage (yet bizarrely long-lived garbage), but there are always some that are different, or ones that stand out through sheer quality. I'd always heard of Laverne and Shirley growing up, and knew it had a big reputation, but had never actually seen it until 2014, when I caught reruns on tv. I was instantly hooked, and became a fan overnight. To this day it's one of my all-time favourite shows, and I'd like to explain why...
Laverne DeFazio and Shirley Feeney are two cheeky but well-intentioned girls out in the wide world of Milwaukee, working at the Shotz brewery day in day out, and hanging out at the DeFazio pizza bowl with their friends (or nuisance neighbours). From Laverne's attempts at finding a fun date, to Shirley's attempts at finding true lifelong happiness, these girls are never short of adventure... 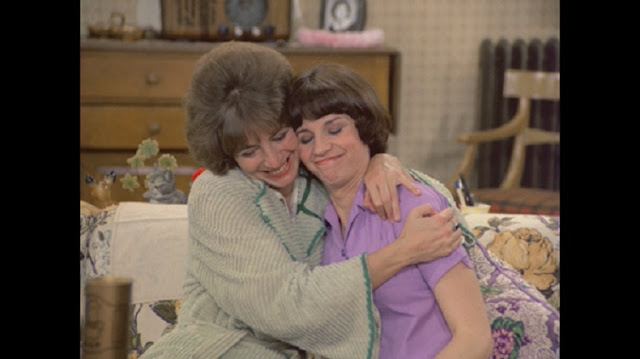 Laverne and Shirley is a conventional sitcom, but what makes it stand out, among other reasons I'll get into soon, is the quality of writing, and the characterization. This is an often hilarious comedy which always has fun stories of the gals getting caught up in one mess or another. The show also displays a level of character and continuity consistency that most sitcoms don't have. The writers here clearly weren't lazy, and never forgot details little or big.

This is not only a very funny show, but also one that brings a smile to one's face, which is extremely appreciated! I love when shows can make you feel happy! While it's not a schmaltzy love-in where everyone is perfect all the time, no-one ever acts truly badly, and it's always enjoyable.

The characters in Laverne and Shirley are all great! The titular duo are hilarious! Both actresses perform them and their quirks superbly, with Laverne being an immature goofball with a knack for mischief, and a hankering for the 'rodeo-do-do', while Shirley is a more reserved and serious girl, usually trying to be prim and ladylike, while at times manic. You really do get the impression that these two ladies are friends, and their relationship is the heart of the show. 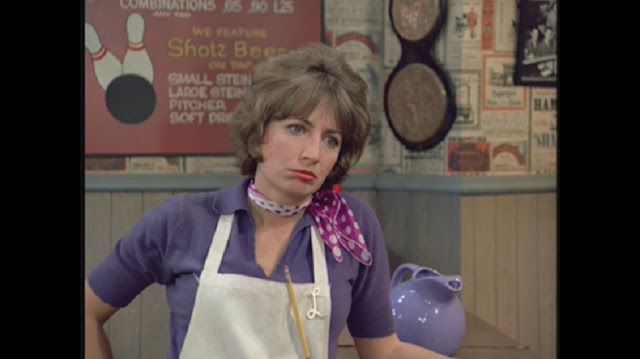 As for the neighbouring pests Lenny and Squiggy, they seem absolutely grating at first, but you get used to them pretty quickly, and you even see at numerous points why Laverne and Shirley are friends with these two dopes. Scenes like that really help flesh out the character relationships, which is leagues better than shows where characters hang out with slovenly and irritating people all the time for no reason.

The rest of the cast, from Laverne's gruff but loving father Frank, his spouse Edna, and Shirley's on-again-off-again beau Carmine, are great fun, and the later additions, such as Sonny, and Rhonda, are good too, and don't come across as Cousin Oliver's. There are also really good supporting/minor characters such as the caustic Rosie Greenbaum, who's always at odds with Laverne, sparring both figuratively and literally, but is ultimately friends with her and Shirley, and then there's the tough bruiser Terri Buttafuco, who's character develops very well over her occasional appearances. 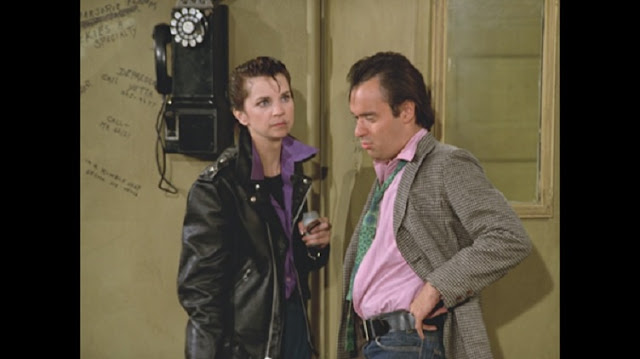 While predominately goofy, the show isn't afraid to get serious. There are some dramatic episodes, and they're really good! They don't come across as forced, and some are likely to break your heart! Minor dramatic moments are all handled well too, and the show gives good messages overall.

What's especially awesome is that this show even does gimmick episodes well! First, let's discuss the requisite clip show. Now, there's nothing revolutionary about the framing of this episode, but it has good clips, and its framing story is not only funny, but very well-done, focusing on the title duo's friends as viewpoint characters, giving their thoughts on the gals. Then there's one episode where it pulled that old sitcom staple of doing a take on It's a Wonderful Life. It's handled well here not only because of the genuine pathos the episode delivers, but also because the conceit is just a dream that Laverne has after falling asleep to It's a Wonderful Life, as opposed to other shows that just had legitimate angel visitations despite the otherwise realistic setting (I'm looking at you, Dallas! Family Ties, you get a pass by just thiiis much). 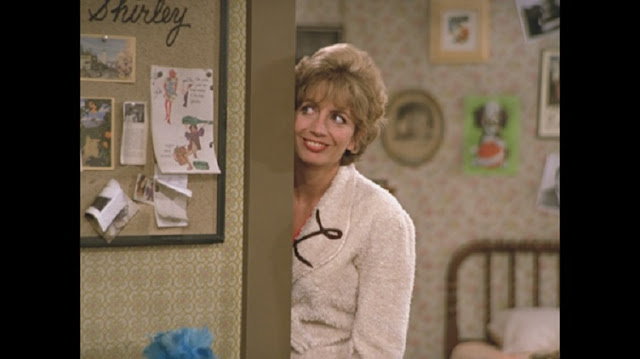 What's fantastic about Laverne and Shirley is that it also never jumped the shark! Sure, some episodes are goofier than others here or there, but they're never to the level of Happy Days' bonkers gimmick episodes (although as someone who's watched a good chunk of Happy Days, I can attest to those episodes being nowhere near as frequent as some detractors like to claim). The goofiest the show ever got was when Laverne gets mixed up in a confusion between Squiggy, and a defecting Russian ballet star identical to him. But even then, that episode is never all that far out, and even shows Laverne and Squiggy's friendship off well. 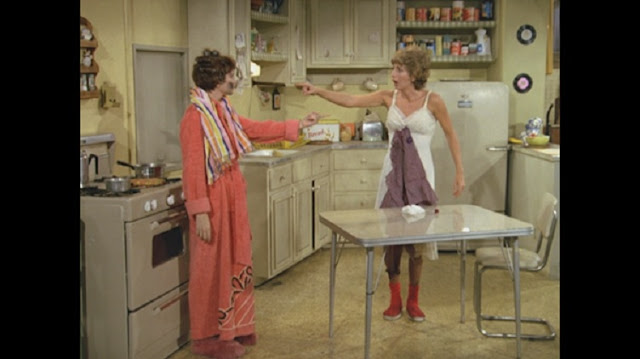 Some say that Laverne and Shirley jumped the Shark not only when it moved to California, but by that act itself, which I find to be very shaky logic. To me, the show is still just as good at that stage as previous seasons, nor is the move a bad thing. Things didn't need to be freshened up, but it's good that the showrunners decided on the change anyway, as it's never good when shows become stagnant. The sea change allowed for some new stories to tell, and new characters to introduce. As for the entire cast moving to California, well it's not as contrived as it sounds. Frank and Edna go first to open up a business there, and after being laid off, Laverne and Shirley and decide to move there too. Then Lenny and Squiggy get the same idea, and since they're slobs, they're easily able to find cheap accommodation. The only place where it starts getting a bit contrived is when Carmine moves too. That's one character too many, and while the character is still great, he doesn't appear a whole lot, making his moving too be a bit unnecessary. 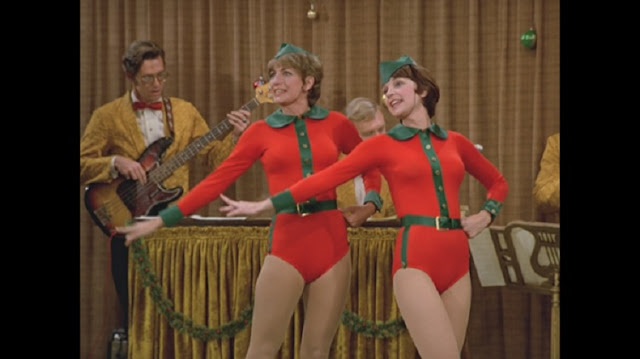 There were some issues with the show's final years though. First was the departure of Betty Garrett, which was explained by breaking Edna and Frank up offscreen, which I thought was a pretty rotten move. But more infamous than that was when Shirley herself, one half of the title, packed up her bags and departed. This was because of Cindy Williams' pregnancy (among other reasons), and so she was written out, and for the majority of season 8 the show became known informally as Laverne without Shirley. Fans just couldn't take the departure of one half of the duo, understandably so, and the show never recovered from this, eventually ending in a pretty random spot, with an unsuccessful and bafflingly late backdoor pilot for Carmine. While I find the quality itself of season 8 to be fairly decent, it did have some pretty fatal setbacks, that ultimately led to the show's oncoming end. 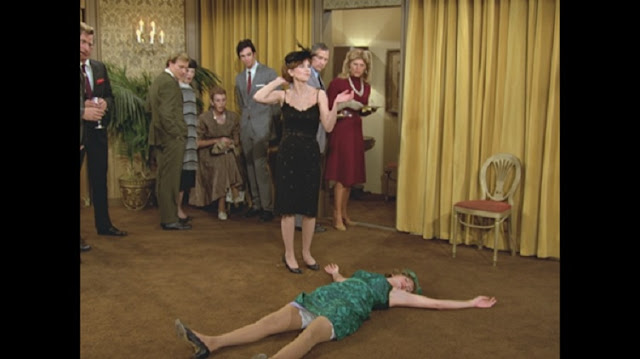 To finish, I highly recommend Laverne and Shirley! It's a brilliantly funny comedy with likeable characters, and thankfully many (but not too many) episodes to enjoy! Go to it, and why not have a milk and pepsi on the way! C'mon, you know you want to try one! I promise they're not awful...
Posted by Chris Hewson at 7:22 AM