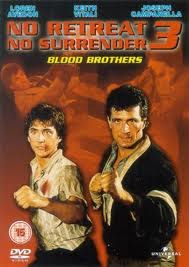 No Retreat, No Surrender is your average martial-arts vehicle, save for it being the first big role for Jean-Claude Van Damme. It had two 'sequels', NRNS 2: Raging Thunder (with Loren Avedon and Cynthia Rothrock) and NRNS 3: Blood Brothers. Naturally these two sequels have absolutely nothing to do with each other or the first movie.

Blood Brothers stars Loren Avedon and Mark Ruffalo-look/sound-alike Keith Vitali. The film is about two brothers, Will (Loren Avedon) and Casey Alexander (Keith Vitali) who both share a bitter emnity towards each other, something which their father John (Joseph Campanella) tries his best to fix.

While Will-a martial-arts instructor-is very hostile of anything political, Casey and John both work for 'The Company'-the CIA.

John has recently retired, yet is still looking for intel on terrorist Franco (Rion Hunter), something that proves fatal... 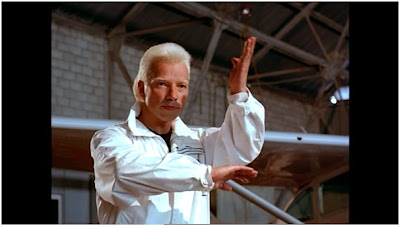 The movie opens with a group of terrorists holding a bunch of hostages in a bank. Luckily for the hostages, uber-cool CIA-man Casey Alexander is also in the bank. Needless to say, he takes care of the trash in under a minute! Having solved the crisis (with a bullet wound in his arm to show for it), Casey spends the night with a foxy gal from the bank.

It's John's birthday, and he wants to use this opportunity to mend the rift between his sons. His bithday party goes smoothly enough until Will and Casey get angry with each other and Will leaves. When the party is over, Casey offers to drop one of the attendants to their home, leaving John home alone. It doesn't take John long to realize that there are intruders in his house... 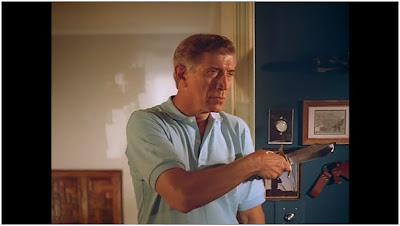 John fights as best he can against the intruders, and puts up one hell of a fight for an old man-he footy tackles a muscled thug straight off a stairwell balcony! He also has about fifty weapons hidden throughout his house that he constantly tries to use-but to no avail when Franco arrives. Franco taunts John, then throws his special blade-things at John, impaling him through the neck. Then a thug jump-kicks John, who's sent flying about thirty feet backwards, off a balcony and into a swimming pool! 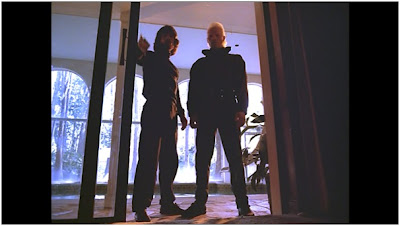 In the heat of his anger, Will forgot to give his father his birthday present. He goes back and discovers the carnage, as does Casey moments later. This leads to a 'tender' moment, where both Avedon and Vitali try to overact their best as they recite hilariously bad dialogue. 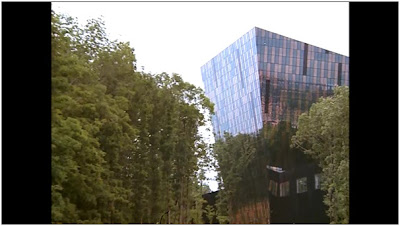 After John's funeral (which is scored to what sounds like a rock anthem in dirge form), Casey wants to be put on assignment to hunt down Franco. His boss refuses, because Casey is too connected, so Casey sneaks into the CIA's classified files section and steals the file on his father, which has parts missing. Since all files are kept on th CIA computer system in their whole, Casey approaches his friend, a flamboyant CIA tech-guy who likes to talk rough with his computer, which 'she loves.' After 'getting nasty with' the 'whore', the techie gets the files on Franco, and leaves his post, letting Casey read them. Casey is a spy, so he knows that one has to be covert with things like this, so naturally he talks to himself out loud at what he finds! 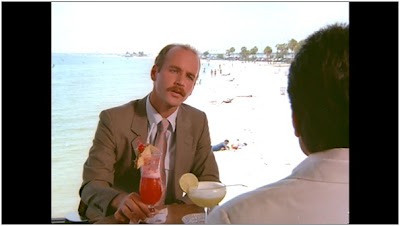 Casey, having found out that Franco is in Florida, goes to the parking lot to leave when he's ambushed by friends of the bank terrorists from the film's opening (one of whom is wearing a wig and make-up-hey, gotta make the ambush seem authentic!). He does his thing, attacking them when Will shows up out of nowhere and deals his own moves against them. Casey is trapped in his car by the thugs, but torpedoes his way out through the back window! With no momentum! Yeah, this film is TOTALLY abiding by reality!

After killing all of the thugs, Casey gives Will the printouts of the Franco file and tells him to take them to his apartment while he fills out paperwork for the carpark battle royale. Casey finishes the paperwork and goes back to his apartment, finding a note from Will saying that he's gone back home. Not believing the note and knowing that Will has gone to Florida to find Franco, Casey goes to Florida himself as fast as he can to make sure that Will doesn't get himself killed. 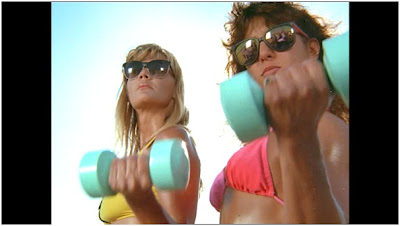 While searching hotels for Will, Casey meets up with an old friend, Maria (Wanda Acuna), who was once one of Franco's team until she defected with the CIA's help. In the meanwhile, Will gets a few of his friends to help him with a plan. Will goes to a sleazy bar, doing a tough guy impression when his friends come in, playing the part of angry thugs looking for 'Angel' (an associate of Franco's). They start to trash the bar and are 'beaten up' by Will. Angel (David Michael Sterling ) is impressed by Will's fighting skills and offers him a job. Will goes by the name 'Jesse Brody', and the moment he creates his tough guy 'Jesse Brody' persona, his own theme music starts to follow him. In the meanwhile, Casey is trying to get Maria to go back in to Franco's organization as a double agent. 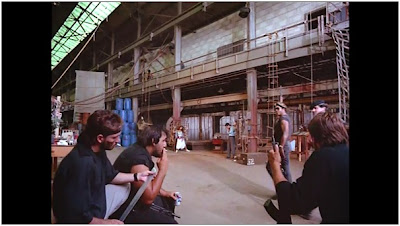 Will meets Franco, who doesn't recognize him as the son of John Alexander. Will is subjected to a few tests before Franco is convinced of his worth. For his first assignment, Will is instructed to kill Casey... 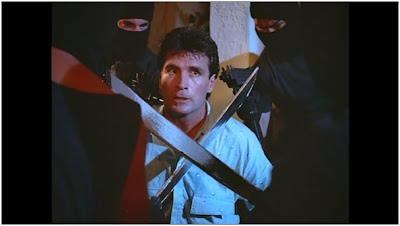 Will meets up with Casey again and 'kills him' in view of two of Franco's thugs keeping watch on him. The brothers plan to meet later, but when Will returns, he's recognized by an associate of Franco's-John's CIA replacement! Casey is captured soon after by a group of machete-henchman, and both he and Will are strapped up in restraints. Franco still needs Will to carry out part of his master-plan, so he tortures Casey until Will agrees. This scene would be a mite bit easier to take seriously if there weren't cartoon electricity lines! 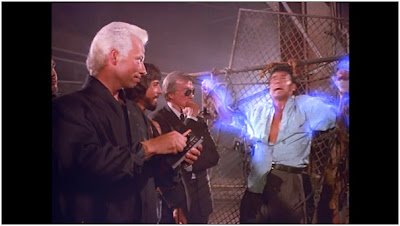 Franco want Will to go to the nearby airport and kidnap the visiting Mozambique ambassador, claiming that if he does this, he will win his and Casey's freedom. What neither Will nor Casey know is what Franco's true plan is-create a diversion attracting security away from his real target (or something like that), stock footage of President George H. W. Bush!... 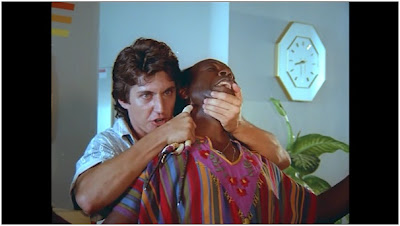 No Retreat, No Surrender 3 is a LOT of fun! Sure it's not particularly realistic (from people leaping and jumping down improbable distances to deflecting knives with a plaster cast to shrugging off serious bullet wounds as if they were bee stings) but when has that ever not been a cause for enjoyment in action movies. The acting is solid overall, though Loren Avedon's acting is a bit weak here and there during about the film's first twenty minutes. Rion Hunter makes for a great villain as Franco. Wanda Acuna as Maria though is not good at all (but this doesn't matter, since it's clear in every scene that she's not wearing a bra!) 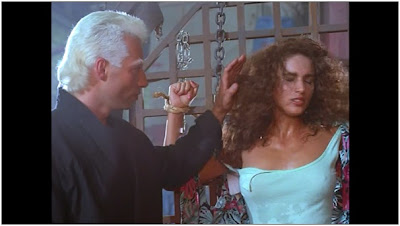 The action is great throughout, and convincing, for the most part. The story is good, especially with the brother relationship between Will and Casey-it's believable and well-acted between the two. 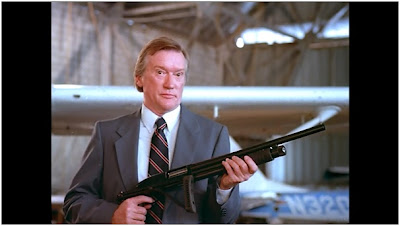 And to top everything else, the soundtrack is gloriously 80's-tastic! Sure this film was released in 1990, but it definitely shows what decade it was made in!

There are a few weird things about the movie though. For one, what the hell is up with the sky in these shots?! 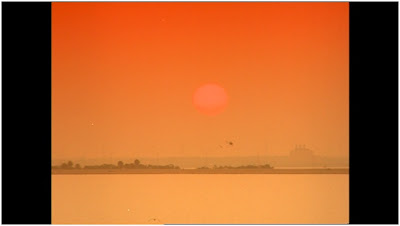 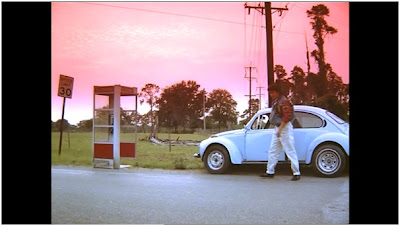 And in the ending credits, it lists all of the extras as Terrorist 1 and so on...except the person doing the numbering must have been dyslexic! 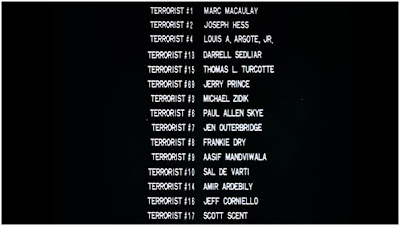 So in closing, No Retreat,  No Surrender 3: Blood Brothers is an extremely entertaining action/martial arts film that should be watched by all fans of the genre.
Posted by Chris Hewson at 1:28 AM