Strike Commando is a Bruno Mattei-Claudio Fragasso action film that has gotten a cult following over the years because of how goofy and fun it us, the constant ripoffs of other movies (mostly Rambo: First Blood Part 2), and Reb Brown's trademark yelling-while-firing-guns technique. I'm not sure how this warranted a sequel all the way back in 1988, but it got one! It also got one with Richard Harris as the main villain. Yeah, THAT Richard Harris! THE Richard Harris!

Strike Commando 2-starring Brent Huff this time round, not Reb Brown-is about Michael Ransom's quest to find his former commander from the war Major Vic Jenkins (Harris), who's been kidnapped by a group of heroin smugglers, who want a ransom of diamonds-but is all as it seeems?...

The movie open with Ransom-in an apartment in Manila-having a 'Nam flashback. We see Ransom getting shot, but he's saved by Jenkins, who rescues him from the battlefield...all in slow, SLOW motion! Ransom wakes up to the sound of a knock on the door. At the door is an old war buddy, who comes in and tries to comfort Ransom over the recent death of Jenkins. Then he breaks the news that Jenkins is still alive in the most casual way possible! 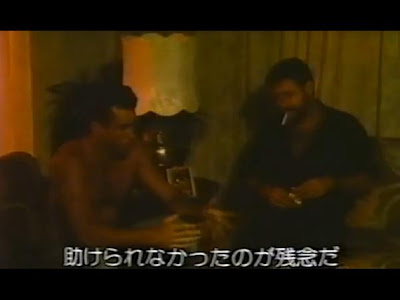 The war buddy says he has contacts in the CIA who told him this-that Jenkins faked his death for an assignment for the CIA, who he's been working for since the war ended, and now Jenkins is in some kind of trouble. He assumes Ransom is here to find out what happened to Jenkins, and after giving Ransom the info, he leaves. The army buddy is on a train where he is seen by Kramet (Mel Davidson). He runs away from Kramet, but is cornered and murdered, despite his protests that he did what 'they' wanted. 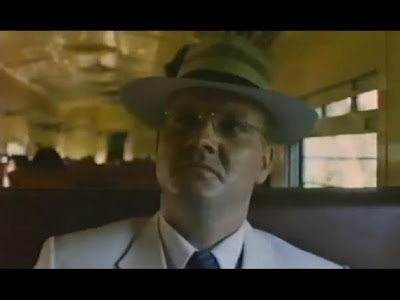 Ransom follows the lead that his buddy gave him, a CIA guy, Peter Roeg. He goes to where Roeg is and heads for his office-and armed security follows. He asks Roeg where Jenkins is, and when he doesn't say, Ransom smashes Roeg in the face with a photo of his family and grabs him in a chokehold until Roeg spills the beans. Now that Ransom knows where Jenkins' safehouse is, he evades security and heads there as fast as he can. While he tries to infiltrate the safehouse, the CIA tell Jenkins that Ransom is coming. Jenkins tells them that Ransom surely isn't coming to kill him, but that he's an old friend. 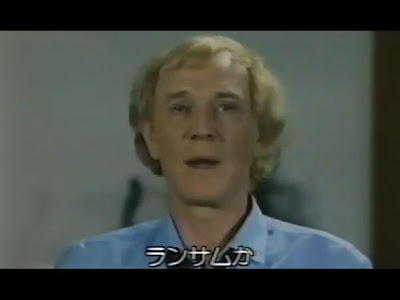 Ransom is captured by the safehouse's security, but escapes and goes to Jenkins, who tells Ransom that he's safe, but glad that Ransom's here. Outside, two security guards are shot dead by Kramet, and when security tries to radio them, Kramet picks up one of their walkie-talkies and says "We can't answer you anymore, we're dead!". After Kramet's one-liner, the safehouse is attacked by a helicopter. Ransom tries to get Jenkins free, but he's kidnapped by some goons and flown away in the copter. 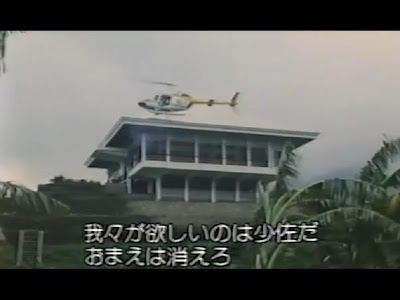 Ransom is arrested and semt to prison, until he's bailed out by Kelly Sellers (Massimo Vanni), a special agent. Sellers takes Ransom to Roeg, who explain that Jenkins knew a lot of valuable state information, and shows Ransom a tape that the CIA received-a ransom video, demanding a ransom in diamonds. Ransom is given the ransom (*sigh*) and sent to find Jenkins and get him back. Ransom goes by boat, which goes well until it's attacked by pirates. Ransom dispatches them all except for one, who's snuck up onto the boat's roof and starts strangling Ransom. If you guessed that the boat is heading towards something in danger of blowing it up, and that Ransom kills the guy by stabbing him, then congrats, you've seen both Rambo 2 and Strike Commando. Yeah, that's right, Strike Commando 2 rips off it's own prequel! 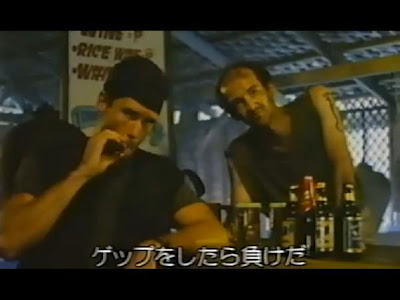 Ransom goes and finds himself in a bar-run by Rosanna Boom (Mary Stavin), who's busy playing a drinking game with a patron. After winning the game, Rosanna closes the bar and orders all her patrons out. Ransom however, stays behind to talk to her. She questions him, but before she can get far, Kramet bursts into the bar, flanked by ninjas (yes, really!). He asks Ransom for the diamonds, and when Ransom gives him them, Kramet inspects them and realizes that they are fake and crushes them in his palm. He orders his ninja lackeys to get the diamonds off Ransom by force. Ransom fights the ninjas and pushes one of them onto the bar's fireplace. The flaming ninja (hopefully a patented drink) runs around screaming and sets the rest of the bar on fire. And while all of this is happening, a nifty musical score plays that is most definitely not from this movie. 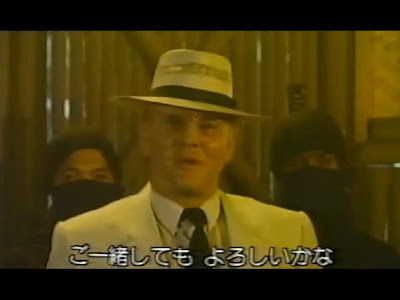 If this all (plus the screenshot of Kramet above) seems familiar, then congratulations, you've seen Indiana Jones and the Raiders of the Lost Ark. Though no, there isn't a scene where Kramet grabs the diamonds when they're burning hot, leaving their imprint on his palm. While the bartender shoots the ninjas with a rifle, and is killed, Ransom hides behind the bar with Rosanna. Rosanna shows him crates of dynamite that she has under the bar and Ransom grabs her and hightails it out of the bar, which explodes just as they escape.

Rosanna is seperated from Ransom. She tries looking for him and bumps into Kramet. Rosanna: "So now you're gonna rape me, huh?" Kramet: "I hate women!" Rosanna: "Yeah, I have a lot of gay friends too." Kramet: "I hate queers!" Before Kramet can kill her, Ransom Tarzan-kicks him with a vine, knocking him out. 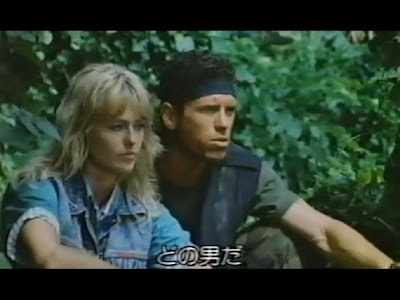 The two trek though a forest and Rosanna yells at Ransom for destroying her bar. She says that there was $10,000 stashed away in it, the bar itself was worth $20,000, and her business partner-the bartender-was worth $20,000. She tries to take one of the diamonds, but then strikes up a deal with Ransom to split the diamonds when his mission's finished and Jenkins is rescued. Ransom is looking for Huan To (Vic Diaz), a sadistic drug lord who's holding Jenkins hostage. Rosanna knows where To is and she leads Ransom to him. They case To's heavily fortified camp out, then leave. Ransom gives Rosanna the diamonds and tells her to go to Bon Tuoy Plains, because if he is found with the diamonds, he'll be killed. It's at this point in the movie when the goofy 'comedic banter' music is introduced-also, when Mary Stavin isn't yelling, she says 'goddamn' a LOT. 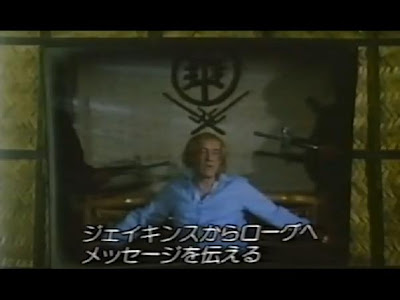 Ransom goes into the camp and takes a guard hostage. He makes the guard lead him to Jenkins. Ransom recues Jenkins and goe to leave when his hostage escapes. Somehow Jenkins manages to be in front of the guard and kills him, even though Jenkins was with Ransom, who the guard was running away from at full pelt-I guess that Harris just used his magic Dumbledore powers (which is also probably responsible for suddenly shifting the scene into broad daylight!). Ransom and Jenkins escape, but Ransom is double-crossed by Jenkins. Rosanna spies this through the bushes and escapes. Ransom questions Jenkins as to why he's doing this. Jenkins says that he's sick of the government considering him as expendable and a necessary target due to the state secrets he knows. Ransom calls bullshit on him and just thinks that he's in it for the money. When Ransom refuses to work for him, Jenkins tells Kramet to torture the location of the diamonds out of him... 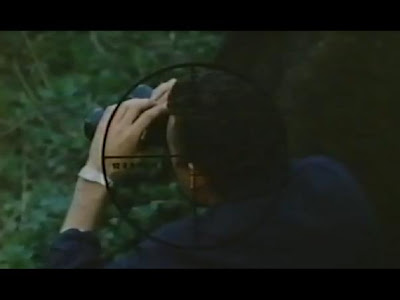 And then immediately after the mention of torture, we cut to a hooker-truck driving into the camp, with he most lighthearted music that Bruno Mattei could've found playing! Rosanna is in the truck as well, disguised as a hooker. While the other hookers go around choosing their men, Rosanna is chosen for Huan To. To tries to seduce her, then gets violent, and while To is about to look into the bag with the diamonds, Rosanna stabs him in the back. Meanwhile, Ransom is being tortured by Kramet, with electricity and bad puns-"I have a shocking surprise for you!". Ransom gets Kramet in a leg-grip and knocks him out, then escapes. Rosanna is just about to be decapitated by a ninja when Ransom comes and casually blows the ninja away with the massive sentry machine gun he's now armed with. He hands Rosanna a machine gun and drags her out of the room before she can get the diamonds from To's dead hands. 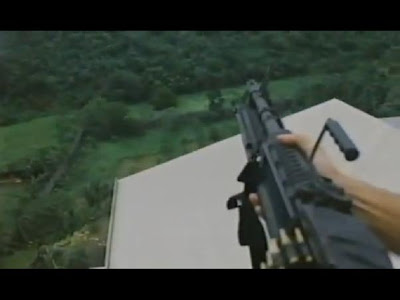 The duo both shoot the guards, then Ransom picks Rosanna up and throws her in the back of the truck. He gets in the drivers seat and speedily escapes. Unfortunately head henchman Jimmy (Ottavania Dell'Acqua...I think...) and a band of ninjas were hiding in the back of the truck. While Rosanna is bound and gagged, the ninjas climb the sides of the truck to get to Ransom. Ransom swerves the truck into trees, knocking both waves of ninjas off the truck. Then Jimmy climbs onto the truck's roof and boots Ransom out of the truck via the driver's seat. Ransom, still holding onto the door, manages to climb onto the truck's roof and he boots Jimmy out of the truck, the same as Jimmy did to him. Ransom drives for a bit more, then stops. He goes to the back, gets Rosanna out and unties her. This leads to the funniest scene in the movie... 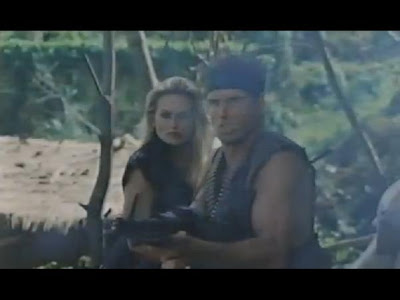 This movie is great! It's certainly not a good movie, but it is hella entertaining! The movie is a comedy (on and off past the half-hour mark) and when it's not having the goofy banter scenes between Brent Huff and Mary Stavin, it's ripping off not only Raiders of the Lost Ark, but also Strike Commando, which in turn rips off Rambo 2. Huff is fun as Michael Ransom, Mary Stavin is scary, and yes, Richard Harris is really in this movie! Mel Davidson makes for a fun villain, even though he only successfully kills someone at the start of the film. 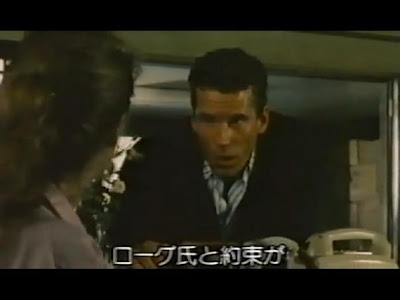 As a sequel to the hilarious Strike Commando, this doesn't compare, mainly because it's clear that this is in no way connected to the first one! This film tries to be funny, and I'm not sure if it's naturally funny, or if the humour's so bad that it comes around and becomes funny. The film is full of goofy overacting, bad dubbing, hardcoded Japanese subtitles and VHS quality (which both add to the feel of movies like these) and great action scenes (Which may or may not be original to this movie, Bruno Mattei does tend to use stock footage from his own movies).

If you're a fan of goofy 80's action movies, give this a watch. And by 'give this a watch', I don't mean find and buy the DVD, no, that is beyond impossible! Probably the only way to watch this movie is youtube. So here's the link, enjoy!