David Cronenberg's Scanners is a semi-famous cult film, in part to do it's imaginative story and great special effects. Naturally this warranted a slew of sequels-and spin-offs in this case.
Scanner Cop follows the original film's premise. Because of a morning-sickness drug called Ephemerol, the children of the drug's users developed powerful telepathy. Most go insane though, due to 'sensory overload'. 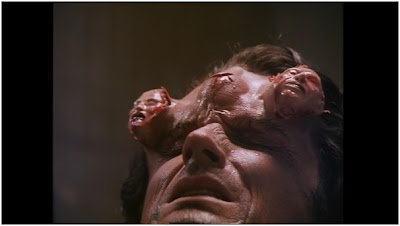 The film starts off with young boy Sam and his father. The father hasn't taken Ephemerol-which acts as a scanning supressant, allowing scanners to be free from their curse-in over four days, and his sanity is dwindling. After seeing three heads push their way out of his head, the father screams, attracting the attention of the approaching police, who were called by the building's landlord to investigate the apartment, as the man and his son have been locked in there for days. 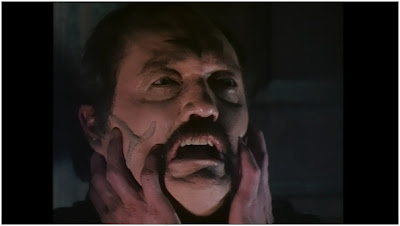 The cops try to get Sam away from his father and the father throws one cop through the wall and starts to vein-pop the other, Pete Harrigan (Richard Grove), but is stopped by Sam. The father stops just as the landlord comes in and kills him with a shotgun. Harrigan consoles Sam and eventually offers him the choice to be taken in by he and his wife, which Sam accepts 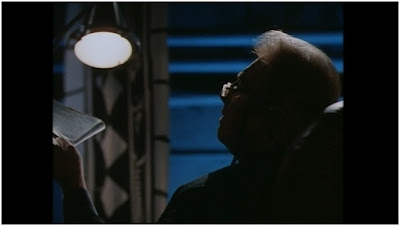 Several years later, Sam (Daniel Quinn) has graduated onto the police force, of which Harrigan is the commissioner of. Sam goes around on the beat with his partner and takes in a few drug dealers. Sam takes Ephemerol every day to keep his affliction at bay. Things aren't good for the police though, as several are being killed-all by random people, who hallucinate and see the police as other things i.e. Death, gangstas, the aliens from Starship Troopers. At first the police don't see a connection, but when a taunting tarot card is left at one of the crime scenes, they realize that these cases are all the work of one man. 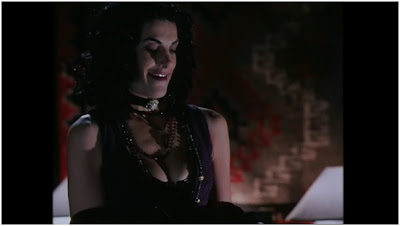 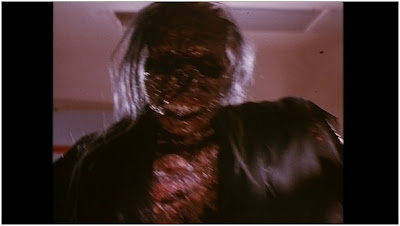 Sam is in the station's locker room, being questioned by his partner, who witnessed Sam using his powers to stop a criminal (he'd forgotten to take his pills that morning). Before Sam can say anything, the Manchurian Candiate-ed janitor comes in, sees the cops, grabs a shotgun and shoots several cops, including Sam's partner. Sam is shaken and agrees to use his powers to catch the killer. 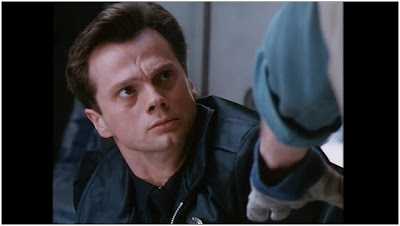 First Sam tries to get answers by scanning Pratt. He catches glimpses of Pratt's memory at the time of the murder and sees what Pratt was seeing-the spectre of death! Sam leaves the room to freshen up and everyone follows. After Sam tells Harrigan, Joan, and the skeptical Lieutenant Harry Brown (Mark Rolston) of what he saw in Pratt's mind, they get word that Pratt has killed himself. After realizing that police uniforms must be the trigger that sets these brainwashed people off, Harrigan issues an order that all officers are to be in plainclothes. This doesn't work however, as a cop goes home to his wife, Sarah Kopek (who's been brainwashed by Richard Lynch) and she sees his badge and stabs him to death... 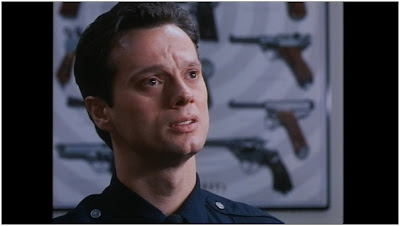 Sarah, just like Pratt, is catatonic and Sam scans her. He sees Zena and where she took Sarah, but nearly at the cost of her life, and Joan angrily drags Sam out of the house and yells at him. Both Joan and Harrigan want Sam to take his pills, but Sam refuses to until he's solved the case. Sam drives around gathering his thoughts until he starts to recognize landmarks from Sarah's memory. He finds Zena's fortune parlour and gets a palm-reading session with her. She starts reading him, then Sam starts scanning her for information. She doesn't reveal anything but Sam manages to find out what the mysterious man looks like. He leaves the parlour and scans an identikit until it produces the exact face of the man he saw, a face that Harrigan recognizes... 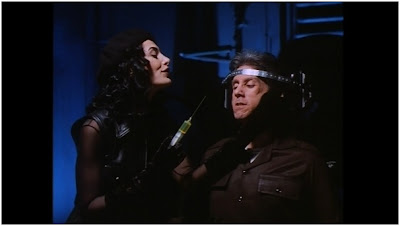 The man is Karl Glock, a neurosurgeon who was fired and stripped of his medical license after he was found to have been conducting unauthorised brain experiments on patients. He was soon wanted by the police after kidnapping several teenagers (the movie says so, but they look willing to be with him) and experimenting by giving them drugs. A police squad led by Harrigan raided his hideout just as he was about to test drugs on the teens. He ran, killing a couple of officers and was shot by Harrigan. Despite having his skullcap blasted off, Glock survived and was sent to Chatsworth Intitute, where he recovered quickly and befriended a doctor. He convinced the doctor that walks would be good for him, and he and the doctor went on many, discussing everything to do with neurosurgery. One morning, security found the doctor murdered, a pen stuck in his ear, and Glock escaped.

Now that the culprit to the cop-killings has been found, Harrigan wants Sam to take his pills again, but Sam refuses to until the case is over. This is starting to be a problem for Sam though, who's condition is worsening, leading Joan to worry about him. The police raid Zena's parlour but find nothing but a taunting tarot card. 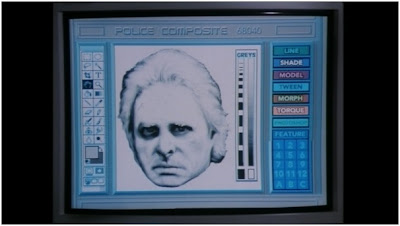 Zena kidnaps Lieutenant Brown and she and Glock brainwash him into viewing Harrigan as Glock. Back at the station, Sam sees Brown and realizes that he's been brainwashed and desperately tries to beat him to Harrigan's office. Brown beats him and shoots Harrigan, and is in turn shot by other cops. Harrigan survives and is sent to the hospital. Joan argues with Sam about him not taking his Ephemerol, but Sam zones out midway, hearing the thoughts of Zena outside the hospital on a payphone talking to Glock. 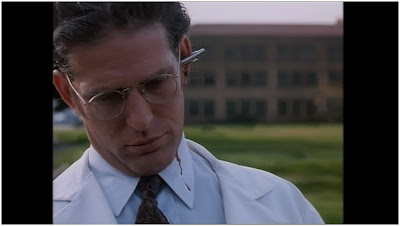 Sam chases Zena outside the hospital, and she runs straight in front of an ambulance. *sigh*
Horror Film Survival Lesson No. 327778: DON'T RUN IN FRONT OF FUCKING AMBULANCES!!!!
She starts to die, but Sam goes into her mind and finds himself in a hellish mock-up of the Chatworth Institute. Zena tries to take over Sam's body, but he successfully defeats her. Now back in the real world, Sam goes back to Zena's parlour to find Glock. He finds a secret door and runs through the hidden passageway until he literally falls down a trap door right into Glock's secret base! Glock straps him to the brainwashing chair and starts to program him to kill his own father!... 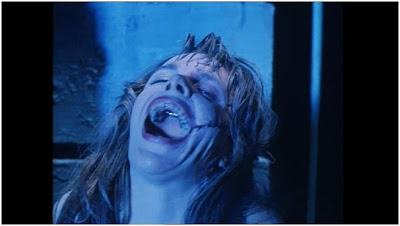 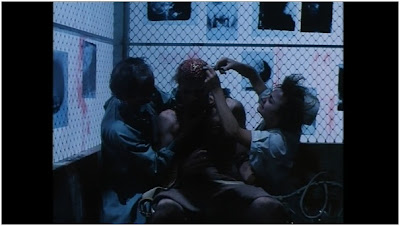 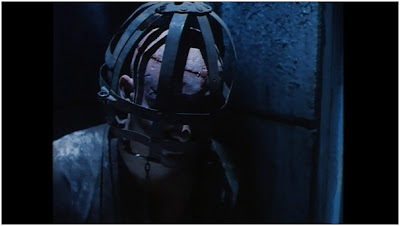 Scanner Cop is a great film, very well made, and it's pretty disturbing in places too (moreso on the first viewing though). And it has fantastic practical effects, just like the original Scanners! It just goes to show that while big Hollywood directors still use CGI because it's cheaper than practical, despite their multi-million dollar budgets, low-budget films like these still use practical, uncaring of the cost. The acting is good enough throughout. Daniel Quinn is good as Sam and Richard Lynch plays a great-and creepy-villain as usual. The story is very intriguing and the movie as a whole is very watchable. 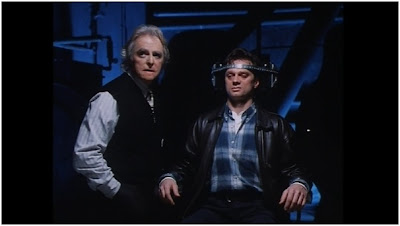 So in conclusion, Scanner Cop is a fun, sometimes disturbing horror/cop film and more than worthy as a follow up to Scanners. 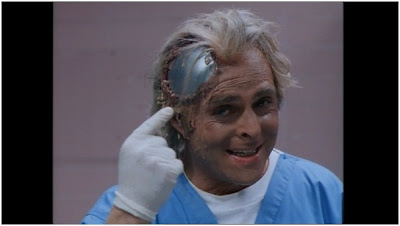 And of course, what would a Scanners film be without a headsplosion! 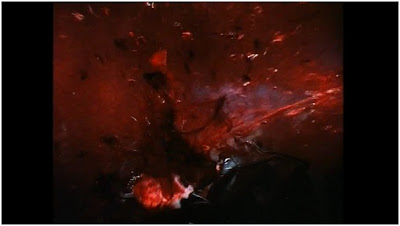