You probably thought I was joking when I mentioned Urdu Pumpkinhead in my Mahakaal (Hindi Nightmare on Elm Street No. 2), but no, it's actually a real movie! (It's not actually Urdu though, I just call it that for variety, rather than keep saying Hindi This, Hindi That, Hindi Dracula, Hindi Turkish Star Wars, etc.).

If it wasn't for IMDb, I'd probably have no idea what Roohani Taaqat is about, or where it's plot is going. As IMDb tells, it's about a town that's home to a sorcerer, who summoned a demon for the villagers to destroy their enemies. Afterwards, the villagers vow never to summon the demon again. Years later, a bunch of tourists arrive at the town, and a woman, whose husband was killed by Jujubehead, has learned he ways of 'tantrik', and is now a sorcerer herself, hell bent on taking the demon down.

Roohani Taaqat (I think it means Black Magic) opens with a recap of a demon running amok and a bunch of townspeople, narrated by an overdramatic narrator. Since I'm watching this movie the only way I can unless there's a subtitled DVD of it out there somewhere, I'm watching it unsubtitled, so I will of course have no idea what is being said at any point in this movie. 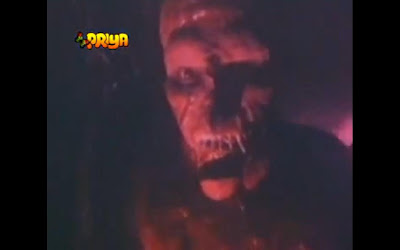 After the weird and sudden prologue of overacting sorceresses, hilariously bad hag make-up, and a demon with his mouth sewn shut, the film starts off properly, with a group of tourists from the city going to this demon town. The see a sign for a guest house, and go to find it. Meanwhile, the overacting sorceress is laughing like crazy.

The film then decides to be schizo. When the tourists arrive at the guest house (I think) and meet Jagdeep, the weird Indian comedian who was in Khooni Murdaa, as well as many other Bollywood horror flicks. When the comic interlude is over, it's followed by another comedy scene! At this rate, Indian Pumpkinhead's going to be dancing alongside Jagdeep while cracking jokes about Lance Henriksen! 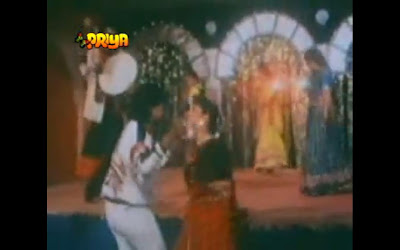 The film's first Bollywood musical number starts up, and luckily it's a merciful four (and a bit) minutes, as opposed to six or longer, like numbers like these tend to be in these movies. When it's all over, the sorceress arrives at the guest house and talks to a couple about something that happened to her (I think).

While a couple talk, some guy is at the evil hag's place (and while he's talking, the camera constantly swoops around the hag, quick cuts more than a Jason Bourne film, and zooms in and out on her face repeatedly). The hag summons the demon (in a very cool-albeit brief-scene), and it goes after the couple and kills the man. The woman screams at the townsfolk, and I guess that this is where they vow to never use the demon again. 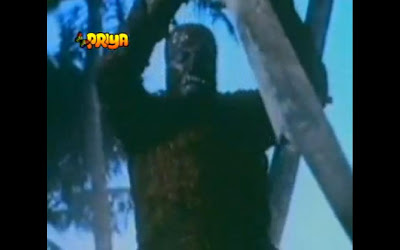 The lady finishes her story telling about how she encountered the hag who summons the demon (who's actually a guy in this, unlike in Pumpkinhead) and was scarred across the side of her face. Then the movie decides to be a goofy comedy again, with a scene with Jagdeep, a woman, a guy with really weird hair, and a pregnant guy with Dame Edna glasses...Um, yeah...WHAT AM I WATCHING?! 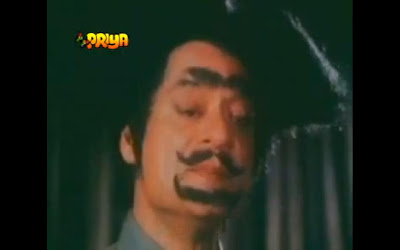 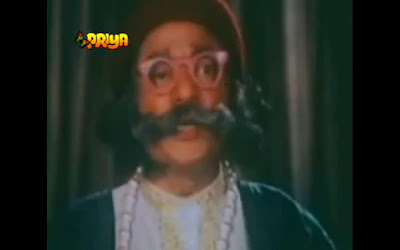 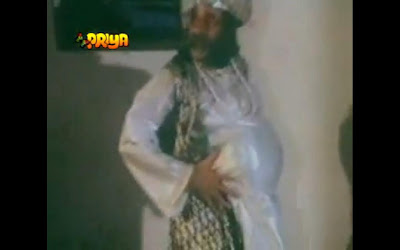 After the comedy scene, the film cuts to Guy and Girl, a couple who've been romantic to each-other since the start of the film. They talk, and then the film decides to focus on music again. When that's over, the film switches back to horror again, when three of the tourists break into Girl's house and rape her, leading her to commit suicide. 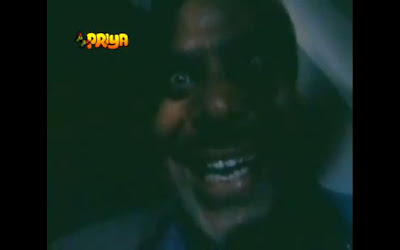 Guy (played by Kiran Kumar, the same guy who played Ranjit in Khooni Murdaa) finds Girl's body (in a scene so dramatic that it changes the camera's colour filter) and, distraught, yells at the townspeople. He then drives off to a hill, where the hag resides. Ed takes his son's body with him to the...oh, wrong movie. Guy takes girl's body to the (muppet lookalike) hag, who performs a ritual. Guy (since I don't know his name, I'll be calling him Ed Harley (Lance Henriksen's character from Pumpkinhead) for the rest of this review) then goes out and digs up the skeletal body of Hindi Pumpkinhead and takes it to the hag. 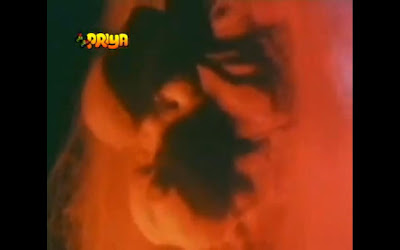 Meanwhile, the three rapists escape jail in a laughably easy way! They were kept unrestrained, in a doorless room, only guarded by two unarmed guards who had their backs turned. The whole town shakes, and everyone, realizing that the demon has risen, run away and hide. As for the rapists...well let's just say that they don't swerve to miss the oncoming Pumpkinhead! 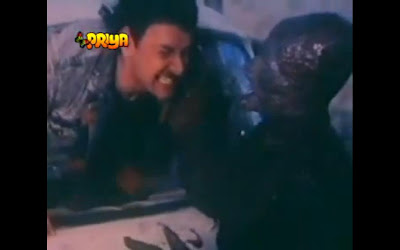 After dispatching the rapists, the demon begins killing indiscriminately all across the town, namely a random couple. The guy runs off up a staircase, tossing a constant stream of carboard boxes and barrels in the demon's way, and he gets to the buildngs top, and luckily for him, Pumpkinhead can't telepor...oh wait... And as for the girlfriend, she is the very definition of 'incompetent'! With Pumpkinhead on her tail, she comes across a locked gate, but she's on the side of the lock, so surely she can just pull it open. Well she tries badly, them she decides to jump the lock, then she tries the lock again...which just pulls straight open easily! The reason Pumpkinhead hasn't caught up with her yet, thanks to his slow 'stalker walk' is probably because he just wants to see if she's too dumb to operate a simple lock! A group of people find the girl's body, but are fooled by some pumpkin-terfuge.

EDIT! Umm, what was I on about with a lock in the above paragraph?! I either meant something elss, or I got confused while writing that! haha!

So, in the midst of this massacre, what would be 'better' than ANOTHER comedy scene! Look movie, I get that this lady sleeps around and constantly has to hide her boyfriends from each-other while all are in the same room. I got it the last time you interrupted the movie to show me! The lady then hears something, goes over to the window, opens it and everyone sees Pumpkinhead!...Which segues into a musical number! *sigh* Let me say this as calmly as possible. IF THERE'S A MUSICAL DANCE SCENE WITH CHARACTERS WHO JUST SAW PUMPKINHEAD, WHY IS HE NOT INCLUDED?! I want to see Bollywood Pumpkinhead bust a move! 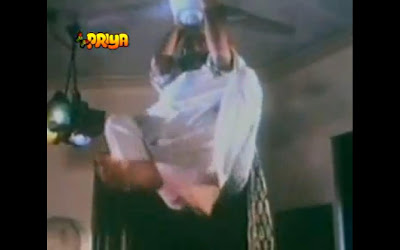 But the movie gods must have smiled on this movie, because it follows with the Weird Hairdo guy and the Dame Pregnant Dude guy in a Three Stooges-style slapstick scene with Pumpkinhead! This is amazing! More music follows (but Pumpkinhead vansishes), and then the movie tries to whiplash its audience to death by switching straight back to brutal horror!

Harley soon realizes his mistake (thanks to ghostly means), and he tries to stop the demon. Also after the demon's blood is the crazy sorceress, who tosses a few magic fireballs at Pumpkinhead, and takes him into space and blows him up...um, yeah... 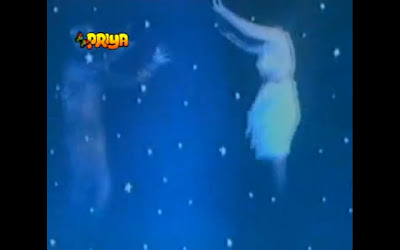 That's nowhere near the end of the movie though, there's still Half. An. Hour. Left! But at least it's a half-hour where Pumpkinhead gets ahold of a rifle! And a chainsaw! He must have taken some cues from Ash Williams!... 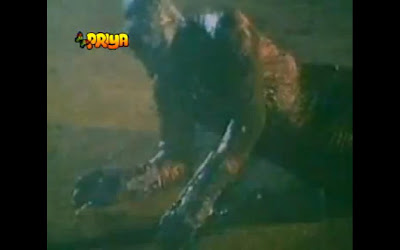 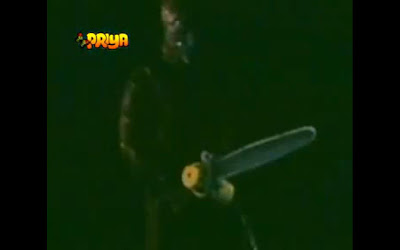 Roohani Taaqat, while fun, is heavily plagued by Rule 24. The film, while two hours long, is a bit less boring than other Bollywood horrors, because the plot is simple-a demon is rampaging in a town at night-and it doesn't really allow for sparse lengths of nothingness...Except for the first 45 minutes of the film, where next to nothing interesting happens! Also, with the urgency that this movie's plot goes along in the last hour, I though that it'd actually drop the comedy scenes and song-and-dance tunes. I was wrong!

Luckily, the film's musical numbers don't go past the six minute mark, like in Mahakaal and Khooni Murdaa. But it apparently decided to make up for that lack of sadism and include weird-as-hell comedy scenes, peppered all through the movie, in the most unwelcome places!

I haven't actually seen the original Pumpkinhead, so besides the plot outline and the climax , I wouldn't know how strong Roohani Taaqat rips it off. As for the demon himself, he's no Pumpkinhead, but he's still pretty cool. Especially when he gets ahold of weapons, and when he gets a cool Kool-Aid Man "Oh Yeah!" wall moment!

So to conclude, unless you want to see a film of this type, are curious about how a Bollywood rip-off of Pumpkinhead would turn out, or are just looking for a better Pumpkinhead movie than P 2: Blood Wings (an unofficial, totally unrelated sequel, and a pretty terrible movie), then I can recommend this, but if otherwise, I wouldn't.