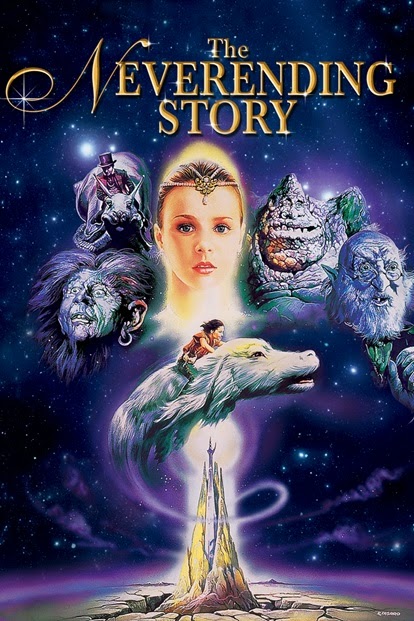 The NeverEnding Story is one of THE landmark fantasy films of not only the 80's, but all time!...and I only saw it last night on TV. Yeah, I suck, don't I! I've seen Krull, and all four Deathstalker films, yet I haven't seen this?!

Bastian Balthazar Bux is an imaginative kid, but also sad from the recent death of his mother, and persecuted by bullies. One day, he escapes them by hiding in an old run-down book store, where he finds out about strange book The Neverending Story...which he promptly steals (you're a dick, Bastian!). He starts reading the adventure of warrior Atreyu in his quest to save the land of Fantasia from destruction by a mysterious being known as The Nothing. At first, Bastian is simply enthralled by the story, but soon enough, he comes to realize that the book is more than just a story...

Author of the book Michael Ende was none too happy with this adaptation, as it only covers the first half/third of the story, dumbs down certain characters a bit, and doesn't even include certain ones. Ende was angry enough to file a lawsuit against the production company responsible for the film. I understand why he was pissed off (especially given that the movie lacks the reason why the story's even called The NeverEnding Story), but I myself prefer the film's take for a couple of reasons. 1, This still tells a complete, well-rounded and thoughtful story, 2, It's more interesting having the only villain of the film be the borderline Eldritch abomination The Nothing rather than also having a human bad guy, and Three, I just like the plot better this way, without the rest of what's in the book.

However, this is not an adaptation withough issues. For one, the ending is really abrupt!...And doubly stupid. Most glaring is the complete absence of Bastian's father, and the book-keeper after their respective scenes! We don't even find out their names (the same goes for the rest of Bastian's), and the names are a bit of an aspect in the book (Bastian Balthazar Bux, Carl Conrad Coreander). When it comes to those characters, the movie is really lacking.

And speaking of names, with the climax, where the hell does Moonchild come from? It's the name of Bastian's dead mother, but the movie neglects to tell us this (not that you can even hear the name all that well thanks to the music, and the storm)! Though I suppose this doesn't pose an issue if you don't know about that from the book, because in that case you're probably just assuming that Bastian made up the name himself from his night-time surroundings.

Bastian isn't in this movie a whole lot, as he's just reading the story, rather than directly involved in the action. While he's technically the lead, Atreyu is by default the main character, as the majority of the movie focuses on him. As for Bastian, whenever he's onscreen, I found myself face-palming a lot. Due to the bully harassment, he's late for school. It's dumb that he doesn't just go into the classroom and say that, but ok, I'll bite, he can wait for the next class to start...But he never does! He goes into a musty attic and reads the Neverending Story until school's over. And then does he leave when he sees everyone else doing the same? Hell no, he goes back up into the damn attic! And he stays there all night! What the hell, you dumb kid?!

That's enough of the negatives. Onto the good aspects of this movie. The plot is very good! The Nothing is a good concept, and it's much better than a goofy villain mugging for the camera ever could be. There are some fantastic dramatic scenes, like the one with Atreyu and the Rockbiter, and the loss of Artax (which is also pretty funny actually, given the way the horse looks throughout the scene).

The acting is fine all-round. Noah Hathaway is very good as the Native American Indian warrior Atreyu. There's just one tiny problem, though...HE'S FUCKING WHITE! And there's also the fact that his exit from the movie is very abrupt. The moment the Empress starts talking to Bastian, Atreyu's just gone. The next and last time we see him is a brief cameo from afar.

Barret Oliver is ok as Bastian. He doesn't do enough in the story to be an interesting or well-rounded character, as far as I'm concerned.

The rest of the cast (including a terribly dubbed Deep Roy) are fine, especially Alan Oppenheimer as many characters, mainly Falkor the Luck Dragon, who's adorable!...And looks nothing like a damn dragon! When I was a kid, I always thought he was a flying dog!

The creature designs are very good, and extremely creative! The effects, minus sub-par green-screen work, are all very good. The effects can look a little animatronic-y at times, but it''s still light years better than CGI.

All in all, I absolutely recommend The NeverEnding Story! Why did this movie have to end?! Couldn't they have at least made sequels?!...oh wait, they did, and they were awful. *sigh*...
Posted by Chris Hewson at 6:16 AM