Hi all. I'm here today with some quick thoughts on a few crappy films. Why just thoughts, and not full reviews? Well I saw these movies years ago, and while I still very much remember what's bad about them, I'd still want to rewatch it if I was going to write a proper review of it, and I do NOT want to do that!

I'm talking about this before Bloodsport 2 because I want my review of that to be my final word on the series, rather than following a review for a great film with one for the boring piece of shit sequel! 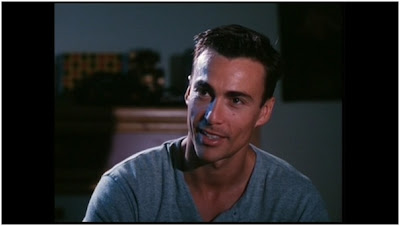 In Bloodsport 3, winner of the Kumite (underground fighting championship) Alex Cardo (Daniel Bernhardt) is just livin' life when his friend and mentor Sun (James Hong) is murdered by a ruthless crime-lord (John Rhys-Davies)...

First I'll get the positives out of the way. The return of Pat Morita as Mr. Leung is cool, and a nice bit of continuity, although he's not in the film nearly enough. I like that the mentor character is the Kumite judge from the previous film, and the film has a framing device akin to the one in Bloodsport 2. 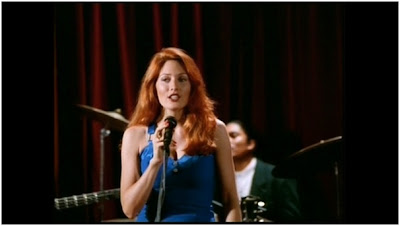 As for the negatives, this film is BORING! It drags on interminably, it pointlessly kills off Sun, the whole movie is pretty much Alex training, even though he was already akin to a god in martial arts in Bloodsport 2 (and the training he receives is crazy, like having deadly arrows shot at his head, or having to manhandle cobras!), there's a baffling part with magic, Sun's death scene is just bizarre, it pointlessly introduces a daughter of Sun's, which comes completely out of nowhere, never having been seen or mentioned until this film, and the ending moral is stupid!

The fight scenes are decent from what I remember, but they have no soul or heart to them. And they come so late in the movie that you'll likely have stopped caring at that point.

The acting is pretty eh. Daniel Bernhardt is a good actor when not in Bloodsport 4, John Rhys-Davies is decent as the villain, and the main female character is a real looker if I remember correctly, and the actress is good, again, if I remember correctly-Maybe she's actually awful and I just can't remember. Can't say I particularly care enough to find out. And finally, the actor playing the brute of the film for the final opponent is ok. He's huge, but has zero presence. 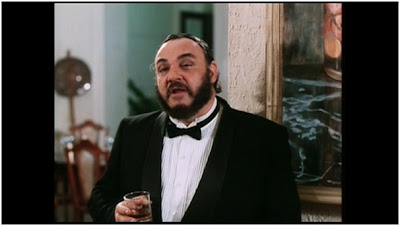 The Bloodsport sequels really run the gamut, don't they! We've got a great movie (2), an entertainingly bad one (4), and a painfully bad one (3). My advice is watch Bloodsport 2, and stay far, FAR away from this awful sequel!

Woo! The original killer ant movie!...And unfortunately it's a dud.

Leningen (Charlton Heston), a plantation owner in South America, has been sent a mail-order bride (Eleanor Parker) by his brother, and Leningen is frosty towards her, wanting nothing to do with her. Gradually, they get closer**, but their new marriage might not last that long, given the stirring of the Marabunta in the forest-Army ants!...

I don't like this film for a number of reasons. One is that the character of Leningen is an annoying, sexist, asshole! For various reasons, but the one I remember most is when all of his plantation's workers are leaving en masse in some boats (the only way to leave the plantation, I think) because of the soon-approaching army ants. Leningen gives a speech and chews them out, then when they all go back inside, he says to Joanna "They'll stay tonight out of shame, and they'll stay tomorrow because I'm going to destroy the boats." What an asshole!

From what I remember, the character of Joanna is decent-ish. Nothing special, nor does she rise to the occasion and make this movie watchable.

The romance is pretty crappy. It's barely there, and there's barely a moment when Leningen likes Joanna (**'Gradually they inch closer'-But only by a freakin' inch!)

The killer ants aren't even mentioned until the hour point! Yeah, it takes a whole hour for killer ants to be even brought up in a killer ant movie!

And when the killer ants show up, things don't get better. They get much worse!

You see, the reason why stuff like MacGyver-Trumbo's World, and Marabunta (Legion of Fire: Killer Ants! to you Americans) are effective is that they're set in isolated locations with only a bare handful of characters, so the threat of millions of killer ants is immense. However, in The Naked Jungle, literally everyone at the entire plantation is on hand to fight the killer ants. Way to crush all suspense from the movie! There isn't a fun climax at all. The hundreds of workers just kill the ants with ease and that's it!

The acting is pretty meh. The hypocritical jerkass dickhead Charlton Heston is very stiff and weird in the way he looks and talks as the insanely unlikeable Leningen.

Ultimately, this movie tried to be two genres in one, and because of that, and other reasons, it failed, big time.

Oh, and if anyone would like to tell me that I'm a popcorn fool for expecting killer ants when I should instead be watching a 'marvelous treatise on the intricacies of male and female interactions, and the dominant power of nature and man's struggle therein', none of that matters when the movie sucks! And newsflash, you know what the source material for this movie is about? Killer fucking ants! And it lacked many of the movie's problems. Thank God MacGyver took inspiration from there, not this dreck!...

Wow, 3 really is the cursed number when it comes to films. Superman III, Spiderman 3, The Dark Knight Rises, Iron Man 3, and countless others, including *grr* Rush Hour 3! *grits teeth*

Detectives Carter (Chris Tucker) and Lee (Jackie Chan) are back for a third outing to find the would-be Triad assassins who tried to kill Lee's old friend Council (now ambassador) Han, and are after a mysterious list...

My biggest problem with Rush Hour 3 is that the film is just plain mean-spirited  Not only are Carter and Lee at each-other's throats at the start of the movie, thanks to a trite in-between-movie 'break-up', but remember Isabella from Rush Hour 2? According to this movie, at some point between the two films, Carter accidentally shot her in the neck, crippling her physically and mentally. HAHAHAHAHAHAHAHA!! COMEDY! HAHAHAHAHThat's not fucking funny!

The comedy's mostly lame and unfunny, and borderline disturbing! I swear I am not joking when I say that there's a scene where Carter and Lee are anally raped by Roman Polanski! The two are detained at an airport by French police, who don't want them on their turf, so Polanski does an extreme cavity search. The scene would have been uncomfortable enough if there was just a normal actor in the role of the spiteful French cop, but the fact that it's played by Roman Polanski, supposed Very Bad Thing, and statutory rapist, just tints the film poorly

There are overused jokes like the 'Who/Hu' one, which I probably would chuckle at if in a better movie, and if Carter didn't literally draw his gun at the unarmed man he's caught in a misunderstanding of words with!...Ok, I don't think that actually happens, but given other scenes in the movie, can you blame me for remembering the scene that way?!

The stupidest scene by far is when Carter and Lee are trying to chase down a car or something, and they get in a taxi with a guy who doesn't like Americans all that much...And Carter pulls out his gun, points it at the cabbie's head, and makes him sing the Star-Spangled Banner as he drives! What the hell kind-of world is this movie set in, because it sure ain't the real world!

There are some funny scenes, and decent aspects here, like when Carter stumbles into a burlesque dressing room and pretends to be a flamboyant instructor so he can see some French bootay, and I like that Carter now fully understands Chinese. And I also dug the return of Soo Yung, now older, although I dug that less once I found out that it was a different actress.

The acting is also still good. Jackie Chan is great, as is Chris Tucker, who some find to be an annoying actor, but I find him hilarious, and here is almost no exception.

I don't recommend Rush Hour 3. It's pointless, annoying, unfunny, unpleasant, and the movie was even too lazy to come up with an original song for the duo to groove to at the end, and instead reuses Edwin Starr's War from the first movie.


So that's my thoughts on a few films. Avoid all three of them if you can!...
Posted by Chris Hewson at 9:51 AM