If there was ever an unholy stamp of evil for films... 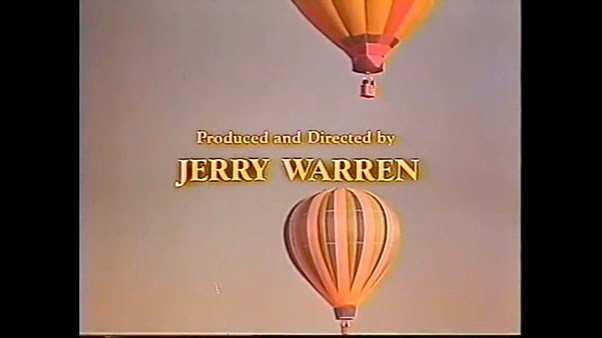 ...this would be one of them...at least, that's what I've heard. Jerry Warren was a B-Movie director, infamous for films such as Wild World of Batwoman, and Man-Beast. Today, I'll be talking about two of his most derided films-Teenage Zombies, and Frankenstein Island... 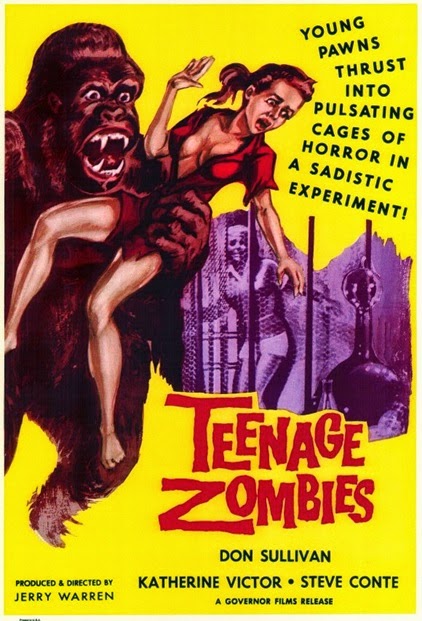 A group of teens are keen on water-skiing, and on the advice of a friend, they check out an island. Strange things start happening to the gang when they arrive-They see a mob of people in a trance-like state, and their boat goes missing. They approach a house, where Dr Myra, a hostile scientist lives. She captures the teens, intending on using them as guinea pigs in her twisted experiments for the COMMIES!...

Teenage Zombies is really more of a mild political thriller than it is a horror film. The zombies are little more than controlled people, rather than the Romero kind, and serve no horrific purpose in the script. They're just here to rough up the heroes, and cart them off to cells. 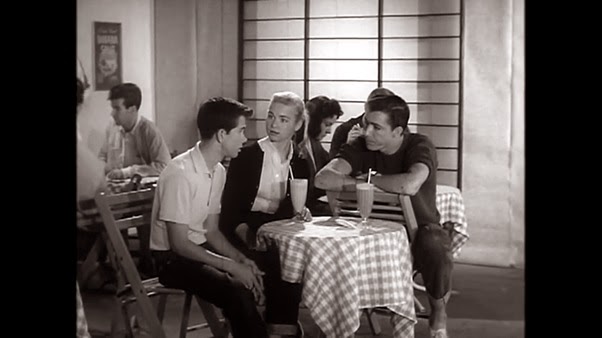 The film isn't really particularly suspenseful, as you can basically guess how it'll turn out-Very happily. I'm not sure if that was because of the Hays Code, or just general teen B-Movie cliche trappings, but either way, it's not a hard film to read.

Teenage Zombies is only 70 minutes long, but that's not exactly indicative of a breezy watch when it comes to awful films from this period. Manos was shorter, and we all know what kind of a ride that movie is! But thankfully, this move is never boring, and it gets into gear very quickly. 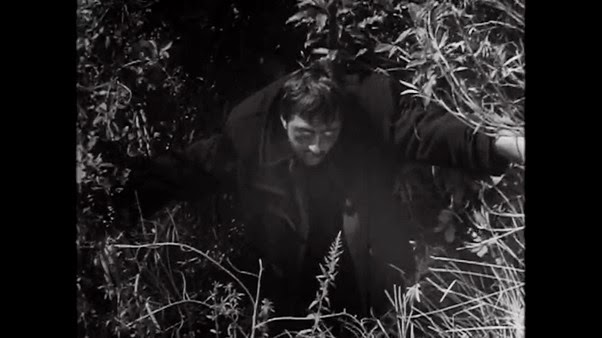 The acting's mostly decent. There are a couple of badly acted laughs here and there, but overall, there are no terrible performances. Jerry Warren regular Katherne Victor plays the evil mad scientist-You can tell she's evil because her fridge has windows on it! What a monstrous freak! And associated with her are two Russian agents who speak with broad American accents.

The set-work here is pretty cheap, there's lots of choppy editing, and there are numerous Ed Woodian moments on display. In one scene, the two male teens, having escaped from the cell without alerting the villains, search the island for the boat, then decide to build a raft, all under the cover of the brightest night you will ever see! Seriously, there's not even an attempt to make it seem like it's really nighttime! The sun's shining, and Mr. Blue Sky is there to stay! 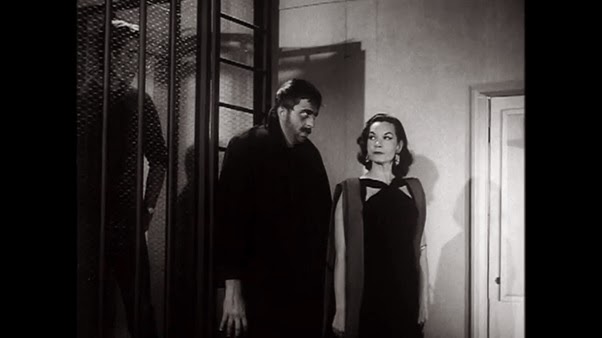 There's a scene where someone gets shot, and there's no wound effect at all! The actor just puts his hand to his chest and falls over. And the final battle is hilariously choreographed. It's not terrible, but it's still very cheaply done.

The finale is a real oddity! It starts with a brief fight, then about twenty minutes of the characters reverssing the zombie effects of two of their friends, by going step by step in the most long and drawn out way possible. It's like the fight in They Live, in how ridiculously protracted the scene is!

The ending is pretty abrupt, and pretty goofy! It's like if you mixed Archie and the gang with The Atom-Age Vampire! 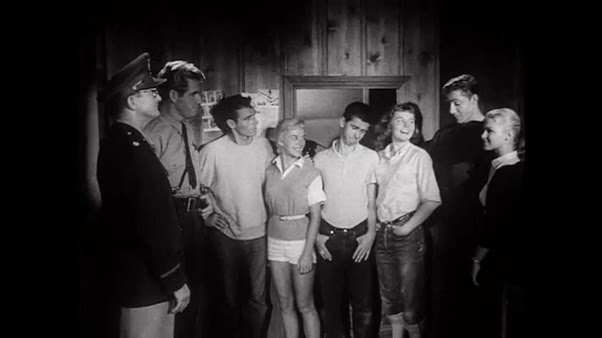 A line from the movie says it best. "I swear, Skip, you remind me of a walking comic book!". That's a pretty apt description of this movie. I wouldn't exactly recommend Teenage Zombies, but it's entertaining fluff, and if you're in the mood for a 1950's B-Movie, you could do a hell of a lot worse than this. 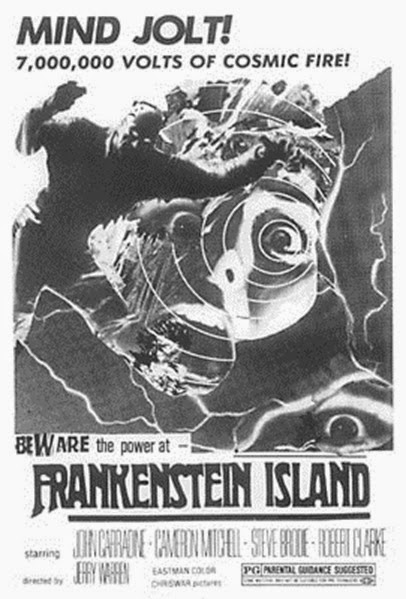 A group of men in a hot air balloon race are swept off course and end up on an island, where they encounter many strange things. Talking about places causes baffling excruciating pain, a tribe of women live here are constantly harassed by mysterious men, and atop the hill is the descendant of the late Dr. Frankenstein, who's using the girls for insidious experimentation. She gains the trust of the doctor of the group, teaching him the island's history, and showing him the valued end result she yearns for with her experiments. Meanwhile, the rest of the gang decide to stop the mad doctor, rescue the women, and get off the island... 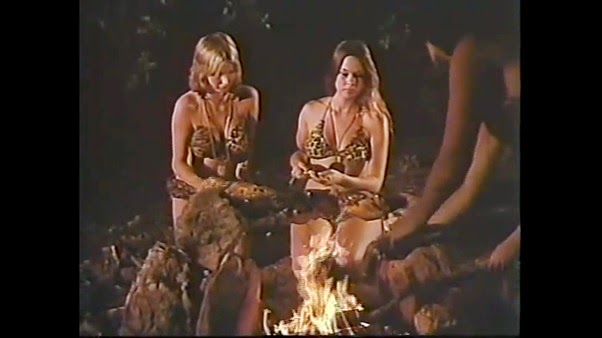 Frankenstein Island in many ways, is like Lost, except good. Thanks, Mr. Warren, you made a story about a diabolically mysterious island with many strange things and properties, some supernatural, and some scientific, and it was better thought-out than Lost!

The plot here is pretty barebones, and the characters are constantly under-reacting to things like crazy! They're so lax that I almost recommend the movie for their attitude alone! As for atmosphere, there's so little horror in this film that I'd be hard pressed to even call it horror.

like idiots, they don't do anything to stop Sheila when she goes off into another room to summon Frankenstein's Monster. 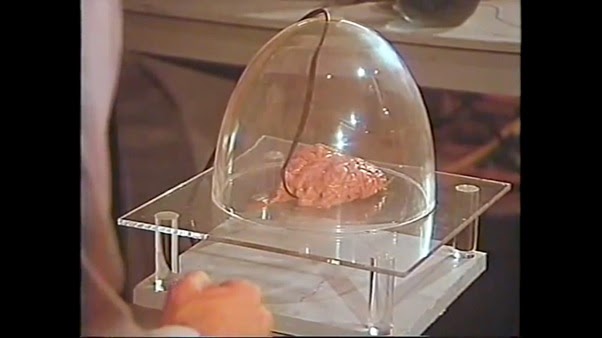 This is a step up from other films of the time period with Frankenstein in the title, in that this actually is about a Frankenstein. Sheila, in particular.

Sheila Frankenstein?! And her married name is Van Helsing, but she doesn't like that one all that much. And as far as we the audience is concerned, she's not a very effective scientist, only relying on the help of her constantly bedridden 200 year old husband, a bearded dick, a one-eyed constantly drunk lout who laughs constantly, and the philosophically incorporeal spirit of her dead father. She also has a backup emergency security system in the form of Frankenstein's Monster. How does the Monster fare in this movie, you ask? He grunts a lot, constantly swats around like he's blind, and does nothing but throw down during the climax battle royale. 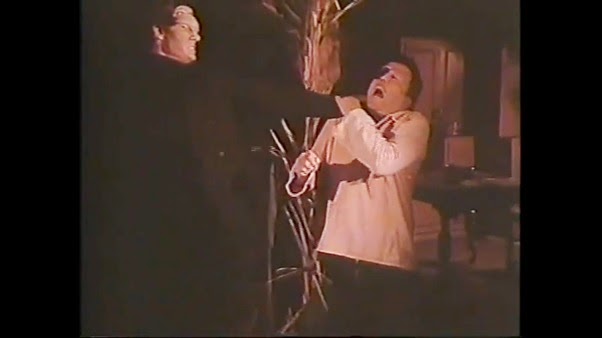 As for the original Doctor himself, John Carradine turns in one of his 'Trojan horse' appearances* for an extended cameo, showing up every now and then as a giant head apparition, spouting off philosophically about THE POWER!! And Cameron Mitchell's performance as the kinda-crazy guy constantly quoting Edgar Allen Poe is pretty bizarre. The man would never turn down a film role!

*Wherein Carradine is filmed talking for a few minutes extra footage to slap into a twenty year old film, or a current one, for the name recognition. He may only be in this movie for less than a minute, but did you know that John Carradine is the star of Frankenstein Island?! And as we all know, DVD's never lie... 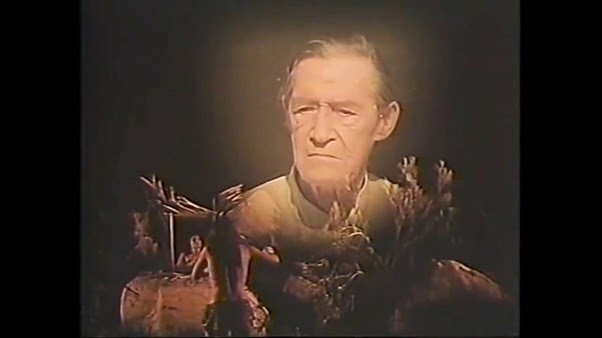 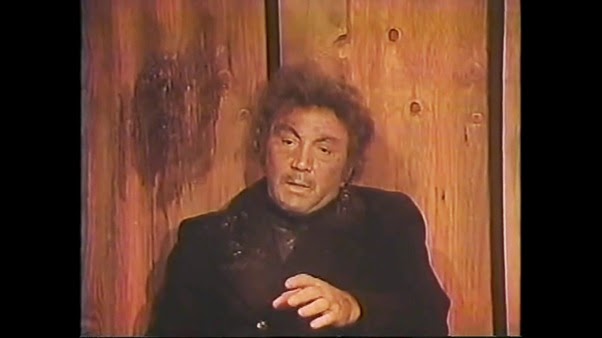 The acting is all-round bland. Nothing terrible though, minus the guy playing henchman Jocko, and an actress's delivery at screaming about an hour in. Katherine Victor is ok as the villain, but nothing special.

On display here is a mix of not-so good fight choreography and lack of sound effects for connecting hits. However there's a fire-dance scene which is actually impressive. The California-set 'island' doesn't look very convincing, given the kind of flora all around, but I'm willing to give the movie the benefit of the doubt and assume that an island could look like lower California. Geography isn't my strong suit. 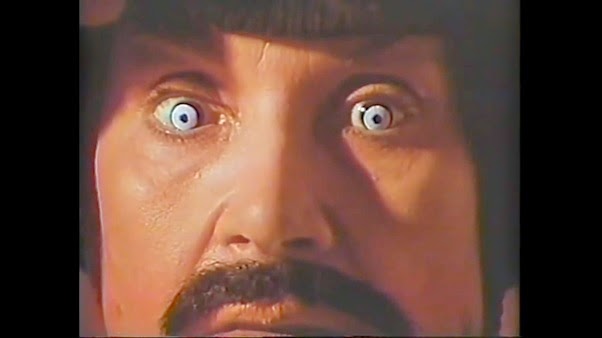 The effects are pretty mediocre, but passable-ish for a B-movie. Also, from the outside, the Frankenstein abode looks like the director's house rather than a stately gothic mansion, which doesn't exactly do wonders for the imagination.

Everyone and their mother has pointed out that despite being made in the 80's, this has the film stock of a B-movie from the 50's (probably because Jerry Warren never replaced his camera). The film's editing is choppy, but that could just be a problem with the print I watched, as could the in-and-out overexposure every now and then.

At the 88 minute mark, the film abruptly shifts to a totally different scene several...days? weeks?...later, and it feels like it's missing the proper ending. Either that, or Jerry Warren was sequel-baiting. 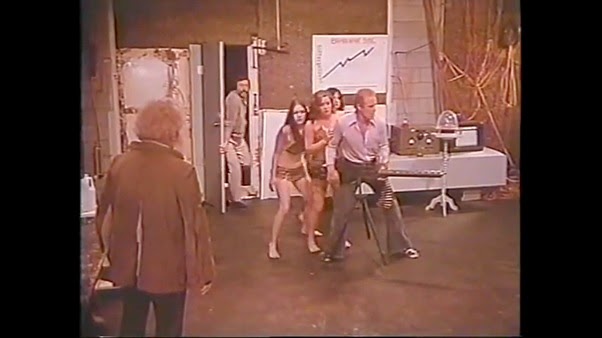 While not a remake, Frankenstein Island bears several similarities to Teenage Zombies. Both involve a group of characters getting stuck on an island, where a female mad scientist Kat Victor is experimenting on people to make sorta-zombies, and there's both a hulking brute, as well as a huge brawl at the climax of both movies.

Frankenstein Island is a watchable film. I would in no way recommend it, but if you have nothing to watch, then it's a solid 100 minute time-waster

So there's my thoughts on a couple of Jerry warren films. Neither were nearly as bad as I was expecting (I'd heard Teenage Zombies was one of the worst movies ever made from a reliable source). I'm pretty curious what delights/horrors Wild World of Batwoman has in for me. I'll find out soon enough, when I start my MST3K reviews... 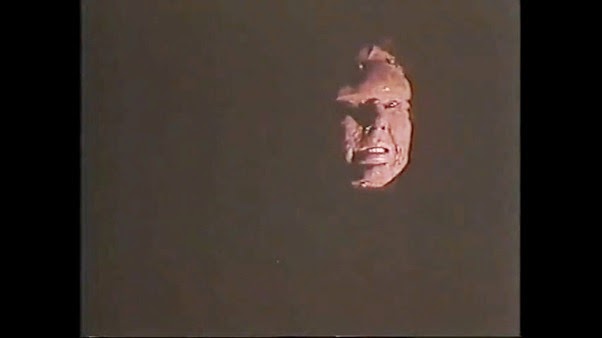