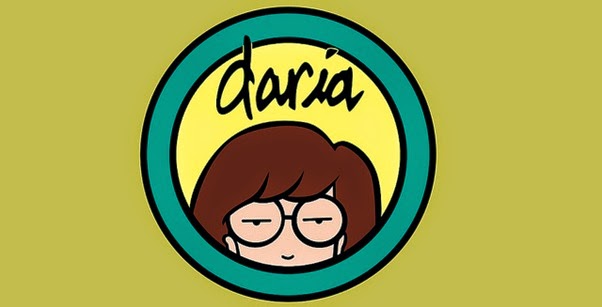 Ah, Daria. One of the quintessential shows of the '90's!-A popular comedy cartoon about the high school life of sarcastic monotone teen Daria Morgendorffer. I used to watch it quite a bit when I was a kid, but I probably didn't get even half the jokes, and was all-round too young to appreciate what I was watching. Last week, I got the full series DVD out of a library, and have had a marathon of all 67 episodes! Now that I've properly watched Daria, I feel empty knowing that there are no more episodes to watch...

The show is frequently hilarious, and the only episodes that aren't very funny (minus the two fantasy ones-more on those later) are so because they're more dramatic and/or emotional. Daria portrays high school perfectly. This is a show definitely best watched post-high school, when one is able to look back and reflect on their time there, although obviously it's perfect for teens too. 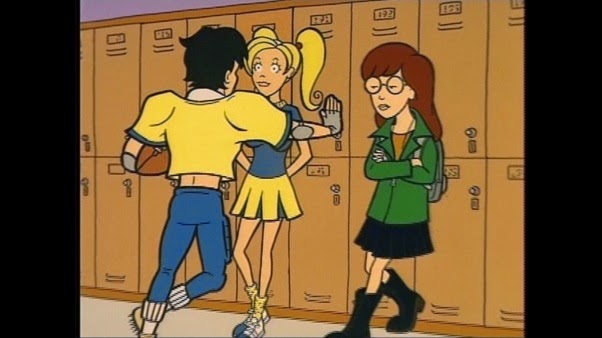 The characters are all fantastic, from the acerbic Daria, her workaholic mother Helen, high-strung father Jake, fashion-obsessed sister Quinn and her fashion club, Daria's cynical artist best friend Jane, dumb jock Kevin, ditzy blonde cheerleader Brittany, the sensitive Mr. O'Neill, the constantly angry and stressed-out Mr. DeMartino, misandristic Ms. Barch, and many, many more. The characters can definitely be exaggerated at times, but they're very relatable, and many people can point and say exactly what kind of a person they and their friends were in high school by pointing at whichever Daria character they best resembled. As for me, I was definitely like Daria! (Although I was marginally more successful in keeping to myself in my later years of school than Daria ever is). I went through the same feelings as she does. Yeah, I may have missed out on some really good things by being a loner, but I honestly feel like they weren't necessary for me, and that my attitute was right...Granted, the fact that I'm part of Gen Y didn't exactly help matters. Have you ever tried talking to a Y'er about books older that ten yearsErr, I mean books period?! Etc, etc, etc, lots of Gen Y sucks-At least where I went to school anyway. But enough about me, this post is about Daria.

There are 65 normal episodes, and two TV movies-One in-between Series 4 and 5, and the other the show's grand finale. If I have to pick a favourite episode, it might be Is it Fall Yet?, the first TV movie. That's probably subject to change over time though.

There are only two bad episodes of Daria in my opinion, and they're both completely superfluous from the rest of the series, as they're baffling out-of-place fantasy stories! One's a musical, and the other is about Daria helping the holiday spirits of St. Patrick's Day and Valentine's Day capture three rogue holidays who escaped from Holiday Island! What?! On their own, they're not technically bad episodes, but they're just not funny, and unequivocally not Daria. 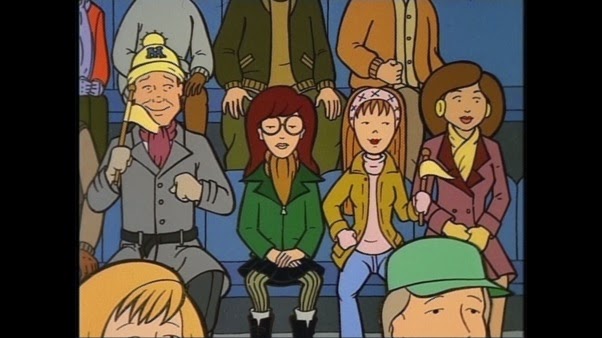 The animation for the show is very good, and most definitely a more visual treat than the show the character of Daria originated from-Beavis and Butthead! (Not to trash B&B in any way, mind you).

The soundtrack by Splendora is pretty good too. The main theme You're Standing on My Neck is great, as are the songs from the two TV movies. Not exactly the longest or most complexly written of songs, but that's understandable, since they're for a TV show, not an album.

And finally, Daria hasn't just been a great show to me, but its final season actually got me thinking about going to college. So Daria may have actually literally changed my life! Take that for what it's worth!

I really did mean it when I said I felt bummed out that I have no more episodes of Daria to watch, and I almost feel it'd be a crime removing the last disc from my player! I will tomorrow though...Because I'll be marathon-ing the first half of the series again! As for you readers at home, if you aren't already a fan of Daria, I wholeheartedly recommend it to you if it's your kind of show!...
Posted by Chris Hewson at 8:59 AM