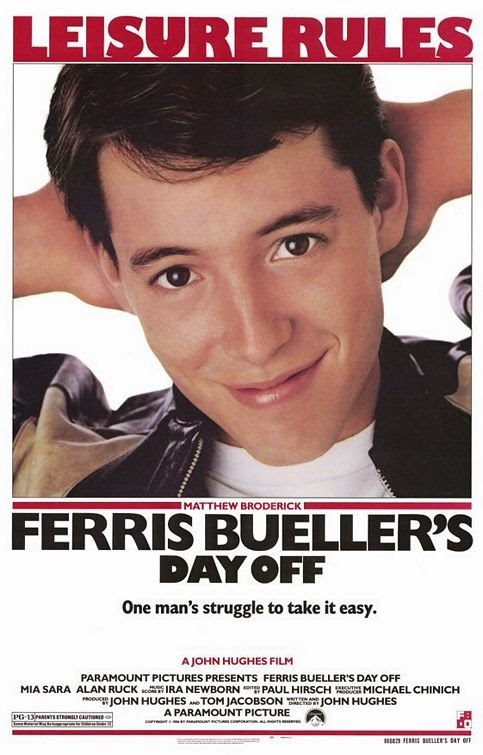 John Hughes was a great writer, and has penned many of the best teen movies ever made, from The Breakfast Club, Pretty in Pink, Some Kind of Wonderful, Sixteen Candles, to the movie I'll be reviewing today, Ferris Bueller's Day Off!...

Ferris Bueller is a freespirited teenager. He believes in living life to the fullest, and hates the thought of people wasting the time they have. He's especially worried about his best friend Cameron, a neurotic wreck, made so by his miserable home and harsh and controlling parents. Ferris fakes being sick in order to give Cameron a great day out, and along with his girlfriend Sloane, they head to Chicago city to paint the town red, in the treasured ferrari of Cameron's father. Meanwhile, Edward Rooney, Dean of students at Ferris' school, is convinced that he's up to no good, and investigates, while Ferris' grouchy sister does the same...

The plot and dialogue to Ferris Bueller's Day Off is very well-written, with both humour, and heart, resulting in a fantastic coming of age story. The hilarious comedy all hits the mark. Part of it is thanks to the writing, and part due to the fantastic acting. Edie McClurg, for example, is hilarious! Ferris Bueller's Day Off is more than funny though, as it has a really good message. There are plenty of people who view it as a brilliantly philosophical movie on how to live your life, which is basically 100% accurate!

There's not a single bad performance in this movie! Matthew Broderick is a great, charismatic lead, while Alan Ruck nails the neurotic Cameron, Jennifer Grey is hilarious as the acerbic Jeannie, Jeffrey Jones is deliciously evil* as Dean Rooney, Mia Sara is gorgeous and entertaining as Sloane, etc.

*Funny, it seems that at least two other reviewers have used that exact phrasing to describe the character! Just goes to show what a great job Jones does!

The city of Chicago is just as much a character in this movie as anyone else, and it is beautiful to behold! I deeply envy any and all who live there! Granted, you guys do have monsters to deal with in the windy city, as well as an annoyingly renamed Willis Tower (I still call it the Sears Tower, as it should be!).

The soundtrack to Ferris Bueller's Day Off is extremely varied! So much so that there was no official soundtrack released to accompany the movie, as John Hughes felt that songs like Danke Schoen wouldn't mesh well with ones like Oh Yeah by Yello. As for the film's scoring, it's very good, and fits nicely with things, especially Cameron's epiphany at the movie's climax, and other moments.

The only problem I have with Ferris Bueller's Day Off is what happens to the ferrari at the end. After Cameron's epiphany, I felt the scene was complete, but then it kept going! And he could believably stand up to his dickhead father for putting a few miles on the odometer of his precious car, but standing up to him after said car goes out a freakin' window?! Cam's father is gonna kill him! And really, what dumbass keeps their car directly in front of a large borderless window?!

One last thing to talk about before I wrap this review up. There are some people who have strange and annoying theories about the movie. Some speculate that Ferris Bueller doesn't really exist, and is a figment of Cameron's imagination, and others think Ferris is an emotionless, remorseless sociopath and the most selfish character imaginable. In my opinion, people with theories and ideas like that, 'pardon my french', come across as people who haven't actually seen the movie! People who ascribe to the former have completely missed the point of the movie, and people who think the latter clearly haven't watched the movie at all, because they are unequivocally dead wrong!

Ferris Bueller's Day Off is a fantastic movie, and extremely rewatchable. The movie is a fun day out that really leaves you feeling good. So in closing, if you're a valet/parking garage attendant, and you get the responsibility of a red hot ferrari, would you take it out for an awesome joyride like the ones here do? I know I would! For a $5 dollar tip, asshole, would you expect anything else, Ferris?!...
Posted by Chris Hewson at 10:45 AM