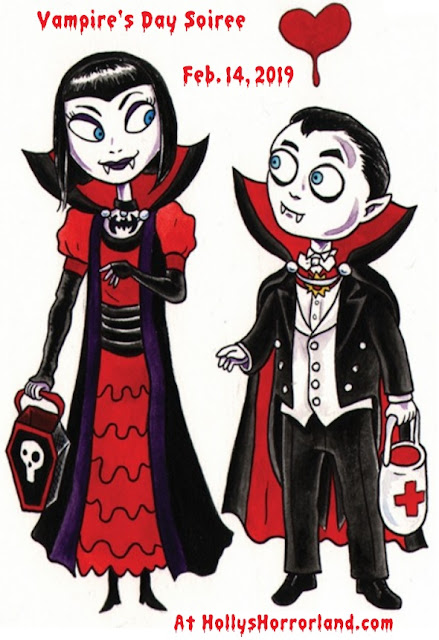 It's that time of year again. Valentine's Day, which in this neck of the woods means vampires! The Fabulous people of Holly's Horrorland and Little Gothic Horrors are once again hosting, and it's my pleasure to once again discuss a vampiric oddity from a country far away... 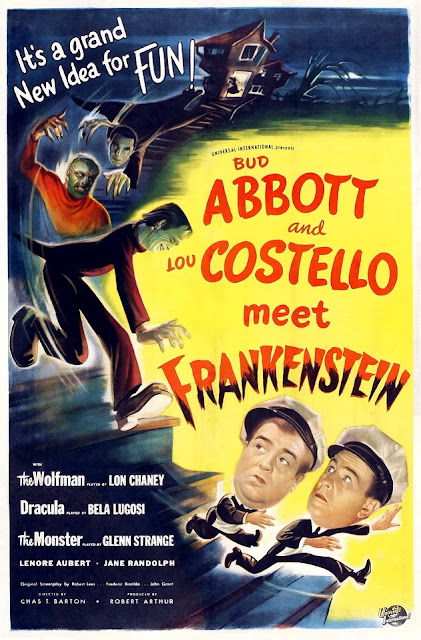 Postal workers Wilbur and Chick deliver a couple of mysterious crates to a wax museum of horrors. These boxes supposedly contain the remains of the real Count Dracula, and Frankenstein's Monster. This is proved unfortunately true when they come back to life, almost scaring Wilbur to death. He tries telling Chick what happened, but isn't believed, until werewolf Larry Talbot comes onto the scene, bringing dire warnings... 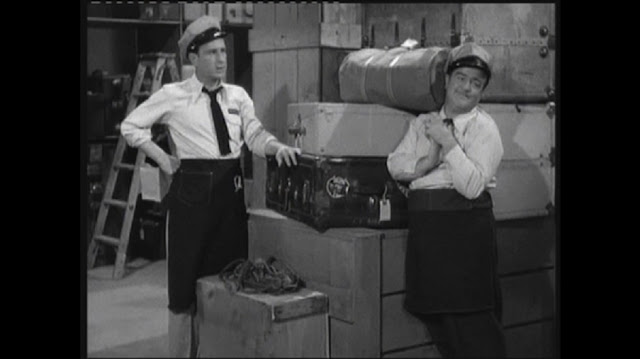 Abbott and Costello Meet Frankenstein is lauded as one of the most popular horror-comedies of all time, as well as one of the greatest Abbott and Costello films, and one of the best Universal monster movie, which it served as a coda to. A lot of expectation to live up to! For most people it does, but I didn't enjoy it that much. It's by no means bad, but I guess there were just a few things about this that bugged me, and ultimately brought the experience down. I felt that movie focused a little too much on Bud and Lou and not enough on the monsters, who drive the plot, yet get comparatively little screentime. The movie's already a decent length as it is, so being longer probably wouldn't be the answer, but better pacing and writing, in my opinion at least.

The final battle is interesting in that we don't actually see a lot of it, but are on the periphery as Bud and Lou are trying to avoid it, unsuccessfully. On one hand it's pretty annoying that a lot of the film's only monster battle is offscreen, but I think this still works in its own right, especially given the monster brawls that had become plentiful in previous Universal outings. 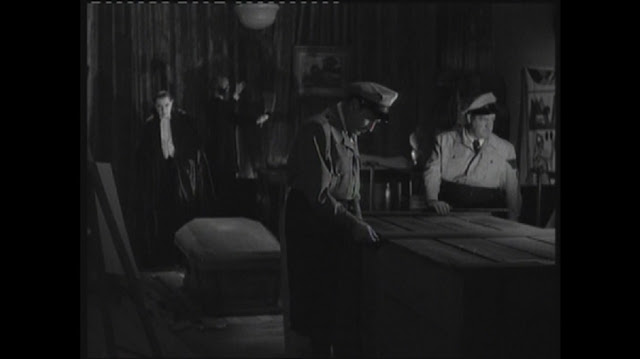 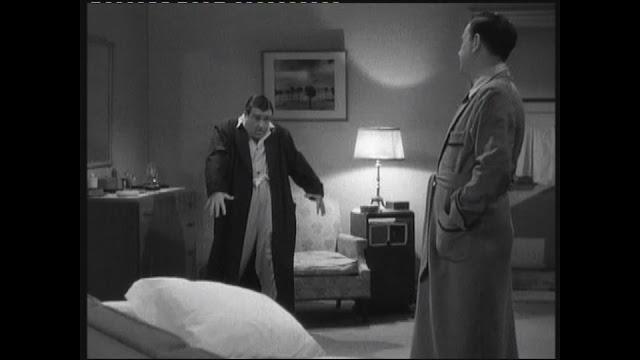 The ending to ...Meet Frankenstein really bugs me though. There isn't one! It just stops after the climax, quite abruptly. I find it disappointing, though the wonderful parting joke is enough to lessen the blow, and make sure you leave the film with a smile on your face.

The characters here are mixed. The biggest problem is that there are too darn many of them! There's the main duo, the three monsters, Sandra, and the two young lovers. The latter two are the ones who feel the least necessary. Neither really do much, despite their seemingly important roles (lab assistant in the spooky castle, and dogged insurance investigator, respectively). Wilbur and Chick are both fun, with just the right level of childlike naivety, and skepticism, with neither overstaying their welcome. 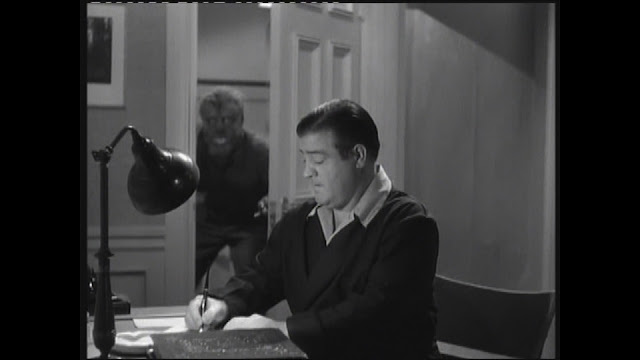 The Frankenstein Monster gets to do the least, since he's strapped to a gurney for most of the film, only getting to really cut loose in the last few minutes. The Wolf Man is more active in his furry persona, but not by a whole lot since he's gotta revert back to good old Larry Talbot, who's a decent cipher to the supernatural events, even if a little crazy at times. Dracula gets the most, what with being the master villain.

Sandra is an interesting character. For a start, she's fictional Lou Costello's shockingly attractive girlfriend, so you just know she's got to have some sort of ulterior motive. And boy does she ever! (You know how it is, when the girl who dotes on you so much is really only interested in using your brain to revitalise a bedraggled monster). She even orders Dracula around! When Dracula gets ornery at her later on, you believe her when she says her will is as strong as his. Unfortunately the screenwriter evidently didn't, as she's successfully hypnotised, and spends the remainder of the film as a mindless dummy, only to be killed unceremoniously at the end...Well, I say unceremonious, but I mean on a character level. Visually it's quite spectacular! And shockingly final for such a goofy comedy! 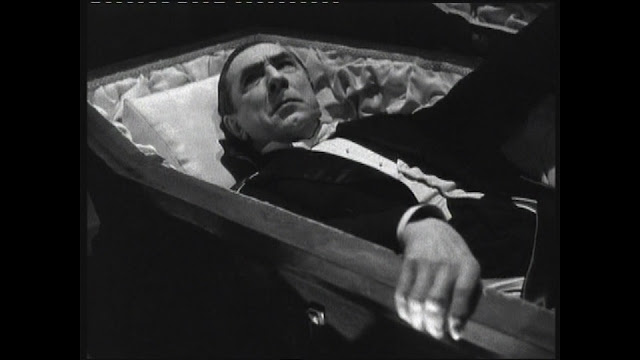 The comedy here is spot-on! The dialogue flies by at a breakneck pace, and is almost hard to keep track of sometimes.
"You’re making enough noise to wake up the dead." "I don’t have to wake him up.  He’s up."
"Whenever the full moon rises I turn into a wolf." "Oh, pal. That's all right. I'm sort of a wolf myself!"
"What was that?"-"The wind."-"It should get oiled."
"Dracula is Dracula! And Sandra's gonna use my brain to make a bigger dummy out of the other dummy."

The movie looks fabulous! It's got an abundance of spooky old scenery, including an old castle that just so happens to be on an American island. There are a few moments of animation, such as the fun credits, and moments of Dracula's bat transformations, which are pulled off quite well, and are visualised seamlessly (I suppose they had to animate backwards to synchronize it with Lugosi's movements). The music also sounds great. The score gets across both mirth and genuine atmosphere. 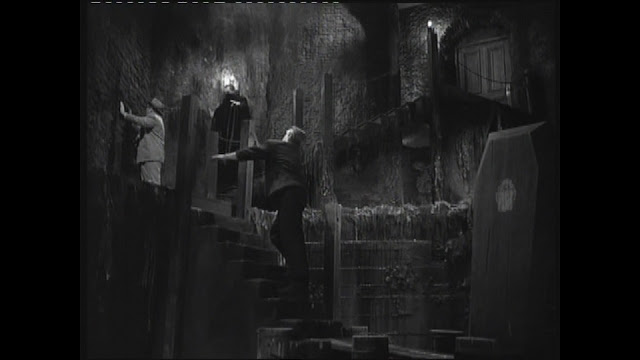 Lastly, the acting. The titular boys are great! Costello can get a little shrill and loud at times, but is otherwise really talented, as is Abbott, who plays off him perfectly. Meanwhile, Lon Chaney Jr. returns as /Larry Talbot/the Wolf Man, as does Glenn Strange as Frankenstein's Monster (his third outing), and Bela Lugosi returns to the role that made him famous, 17 years later.

While I'm not the biggest fan of this film, it's still a classic, and I highly recommend you seek it out!... 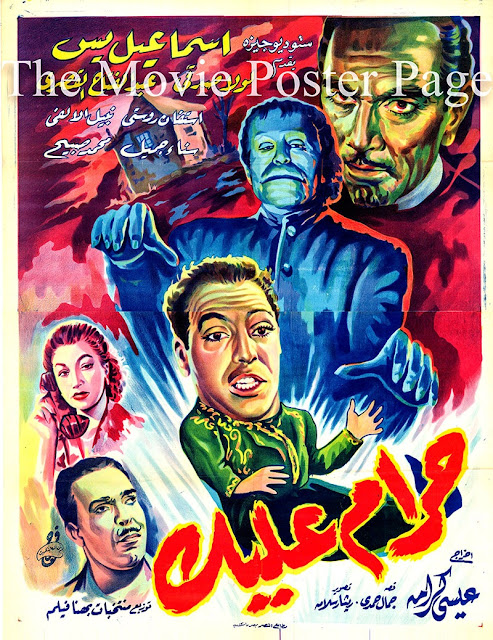 Abbott and Costello Meet Frankenstein was a smash hit, both at home and abroad. Such was its impact that not only did it see an unauthorised 'remake' in Mexico, but also in Egypt of all places! It's a shame the Mummy wasn't in ...Meet Frankenstein, then we could see the Egyptians tackling their no. 1 'movie monster'!

Since I don't properly speak Arabic yet, I watched 1953's Haram Alek with a Jordanian penpal. Despite the fact that by her admission the harder-to-understand Egyptian dialect gives her brain damage, she helped me dutifully in understanding both the basics and specifics of the film. 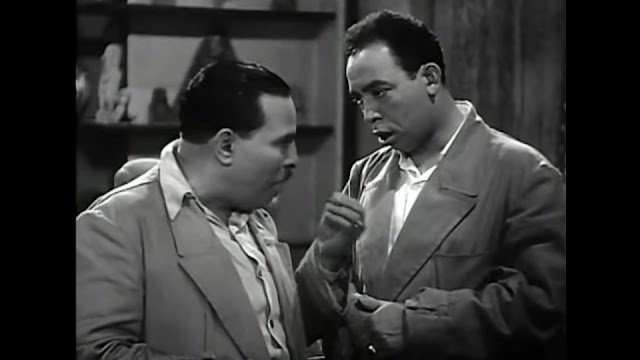 The plot to Haram Alek (An Arabic phrase meaning Have Mercy/Shame On You) is much the same as the previous film, albeit with changed names, and some cultural updates. As far as remakes go, this is good. Enough is the same for it to feel familiar, but enough has been changed to make this stand out more in its own right. The dialogue is thankfully not just the same script translated into Arabic, for the most part. The two leads, Ismail Yasseen and Abdel El Kasri don't try and copy the styles of the two Americans, mainly because these guys were already established actors and comedians. They didn't need to ape anyone else, which is a relief. It makes the film feel less cheap.

Haram Alek is quite a bit more streamlined than its predecessor, with the two leads being workers at the museum that receives the monsters, and the Wolfman being the lab assistant. These are appreciated, and make the film feel less cluttered.

While the Gothic look to the proceedings is absent (since Gothic architecture isn't really an Egyptian staple)  the tone remains unchanged, with some scenes coming across genuinely tense! 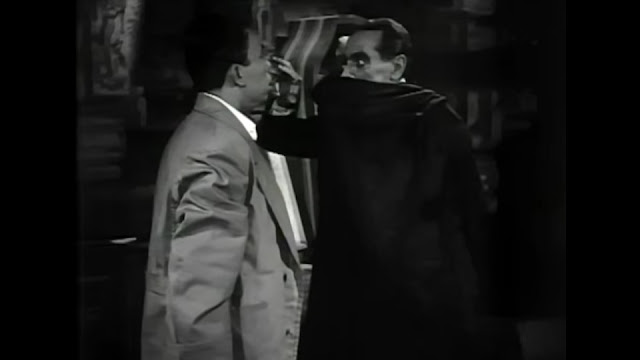 For all the scenes that are shot very closely to the original, some are interestingly different, such as Ismail hanging out washing while unrealizingly being threatened by the Wolfman, as opposed to Costello looking around a hotel room, and the scene where the duo try barricading the monster out only for it to emerge from another door, rather than it being a case of 'pull not push'.

Despite the more streamlined nature, Haram Alek is almost 10 minutes longer than ...Meet Frankenstein. Why is that, you ask? Could it be perhaps this version has a less rushed ending? More fleshed out characters?  Well, all the bellydancing miiight have something to do with it... 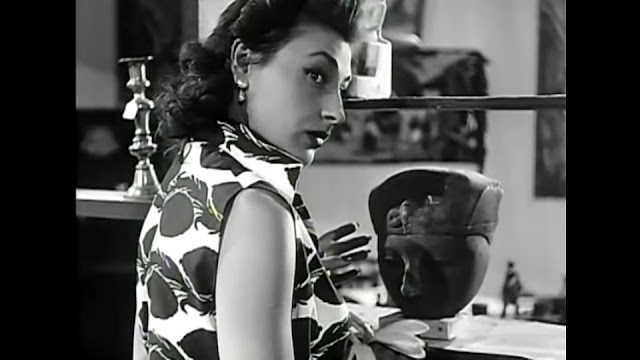 For those who don't have the luxury of speaking Arabic, the amount of characters here can be a bit overwhelming, but it's otherwise not too bad. They're all introduced early enough, and most are easy to tell apart.

The amount of screentime the monsters get is pretty on-par with the original. They're used pretty sparingly, some more than others, but overall appear enough, save for the 'Frankenstein's mummy', who does very little until the end.


While the budget is probably pretty cheap by Hollywood standards, Haram Alek looks quite good, with interesting sets. As for the costumes, they're well-crafted! The story's explanation for the origin of the monsters is that they're Ancient Egyptian, but their true providence is clear from their appearance, and even the movie has a couple of cracks about this. 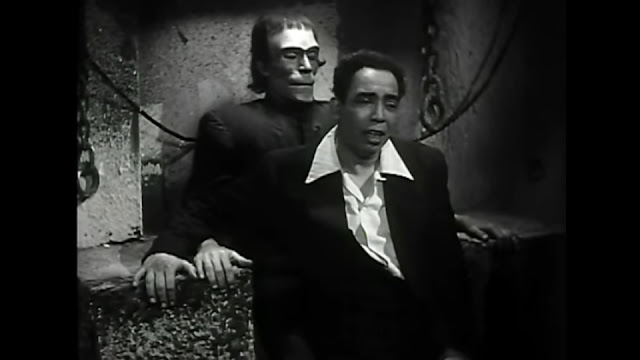 The Frankenstein monster looked hilariously fake to me at first, but once you get over the feeling of seeing an ultra cheap version of a famous movie monster, it actually doesn't look that bad! The lower half is more stylised and plactic-y, but the rest is clearly either make-up, or a very well made mask. While his chest can look a little boxy at times, he still cuts a pretty intimidating figure thanks to his size and visage.

The Wolf Man looks great. The effect itself is just as good as that in ...Meet Frankenstein, though the transition leaves something to be desired, since they just have the screen go black for a second and BAM, he's now a werewolf. 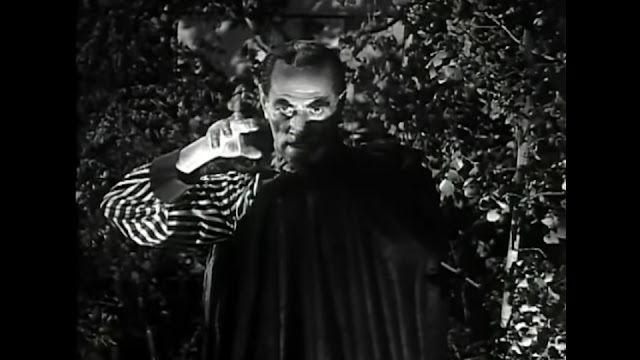 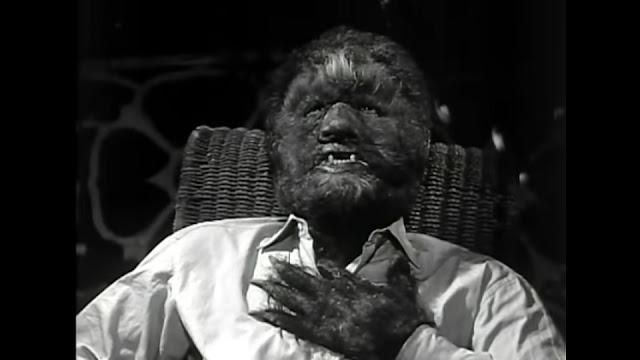 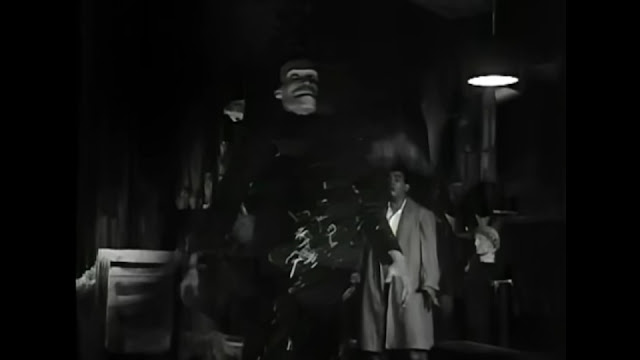 The acting here is pretty good! Ismail Yasseen is a divisive actor. Some might find him annoying, others really talented. As for me, I enjoyed him well enough, even if he could sometimes get a tad grating. One thing's for sure, he's a king of fake laughter! Abdel Fattah El Kasri meanwhile is more of a straight man, usually frustrated by Yassin's antics and yelling at him to stop fooling around. Interestingly, the duo's body shapes are the complete opposite of Abbott and Costello!
Someone makes for a pretty good Dracula, getting some fun over-the-top moments.Sanaa Gameel/Lola Sedki is delightully evil as the scheming girlfriend. Sanaa Gameel/Lola Sedki and someone else do decently as the nice girl and the Wolf Man, respectively.

Out of the two films, I'd say Abbott and Costello Meet Frankenstein is better than Haram Alek (because duh), but just because it had the balls to take on the challenge of remaking a comedy classic doesn't mean Haram Alek fell short. It's still plenty of fun, and most interesting. I probably wouldn't found it more entertaining had I not been figuratively reaching for a dictionary every sentence. I definitely recommend it as an oddity of cinema, and while it's probably not reflective of Egyptian cinema as a whole, I'm sure it'd be a fine introduction, and certainly more of an attention grabber than some arthouse movie!...
Posted by Chris Hewson at 9:12 AM