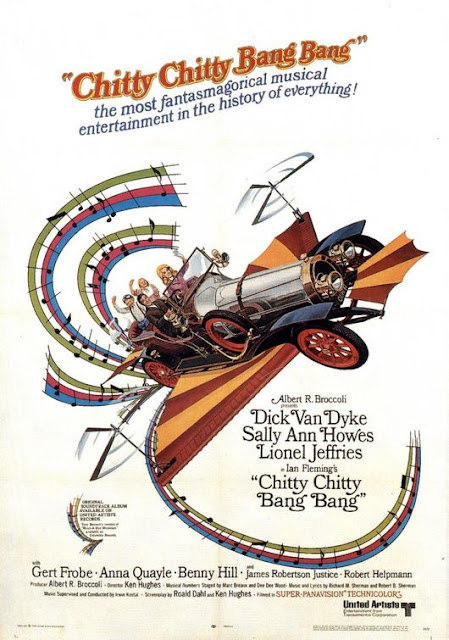 Brilliant, albeit sometimes ineffective inventor Caractacus Potts lives in the English countryside with his two children Jeremy and Jemima, and his imaginative and somewhat loony grandfather. Together they have all sorts of adventures, from a catastrophic first meeting with the wealthy and concerned Truly Scrumptious, to attempting to sell a new kind of whistling candy, and saving up the money to restore a beautiful old racing car, which the family names Chitty Chitty Bang Bang. While on a picnic with Truly, Caractacus tells everyone a fantastical adventure, of how the evil Baron Bomburst tried to steal Chitty for himself, so the family has to travel to the far away land of Vulgaria to stop him... 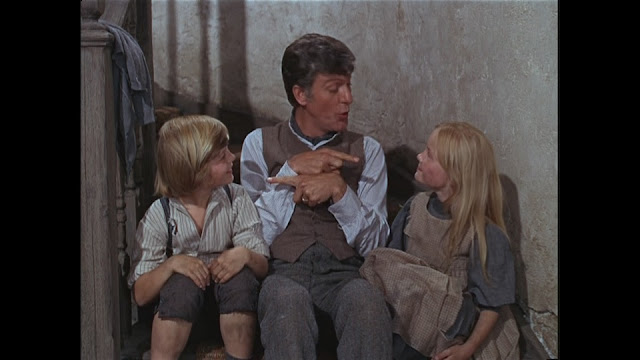 Based somewhat tenuously on the pretty good book by Ian Fleming and brought to the screen by his friend and noted screenwriter Roald Dahl, Chitty Chitty Bang Bang is renowned as one of the quintessential children's fantasy films. Having first seen it as a child myself, I've always found it to be a wonderful picture. It has a larger-than-life feel to it, never gets dull, and is full of imagination, even if it can get weird at times.

The biggest problem I have with Chitty Chitty Bang Bang is its confused story. It feels almost like two movies in one! We follow a pretty normal slice-of-life tale about a 1920s-ish family, and then at the hour mark it abruptly morphs into a garish fantasy! When I was a kid I thought it was just plain abrupt (I was pissed by the ending 'fake-out', lemme tell ya!), but on reflection it does seem a little clearer that what we're seeing is just Caractacus telling a make-believe story. It still comes completely out of left field though 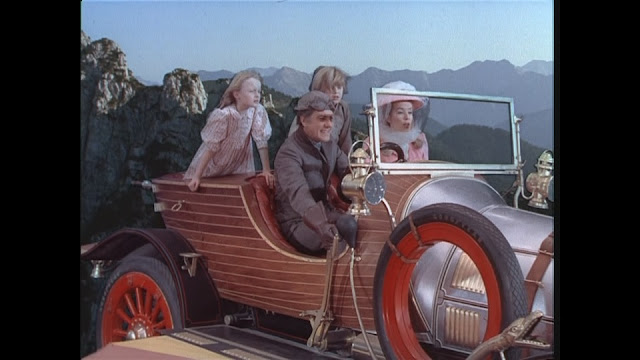 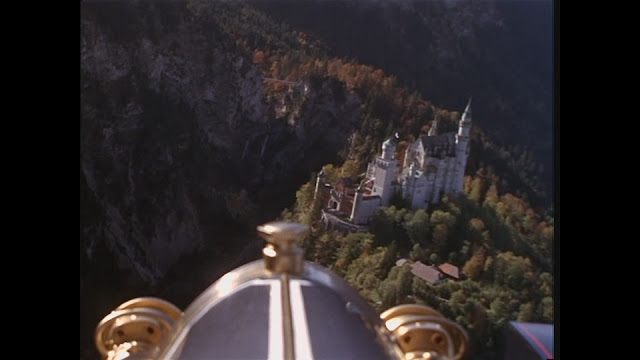 One of the weirder things about the fantasy is how everyone's character arcs continue, meaning that not only was all of that merely fictional, but Caractacus was including the growing romance between him and Truly, which is...weird. Either that or it was the kids including that part of the story...which is still weird, and precocious to boot.

If I were to suggest potential fixes to the pacing issues present here, I suppose the Toot Sweet storyline could've been cut, so it doesn't take as long to reach the fantasy section. On the other hand though, one might lasso suggest that the fantasy section be excised, letting the movie be a normal 1920s family picture for the entire duration.

Moving beyond this problem, the story is well told. The first half is more down-to-earth, and has some amusing scenes, and quieter moments. The fantasy half is more over-the-top and whimsical, and while not all of the jokes landed for me 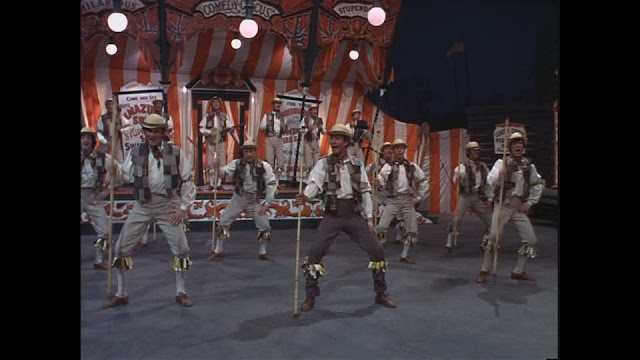 The musical numbers in Chitty Chitty Bang Bang are superb. They're bouncy, light, and sound great. My favourite tracks were Me Ol' Bamboo, You Two, Posh, and others. I like them all, even the somewhat superfluous ones. Some of the songs repeat, often effectively, such as the reprisals of Hushabye Mountain, and Truly Scrumptious. While the latter is only partial, it still harmonises really well with the immediate reprise of the short Doll on a Music Box, and is a great character moment. What doesn't work as well is the titular song. Good...lord! It gets several mini reprisals, and that's not to mention the instrumental recitations throughout. It gets a bit tiring after a while! Still a fabulously jaunty piece though! You'll be humming it for days, nay, years!

The characters all feel well-realised, and we enjoy going on an adventure with them. My only complain is that Jeremy and Jemima, Grandpa, and even Chitty herself are basically pretty much absent from the final half hour. 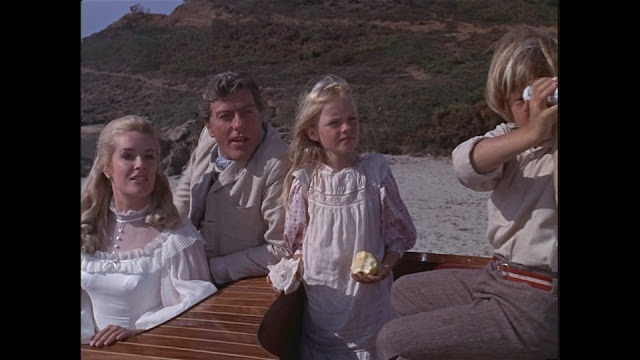 The acting is fun all round. Dick van Dyke's American accent in comparison with his English father and children is juuust a little distracting at first, but you forget it quickly enough as you settle back and enjoy his energetic peformance, and we can all be thankful he didn't attempt a British accent again. Lionel Jeffries is great as Grandfather Aidrian Hall and Heather Ripley are fine as far as child catchers* go, and Sally Ann-Howes is nice. Gert Fröbe is a great villain, as bombastic as his name implies, while British 'German' Anna Quayle is such a cute button that you almost forget she's playing a psycho creep who locks children up. Benny Hill delivers a surprisingly un-comedic performance, doing well, while Robert Helpmann is absolutely terrifying as the Child Catcher. Other performances range from either annoying to fun. There's certainly no shortage of actors on display in this 2 and a half hour behemoth of a film!

*That was a typo. I meant actors! But c'mon, that is too good not to keep! Some typos are gold! 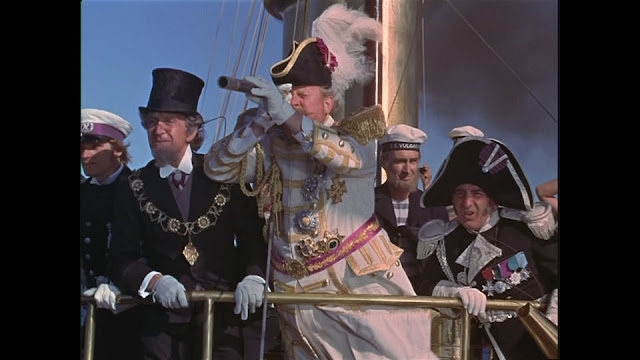 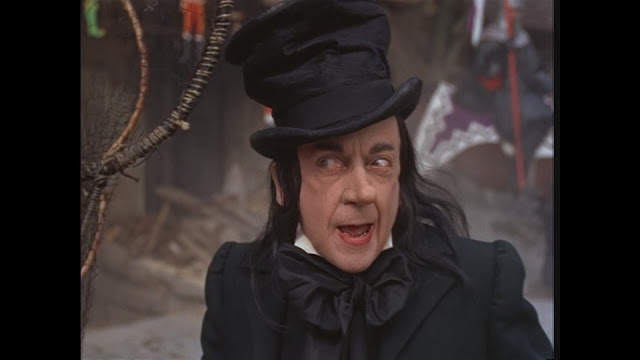 Chitty Chitty Bang Bang looks absolutely spectacular. The car itself is well designed in all of its forms, and while there's clear green screen work during the flying scenes, it's not too bad. The movie is filmed on location in England and in Bavaria, which still looks like a living breathing fairytale land, aiding the production perfectly. The marrionette dance scene apparently did require strings, although I didn't notice any when casually watching. Lastly, the Posh number looks stunningly filmed! Either they had an aquarium set done up to look exactly like the open ocean, or they really did dip Lionel Jeffries in an out of the real thing while he sang! 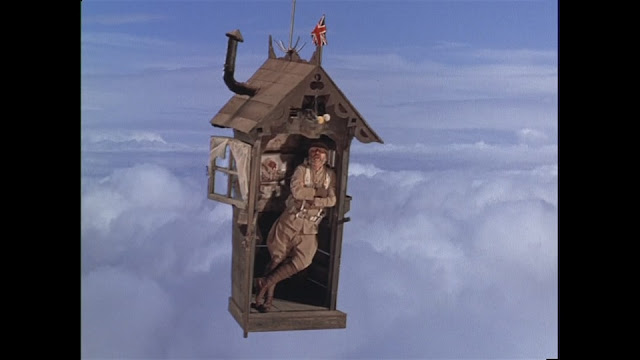 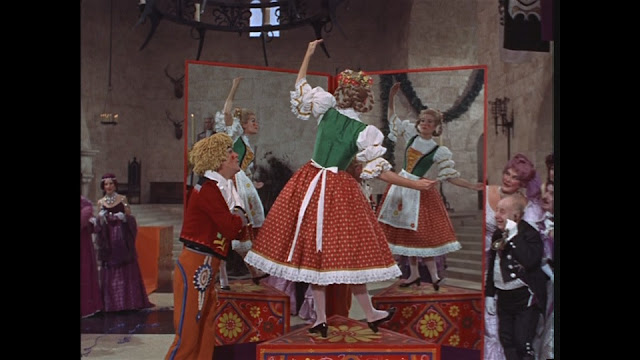 While it has some pacing issues due to its schizophrenic story, Chitty Chitty Bang Bang moves along briskly enough, and is an  absolute treat for kids of all ages. I highly recommend it!...
Posted by Chris Hewson at 9:30 PM