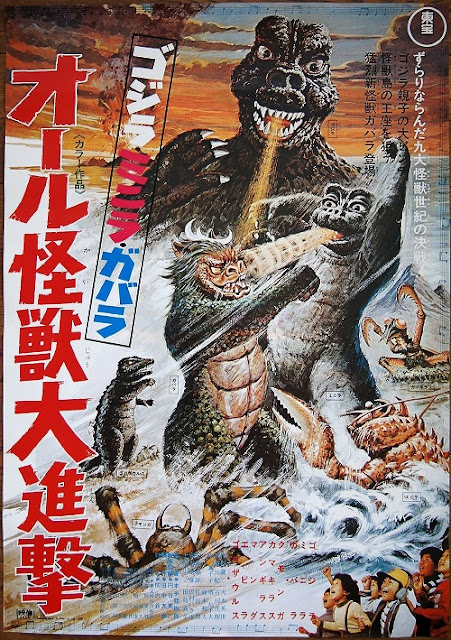 Ichiro is a bored youngster living a day to day life, drudging back and forth from school, trying to avoid bullies, and holding a fascination for all things Godzilla. One day he begins fantasizing about being on Monster Island with Godzilla's son, and this night end up being the very thing that saves him when he is taken hostage by two nefarious criminals... 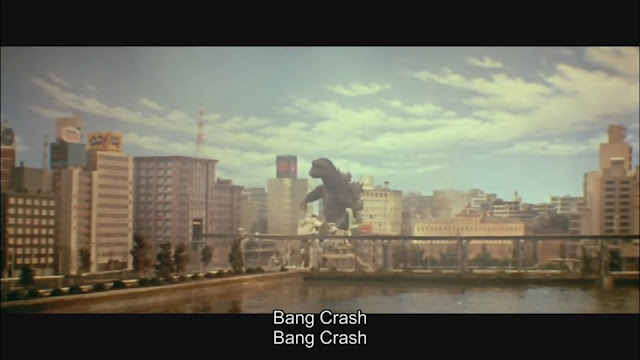 All Monsters Attack is considered by many to be the Godzilla series' ultimate low point. It panders the most to children, it's half made up of stock footage, and features an annoying kid. Those are the general complaints. As for how true they are, mostly, in a sense, but it really depends on context, or your preference. I do agree that it's perhaps the least good Godzilla film, but American films notwithstanding I don't think I could call any entry in this series truly bad. 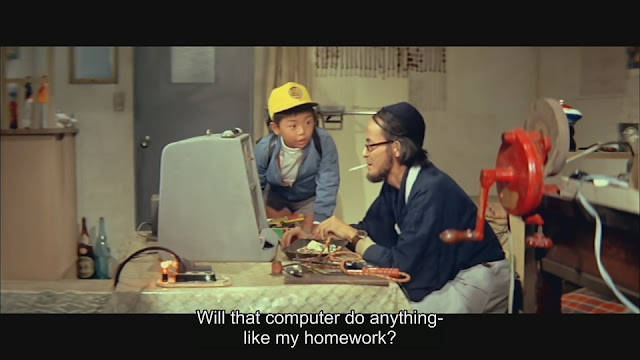 This is most definitely a kids film. There's none of the darkness of the original, of course, but that had been absent for a while. But the story is the most simple and down-to-earth we'd gotten in a while, focusing not on aliens invading Earth, or Godzilla fighting King Kong, but on a normal Japanese boy's adventures. He doesn't even live in Godzilla's world, but the real world, making this perhaps the only entry in the series to truly be out of canon (unless you wanna think Godzilla is real here, and Japanese children adore real monsters). This story is definitely out of the norm, but I feel it's handled well, and I like that it's directed at kids who are kaiju fans. They are sure to see themselves in Ichiro.
The story is decent enough, with the fleeing bank robbers giving a bit of stakes to the human plot. The daydreaming cutaways to Monster Island are spread out evenly enough, and the movie has pretty good pacing. 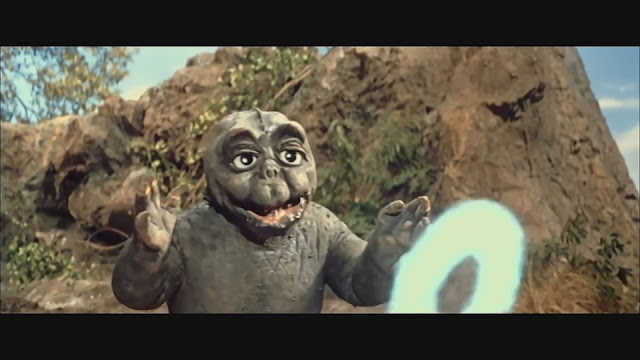 The film's messages are a little off-key though. The first big message is to stand up for yourself when bullied instead of running away. Some people might disagree with this message of beating the stuffing out of your bullies, or at least its portrayal here, but I think it's generally handled well, and I do think bullies deserve a good trouncing every now and then. Whether it's a good idea for the film to advocate children fighting armed gangsters though is another. On one hand, the 'real world' setting makes it come off as insane advice, but on the other hand, it is just a movie, so again it depends on how you see it. 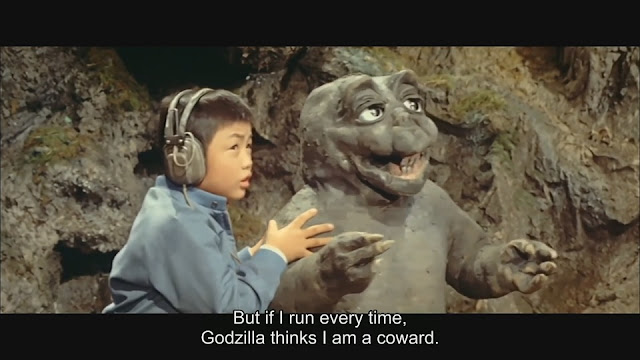 What isn't up for debate though is how bullshit the ending itself is. After foiling the baddies, Ichiro once again encounters his bullies, then promptly kicks the crap out of them...and promptly joins them, pranking an innocent painter into falling off a ladder. What a little shit! Is this what you're doing with Godzilla's influence?!
All Monsters Attack is directed by Ishiro Honda, which may come as a surprise to many, who might see it as the director really slumming it, when he's the man responsible for the masterpiece that was the original Godzilla. But surprisingly Honda actually had great affection for this film, even considering it one of his favourites of the series. While that sounds crazy at first, I can actually see where he's coming from, as it contains such a sense of childhood innocence that I appreciate. Whether or not it does these well is up for debate of course, but that kind of sweet intent makes me understand why he would hold it in such high esteem, especially in his older years. 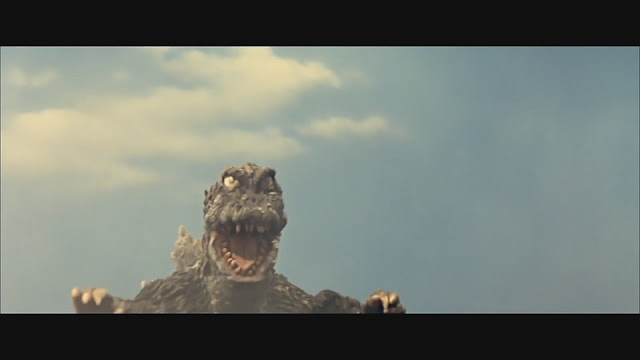 The monster action here is pretty good, even though there's not a lot. Godzilla's role as single parent continues, as he pushes his son to not be a coward and to face up to his issues. The things all monsters go through. It's Minilla who gets the bulk of the action, during his encounters with the villainous Gabara. He gets his ass kicked most of the time, but perseveres and finally knocks that electric sucker out! Then he and his dad tag-team the monster while he's down. Ahhh, bonding.
Gabara is a pretty neat new kaiju, with a colourful design and bullyish nature.     Perhaps the strangest thing about All Monsters Attack besides its overall premise is the fact that Minilla can talk! Like a human! It doesn't feel too out of place thankfully, with such a cute kid-friendly character, and it's not like Godzilla or Gabara talk either. Otherwise things would start getting a bit too over-the-top!
The film uses stock footage from Ebirah, Horror of the Deep and Son of Godzilla. This is the laziest use of stock footage the series would ever do, but only because it's not trying to hide it. Instead it comes off like a highlight reel in a way, as if Ichiro was watching past fights he's seen in the movies. Because of this, All Monsters Attack doesn't feel anywhere near as shameless as it could have. 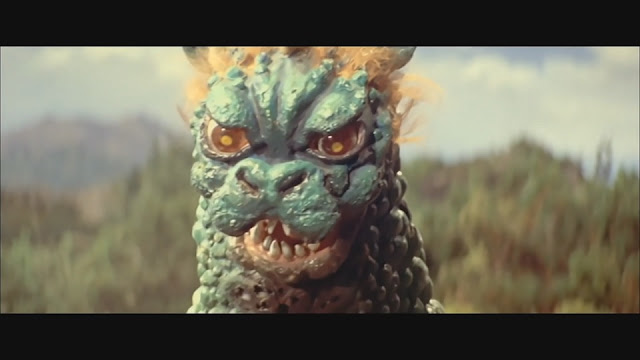 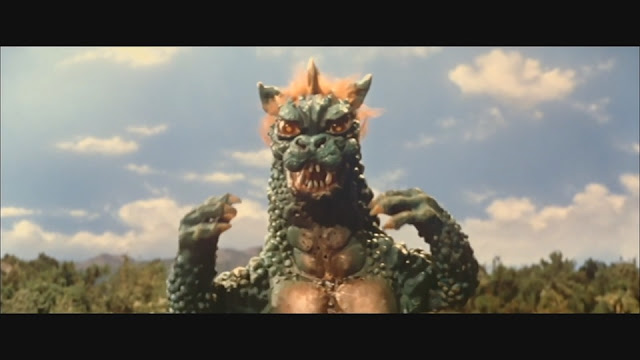 The score is classic 60s Godzilla goodness. Some of it is recycled, but that's not too big a deal. There's a difference between a recurring track or two throughout a series, and just using the same song again and again. The main original tune is the song that opens the movie, and its weird! The lyrics are like a kid screaming "Bang crash, destroy, Godzilla, hahaha!", and the singer sounds like a gravelly voiced woman pretending to be a child. It's one part bizarre and screechy, and another part oddly enjoyable in a way. 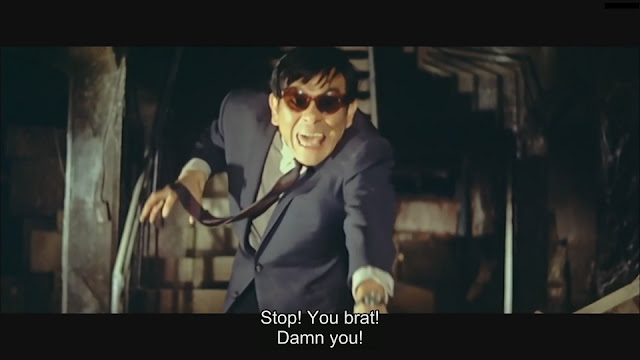 The acting here is fine. Tomonori Yazaki is a decent enough kid for the most part, although some moments leave a little to be desired. The rest of the human cast do well. Haruo Nakajima is a great Godzilla as usual, while Marchan the Dwarf once again portrayed Minilla.
The English dub however is somewhat notorious! From making Ichiro ten thousand times more annoying, to giving Minilla a bizarre old man voice, and having a few classic moments that live on in infamy to this day, 'Godzilla's Revenge' is hardly the definitive version of this movie to seek out, as it only magnifies the movie's existing problems, but it's certainly worth a watch just for the sheer laugh-value. 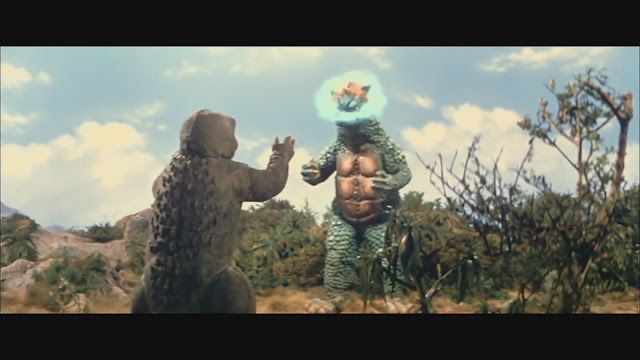 Overall, All Monsters Attack is hardly the Godzilla series's greatest moment, but I've always thought it better than others have, and it certainly has plenty to enjoy. At its worst, it's just a basic hour long monster movie, and that's a hard thing to hate...
Posted by Chris at 7:42 AM