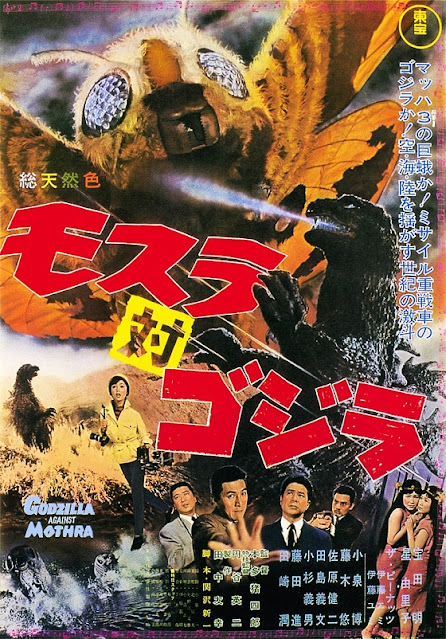 After a tremendous storm, a mysterious egg washes up on the local beach. The townspeople promptly sell it when the unscrupulous Happy Fun corporation come knocking, much to the frustration of a scientist, who teams up with some journalists to do a little digging. On their travels they meet the Fairy Twins of Infant Island, who implore them to retrieve their sacred egg before it hatches. Their initial plans fail, and soon a new threat looms when Godzilla awakes. It seems only the twins' spirit guardian Mothra can help, but will she save those who stole her egg?... 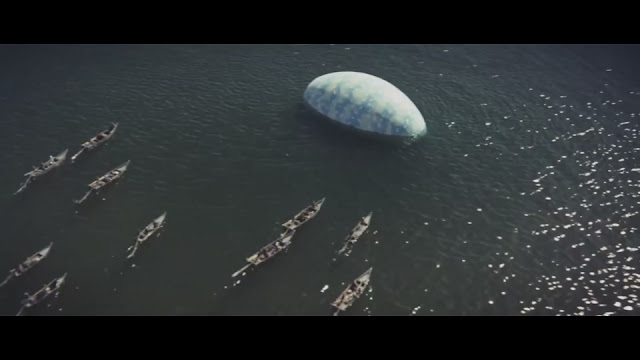 Mothra vs. Godzilla, not to be confused with later entry Godzilla vs. Mothra, is his first encounter with the fluttery female kaiju. And what a classic encounter it is! Almost 60 years later this still holds up brilliantly. A brisk yet eventful movie, that never slows down.
The story is a fairly simple one, but told strongly. We completely understand the positions of each party, from the desperate Infant Islanders to the conniving corporation, and the helpless humans/reporters.

Beyond the base story, there's plenty of satire and commentary here about the evils of big business, all delivered in a way that's effective, fun, and not too preachy. There's also a good message about humanity's capacity for working together for the common good, even when we don't get along. 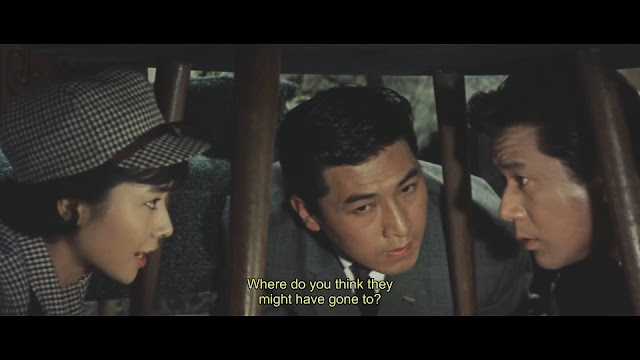 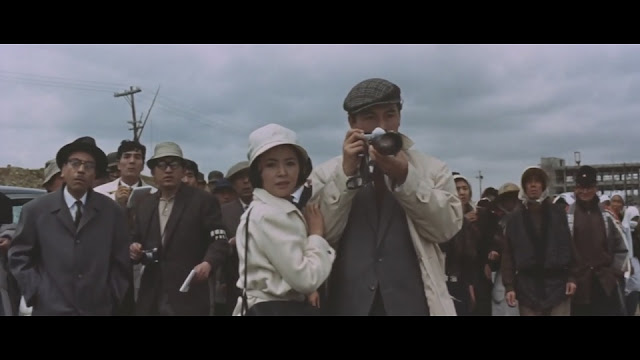 The movie's human leads are a pair of plucky newspaper staff and their scientist buddy. The trio have a nice dynamic, though the two men often blended together, and the = banter between reporter Ichiro and his photographer Junko is often sidelined or completely forgotten. Understandably I suppose, since one tends to forget their little feuds when giant moths hire them to find their eggs.
I felt they were underused by the last act though. The movie seemed like it was setting them up for something big, with their editor reminding them of the power of the press. They shouldn't give up hope of stopping the Happy Fun group, because the pen is STRONG...Then nothing really happens. The two evil businessmen just get randomly stomped on by Godzilla after their own scuffle and that's all solved. I would've preferred the heroes to have done something proactive in stopping them. Perhaps they could've somehow exposed the group's illicit dealings, and that's why the billionaire almost seems on the run in his last scene. 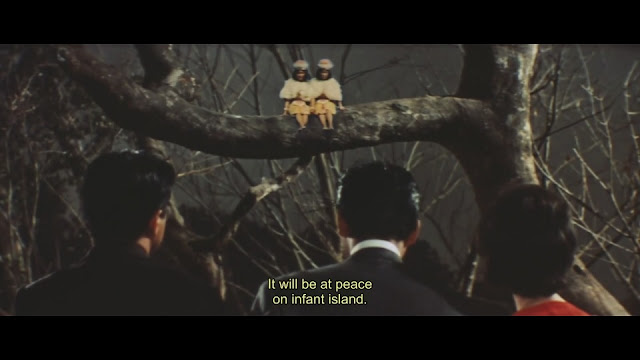 The Fairy Twins are a breath of fresh air. Usually supernatural messengers are ominous or threatening, but even when they're delivering warnings, or declining requests for help, they do so with such politeness. They even ask the villains to kindly return the egg! I also found how people react to them hilarious, especially when one of the heroes responded to their story with "I believe them" after they said the egg was theirs. He doesn't bat an eyelid at meeting these tiny women, and only believes them because their story is convincing, not because they're magical fairies. Junko also says "Let's hear their story first", as if to imply the fairies could be liars.
The bad guys have a great role here. While we don't get as much of them as I'd have liked, there's enough. The standout is the portly Kumayama, who's always got an excuse for everything (including for why he hasn't paid you yet), comes up with amusing ways of pricing giant mystery eggs, and would sell his own mother if he could. 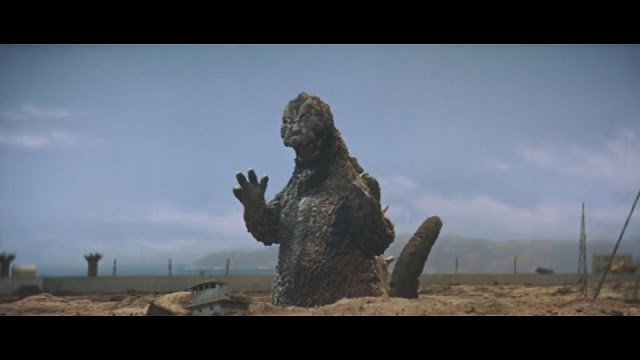 The monsters here are handled in a mixed way. Whenever they're onscreen, it's wonderful! But that's the problem. It takes Godzilla over half an hour to appear! Before that point, he's literally never even mentioned, and you could be forgiven for thinking you were watching a Mothra solo adventure. She fares a little better. Her introduction is surprisingly early and random, but nice all the same.
Godzilla is his usual angry self, going on a rampage, and expressing his distaste for Japanese architecture, old and new. This was the last entry for a while where he was exclusively the bad guy, but even here he's more of a pissed off force of nature. He causes destruction, but more because it's in his way, and he hasn't had his morning coffee yet. He even kills the human villains, so thanks Godzilla! 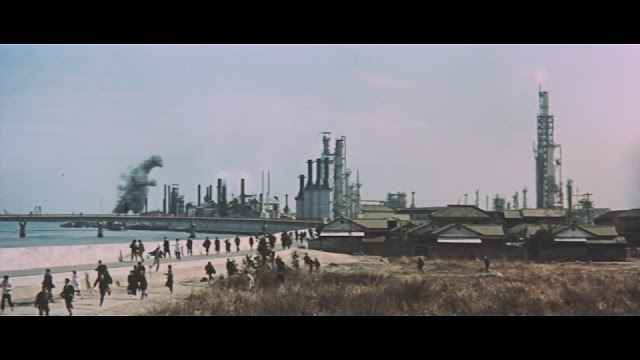 Mothra is a perfect counterpoint to Godzilla. Feminine, gentle, and always willing to help humanity in a pinch, even if she might knock over a building or two along the way. The whole mythology around her and the Infant Islanders is great, and they are portrayed as a very interesting culture.
The overall direction here is stellar. Ishiro Honda does a wonderful job at framing even smaller scenes, and the larger scale ones are a marvel. Locations are very believable, with the crew either making a fleet of tiny boats, or actually crafting a giant egg prop and sticking in the ocean, presumably hoping the thing would float! Infant Island is portrayed in an almost harrowing manner, showing off perfectly the scale of devastation nuclear testing can bring. The monsters look great with their surroundings, and there's never an unbelievable moment. The rampages and monster fights are shot really well. 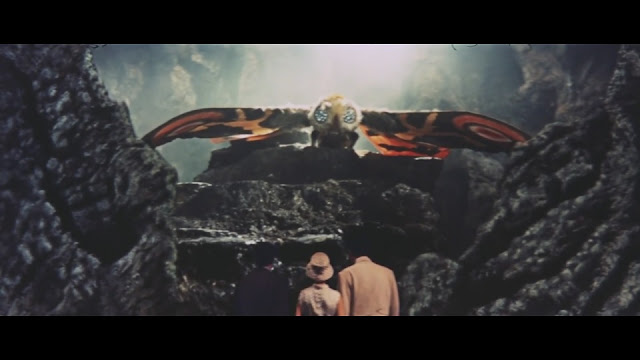 Godzilla is designed well as always, and his tail has an interesting degree of animation this time round, almost wriggling like a snake. Mothra meanwhile is a technological wonder, flying and moving very convincingly, even in combat! Shes' also very pretty, too!
The acting here is all nice, with good leads, villains, and an inspired turn by twin singers Emi and Yumi Ito (aka The Peanuts). Something I miss about older movies is that not everything had to star a celebrity. Japanese movies would often just star regular actors. Popular, yeah, but many films nowadays feel the need to cram in a big name  just for the sake of it, leading to  In movies like this though, they feel more like real people.
Akira Ifukube delivers yet another wonderful score. The recurring tracks still hold up brilliantly, creating a perfect atmosphere as the monsters rampage. They make things feel so epic and dramatic. Then on the other side of the spectrum we have some fairy tale-esque tracks, that five those moments a serene almost fantasy feel. The songs the Fairy Twins sing are wonderful too. 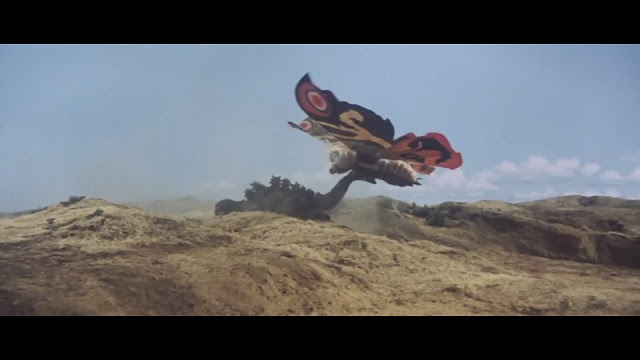 Considered by many to be one of the series's best moments, Mothra vs. Godzilla is a great time. It's a nice introduction to the series, and would lay the groundwork for a lot to come in the future...
Posted by Chris at 8:22 AM