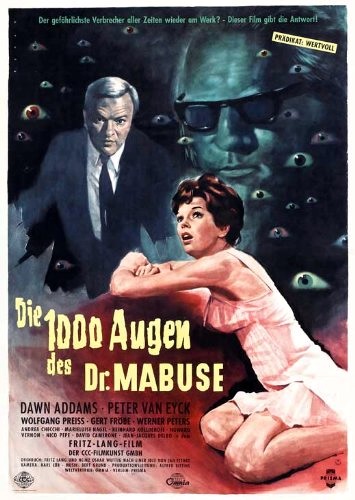 Doctor Mabuse began life in a novel by Luxembourgish author Norbert Jacques, created hand-in-hand with the lauded silent adaption by Fritz Lang. More than a decade followed before its first sequel, a gripping commentary on the rise of the nazis, and 30 more years would follow before the final film in the trilogy would be made-The Thousand Eyes of Dr. Mabuse... 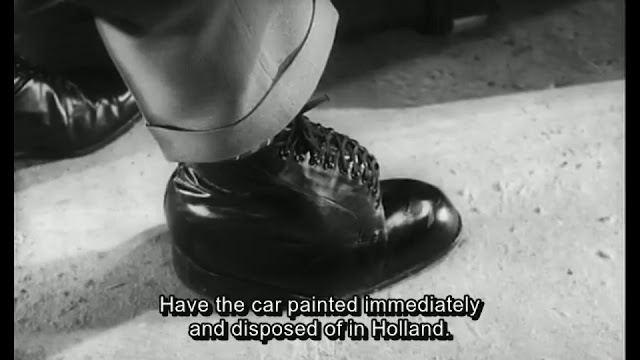 The Lux Hotel is a ritzy establishment, but one that has attracted the attention of the authorities due to a high number of suicides, all rich clients. Not only are the police investigating, with the help of blind psychic Cornelius, but a visiting businessman finds himself embroiled in the plight of a distraught young lady. Soon all parties converge, unwittingly the pawns of a man thought dead long ago-Dr. Mabuse... 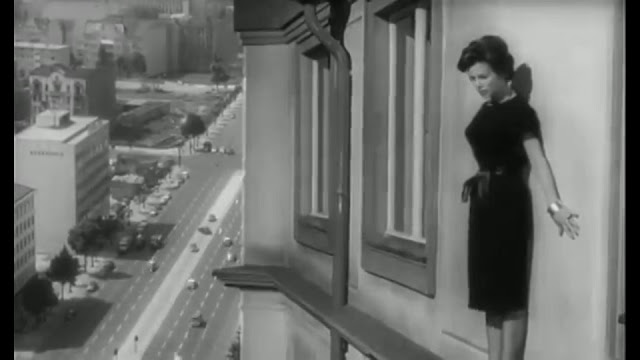 The Thousand Eyes of Dr. Mabuse marks the return of a long dormant franchise, with its original director still at the helm, for his final movie! While the decade long gaps between movies is ridiculous, they do serve to help the series in one major way. The first Mabuse entry came during the Weimar period in Germany's history, Testament came out during the height of the nazi's power, and now we have The Thousand Eyes, which comes during Communist held Berlin, when personal freedoms were low, and it seemed like every movement in the city was monitored by the state. 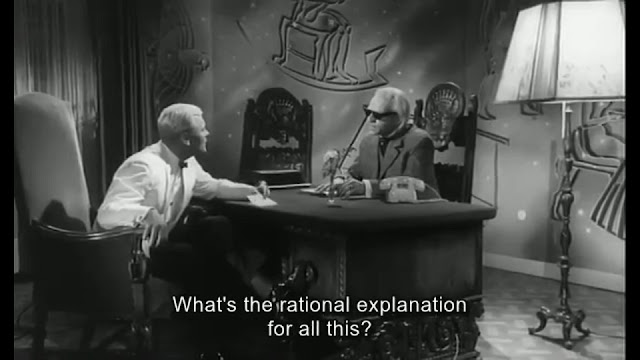 How the movie handles these messages is more metaphorical than literal, since it's a hotel doing the surveilling, and the authorities here are actually good guys. But while it doesn't necessarily provide as much rich or deep social commentary as it could've, it's still an interesting scenario.
What is a big drawback though is how the character Mabuse is handled. The movie barely even mentions him, really. It does a couple of times to build up anticipation, but then it just turns out at the last minute that the villain is just some random dude who read his notes. It'd be like watching a Dracula movie that builds him up constantly, but he he never actually appears, then the villain was just some random asshole all along. 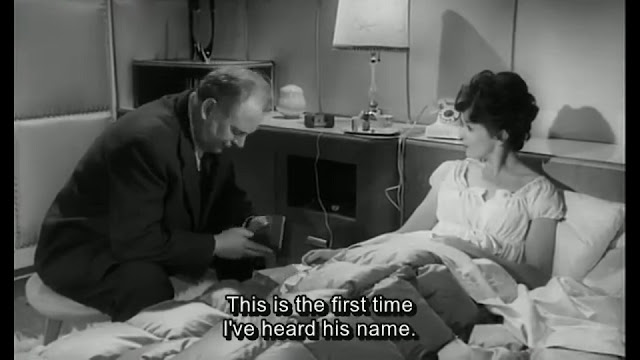 The identity of the film's mysterious villain is a secret. He's in disguise, and could be any of these suspects. Could it be the hotel doctor? The insurance man? The millionaire? Or the creepy blind man who foresees every calamity that happens in the movie? It's obvious as punch that Cornelius is Dr. Mabuse. From his convenient predicting of every event, to his little observations, and the general fact that he looks terrifying, it makes for a pretty obvious mystery. So much so I thought he had to be a red herring, but nope. 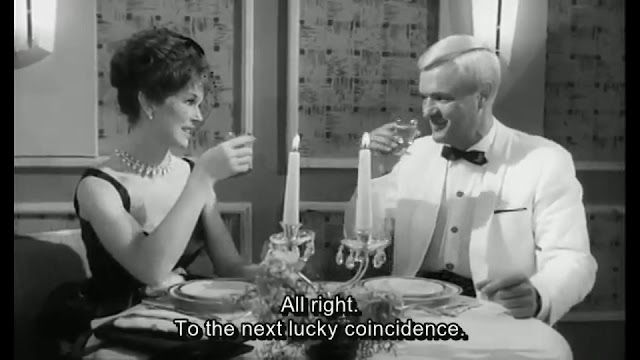 The story is a pretty good one, with a few twists and turns. Where it falters is in feeling like just another krimi film. Which would be perfectly fine if this was just another krimi film, but when it's a Mabuse entry directed by impressionist whizz Fritz Lang himself, you expect something more.
I also feel that it being a sequel impedes it in a way, as you spend the whole film wondering how the super dead Dr. Mabuse is going to be involved, 30 years later. The answer we finally got was disappointing to me, feeling very arbitrary, and it seemed like this villain had precious little to do with Mabuse at all. Compare that with Testament, where the Doctor dies early on, and the bad guy turns out to also be some guy who read his notes. But there it works, because we know the character, he has a big presence throughout, and said notes are important (and also destroyed at the end, so I'm not sure how this guy got ahold of 'em!). 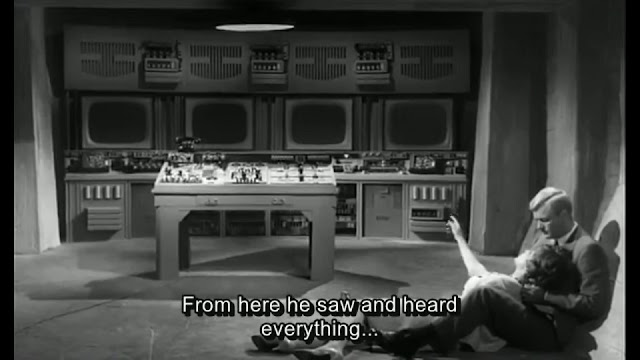 We don't get as much of a criminal network here. Besides the first murder, we see exactly no crimes committed, and a gang comprised of only two hoods, one of whom is killed pretty quickly. It's good to not reiterate what we'd already seen in Testament, but it's still good to show us the workings of his organisation. It's an effective tool, as well as a staple in previous films.
A related observation, Mabuse's organisation seems a lot more leaky this time. Perhaps that was an intentional decision. There was already one in the past, then it happens again at the beginning. Then another henchman bites the dust. Another running theme/link with all these people is that they had all served their purpose and were now considered expendable. 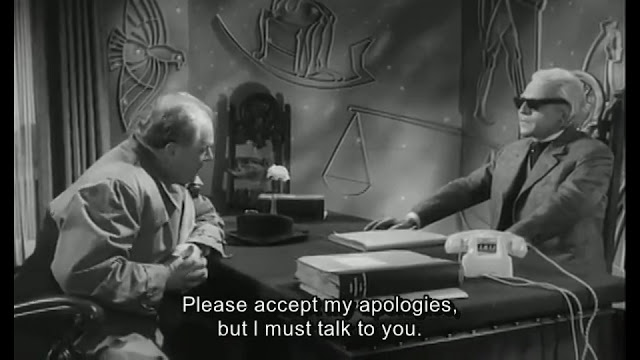 Getting back to the positives, there are many memorable moments here. One of the film's big setpieces is a psychic reading halfway though. It's a great scene, and while I feel it undermines the big reveal when Mabuse's name is casually mentioned 10 minutes in, it doesn't dampen what a great moment it is. I also really enjoyed the climax! There's a lot of great action and suspense, and the reveal that sets everything off is great. It's a moment you can see coming once all the pieces sort into place, and you sit forward and grin, like "Ohhh, I know what's gonna happen! Bring it on!"
The setting is also utilised very well. The majority of the movie is set there, and it never overstays its welcome. I feel as far as plans go it has pretty limited appeal, since the police have figured out already that something shady's going on. But for a little while at least it's a great scheme. 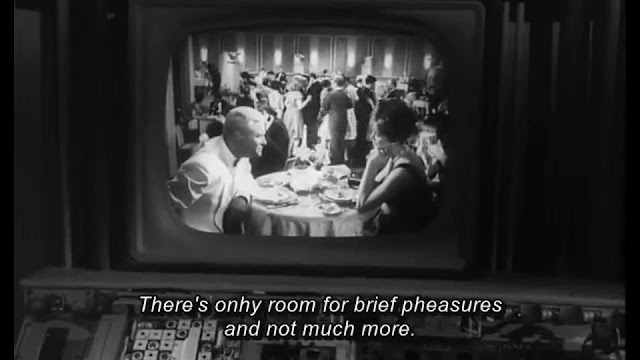 The visiting businessman is a good guy, and has some nice heroic moments. You're a bit unsure at first if he is who he says he is, but we soon find he's the real deal. His romance with mysterious Marion is well written, and keeps you guessing.
Inspector Kras is the most proactive lead in the film, directly investigating things from the get-go. Unsuspicious, noble, and grumpy, he sacrifices a long-awaited holiday to stay and fight this threat, despite many attempts on his life. He ends up being
Perhaps the films best character is insurance agent Hieronymus B. Mistelzweig. I really enjoyed him. As a kooky and somewhat girthy insurance man, he's against type for the role he ends up filling, and I felt he was one of the movie's most heroic characters. That's probably spoiling that he's not Dr. Mabuse, but hey, don't worry, there are still like three other suspects to keep tabs on. 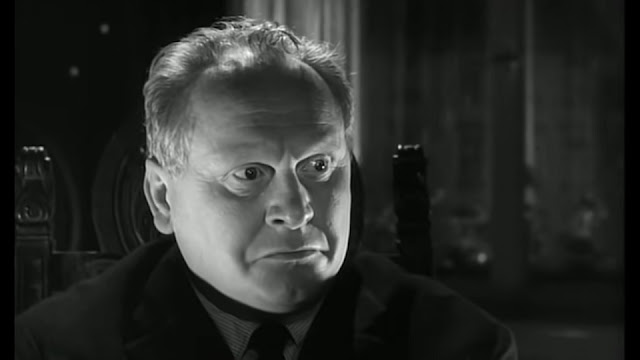 Like any good mystery, there are plenty of red herrings here, and quirky elements. Although why a dog would growl and bark with friends, but be quiet with strangers is anyone's guess. Maybe Lang just wanted to shake up the expected norms? He was also being a cheeky bastard, because one of the red herrings here doesn't actually make any sense!
The cast all do good jobs. Gert Fröbe is a barrel of fun as the gruff Inspector Kras, as is Werner Peters, while the actor playing Cornelius looks like a scary German version of William Hartnell. Wolfgang Preiss has a neat role, if a bit small in places. Peter van Eyck looks like Lex Barker and Howard Vernon got combined in a teleporter. He does well as the good looking hero, as does Dawn Addams as the love interest and possible femme fatale. Speaking of, Vernon himself has a decent role as a henchman! Overall, no disappointments here. 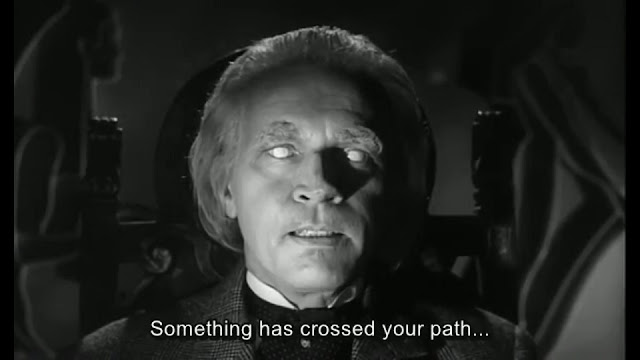 The Thousand Eyes of Dr. Mabuse isn't really a patch on the previous two films as far as I'm concerned, and even in its own right it drags a little, but it's not a bad film, nor one worth avoiding. It's also a decent enough swansong for Fritz Lang...
Posted by Chris at 7:49 AM