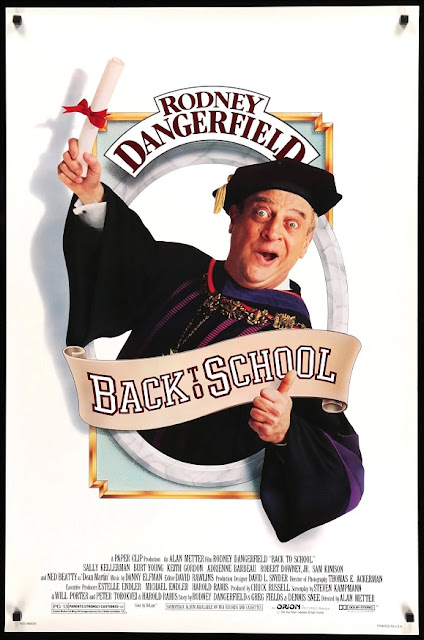 Rodney Dangerfield is still fondly remembered as one of America's greatest comic talents, from his successful stand-up circuits, to his numerous film appearances, including his star-making turn in Caddyshack. Out of all of his solo features though, the most known and well-loved has got to be 1986's Back to School... 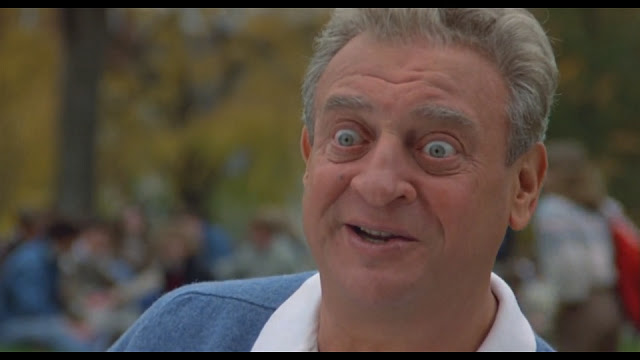 Thornton Melon is a successful older man, who dropped out of high school to start a clothes business and has never looked back. Now a millionaire, he can buy anything he wants, but is interested more in the little things, and in having fun. Eager to see how his son Jason is doing in college, he's dismayed to see he's thinking about dropping out. Determined to see his son not repeat his own past, Thornton re-enrolls,    college along with him...
Back to School is your quintessential 80s college comedy. Simple, engaging, and has got a great lead, with some good stakes. The driving concept is an amusing one, and always handled well. Even though the idea of an older man attending college is commonplace nowadays, the movie's presentation never feels old or dated, but is still just as fresh and original as it was back in the day. 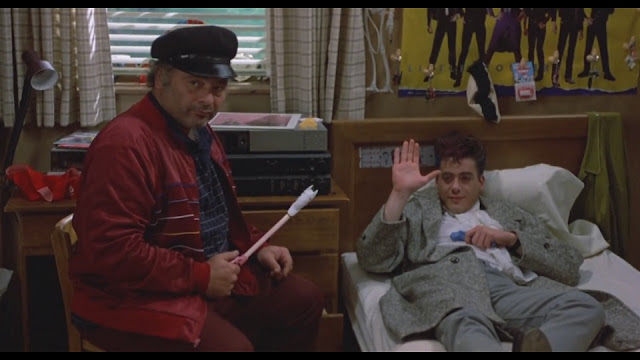 The comedy always lands, with lots of witty dialogue and one-liners, and many funny scenes, like when successful business owner Thornton gives his economics class some unorthodox tips, only to be chastised by the teacher for 'not being realistic'.
Thornton is a great lead, with lots of spirit and humour, but also irresponsible and lazy in some ways, making him flawed enough to not be superhuman, and to need to do some hard work himself to make it through to the movie's end. Something I liked about his character is how he throws about his money. It's not in a = sense, but more that he genuinely doesn't need it. He comes across as an incredibly thrifty guy who just so happens to have millions of dollars, so he doesn't mind tipping a waiter $100 bucks, or giving fancy pens to his classmates, as long as it's helping someone. His whole philosophy is nice too. Despite not having a finished education, he still holds his father's ideals on the subject in high esteem, and intends to make sure his son lives up to them. 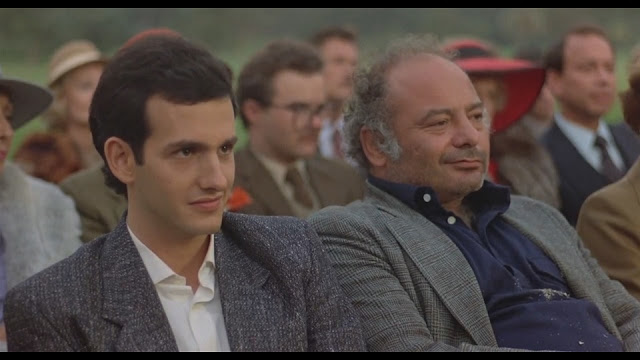 His son Jason is the polar opposite, and while he can have his whiney moments, and whether or not you side with him in these moments is up for debate, but he is always a good supporting lead. His friend Derek is a total weirdo in the best way, while Thornton's chauffeur Lou is a great foil, always a fun presence, low-key but distinct.
English professor Diane and student Valerie are both sweet ladies. As love interests though they can be real pains! Diane spends a good chunk of the movie dating the crotchety Business dean, clearly one inch away from ditching him, and always having the hots for Thornton, but still carries her man around. Then when she takes her boyfriend to one of Thornton's party's, she sees him in a hot-tub with some scantily clad ladies, and has the nerve to be offended! Are you forgetting you came here with your boyfriend, honey? I don't think you have any call judging Thornton! Jason's beau Valerie is similar, spending over half of the movie technically dating his meathead rival, despite knowing from their first scene that he's a dickhead, and liking Jason the whole time. 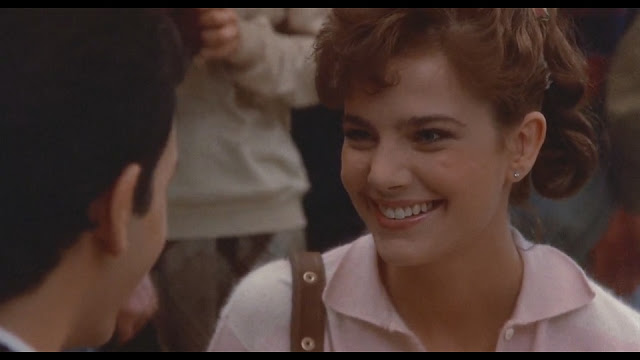 The villains are a suitably dastardly bunch. You've got the asshole jock, who ticks all the expected boxes, and is a love to hate him type baddie. The professor meanwhile is your typical crusty effete dean, who can't stand anything that isn't strictly by the book.
The cast assembled for Back to School is great. Dangerfield is a naturally charismatic lead, always making you smile, while the more down-to-earth Keith Gordon makes for a good counterbalance. Sally Kellerman is a nice addition, and an adorably young Terry Farrell is lovely! Robert Downey Jr. has a funny supporting role, really getting some crazy material to chew on. 'Angry' comedian Sam Kinion has a small but hilariously memorable part. Then you've got actors like Billy Zabka, Burt Young, Ned Beatty, etc, all bringing their usual archetypical performances to the table. There are also a few unexpected cameos to enjoy. 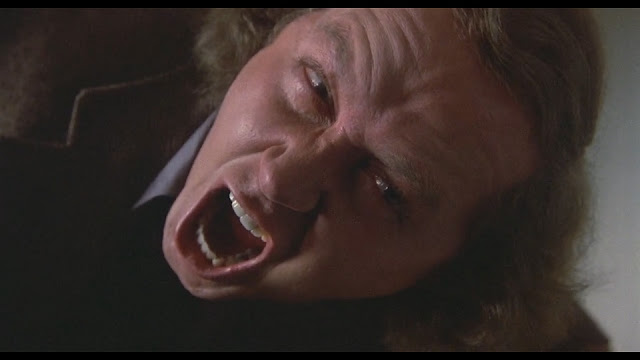 The music here is like a great 80s playlist, and has neat college tracks too, feeling nice and authentic. There's also a fun appearance by Oingo Boingo, a tolerable cover of Twist and Shout with a hilarious twist by the end, and the groovy title song. 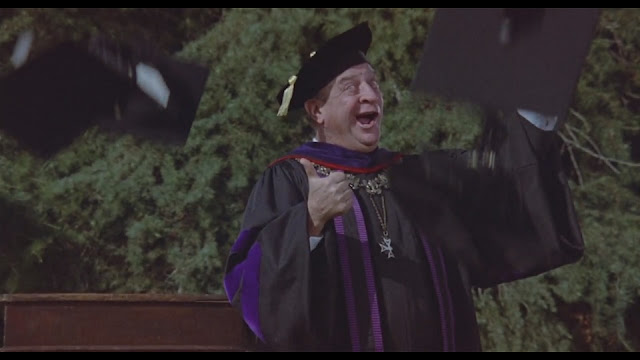 Back to School really is the perfect comfort food movie. If you're feeling down, or just wanna watch a comedy or 80s classic, this'll tick all the boxes and then some!...
Posted by Chris Hewson at 7:45 AM