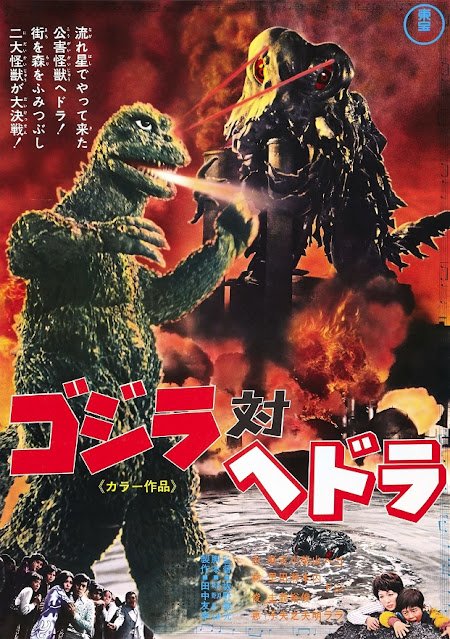 Godzilla vs. Hedorah, also known as Godzilla vs the Smog Monster, is the lovable monster's first outing of a new decade, and was given to us by Yoshimitsu Banno. He would quickly prove to be one of the more controversial additions to the series, getting immediately banned from Toho after a disastrous in-house reception, and a lukewarm public one. Over the years Godzilla vs. Hedorah has continued to ignite passionate debate over its merits and drawbacks, ranking either very low or high on fans' lists. Where does it stack up for me? I actually really quite enjoyed it, albeit with certain issues... As the world's pollution grows, a series of strange attacks occur off the sea of Japan, eventually culminating in the arrival of Hedorah, an ominous new monster, borne from man's reckless disregard for the environment. It seems only a miracle can save humanity. And while scientists try and figure out a way to defeat the monster, Godzilla arrives to oppose him...
In terms of traditional Godzilla fun, this movie delivers in spades! Everyone's favourite monster shows up early enough, has several encounters with his new foe, and the there is an all-round sense of fun! This is a perfect vehicle for showing kaiju cinema's highs...almost. 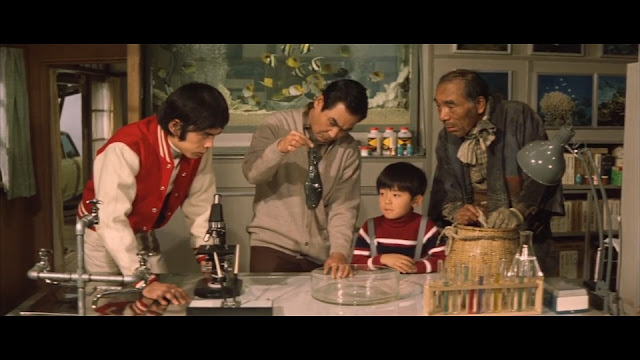 Where Godzilla vs. Hedorah alienates some people is in how bloody weird it all is! This Godzilla film is half childlike whimsy and giant monsters, and half psychedelic hippy mania, with animated moments, and artistic flourishes. These range from the amusing, to the frankly bizarre, and their overall success depends on the scene. But even the weirdest moments have something interesting or cool about them, even if they don't succeed. 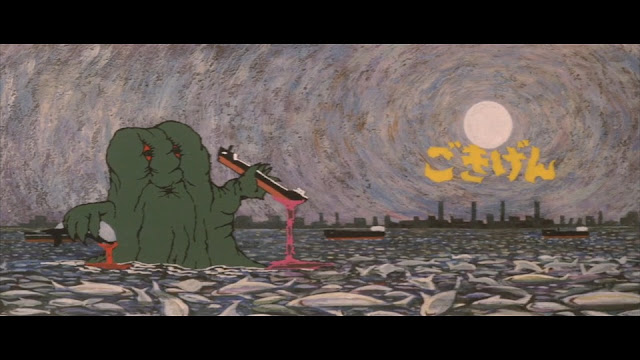 The tone is all over the place. This is often pointed at as the point when the series began to verge on the childish. I'd actually say it was the previous entry, but this does have goofy moments for sure, and a childlike focus. But in other scenes it can get surprisingly dark! Hedorah leaves behind ghoulish debris and corpses as he attacks. As effective as they are in some parts, moments like this are a bit of a downer, and the death toll is unnecessarily high, but there is one particularly hilarious moment in the dub-"At least 35 people have been killed and 300 buildings destroyed by these two giants". To quote a hilarious review, that's not a catastrophe, that's a fucking miracle!
The story is the most normal part of the movie. There's a good build-up of suspense, showing the threat in its various stages, and how both the government/military and Godzilla react to it. The characters are fairly standard. The kid and his scientific parents are likeable enough, while the family friend and reporter is fine, even if his party plan is spectacularly stupid. His whole relationship with the nightclub singer comes a bit out-of-nowhere, but she was decent. 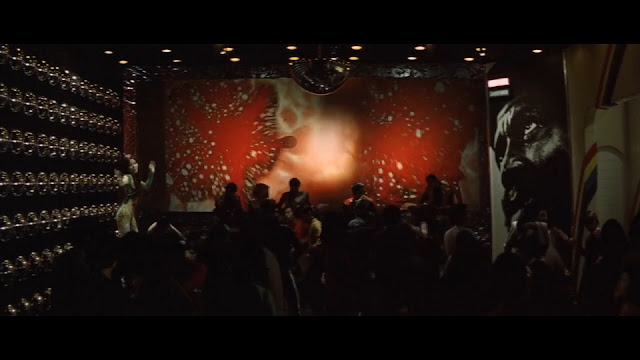 As with many Godzilla films there is a message here, and not a particularly subtle one. It preaches of the dangers of pollution, and how everyone should stop ruining the environment. It's about as subtle as Captain Planet, but hey, sometimes a message has to be given bluntly.
Godzilla is totally heroic here. He comes off like a semi-neutral force of nature. He doesn't like humanity, but he'll step up and save them when a pollution monster threatens the world. But he'll still give them a nice hard stare at the end, to keep the bastards in line! Hedorah meanwhile is a nasty villain. He only seeks destruction and pollution, and through his ever changing forms he comes up with new and increasingly deadly ways. 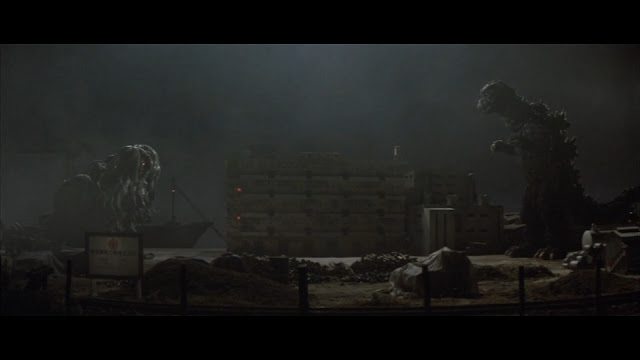 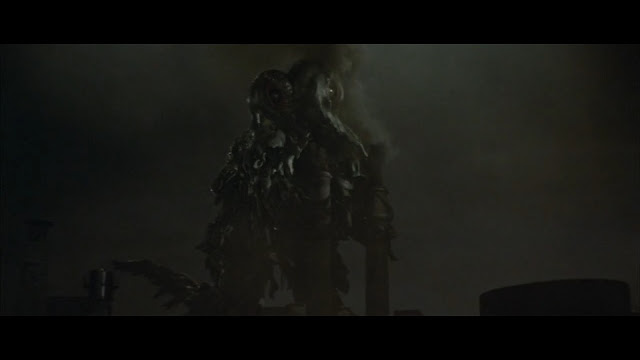 The monster fights here fun, even if they verge on the gross and occasionally disturbing. Poor Godzilla can't catch a break here! He gets beaten two ways till tuesday, but does ultimately triumph (with a little help from the military). Granted it was his fault their plan first failed, but he makes up for it in the end, so no harm no foul!
The effects in Godzilla vs. Hedorah are great, albeit disgusting! G is good as usual, and all of the cityscapes, modelwork, and destruction effects are convincing. It's the design of Hedorah that really deserves praise! He has at least 3 major forms, each different, and taking more effort to pull off than regular suitmation. Godzilla also pulls off a special move of his own, which comes off as one of the more ridiculous moments of the series. 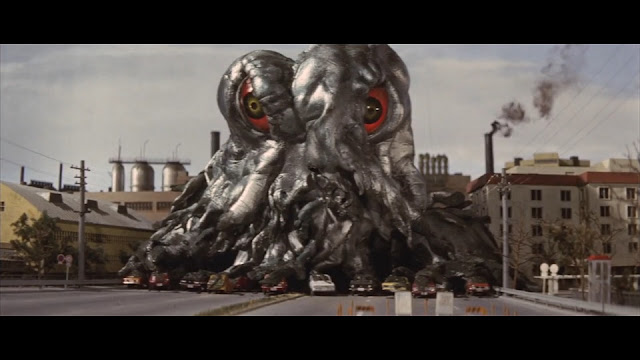 The cast all do a decent job here. Some of the performances are a bit cheesy, but nothing egregious, nor is the child annoying. Haruo Nakajima once again makes a great Godzilla, and surprisingly we have future G performer Kenpachiro Satsuma playing Hedora!
The score is nice. Silly, thrilling, fun, etc. There are some decent songs too, fitting the whole counterculture vibe the film has going.
The direction here is really good! One might question the sometimes strange directions it takes, and I still have no idea why everyone in the nightclub suddenly grew fish heads (was the reporter tripping balls or what?), but one can't deny that it all looks great. Banno captures the surreal and scary image of pollution really impressively, with the opening scene a highlight. 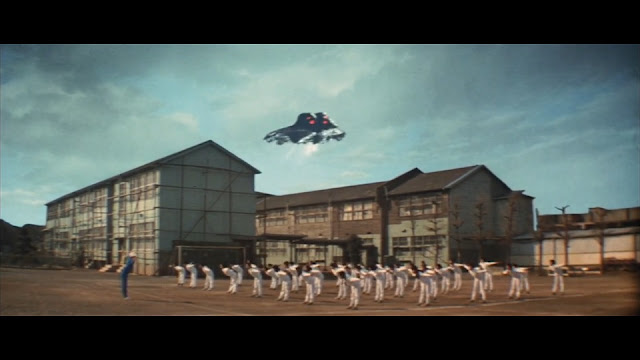 Despite the frosty reception to his film by Toho, and some fans, Banno never lost heart or his love for Godzilla, and intended for years to make a sequel. This earned a mixture of interest and mocking from people on the internet, and never came to pass. And yet his efforts did finally pay off in a way, as he is one of the producers responsible for the current American Godzilla series, from Legendary Picture! He passed away shortly after, in 2017. Not long enough to ever see his monster make a return, but definitely long enough to see Godzilla's present fame.
And as for Hedorah, he has coincidentally just come back! I swear I didn't intend to review this now deliberately! Toho produced a neat short film, using classic suitmation, and leftover suits from Godzilla Final Wars, still in fantastic condition! It's made a lot of fans happy, and hoping for more. 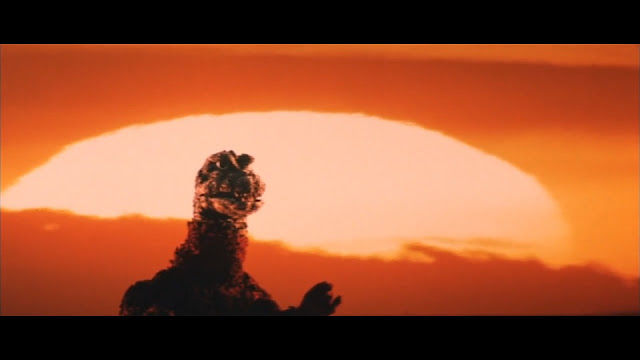 Godzilla vs. Hedorah isn't perfect, and both its ambitions and creativity do sometimes exceed their reach, but for the most part I think they're a success, and the movie is laudable for all it tries. It's not your regular Godzilla film, yet encompasses everything great about the series. And at the end of the day it has a clear message-Godzilla hates pollution, so don't litter or he will vaporise you!...
Posted by Chris at 7:49 AM