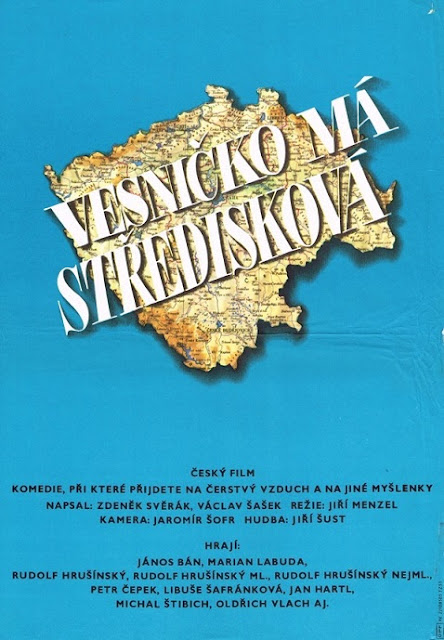 It's a bit of a joke among some moviegoers that all Czech cinema is comprised of middle aged men drinking beer and philosophising. Having seen a bunch, I can confirm this couldn't be further from the truth, but these kinds of movies are definitely present and very popular. Director Jiri Menzel specialised in them during his varied filmography, with one of the most loved being My Sweet Little Village... 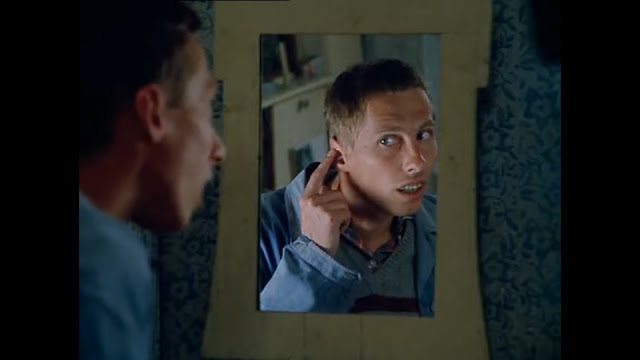 Otik is a mentally challenged but happy man, working a simple job as a truck driver's assistant to Mr. Pavek. Everyone in the village knows each-other, and their various goals and issues. These range from minor, to major, such as an accident prone doctor who can't seem to handle cars, and an unfaithful wife carrying on. A change seems bound to come when an exasperated Pavek refuses to work with Otik anymore, and the young man answers a call to work in the big city... 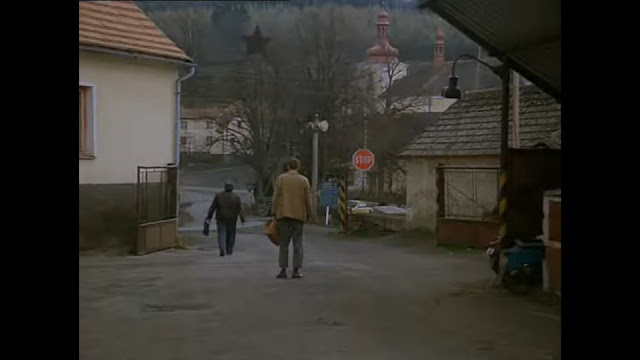 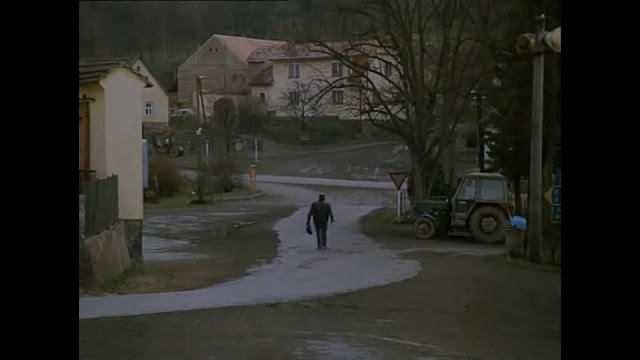 My Sweet Little Village (Vesničko má Středisková) is deserving of its reputation as a Czech classic, and even managed to be seen in America. The plot is exactly what you would imagine it to be, and there aren't many surprises, but not in a bad way. It's an effective story, and always enjoyable seeing where it goes.
The move focuses on the everyday life of this small village, exploring the lives, loves, and problems of its inhabitants. They've got plenty of quirks and defects between them, as well as positive sides. I liked this, and think the film does a good job of making this town feel like a living breathing place. The only problem was it leaves Otik a bit in the dust. I understand that it might have been a little difficult having the film focus on a main character who barely speaks and doesn't interact normally, but he is still the lead, and it's strange whenever he disappears for long stretches. 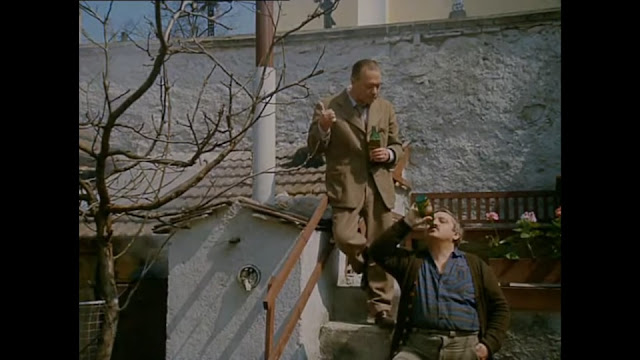 Otik is simpleminded and prone to mistakes, but is likeable all the same, and you feel bad for the guy when Pavek attempts to ditch him. It's admirable seeing how Otik tries forging his own path, though his neighbours feel he's not up for the challenge, and would be better off in his comfortable hometown among friends, than alone in a big unfriendly city. Pavek meanwhile is a good guy, with his own family to juggle, and a frustration with Otik that others try and dissuade him of. One thing I really liked about Pavek is how quick he is to defend Otik even when he hasn't forgiven him yet for past blunders. It feels realistic, and gives Pavek a multidimensional feel. 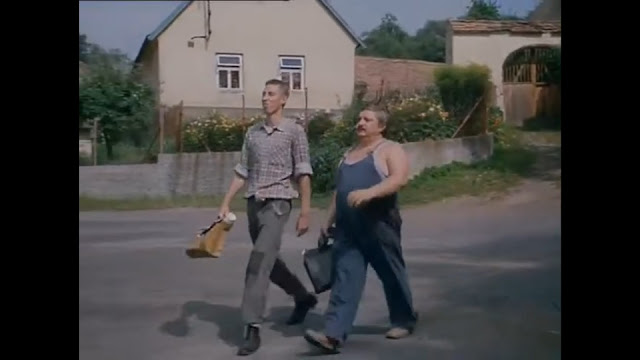 The remainder of the cast range from amusing to assholes, such as the philanderous spouse, and her brutish husband. Pavek's son doesn't get a lot of screentime, and while he's fine early on, his story in the last act felt unnecessary. It was a bit down for the film, especially an otherwise positive last act. It also felt completely out of nowhere, and is forgotten pretty quickly. It either should've been threaded in more organically, or just left out altogether.
Another notable character is the town doctor. A sensible fellow who often diagnoses his patients' problems, both physical and mental. He's a funny guy, while also knowing to give serious advice (like when he threatens to beat the shit out of one guy if he abuses his wife). Despite showing wisdom in these areas, the doc is a total klutz with his vehicular affairs, constantly getting into scrapes and crashes, culminating in some great moments later on. 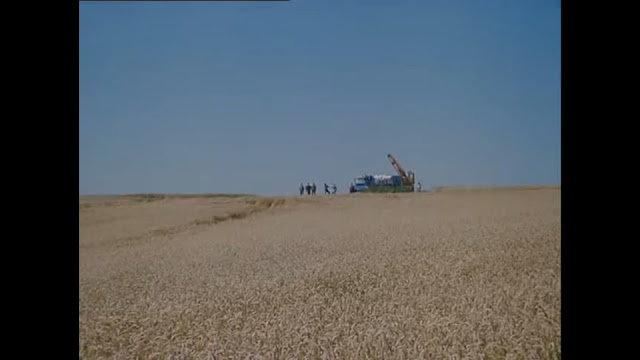 My Sweet Little Village has seen comparisons to Abbott and Costello or Laurel and Hardy, but really this is only visual. The movie isn't a double act comedy like those. In some ways it maybe could have benefited from such scenes, but I am glad it isn't a broad comedy farce.
Hungarian actor Janos Ban does great as Otik, delivering his performance mostly with expressions than dialogue. He's visually distinctive and unusual (this is a positive for sure), and reminded me of George Formby. Marian Labuda is a good straight man as Pavek, and shares good chemistry with Ban, even if they're unfortunately not often onscreen in the midsection. Libuše Šafránková  has a surprisingly tarty role, and does well. Petr Čepek  as is Rudolf Hrušínský as the town doctor. 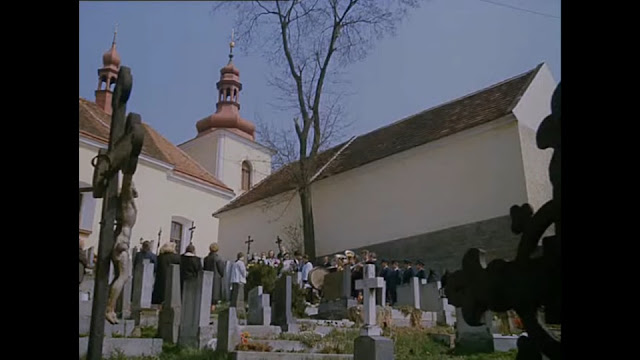 My Sweet Little Village has  themes, such as city life vs country. It doesn't insult the city, instead simply extolling the virtues of small town life (while also not portraying its citizens as all saints). The real villains of the film, if there are any, would be the rich folk who want to take advantage of Otik's departure and move in, doing what they want with this rustic paradise. 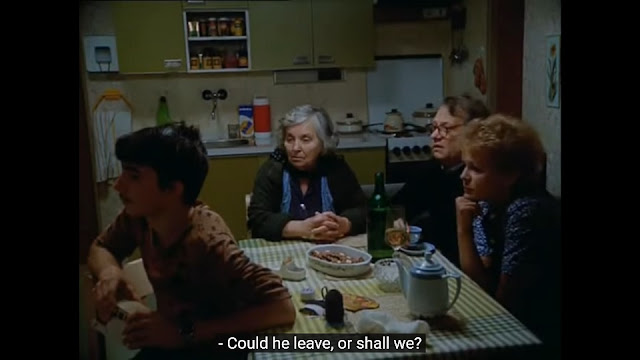 Filmed on location in a real life village, the film looks great, and is always convincing. We see wide rolling fields, nice old buildings, a  lakeside, and other nice sights. It succeeds completely in making you want to visit or live in such a place, for me at least. 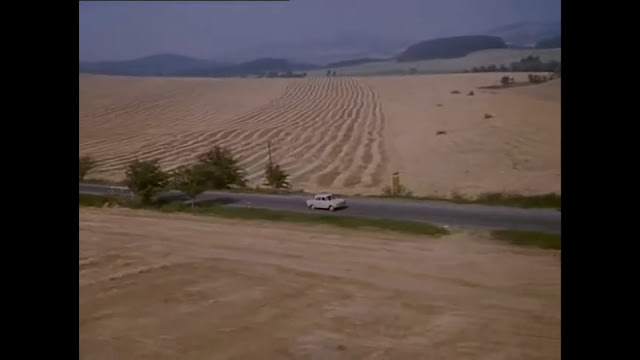 There's a lovely score here, with some calming and tranquil pastoral beats. There are also a few groovy tunes in the background of a few scenes, namely some Michal David songs. I recognised his voice instantly, which I'm pretty sure grants me immediate Czech citizenship. 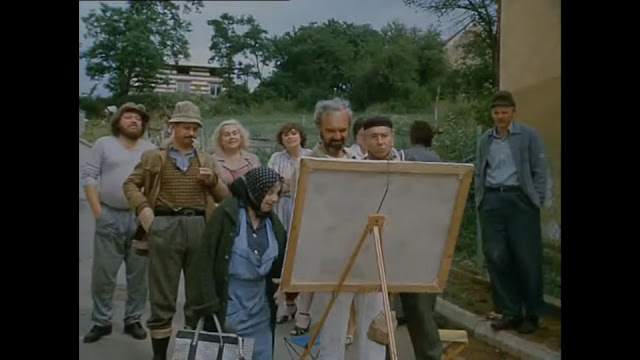 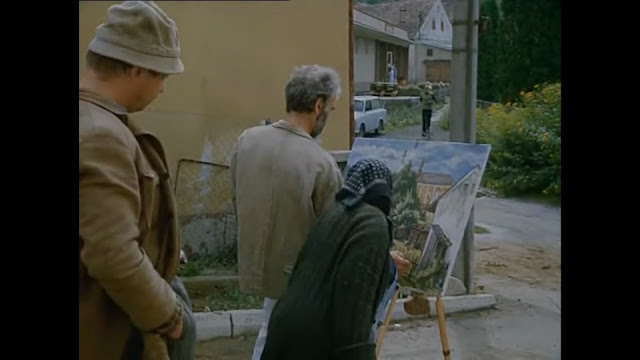 I think Czechoslovakian cinema is full of treats, and many kinds of genres. My Sweet Little Village in particular lives up to its title, and is a good portrayal of its country, and the movies it can deliver the world...
Posted by Chris at 6:01 AM