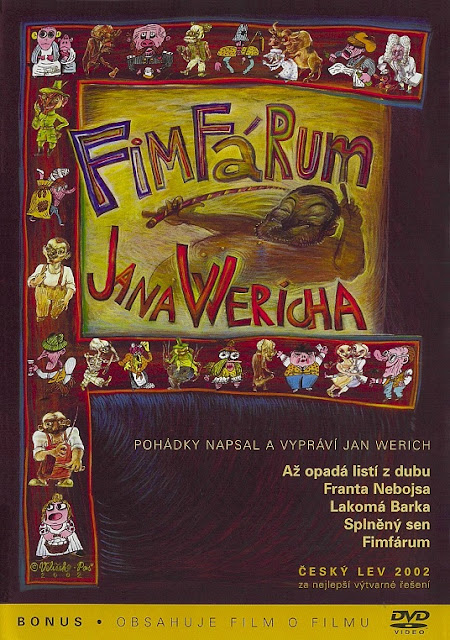 Jan Werich is still renowned as one of former Czechoslovakia's greatest actors, among other accomplishments such as being a playwright, and author. He passed away in 1980, but has left a wealth of material to enjoy, including the modern classic Fimfárum... 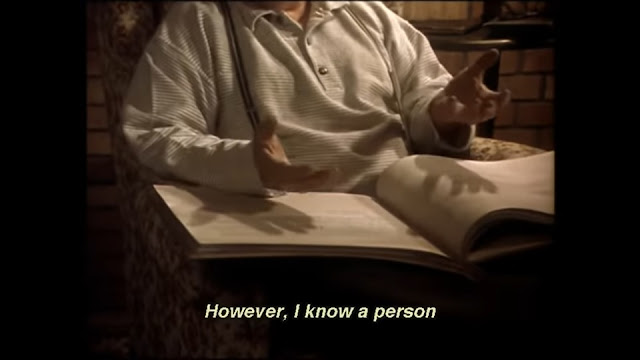 A wise old storyteller relates many stories to us. These range from a Faustian pact to maintain sobriety, a boy who shows no fear, a blacksmith and his devious unfaithful wife, as well as what exactly the mysterious Fimfárum is...
Fimfárum is a fairytale anthology, with a lot to say. It's made up of 5 stories, of varying length. A few are longer and more complex, others are shorter and easier to follow. The movie can be a bit to take in on a first viewing, but it never lost me, and you get the hang of it pretty soon. 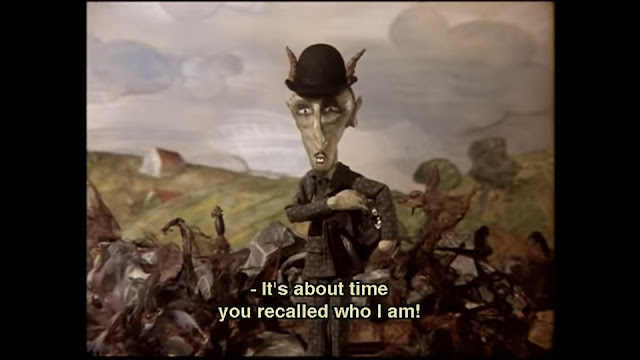 When the Oak Leaves Fall is a highly amusing take on Faust. It focuses on the alcoholic farmer Cupera, who makes a deal with the Devil to improve his crops, without realising he's betting the life of his newborn son. Now Cupera must think of a way to thwart the Devil's plan. He does in a bizarre and spectacular manner. But just when you were thinking maybe he's turned over a new leaf, he immediately begins falling back into old habits. And so the Devil comes knocking again!
From here on the story takes an interesting journey, with a crazy setpiece in hell, and a satisfying ending (though Cupera's wife Julia would want to beat him upside the head if she ever knew what he'd been doing!). 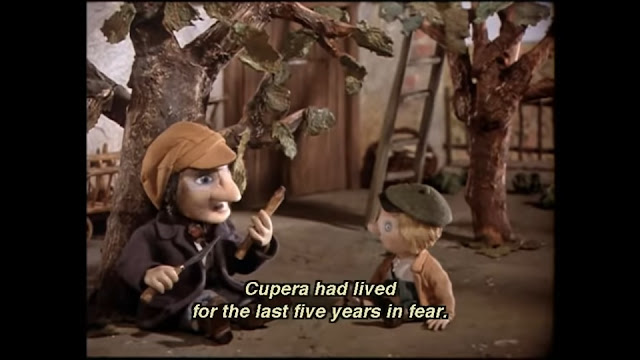 While Faust sold his soul for knowledge, and occasionally for love, this subject sells it for sobriety! He does successfully trick the devil and guarantee his safety, but he could've just booked himself into an AA meeting! 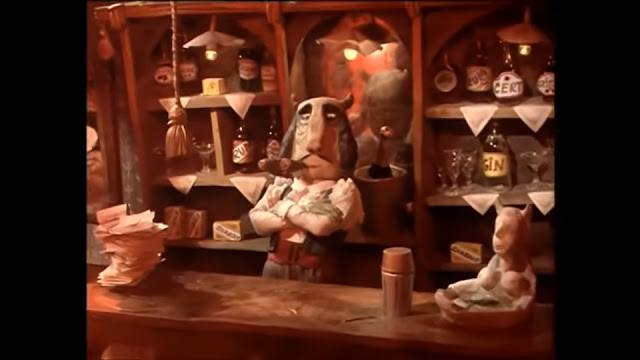 Fearless Franta is a shorter and more simple story, about a frail couple whose baby is a big and bold boy. He doesn't talk for years, until tasting a bowl of awful soup. When asked why he didn't speak till now if he always could, he replies "Up till now there was no cause for complaint". We soon learn that nothing scares him, and when his concerned father asks a friend for help, Franta is allowed to stay in the local pub during nightfall, when ghosts come out to play. 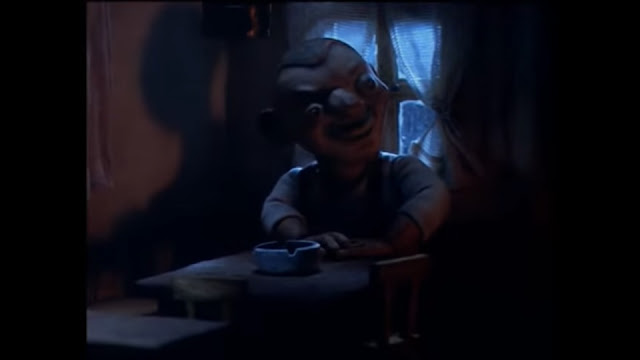 I really like the portrayal of Franta. While he seems crazy at first, he's soon shown to be such a likeable guy, due to his forthright honesty. He may not talk much, and may not be scared of anything, but this is never portrayed as a negative, just a quirk, which he shows the positive sides of. Just because he's not afraid doesn't mean he's obnoxious about it. He genuinely wants to learn. He's a good son too, and beats the shit out of ghosts when necessary. 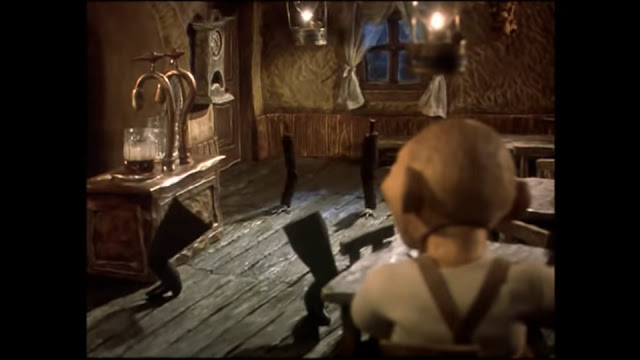 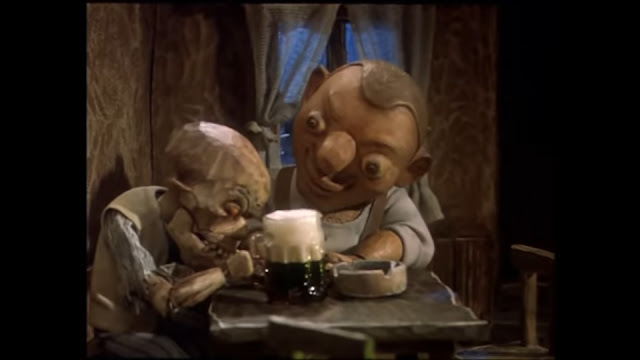 There's a great climax, with neat visuals like seeing the bar change, and the hilarious spectacle of Franta setting all the mean ghosts straight.
Mean Barbara was perhaps my favourite story of the bunch. As the title suggests, it's about a miserly old lady, considered the bane of the village. The twist however is that she's not actually that bad! I mean, she won't win 'Nicest person in the village' anytime soon, but she simply wants to keep to herself and save up her money, but others insist that just because she has more, she should be obligated to help out, namely a family with too many kids for their own good. Sharing is good because you choose to share, not forced into it.
Through a series of events beginning with the theft of her pig, the family end up killing Mean Barbara (or do they?), and hurrying to dispose of of her body. But through various distractions, everyone else in the town gets involved, each thinking they are responsible and trying to cover it up. 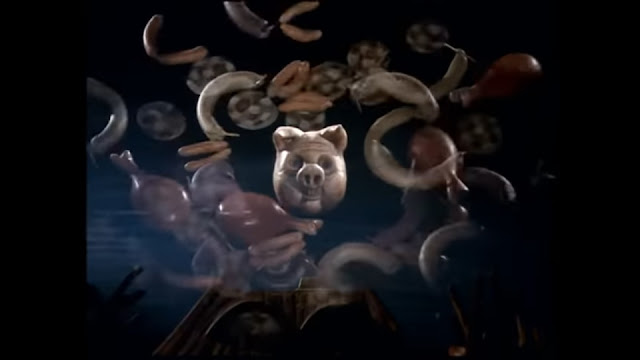 An interesting thing is that despite 'hoarding such wealth', Barbara isn't actually a rich dame. She's a normal housemaid, who happened to save up well, and others want to take advantage of her. The other townsfolk, who imagine themselves as being poor innocents, are actually underhanded and cutthroat, stealing from their neighbours. Imagine if someone broke into your property, killed and stole a pig of yours, and you were considered the bad guy!
Mean Barbara leaves us with the nice moral that not all nice people are good, and someone being grumpy doesn't mean they're bad. It ends with a hilarious and dryly witty note about humanity and fiction.
A Dream Fulfilled is a fun story about the follies of gambling, and of following visions and dreams. We see the trouble that can get you in, as well as the unexpected upsides.
This is probably my least favourite story by default. It's still good, with superbly creative animation, but it felt like it could've been cut and made the film smoother. 5 stories can be a lot, and there's always room in sequels. But I can't complain too much. 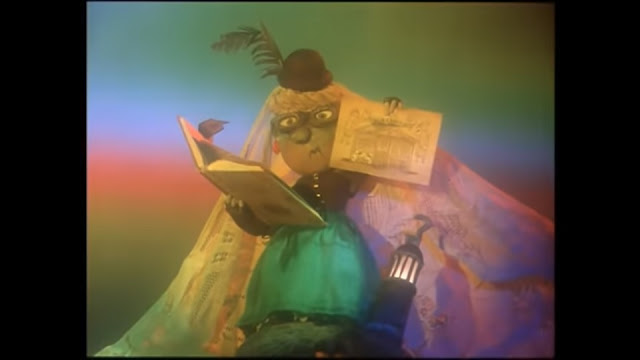 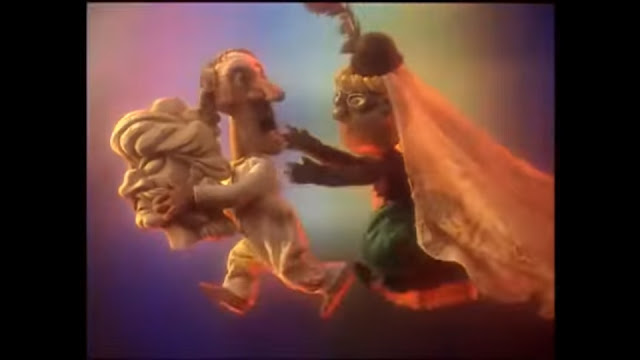 There are many funny moments here, including the narration telling us how Loudal "...was always quarelling with his wife. Though we might admit that his wife was by nature ready to argue with anyone, at anytime, about anything, we must acknowledge that in the case of Loudal, she was in the right and not him."
The dream sequences are nicely surreal, and the portrayal of Prague's fancy suburbs is fantastic and imaginative.
Fimfarum is the aptly named final story. It tells of a naive blacksmith, who blindly trusts his unfaithful wife, who's constantly scheming to have him killed. A corrupt nobleman gives him impossible tasks (under threat of execution), but each time he succeeds, with supernatural help. His wife constantly insists he kill himself and after the third attempt he gets suspicious!
There are many fun and creative sequences here, culminating in a satisfying final act. Although I didn't quite get the outcome. he blacksmith would rather let the bad guys die than be taken by the Devil? But if they die, wouldn't they be taken by him anyway? I also feel bad for the poor innocent cows who get frozen with the evildoers! 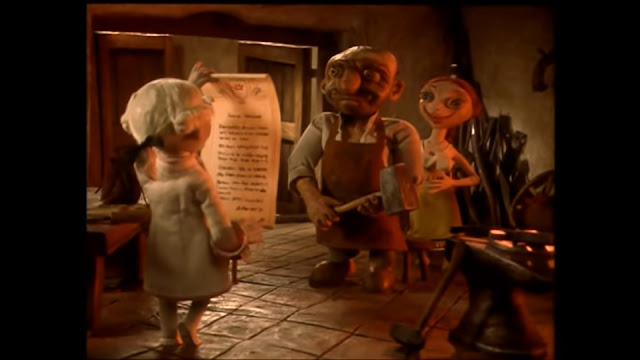 Werich gives us many words of wisdom, and funny and clever aphorisms, like "He who asks too much hears too much". It teaches all about morals too, and the lack thereof some exhibit. Some stories here teach about hypocrisy, greed, and human nature, others warned about alcoholism, gambling, leaving well enough alone, and being too trusting of those who don't deserve it. They work as fairytales, and as parables for life

Fimfárum has a wicked sense of humour, with darkly funny asides, and clever inversions on the fairy tale formula. It's never a mean spirited movie though, and pretty much eevery story ends on a happy note. No-one was stuck in hell, lost their kids, got executed, etc, and the bad characters were punished (usually). 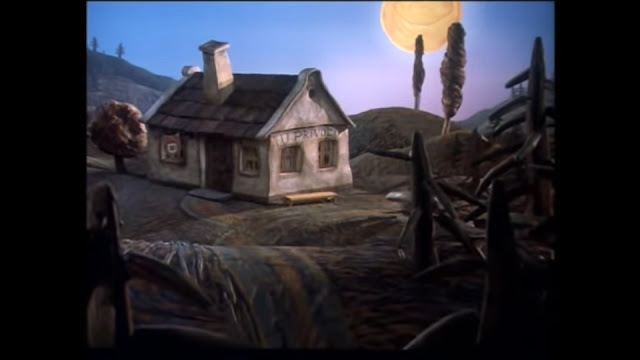 The most interesting thing about Fimfárum is who narrates and voices the film-Werich himself! Jan Werich passed away in 1980, but he personally recorded his Fimfarum book for audio, so even though this movie was made 22 years after his death, it still uses his voice in its entirety. What a lovely tribute to do for someone.
The animation in Fimfárum is great. Stop motion is such an interesting an unique art form, and this film uses it to its fullest. There's a lot of variety here too, with regular stop motion, animation, and paper cutouts too. The characters are designed with such an off-kilter look, and each look funny and distinctive (and potentially terrifying for more sensitive viewers). The settings range from crazy to gorgeous, with the film having a nice rural feel to it.
The score is great. It's made up of really energetic tracks, using discordant instruments to great effect, moving at chaotic speeds and really building a great tone. The film ends on a sweet and boisterous song by Werich. 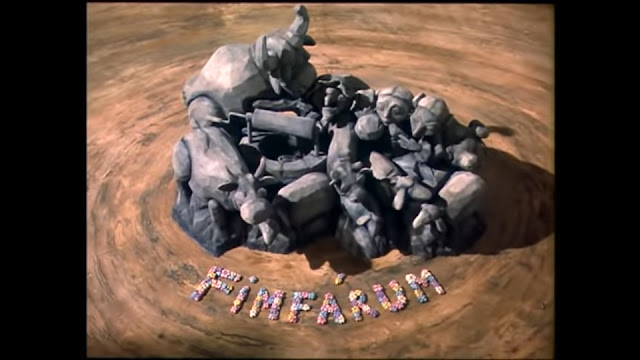 Jan Werich's Fimfárum is a great time! It's a good introduction to Czech cinema's weirder side, in a more accessible way that something like Jan Svankmajer may be. If you like stop motion cinema and are looking for something new to watch, look no further than here...
Posted by Chris at 7:29 AM