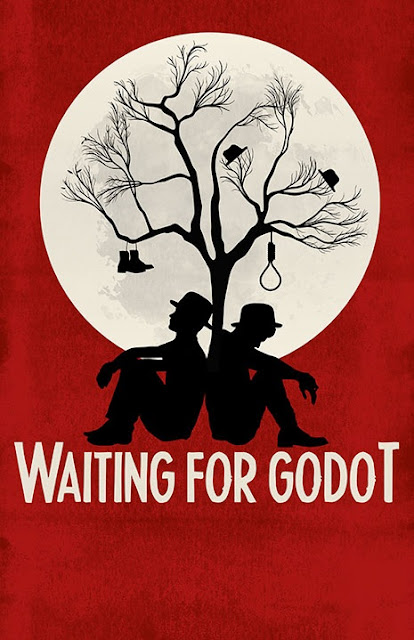 Ever since my teenager years I've had an interest in absurdist theatre, with its imagination, sly comedy, and sometimes dark themes. The pinnacle of this genre includes the works of Eugene Ionesco, Rosencrantz and Guildenstern are Dead, and most notably of all, Waiting for Godot... 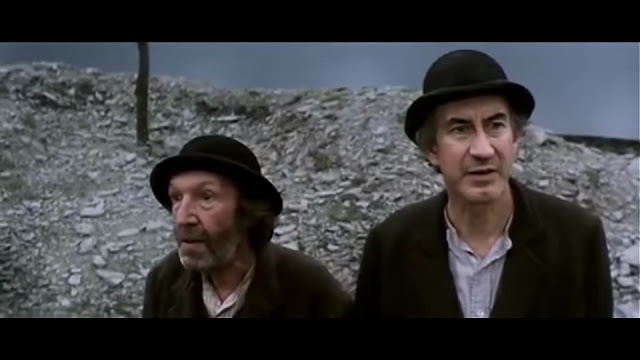 Vladimir and Estragon (Didi and Gogo for short) are two destitute tramps. They live a meagre existence, bolstered only by the promise of Godot, a rich man who has pledged to take them into his care...Just as soon as he arrives. But as day after day goes by, filled with endless distractions and meaningless conversations, he never shows up. With each new day, the pair wonder if things will be any different this time... 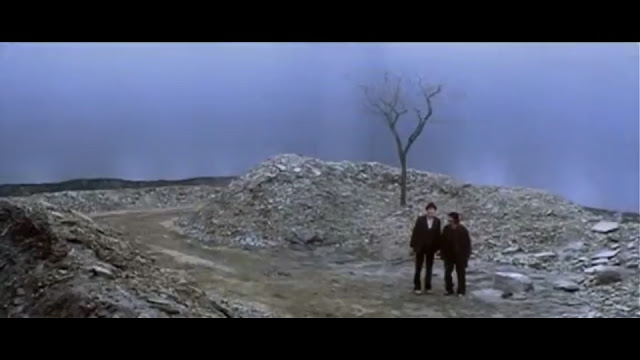 Waiting for Godot has had a long history. From its inception in the 1950s by author and playwright Samuel Beckett, it's had many iterations, in many countries. While it's never had a film adaption per se, it did get a filmed performance especially for video. While more famous actors have played the part on stage, this has always been the quintessential version of the production for me, least of all because I live absolutely nowhere near the theatre.
The story is described simply by the title. Not only does very little happen, the plot is structured around how little happens. Much of the action is these two friends trying desperately to pass the time, and trying to stave off boredom and disappointment. These moments are broken up by occasional visits from others. Despite this minimalist style, the play is never boring, although there were a few moments where I felt it dragged slightly. 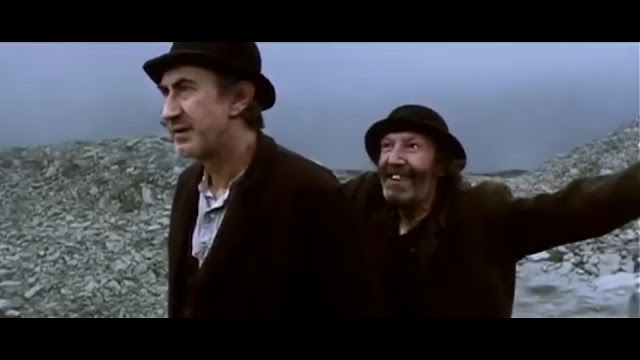 The dialogue is a mix of funny, tragic, and observant on life as we know it. Repetition is used to great effect. This includes arc words/phrases, and specific moments like Vladimir says different synonyms, while Estragon always gives the same.
Didi and Gogo are well developed leads, wth distinct personalities and foibles. The play doesn't delve deeply into their backstories, but we get enough through little snippets, and get a good picture. They're at times tragic figures, but there's enough comedy (some of it a touch puerile) to keep them from being depressing.
The only other characters are Pozzo and Lucky, another double act who are by far more extreme. Pozzo is a toffee-nosed aristocrat, and Lucky his put-upon servant (or slave might be the better word). It seems a pretty cut-and-dry pairing, but there's more to be seen on closer inspection, especially upon their return near the end. The play never goes into full detail, or explains it to us outright, but you definitely get the sense there's more than meets the eye. 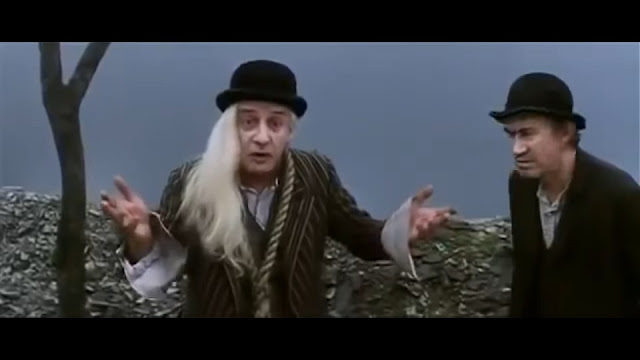 Godot himself is naturally an unseen character, and whether or not he even exists is debatable. And if he does exist the asshole is in need of a good trouncing! Constantly late, willfully obtuse, and how much he really cares about the welfare of the heroes is likewise up for question.
The themes of the play are rich, and much can be analysed from the characters, their dialogue, and actions. People have come away with many different theories, and it's well written enough to support all of these equally, without feeling cheap or underwritten. 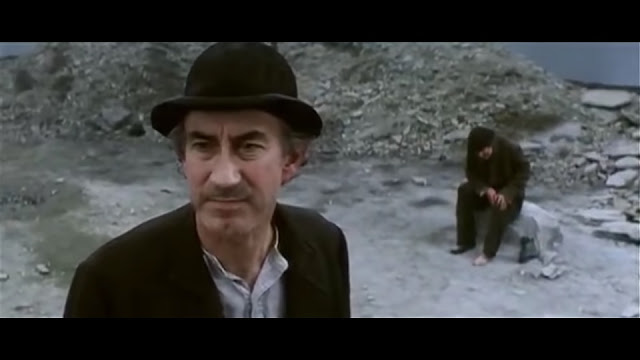 Indecision is an impart part of the story. Will the protagonists wait for Godot, or will they leave? Will they take action on their lives themselves? Or will they flounder. Even for something as simple as wanting to sing, they can't decide for themselves what to choose.
Twice in the play, Estragon has been beaten up offscreen, and when pressed on why/how it happened by Vladimir (who insists Gogo must have brought it on himself somehow), he says he wasn't doing anything. Perhaps that signifies that if you go through life doing nothing, that itself is a negative action, and can bring about bad consequences, with being bashed a symptom of the bigger cause. 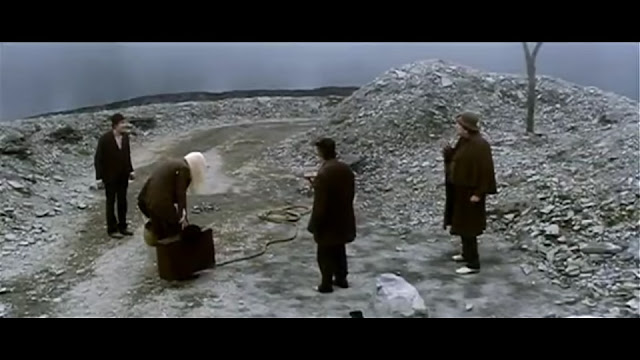 Memory also plays a big role, with the characters at times behaving like people with Alzheimer's. They will consistently forget things, or have words right on the tip of their tongue, and rely on the other to remind them, with mixed success. Perception of reality is a theme too. The leads aren't sure if it's been a single day, or much longer. There are changes that suggest more time has passed, yet also evidence that it hasn't, giving an ambiguous air.
One last observation. As much as the heroes detest waiting endlessly during the day, they look pleased when night falls which is interestingly after the point they know Godot won't be coming for the day. Little actions can say a lot here, and make you ponder their meaning. 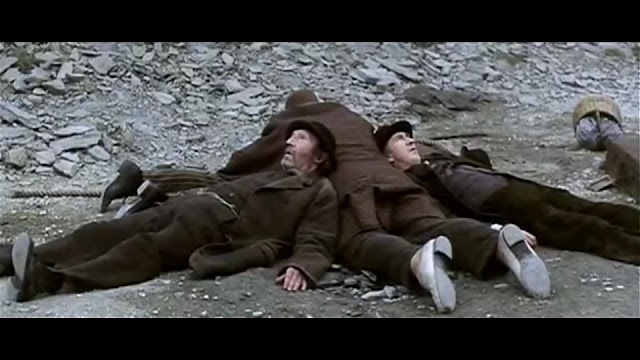 With a cast of only four (plus one playing the messenger boys), Waiting for Godot is carried by the few players we have-Barry McGovern, Johnny Murphy, Alan Stanford, and Stephen Brennan. They each deliver a different kind of performance, with perfectly-delivered comedy, wit, and emotion. McGovern's confrontation with the messenger at the end has always stuck with me. Brennan's crazed monologue as Lucky is mind-bending, and a feat every actor would dread, but feel a great pride in completing!
The set is likewise minimal, but says a lot. It captures the feeling of emptiness and desolation, but also a sense of prettiness. It also manages to look convincing, while also having enough of an artificial air to it. 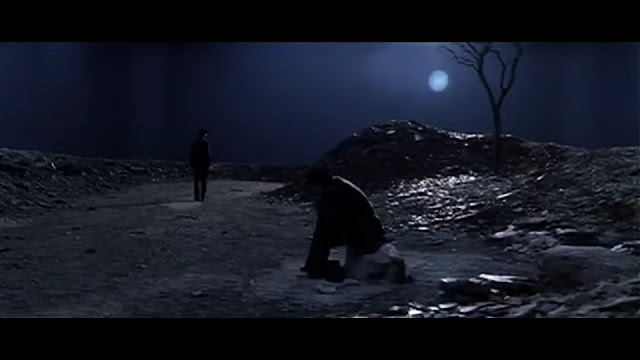 Waiting for Godot is a play that says a lot with a little, and while its minimalist style or oblique story may not be to everyone's tastes, this is definitely a great introduction to the genre, and story in its own right, and if you can catch a live performance you'll definitely be lucky...
Posted by Chris at 7:22 AM