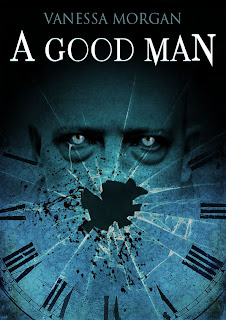 This review was meant to be up on the 15th, but I'm uploading it a bit later, due to me being busy with stuff, and thanks to bad ol' procrastination, the usual curse that all writers, whether it be for reviews, stories or otherwise, suffer from (I was once writing a crime/comedy with my Will Addyson character about a gang called The Ramblers, a vicious robbery group. At one point, I was stuck at what to write for a character in the latest scene that I'd written, so I decided to think of it later. ...That was in 2009, and it's now 2012 and that sentence, along with everything beyond is not yet finished!).

Vanessa Morgan is a writer of horror fiction and has been called 'the female Stephen King'. While I haven't read her first two books, The Strangers Outside and Drowned Sorrow (yet), I have been sent a copy of the script of A Good Man-Morgan's latest book and upcoming film-for review.

The plot of A Good Man centres on Louis Caron, a 55 year-old (when he died) vampire, who, despite his nature, strives to be a good person-helping the homeless, and is a vegetarian. He has two friends, Vincent, who is a coworker of Louis' at the bar where he works, and and Emma, Vincent's girlfriend.

Louis is a close friend of Vincent and Emma's, and when she falls pregnant, they ask him to be the baby's godfather. Louis, overjoyed, accepts, but he's pressured by both the head of his 'vampire support group', who warns Louis that he'll have to leave them eventually, and by policeman Inspector Taglioni, who is getting suspicious of Louis. Soon enough, things get worse and worse for Louis...

While it is pretty short, this is a great story! The best way to describe it is as a mix of black comedy/horror/drama. The characters are well-written, the comedic moments are funny, and as for the story, it goes from humour to being very dark, and it segues from tone to tone seamlessly, eventually culminating in a great ending. The story also has some dramatic moments, that are all handled very well.

As for negatives, I...honestly can't think of any. A Good Man is a great story and is well worth the read!
Posted by Chris Hewson at 8:08 AM