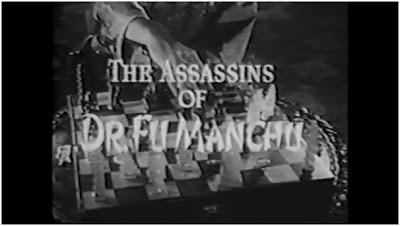 The Assassins of Fu Manchu opens with the usual voice-over during the opening-credits, except this time it's augmented as hell! Since this is unremastered footage of a show that probably hasn't aired since the 50's, there are a bunch of glitches from booming, distorted voices, to tracking, to rainbow interference. 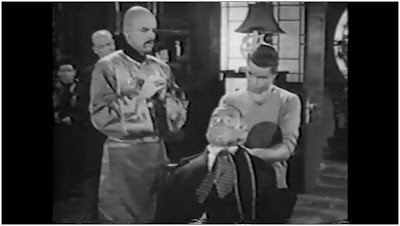 In Assassins, Fu Manchu wishes to halt an American secret experimental plane project indefinitely with the use of his specially trained assassin!...    ...Yeah, only one assassin, hence the pluralised title!

The episode opens with George, Fu's special assassin training on a dummy. Watching the test is Fu Manchu himself, and an associate. George leaves the room, and Fu Manchu explains to his associate that George is the son of a secret service man who was investigating him, who he had executed, and then raised George as a member of his organisation, teaching George to be just like him. Then Fu explains his plan and what he wants the associate to do... 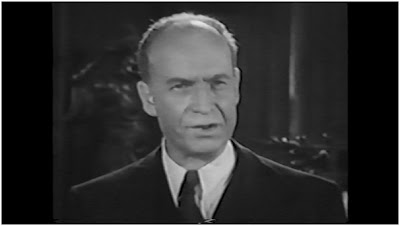 We cut to a board discussing whether or not they should reveal the planes they're manufacturing to the public, and they end up voting to keep it a secret, so unfriendly countries don't try to steal the designs. One of the board members, Bishop, goes to his office, and unbeknownst to him, his cigar case is poisoned... 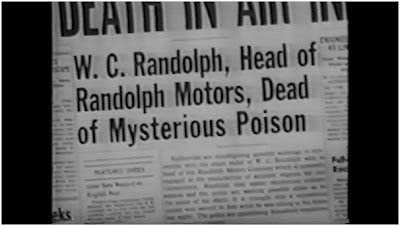 Dr. Petrie investigates the case on the behalf of the plane company (and in a funny bit of 50's slang (I guess), he says how of all the weird cases he's been on, "this was the topper!"). Strangely though, the company's head declares the case closed and demands Petrie off the case. He goes to his office (or whatever) and tells Betty of these events. He tells her not to bother about the matter and not to tell anyone else. After Petrie leaves, she immediately calls Nayland Smith and tells him about it, telling him to come over from England immediately! That's women for ya! No wonder us guys had to keep them back in line back in the 50's! (I can make a sexist joke if I'm reviewing something from the 50's can't I?). 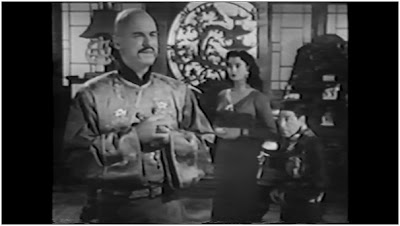 Meanwhile Fu Manchu hears of Nayland Smith's arrival and sends George and Karamaneh to stake out the hotel where Smith is staying, booking the room next to Smith's. Smith talks to Betty over the phone when he hears noises from the next room and becomes suspicious. He finishes the phone call, but pretends he's still talking, and he goes over to the wall leading into the next room, inspects it, and he plows straight through it! He finds Karamaneh and holds her at gunpoint, and he questions her until George comes into the room, sneaking behing Smith and tackling him. The two scuffle until Petrie arrives. While Karamaneh escapes, Petrie and Smith manage to detain George, who, disguised as a hotel bellboy, claims that he came into the room, saw Smith with the gun, and assumed he was a bad guy. 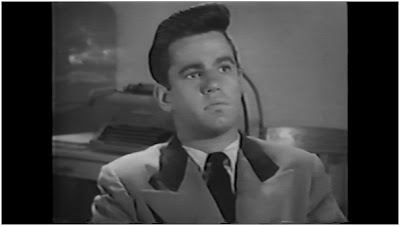 Smith doesn't believe him and he has George taken to the police station, where he tells George about a friend of his, who was investigating 'an evil man' and he and his family went missing, and that the friend's son would be the same age as George is now. George leaves in a huff, but he's unsure about whether or not what Nayland Smith told him was true. 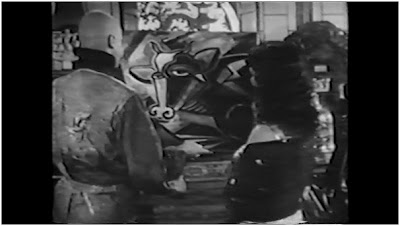 George goes back to Fu Manchu's headquarters, and he is given his first assignment-assassinate Some Guy (I didn't catch his name, assuming it was ever said). Fu sees that George is unsure, so when George leaves, he assigns one of his henchman to follow him and do the job if George fails... 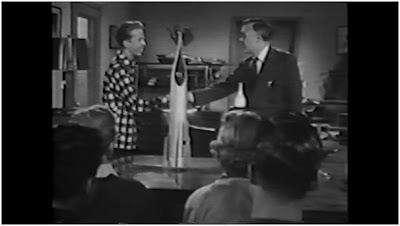 Will George realize he's on the wrong side?
Will Dr. Petrie and Nayland Smith prevent Fu Manchu's evil assassin?
Will 1950's sexism prevail?

This is an entertaining episode! It has great characters, decent acting, and it partially delves into some of Nayland Smith's history with Fu Manchu, which is cool (although there isn't much said). It's plot does have a lot less meat on its bones than Vengeance though, but that isn't too much of a problem.
Posted by Chris Hewson at 10:11 AM