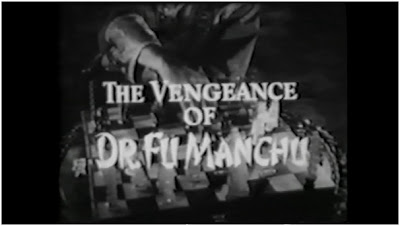 When it comes to actors playing Fu Manchu (none of whom were ever Asian), they've always spoken in a regal British accent, rather than attempting a Chinese accent. After all, if Christopher Lee tried to play Fu with a Ching Chong Chinaman accent, all intimidation would go straight out of the window and into silliness-and this is Christopher effin' Lee we're talking about here! With this in mind, this would be a good  time to say that yes, Glen Gordon's Fu talks with a Ching Chong Chinaman accent! 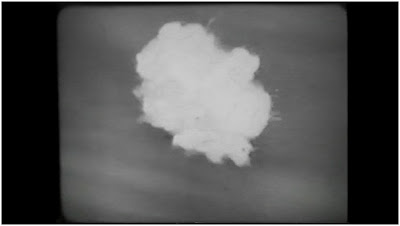 The episode is about 'The Devil Doctor's' evil plan to take over a chemical company and use it to secretly make weapons!... 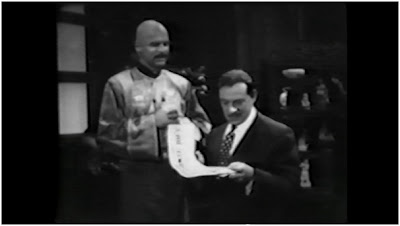 The episode starts off with Fu Manchu talking to his henchman Manson about his plan. He has killed James Le Conte, head of Argosy Chemicals. Manson has bought stock in Argosy, per Fu Manchu's instructions, and he has made sure that the board votes executive Alexander Baldwin to take Le Conte's place. Baldwin is an activist for world peace, and Fu Manchu intends to use this against him and con Baldwin. Fu wants control of Argosy because the chemicals it manufactures are esssential in making explosives. 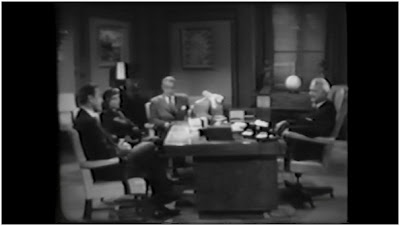 Manson goes to Baldwin's office, claiming to be a supporter, and tells him that instead of selling munitions to other countries, which will use up the remaining chemicals the company has (or something like that, it's sketchy), a better alternative is a chemical company in Brazil, Rio de Janero that needs those chemicals as an insecticide, among other uses for clearing forests for cultivating crops. Baldwin enthusiastically agrees to the idea, having no idea he's being tricked...

We then cut to our first look at Nayland Smith, Dr Petrie, and his secretary Betty. Smith has recieved word that Argosy chemicals have been sold to a 'country behind the Iron Curtain'. Smith also explains that an agent of his followed Fu Manchu to Rio and was later found killed-burned into his forehead was the mark of Fu Manchu. Smith and Petrie, Petrie a stockholder himself, go to meet Baldwin. They ask whether or not there's any possibility of the chemicals being used for munitions behind Baldwin's back. He denies the possibility and sends the two out. Then he calls Manson in, who assures him of the deal's legitemacy. 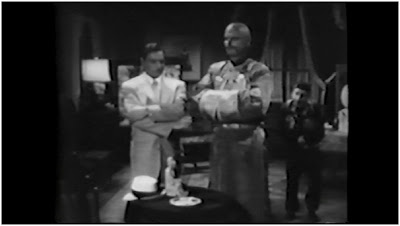 Smith, Petrie and Betty intend to go to Brazil, and Fu Manchu, knowing this, follows them. It's here in the episode where the show's limitations are shown-since each episode is only about 25 minutes long, this is how the plot goes: Smith, Petrie and Betty go from America to Rio de Janero, book a hotel, and investigate Argosy's chemical warehouses under the guise of inspectors from Argosy's auditing division...and instead of this actually happening, all of it is told to us in about 10 seconds in voiceover from Dr. Petrie!

Smith and Petrie talk with Manson and a Mr. Gonzalez about the warehouse's shipping records, and after they leave, Manson reports back to Fu Manchu. While Manson thinks that Smith and Petrie were convinced , Fu thinks otherwise, and he instructs Manson to set a trap for the two. Meanwhile, Smith explains to Petrie and Betty the clue he noticed. Then the three decide to go to a restaurant for dinner, because there clearly aren't more important things at stake here! After that, the trio go to one of the warehouses to covertly investigate the contents (covertly, even though both Smith and Petrie are in bright white suits! They'll stick out like disco-balls!). Smith and Petrie go inside while Betty doubles as a watchmen for them, and their getaway driver (does this lady have the BEST secretarial job or what!). She is approached by a local police officer, and she explains that she's waiting for her two friends who are at the nearby bar. The cop is fooled, but he stays behind with Betty anyway, to keep her safe, as it's a tough/violent area. 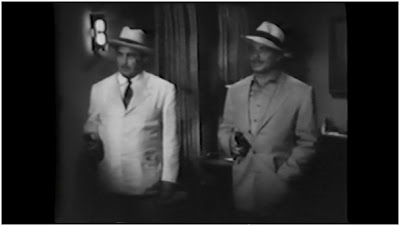 After finding evidence that the chemicals have been smuggled out, Smith and Petrie are spotted By Manson and security. They manage to escape outside to the car, where the cop is still waiting, and they act drunk. The cop believes that they're just drunk tourists and tells Manson that the two thieves are likely someone else (vote this cop for the Darwin award!). Manson knows that the two are the thieves, but he can't admit that to the cop, given the smuggling he's hiding.

Smith and Petrie go back to their hotel room, discussing the case, and saying that they won't bother the police this late at night and that they'll wait until morning! These two are in line for a Darwin themselves! Suddenly Manson and a few henchman burst into the room, holding the two investigators at gunpoint...

Will Smith and Petrie get out of this alive?
Will Fu Manchu's dastardly plan succeed?
Will this climax be wrapped up immediately in under thirty seconds? 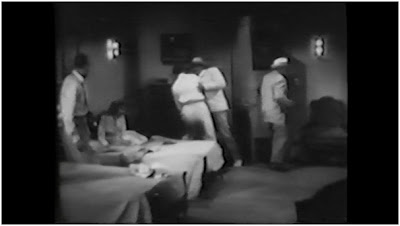 This was a fun first episode, albeit some hilariously abrupt scenes. The acting is decent, the heroes are cool, and the villains are devious and entertaining...though Glen Gordon is a terrible actor! He's still fun to watch though, so that's a plus.

Another note about this series is that each episode ended with Fu Manchu, angry about his foiled plans, going over to his chess-board, grabbing a piece from it, and snapping it in two!... 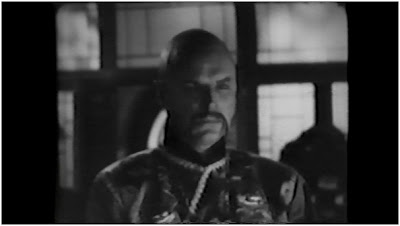