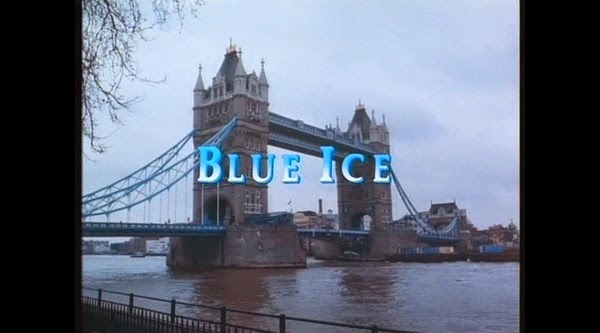 Michael Caine must really like the name Harry. Harry Secret Agent Man With No Name, Harry Anders, Harry Brown. I swear, fifty years from now, it's gonna read Harry Caine on his tombstone.

I'm kicking myself for not having talked about 1992 British crime-espionage mystery Blue Ice sooner! It really is a favourite of mine, but it's unfortunately a pretty forgotten film. As far as Youtube is concerned, this movie doesn't exist, aside from one short behind-the-scenes video of Sean Young talking to a camera, and Michael Caine saying she was great to work with, and insisting she's not crazy. Hell, the extremely short Wikipedia entry had a massive error about Sean Young's character-one which I've now removed.

Jazzclub owner and former secret agent Harry Anders (Caine) is living comfortably until Stacy Mansdorf (Young), the wife aof the American ambassador to England, comes into his life. The two develop a romance, but things go sour when Harry does a favour for her and things go pear shaped- An ex-boyfriend of Stacy's previously gave her urgent information regarding something (his call being tooo frantic and rushed to be specific), and is found dead by Anders. Calling on the help of government agent Garcia (Bob Hoskins-R.I.P.), Harry tries to find out what's going on, but is soon thrown in way over his head... 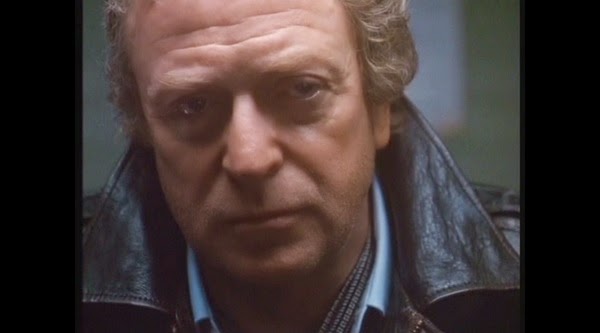 The first twenty+ minutes of Blue Ice don't focus on the sinister goings-on at all, but instead on Harry and Stacy's romance, which works, as it establishes the characters nicely. We wouldn't care about these characters if we didn't know them. Following that, the plot kicks into gear. What's going on is a mystery for the majority of the film, and it's handled really well.

Michael Caine is a great lead, but if I didn't mention that, you'd assume it anyway, because he's Michael Caine! The guy is one of the best actors to have ever lived! He has great dialogue, and numerous great moments, from the record scene I'll get to later, and one one where he rebukes the threat of a hostile police detective-"Now look what you've done. You've frightened me so much I'm spilling my tea.".

Bob Hoskins' first scene is pure over-the-top action, that I'm pretty sure is deliberately done so. It has a goofy car chase with Hoskins barrel-rolling over the bonnets of cars spraying machine-gun fire, and firing grenade launchers at terrorists. It's ridiculously awesome! And of course, it all turns out to be a training exercise. 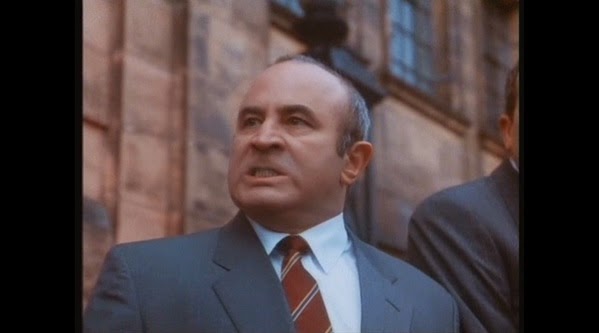 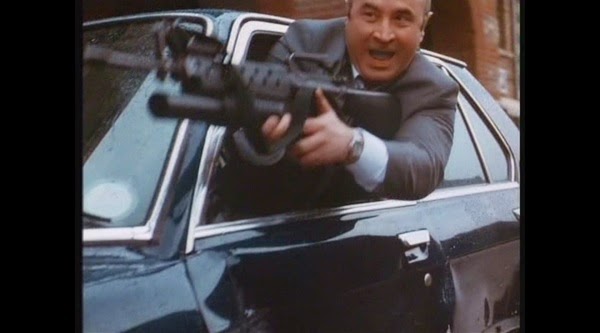 Sean Young is in almost every scene for the first twenty+ minutes, but then she completely disappears. She doesn't appear again until an hour into the movie, and then things are more consistent. While on paper that sounds terrible, it actually works really well. After all he's been through, the moment Harry goes into his bar, turns the lights on, looks around in the empty club, and we hear soundbites of Stacy, all while the moody music plays, and you get a perfect sense of atmosphere. 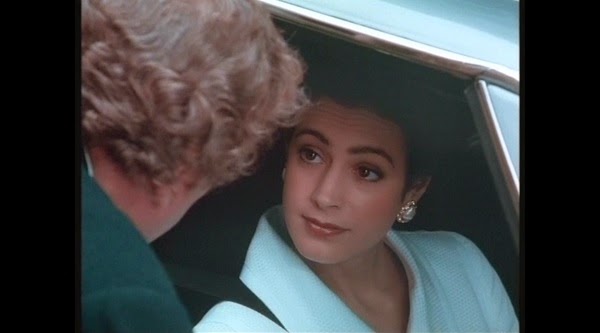 One aspect I really liked about her character is how she feels about her husband. She isn't an unhappy marriage, or cheating because she lothes and disrespects him. It runs deeper than that.

Bob Hoskins may only be in the film for a scant two scenes, but his great acting chops still come across. You know someone's a great actor when they It's a shame his character dies. Hell, it's a shame Osgood dies too. Poor Harry, two old friend are dead by the end, and a third turns out to be a psychotic villain!...And also dies.

Ian Holm isn't in the film a whole lot, but he still makes for a fine villain. The rest of the acting is all round good. Jack Shepherd is especially good in his small role.

One particular highlight of Blue Ice is the surreal torture scene, which is both brutal, and weird as hell. 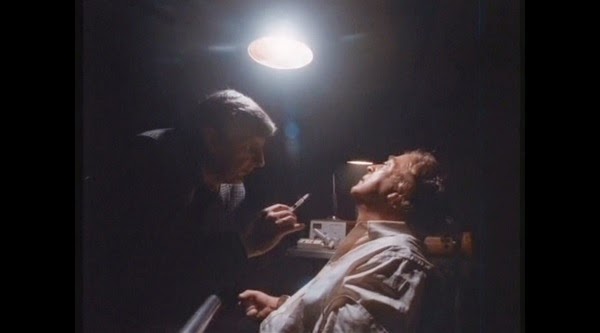 And the revenge Harry gets on the nervous music-lover who had him tortured is fantastic! Earlier, when the guy was first talking to Harry in the club, he talks about his extensive record collection, and how he even has the full printing of an extremely rare set from the 1920's. I'll let your mind figure out the rest. This is what happens to people who fuck with Michael Caine!...those poor records!!

One thing I do wish was explored more is what Garcia says to Harry about his killer instinct. Not that the film is lacking in any way without that avenue though.

The score is fantastic! The jazzy aspect is good, and as for the rest, a slight tiny tad repetitive, but not bad enough for me to even want to use the word repetitive. It's sombre, mysterious, and does wonders for the film's atmosphere. It's amazing how much a few simply musical strokes can do for a film! 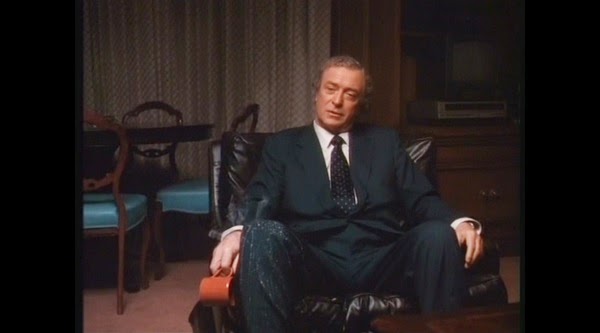 One of the only problems I have with this movie is this one scene. Harry is showering, and...*gasp!*...Someone's in his apartment! The tension music spikes up, the shadowy, mostly unseen figure comes closer to Harry's location, goes into the bathroom, AND!....it's just Stacy. Screw you, movie!

And the bombing of Harry's club late in the film is unnecessary. It leads to a good scene with the recovering piano player Buddy in the hospital when Harry's visiting, but it really feels unneeded. Especially in the way the scene is structured. The bomb explodes when Harry and Stacy are outside the club, it very quickly cuts away to the hospital, where Buddy's being rushed to emergency, and then a split second later, we cut to Harry and Stacy talking by the Thames. The film goes through three scenes in less than ten seconds! And the explosion doesn't really have and lasting effect on the main characters-It just happen. 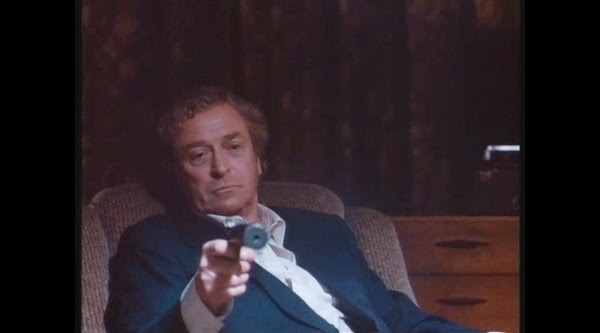 Another thing-In the climax, Harry is running about a 'place', evading security, and eventually ensures the people looking for him will be searching a very different place, then promptly does something very conspicuous. Also, I don't quite think radios are so easily destructible! And there's one confusing scene, where I don't get how Harry killed one of the henchman. Plus, as well as the shipping hook on the villain being a bit Just So Happens, it's also a bit stupid, but at least Harry doesn't survive the massive bullet barrage unscathed like an 80's action hero, so there's that. And finally, there's a bit of ADR fuck-up with the brown-bread line in that scene. 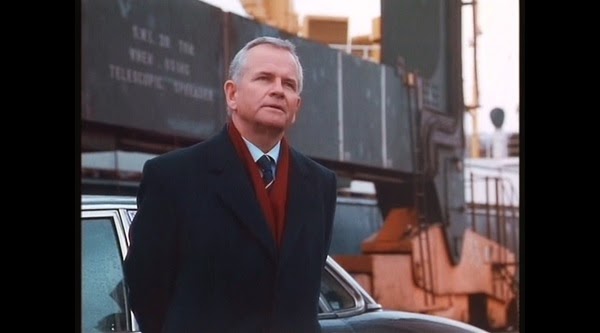 A hilarious thing Michael Caine says in this movie is when he's pretending to go to Ian Holm's character for help, he says "If I end up dead...Ensure that whoever did me gets done". On that note, Blue Ice is a fantastic film, and you should watch this underrated classic as soon as you can! It needs love!
Posted by Chris Hewson at 10:41 AM