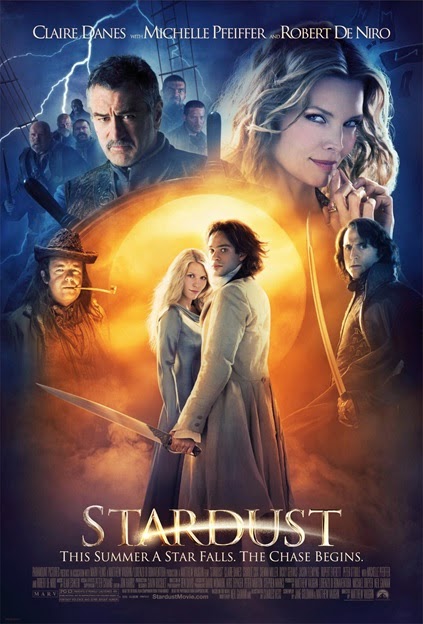 The film I'll be reviewing tonight is Stardust, a 2007 fantasy based on the book written by Neil Gaiman. A few years ago, that would be great news, but now, Gaiman is on my shit list after penning quite literally the worst episode of Doctor Who ever! And plus, the Stardust book is apparently really depressing, so no, I don't give a crap about Neil Gaiman, whether he wrote The Sandman or not...

Eager to impress his crush Victoria, 18-year old Tristan Thorne (Charlie Cox) ventures across a mysterious wall in his town-which all townspeople are forbidden from crossing-in order to bring back a falling star. On the other side, Tristan finds himself in a strange fantasy world, where he finds the fallen star-Yvaine (Claire Danes), who's none-too-happy about being knocked out of the sky. As it turns out, not only are the murderous heirs of the now-deceased ruler of the kingdom after her for her pendant, so they can become king, but an evil trio of sister witches have depleted the power of the last star they found, and they intend to find Yvaine and cut out her heart, consuming her energy...

Stardust ranks as one of my favourite fantasy films, and for good reason! The plot is very well-written, and a load of fun. The characters are pretty good, with Charlie Cox as Tristan Thorne making for a good lead. It's pretty awesome seeing him evolving from a nervous young stringalong, growing, becoming braver, and an all-round badass! The scene when he goes back from The Wall to Victoria is his best moment to me. As for Yvaine, there's not really anything to her other than she's feisty, and she falls in love wih Tristan. That's not too much of a problem, as Claire Danes does a great job*, and not only is the romance between her and Tristan well-written (if a bit obvious and cliche), but Cox and Danes have great chemistry together!

*For a fun time, watch this right after Homeland, or vice versa...Also, hide the box-cutter, because JEEZ, Danes' character in that show is depressing!

The acting is all very good. Michelle Pfeiffer is great as the evil Lamia, the film's main villain, the actors playing the heirs are all good, and Robert De Niro is great as the transvestite benevolent pirate Captain Shakespeare.

The effects are very good. Some's practical, and some's computers. The CGI is good, and never too obviously CG.

I have only a few problems with Stardust. The first is the plot hole at the climax. I originally thought that Lamia's sudden sorrow and letting Yvaine and Tristan go, only to suddenly backpedal with evil laughter was because she wanted to get Yvaine's hopes up, so she'd be glowing when Lamia slices out her heart. That makes sense, but Lamia then starts acting evil again, which'd completely kill that shine...

...But on second viewing, I realized that's not explicitly said, so it may not be the case. In that case, I'll instead complain that Lamia's attitude is weird, out-of-nowhere, annoying, and trite. And speaking of the climax, it's a Love Defeats All! type ending. Blech! Stardust, it didn't work for A Nightmare on Elm Street-What makes you think its going to work for you?!

And as for the minor comic relief Ferdie, I feel his fate is way too harsh and out-of-tone. It'd likely be in perfect tone with the book though, wherein Yvaine's unicorn helper is gorily killed, and the ending is a complete downer. I've no idea if it's a good book or not, but the general happier nature of the movie make me advise you to only bother with it, and not the source material.

Stardust is a great fantasy film, and I absolutely recommend it! For great effect, watch this as a double-feature with The Princess Bride! They might not share much at all in common, but they'd definitely complement each-other!
Posted by Chris Hewson at 8:12 AM