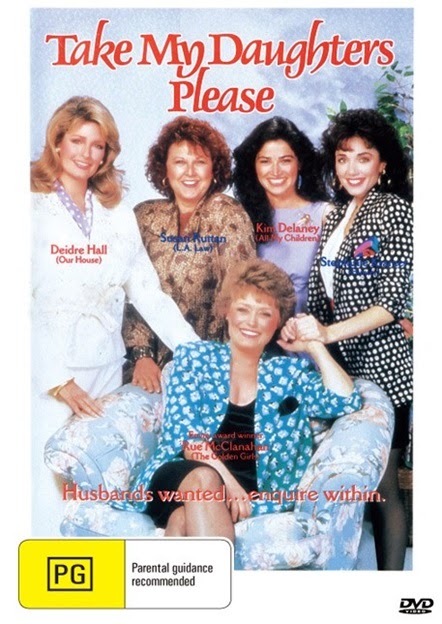 I'm not exactly the type to go out searching for girly 80's big city romantic comedies, but I do make exceptions from time to time, like when I bought the DVD of 1988 TV movie Take My Daughters, Please the other day.

Unfortunately this is a very obscure film. A cursory Google search reveals nothing, aside from actor filmographies, and an IMDb page with no poster and zero reviews. Thankfully the whole movie is on Youtube, so it's not like this movie has entirely fallen through the cracks (unfortunately it's a lower quality print, with an annoying watermark in the way, so getting the DVD is my suggestion). By the way, IMDb has the running time wrong by eight minutes, so don't think the Youtube version is cut. I tried to edit the change, but that was too much of a headache. The movie also has a DVD release, which would have surprised me seven years ago, but not anymore. Not when you can find a DVD of a Taiwanese film about Robocop fighting the Godzilla-empowered Avengers.

Columnist and widow of six years Leilah Paige (Rue McClanahan) goes on a talk-show, where an esteemed scientist tells her about the odds of the current generation of woman getting married, which he claims to be an extreme low, in part due to the way they were raised, according to him. Enraged by the statement, Leilah takes it upon herself to ensure that her four daughters, Evan, Nell, Courtney, and Jess (Kim Delaney, Diedre Hall, Susan Ruttan, and Stepfanie Kramer-What?! Stepfanie?!) all get married...

Despite its title initially giving me flashbacks to misogynist old jokes and Folgers coffee ads, Take My Daughters, Please took me by surprise! Not that I was expecting a bad film out of it, but still. It's not an amazing movie, but it's a funny, highly enjoyable sit for 92 minutes. It's got an entertaining, well-written plot, and plenty of likeable characters

The acting is all good, with the main actresses all doing fine jobs (is that technically a tautology? Eh, doesn't matter-I like tautologies anyway), with probably the best in the bunch being Rue McClanahan. Add that to the list of reasons I want to watch The Golden Girls!...Of course, I'm a guy, and as such I'm not permitted by Man Law to admit wanting to watch The Golden Girls, so...pretend I said nothing...

When watching this, you'd think you know exactly how the finale is going to go down, but surprisingly, this movie doesn't end on a really cliched note.

I didn't much like how Courtney and David's plot ended up, but their final scene isn't the be-all end-all of the plot, as it suggests more could happen offscreen in the near future.

The only thing even close to being a problem with this movie is the ending. No, don't worry, it doesn't suck, nor is it particularly abrupt. I just wish the movie could have kept going for another ten/fifteen minutes, so it could have . Thankfully, it at least wraps up the loose ends (something you won't be sure of until the final ten seconds), so the movie only barely feels complete.

The film's score is decent. Mr Sandman plays three times (don't worry, only one is a complete playthrough of the song, and another is over the ending credits), which had me thinking of Halloween II first, Back to the Future second. There's also a neat instrumental reworking done that plays a couple of times.

Take My Daughters, Please is a highly entertaing comedy, so if it's your kind of movie, I definitely recommend you take the time to watch this obscure gem! It doesn't deserve to be forgotten...
Posted by Chris Hewson at 8:43 AM