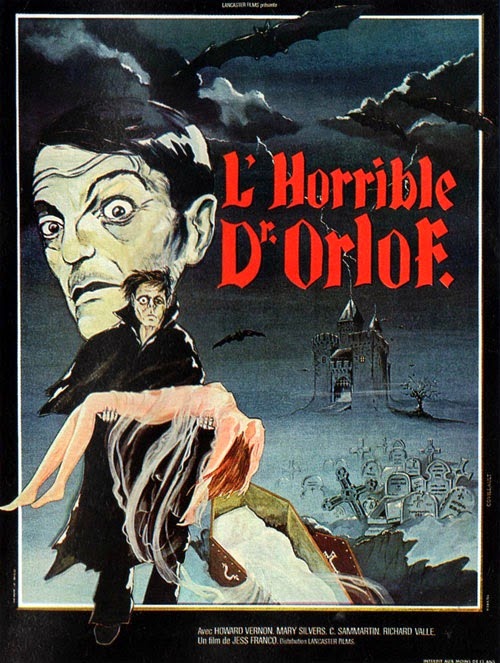 1962's The Awful Dr. Orlof (thankfully not aptly named, just as The Horrible Dr. Hichcock isn't) is regarded as one of Spanish genre filmmaker Jesus 'Jess' Franco's best films. Franco made nearly (or over) two hundred movies, and some are good, some are bad, some are awful, some will fucking eat you, and a few are really good!

In France, 1912, several women have disappeared, and the police are desperately searching for the culprit. The man responsible is Dr. Orlof (Howard Vernon), a deranged doctor who's been kidnapping women in order to give his disfigured daughter a new face. Each experiment has been a failure for the mad doctor, hence the growing death toll as he desperately craves more test subjects. Orlof soon realizes his mistake-He only tried taking the faces of dead women, not living ones...

The Awful Dr. Orlof is a pretty simple movie. It's a straightforward 'bad guy doing bad things, while hunted by police'. A majority of the movie is the police investigating, and thankfully the lead character Inspector Tanner is likeable. As for his girlfriend/fiancee Wanda, she's a pretty proactive lead, which is nice!...Although she does still need to be saved at the end. At least she is saved though-As this is a Jess Franco film, I was expecting something absolutely horrible to happen to her (akin to bumping into Ilsa the Wicked Warden at her most sadistic). The finale is pretty tense, but Orlof is taken out far too quickly, and the movie's ending is extremely abrupt! 1920's style abrupt!

The Awful Dr. Orlof is surprisingly tame for a Jess Franco film. There are boobs in a couple of scenes, and a little bit of blood, but the movie's basically PG. Because of this, this is probably one of Franco's more accessible movies.

Something you might have noticed by now is Dr. Orlof's similarities to George Franjou's 1960 film Eyes Without A Face. According to Jess Franco in an interview on the DVD/Blu-Ray, he claims that Orlof is not a ripoff, but that he and Franjou met up before 1960 and discussed their movies with each-other, deciding to each make their own take on the face transplant horror idea. Now, half of everything Jess Franco says should be taken with a grain of salt, but this might be true. Who knows...

Orlof's soundtrack is pretty decent, with some ooky scoring. The main theme, however, is an annoying cacophony of metal banging!

The Awful Dr. Orlof isn't a great film, but it's certainly enjoyable, it won't scar your soul like other Jess Franco movies, and it's a neat entry to Spanish/French horror if you're curious...However, good luck trying to find it for a reasonable price! There's no such thing as an affordable Redemption DVD! Fucking Redemption!...

*I was going to have plenty of screencaps from this stylish flick, but my Blu-Ray copy is being a bastard and not running on my computer.*
Posted by Chris Hewson at 5:41 AM