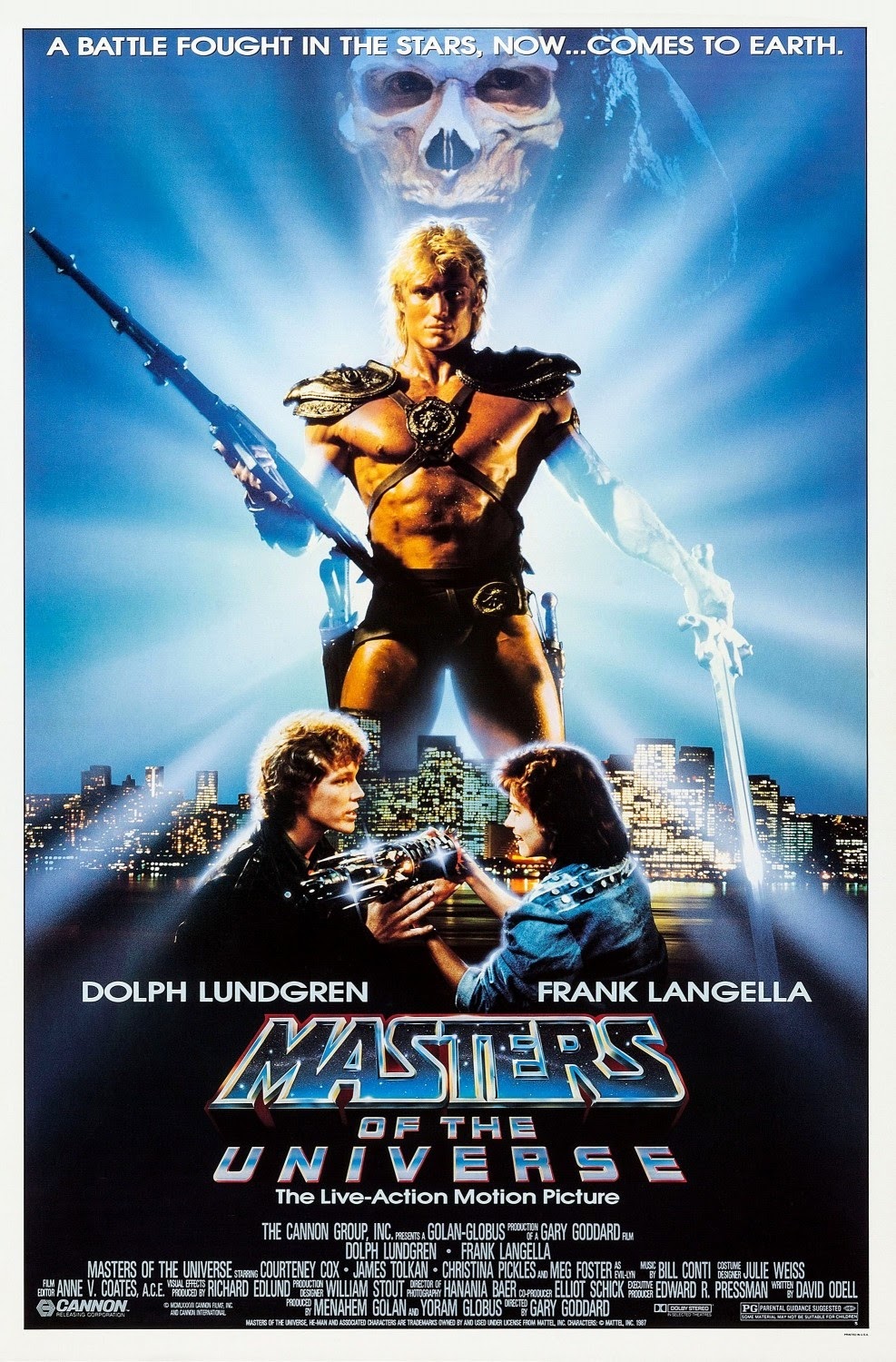 He Man and the Masters of the Universe was an extremely popular Saturday morning kid's cartoon, whiich had countless viewers, and lasted for years...And that's about all I know about He Man, aside from the fact that it's eTernia, not eTHernia, and Sheera, not She-Rah. Actuallly I have one more thing to say before I exhaust all knowledge of He Man that I can utilize for this intro-There's a funny 'from the mouths of babes' story I've heard about an Evangelical families kid saying 'Jesus isn't the master of the universe. He Man is!'. *chuckles*

In the far-off planet of Eternia, a war is raging. The evil lord of Snake Mountain, Skeletor (Frank Langella), has all but conquored Eternia, and only the brave warriors He Man (Dolph Lundgren), Teela (Chelsea Fields), and Man at Arms Duncan (Jon Cypher) are able to continue the fight against the despot. They soon find Gwildor (Billy Barty), a small creature who has invented a dimensional opener that Skeletor has stolen. Knowing the damage Skeletor could do with it, Gwildor uses a prototype to send He Man and his allies into Castle Greyskull, Skeletor's new base, but an enemy squad attacks, forcing a hasty retreat to another planet-Earth...

Masters of the Universe is not a good adaptation. It not only either omits various details from the He Man cartoon, but it also gets quite a few things wrong! And of course, there's the not-so-small problem with the whole film being set on Earth, aside from the first and last ten minutes! All we see of Eternia is a small, barren, rocky desert outcrop, the inside of a hut, and the inside of Castle Greyskull! This is a horrendous adaptation, but on its own, Masters of the Universe is still an extremely entertaining movie! It's got an amusing plot, fun action, and the whole movie is a blast from beginning to end! Really the only misstep is when the movie first cuts to Earth. For one, it's really out-of-nowhere, and two, the movie is pretty slow paced with near-boring human stuff for nearly twenty minutes! I guess it's understandable, since the movie's gotta set up its human characters, but this portion really does grind the movie to a halt.

Masters of the Universe is pretty decently written, but nothing special. It's just a run-of-the-mill action-fantasy, with a simple hero, simple villain, and simple conflict.

The effects in this movie are pretty good. There are decent practical effects, and your familiar '80's laser special effects, which look good. There's some pretty crummy green screen work during the glider sequence in the second act. The set design in Eternia is pretty meh, though. Castle Greyskull looks bland. Also, there's a near problematic Star Wars aesthetic, given Skeletor's darth stormtroopers!

Surprisingly enough, Masters of the Universe is quite a violent movie! Not Commando levels, but it has more blood than Goldeneye, that's for sure! I guess that's what happens when you let Cannon make a kids movie! I for one am glad that the movie had plenty of blood in it, as it makes the villains more threatening than if they were just harmlessly tossing people around.

The acting in Masters of the Universe is all decent. Dolph Lundgren is good, but not great, as the script doesn't elevate his character beyond anything other than a beefcake heavy. Frank Langella on the other hand, if fantastic! Not only does he deliver a top-notch performance as Skeletor, but he gets some really awesome bits of evil dialogue! Skeletor is by far the script's best aspect, even if he does take a cue from The Rocky Horror Picture Show meets The Village People with his getup in the climax!

Meg Foster as Evil-Lyn makes for a pretty good secondary villain, with those eyes of hers made doubly creepy as she plays the evil lady so evil, it's part of her name! A young Cortney Cox is pretty good here, as is future Star Trek actor Robert Duncan Mcneill.

Chelsea Field's acting isn't perfect, but it's serviceable. Also, she's hot! *drools* From Teela's sexy bondage catsuit to He-Man's strapped battle loincloth, this movie has something for everyone!

James Tolkan (Principal Strickland from the Back to the Future trilogy) is quite good as the skeptical cop Detective Lubic, and he gets to do plenty. Despite again playing a stern authority figure, Tolkan is very different than he is in Back to the Future, which shows that Tolkan is pretty damn talented. It kinda makes me sad that he didn't appear in more.

Finally, the soundtrack. The theme to Masters of the Universe is unequivocally the Superman theme, just slightly tweaked! This is incredibly distracting at first, but after a while, it starts to sound less like Superman. I guess due to 'indoctrination'-You hear a ripoff tune enough times and it starts to sound original.

Masters of the Universe is a bad version if He Man, but on its own it's a highly entertaining action-fantasy, and I highly recommend it! You can't often go wrong with Dolph Lundgren, whether he's violently killing things, or awesomely yelling "I HAVE THE POWER!"...
Posted by Chris Hewson at 8:59 AM