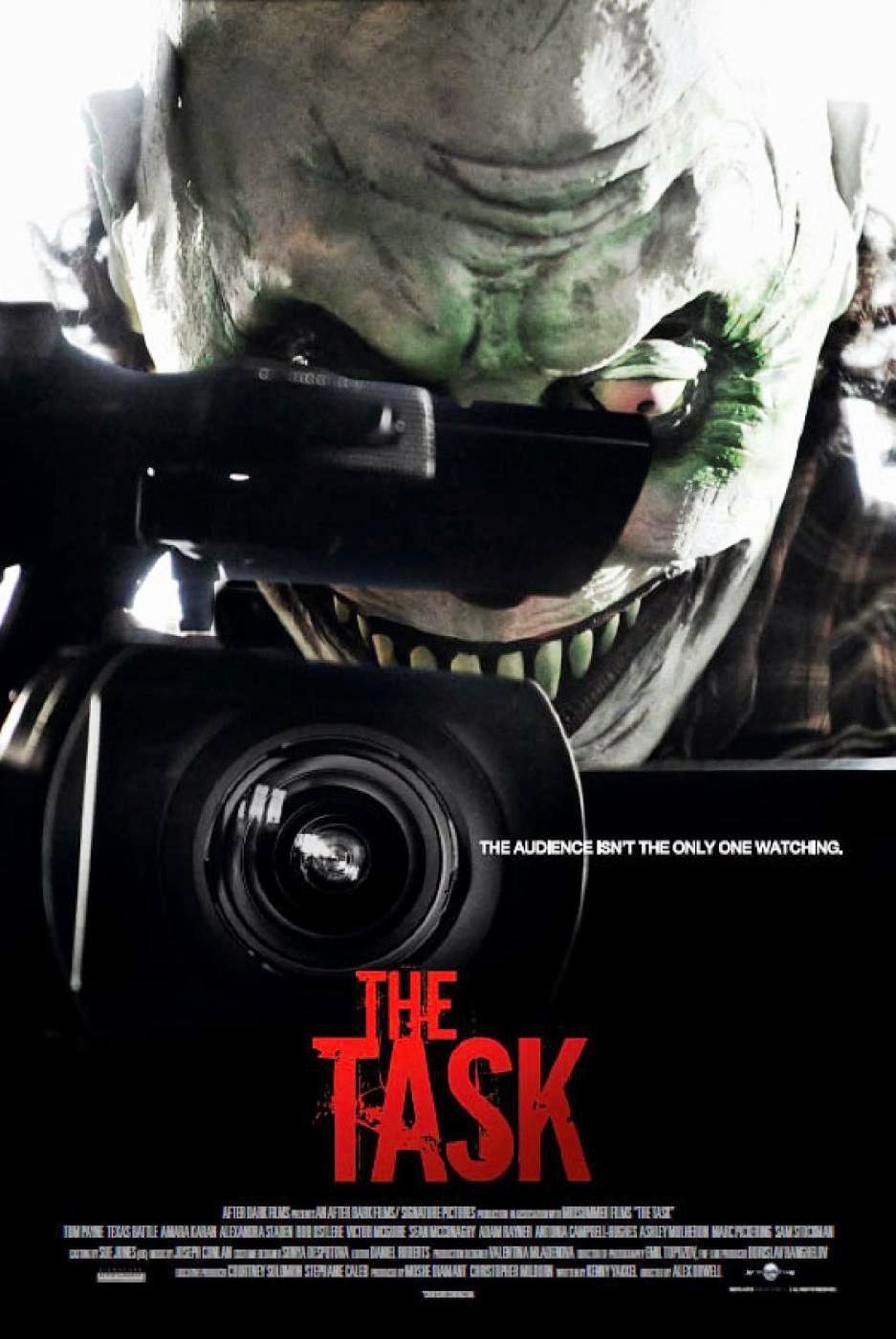 Ah, the After Dark horror festival films to die for  films so sc-sc-scary that *gasp* they can't be shown in regular theatres!...Or, you know, they're Direct To Video crap, and that's why they don't get such a release. Yeah, I am not a fan of After Dark movies. They're usually mediocre at best, hence my extremely low expectations for 2011's The Task, but this movie left me pleasantly surprised!...

Several people are collected for a new reality TV show called The Task. The aim of the show is to put people in terrifying circumstances, in gloomy locations, and film the reactions as the contestants perform allocated tasks of varying spookiness. Today's shoot is in an abandoned penitentiary, where countless vile atrocities were commited by the evil Warden Harvest, and the show's producers see it as a perfect location. However, it turns out to be too good, as what seems to be the ghostly spectre of the warden is roaming the walls of the prison, and is living up to his final words-'My work is not yet done'. Both the game show contestants, and producers are horrifyingly out of luck... 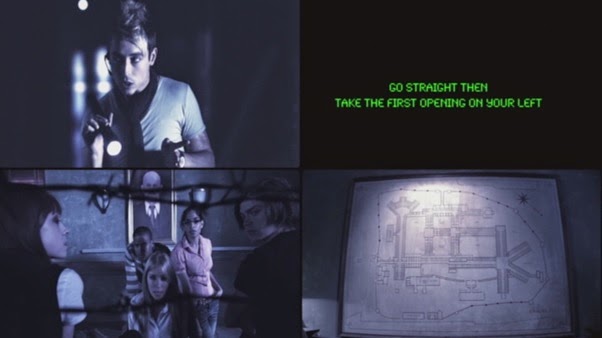 The Task is a decently written horror film that definitely has some neat scares! The characters are all likeable, never annoying (thank God!), and even get some pretty amusing lines now and then ("You know, people used to say I look like Will Smith. Now they say Barack Obama... okay!"). The blonde woman is very underused though, to the point where I kept forgetting she existed. The acting is all good, which is great news, as bad acting is the real enduring terror-Bane to DTV horror films all over the globe...of America.

This is a very tense film, with numerous suspenseful scenes, and others that some may definitely find creepy, such as the chapel, and gas chamber scenes, and others. Thankfully the stupid evil clown masks from the film's poster/DVD's are only present in the film's first few minutes, when the contestants are being punk'd before they're introduced to the game show. 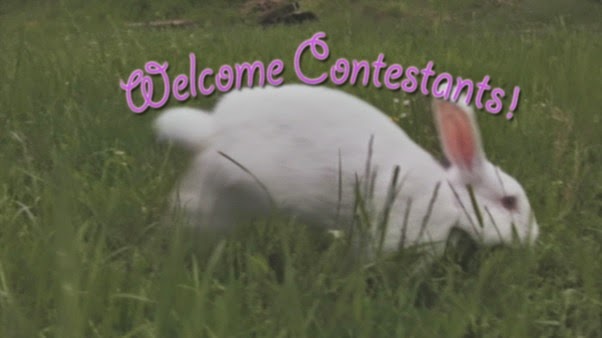 The death scenes are unfortunately The Task's biggest downfall. For a film that's rated R (Australian R, that is, not a pansy American R) and is part of a selection of films 'too disturbing to be shown in theatres', The Task is tame in the gore department. There is violence, but it's usually offscreen, or in the camera's blind spot. There is one scene which has a bit of blood pouring, but it looks so unlike blood that it's hilarious more than disturbing. There's another aspect of the death scenes that's also problematic, but that has spoilers, so I'll get to it below.

The film's villain, the possibly ghostly Warden Harvest, definitely looks right for intimidating an audience! He may just be a topless guy in suspenders, but his blankly evil facial expressions, and those cold eyes help sell the part.

The Task is a well-paced movie too. While there are barely any death scenes in the film's first 'half', it's never boring, and the plot's suspense and effective mystery manages to carry it along without the immediate need for GBH. 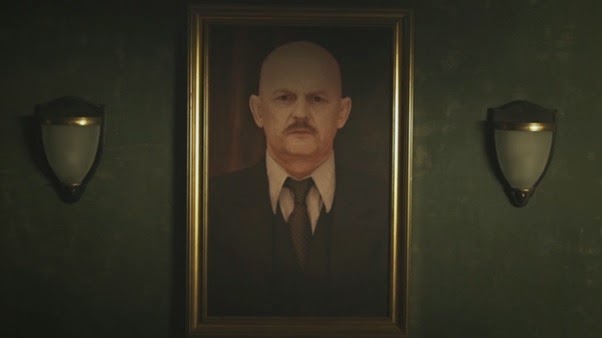 The setting for this movie is great! Old run-down abandoned places almost always make for spooky and atmospheric locations, especially prisons, hospitals, and asylums! Granted, the use of these settings are pretty cliche at this point, but still effective as long as the movie in question is good.

The Task's plot is standard, but entertaining. For a movie that only takes place in the one place, it works, and never feels like it needed changes in location or anything.

The soundtrack is yet another positive to The Task, especially the ooky music that plays over the end credits, after the badass conclusion!

The direction is very stylish, and it utilizes a split camera technique in a way that isn't stupid, pointless and contrived! YES! Suck it, Ang Lee's The Hulk! I especially like the brief interview cutaways, especially the last one. The changes that sets it out from the rest really made that scene creepy! The only problem with The Task's direction of the super zoom-ins it often utilizes. 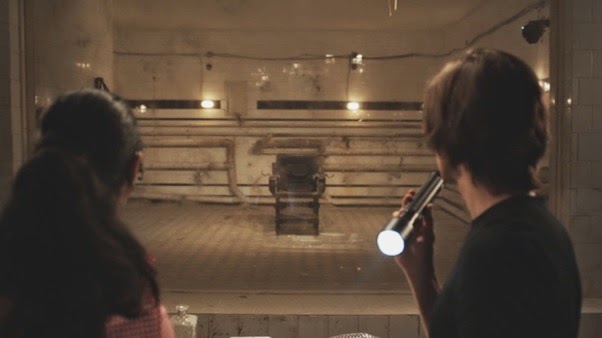 Finally let's talk about the ending. Non-spoiler opinion, it's a downer, but a badass, and unpredictable in a way downer, which makes me like it more than I would've had it just been regularly depressing. As for my Spoiler opinion...


The climax turns out just like April Fool's Day, revealing that no-one really died, and Connie, The Task's co-producer, was the show's real target. This cheating (in a good way) ending completely took me by surprise. I was grinning while swearing at the screen! If you've seen April Fool's Day, then you can clearly tell that I love that type of ending, rather than despise it like many others do (granted, I myself could very easily despise an 'everybody really survived'  type ending depending on how it's executed).

...Then things take a turn for the twist-y, and it's revealed that a couple of the 'contestants' really are dead. From then on, we get an ending that I didn't necessarily find satisfying (in that I liked these characters, and them really dying is, y'know, a downer), but it's at least pretty badass considering how it all happens.

My above-mentioned problem with The Task's death scenes is that many are far too abrupt, or are just plain offscreen. This does end up making a bit of sense considering these people aren't really dead (well, most of them anyway...), but it's still a problem. 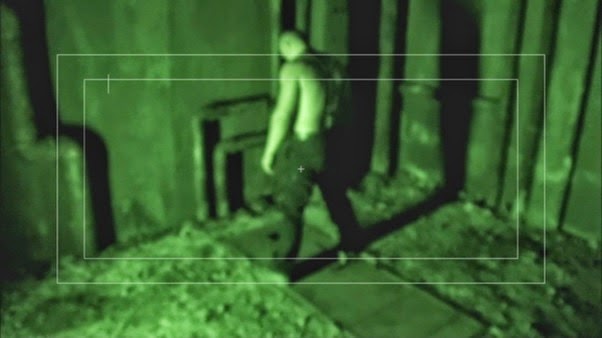 Despite being an After Dark movie, The Task is a very effective horror movie! It's no masterpiece, but it's certainly an ooky sit, and I highly recommend it!...
Posted by Chris Hewson at 8:55 AM