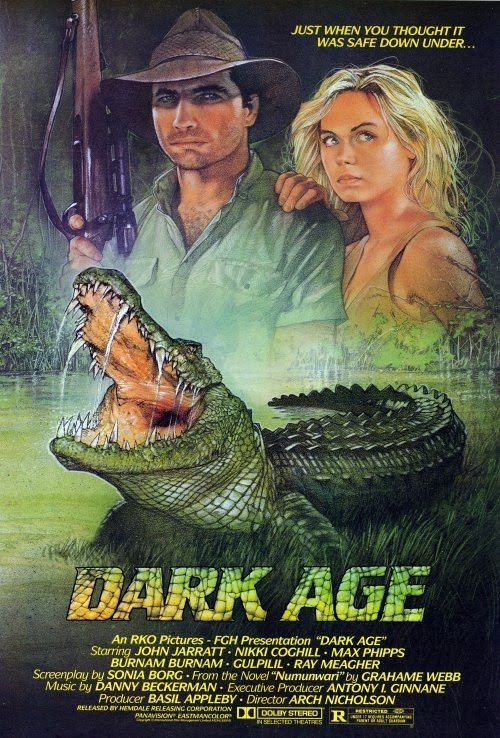 In the Australian outback, an extremely rare giant crocodile is roaming the land, claiming numerous victims. Crocodile specialist Steve Harris (John Jarratt) is sent in to find and kill the crocodile, but that's easier said that done when he receives no help from the Aboriginal locals, who view the crocodile-deemed Numunwari-as extremely sacred. Despite troubles, Harris is able to get their help on the agreement that he non-lethally trap the crocodile, and take it to a Conservation. Unfortunately, some poachers the crocodile wronged want it dead, no matter what...

Really? That's it?! A giant crocodile is on the loose? That's not a horror movie for us Aussies. That's Tuesday!

Dark Age (I have no idea why it's called that, by the way) is less of a horror film film and more of an ecological thriller. It's a mishmash of things, from animals-run-amuck, to the slasher genre, as well as other strange choices that I'll get into below. This is a decent film. Nothing I'd ever watch again, but it's a passable time-killer, and certainly decently written. It has ok themes to its story, and the effects are pretty damn good!

One aspect of this film that's a likely dealbreaker is that a kid gets eaten by the crocodile, partially onscreen. On one hand, this film has got balls! On the other hand, that's pretty depressing. However, it's not just a pointless shock moment, as it heavily affects the characters, as well as being the impetus for the film's moral dilemma...So it's a shame that it gets ignored in the last half! Seriously, not only is the love interest character Cathy all-smiles and all-sex barely two days after she witnessed a crocodile eating a kids head, but the film friggin' turns into Free Willy in the last third, and you're honestly expected to cheer this crocodile on as it crawls to safety, even though we previously saw it eat a child's head!

The whole last act of this film is just odd in how much it turns into a Free Willy type scenario, but I'll give it one positive, and that's that this is not cliched. I was expecting that Steve and the two main Aboriginal characters would go looking for the crocodile, with intent to not harm it at all, but it would attack them, destroy the boat, the Aboriginal elder would get eaten, then Steve would hurl an oxygen tank in the crocodiles mouth, then shoot it as he yells "Smile, you son of a bitch!". Thankfully the film doesn't go that cliched direction, as that would be the boring and easy way out. A borderline cop-out that would ignore the film's religious/ecological themes.

Dark Age has some very over-the-top moments, like how it nearly turns into Deliverance with the crazy poachers, one of whom is remarkably agile and, you know, not bedridden, despite having his arm torn off barely six hours prior! The guy delivers some serious evil eyes, lemme tell you, and I briefly thought that the movie would turn into I Spit On Your Grave! More over-the-top moments include the "NNNOOOOOOOOOOOOOOOOOOOOOOOO!!!!" moment John Jarratt gets, as well as his pained yell a short time later. Even worse is that it's his last vocal moment of the movie! The ending to this film isn't abrupt or rushed, except in the respect that we don't really get any resolution with Steve and Cathy.

The soundtrack is pretty good, with both Aboriginal tribal scoring, and Miami Vice style 80's-tastic tunes!

The acting here is all good, with a very young John Jarratt likely, and a surprisingly young Ray Meagher! What, you don't know who that is? Of course not. Only Australians do. He's Alf from the shitty soap opera Home and Away.

All in all, Dark Age is an Aussie horror film made up of elements of Jaws, slasher films, Free Willy, and 80's-tastic scoring, and it's worth a watch...
Posted by Chris Hewson at 4:49 AM