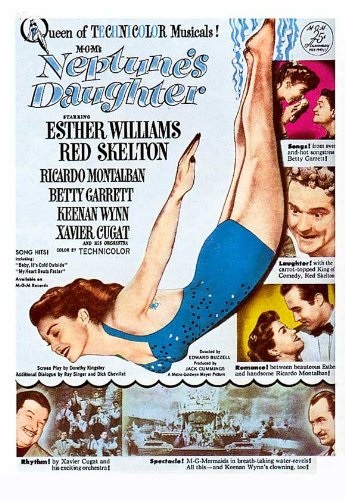 Eve Barret is a top-notch swimmer turned established businesswoman, running a swimwear company with a careful and talented eye. Meanwhile, her younger sister Betty is a bit of a ditz who's always falling in love with her flavour of the week. This time it's the South American polo team, and through a series of misunderstandings, she meets the clumsy masseuse Jack Spratt, believing him to be the handsome team captain Jose O'Rourke. Eve is furious when she finds this out, convinced the latin lover is out only for a good time, so she hunts down the real O'Rourke, who's very confused, but deosn't let it show, suggesting that Eve take him out on a date instead, leading to both sisters thinknig they're in love with the same man... 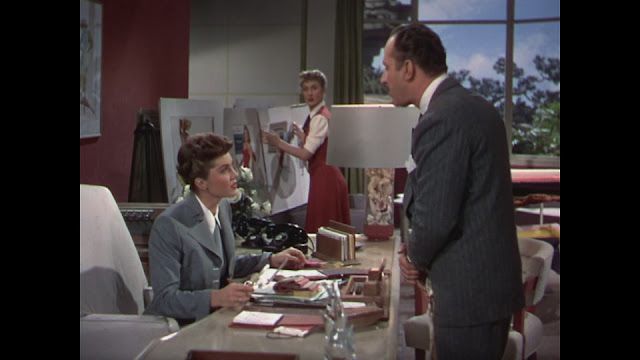 Neptune's Daughter is a wonderful little picture. It's got your typical romantic-comedy misunderstandings, but never to a grating degree, and it tells a couple of good stories side by side, with a dash of trouble thrown in courtesy of some crooks. It's got a few faults here and there, like how Red Skelton's character is never really punished for his (accidental) masquerade, with Betty not caring one iota once the truth is out, but these are pretty forgiveable. The film progresses at a good clip, never becoming boring or staid and always finding something to do, leading to a very satisfying ending. 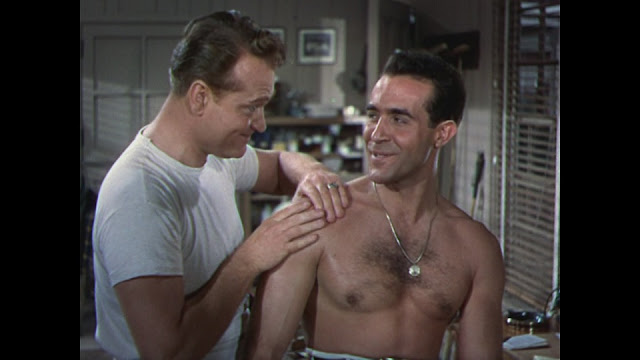 Eve was my favourite character. It's fun seeing her having grown from a successful swimmer to being hired as a model, then rising up in the ranks to be the co-manager at the top! She's got great business acumen, this is never questioned, and while it's stated that she'll be leaving the company once she's married to Jose, this comes across less as the sexist attitudes of the time, and more because she wants to spent more time with her beau, unfettered by work (remember they've only known each-other a grand total of half a week!), and because she knows she can leave the company in good hands with her partner Joe.

The shockingly coincidentally named Jose O'Rourke is a little bit of a lothario, but he's not that bad, especially considering that he's not quite as much a player as Eve thinks he is. 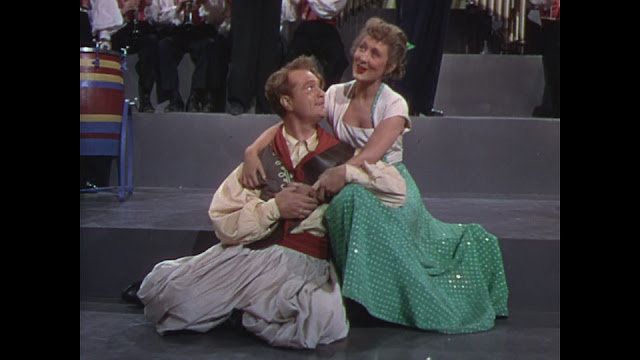 Jack is a bit cringey at times, but ok at others. Betty meanwhile is adorable, getting across well the sense of someone who knows what they want and how to get it, while at the same time having no real clue.

The only problem is how sudden their romance seems. Betty has only known 'Jose' for a couple of days, and   yet she already wants to marry him! I suppose you could just say that's typical of Betty, if not for the factthat Eve accepts just such a proposal too. One thing I do like though is that it's Betty who proposes to Jack, and not the other way around.

One little thing I like is the competence given to the 'dumber' characters. For example, Jack Spratt may be a klutzy goof, but he's a damn good masseuse! And as for Betty, she's scatterbrained, yet she's totally qualified to lead complicated exercise regimes. 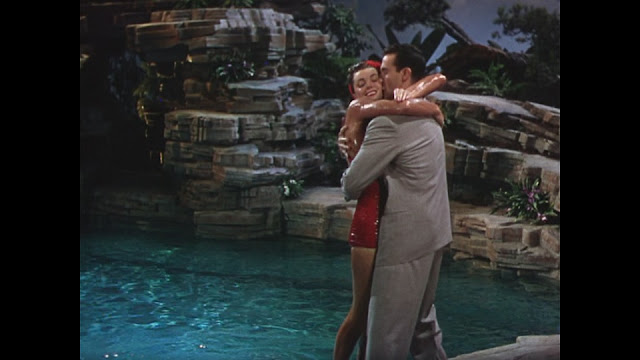 Esther Williams is fine as Eve. She certainly proves herself to be just as good an actress as she is a swimmer! Betty Garret (playing Betty Barret, because THAT'S not confusing at all!) is quite good as the flighty and slightly airheaded Betty. Also, it took me about two thirds into the movie before I suddenly realized "You know, she actually looks familiar", and recognized her-She's Edna Babbish from Laverne and Shirley!

Red Skelton is rather painful to watch. Your opinion of him may vary depending on how much of a general fan of him you are, and your tolerance of silly accents. Ricardo Montalban is his usual charming self, delivering a fun performance. 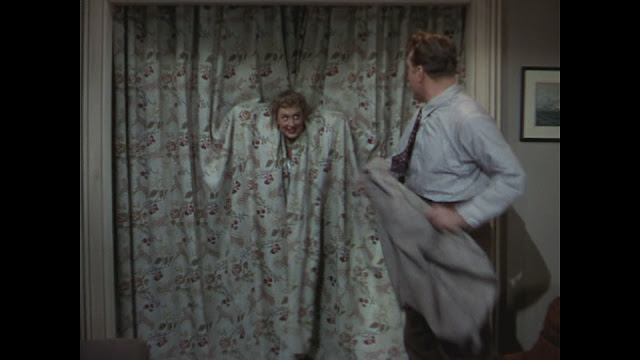 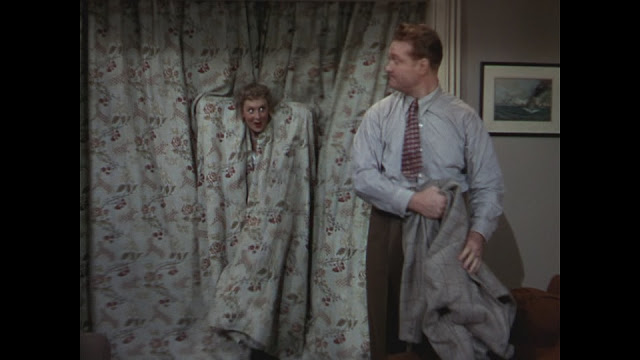 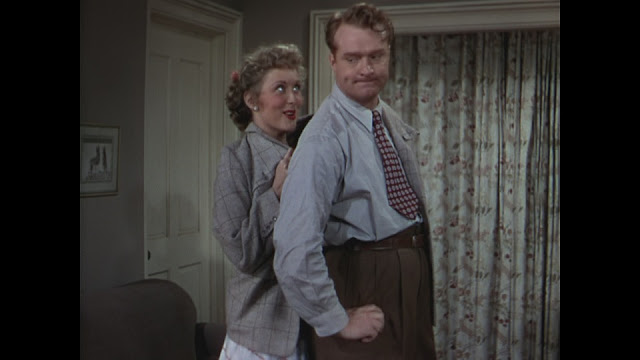 A stealth performer here is Keenan Wynn. I saw his name in the credits and said I'd keep an eye out for him, but promptly forgot until I saw it once again in the end credits. To my surprise, he's Joe! He looks so young! Completely unlike how I usually know him! And with so little of his iconic bluster! It's unnatural! Seriously, of course he does well, since he's Keenan Wynn. Other performers are all fine. We've got Mel Blanc (I knew that one character sounded like Speedy Gonzalez!), and Mike Mazurki in a comedic turn.

The songs here are pretty standard stuff. Nothing groundbreaking, but better than simply disposable. The most well known is definitely Baby, It's Cold Outside, which is loads of fun! It's quite the interesting song, too. It's a positive romance story about a woman wanting to have a nice time with her boyfriend but is worried what nosy and rumour-spreading society will think, that was misunderstood as a very rapey and aggressive piece. There were a couple of years where people on the internet criticised the heck out of it, but now the last couple of years have seen a vindication of the song. The tune's actual meaning is pretty clear from its recital in this film, especially with the flipped genders in the second half. Pretty fitting that the first comedic reversal of It's Cold Outside was in its origin! 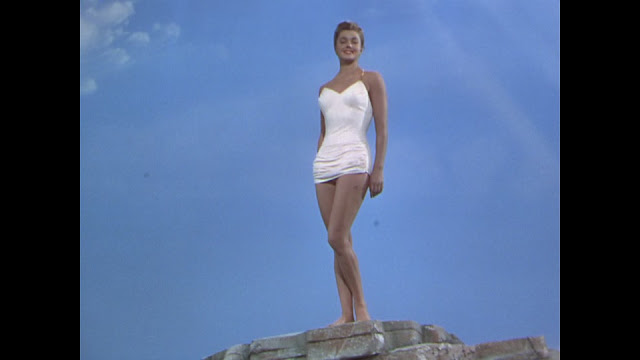 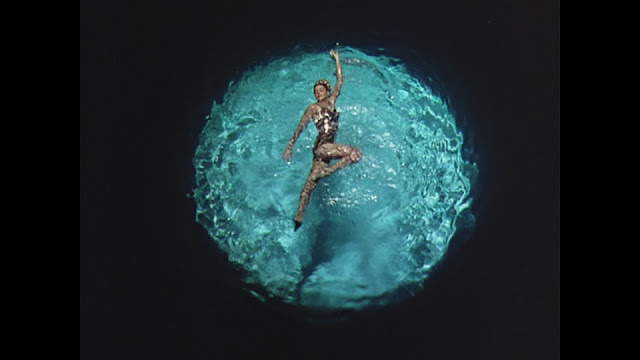 There are some neat swimming moments on display, with plenty of skill showcased, and neat fashion displayed. The finale looks really spectacular, with great swimming choreography on display. It almost makes you forget that two of the main leads have disappeared at this point, never to be seen again.

I definitely recommend Neptune's Daughter! The stars are all in top form (except for Red Skelton, but then I might be prejudiced against him), and it's fabulous musical time!...
Posted by Chris Hewson at 6:54 AM