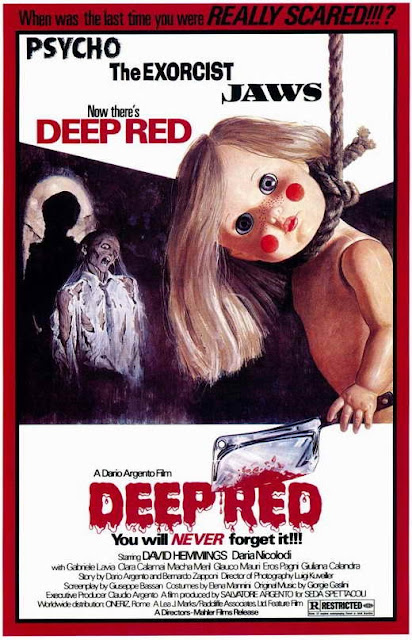 Inspired by the lurid murder-mystery novels, the Giallo genre began with Mario Bava in the 1960s and stayed strong well into the next decade, when new director Dario Argento would tip his hat into the ring, ultimately leading to the creation of Deep Red, considered the genre's finest hour...
At a parapsychology conference, psychic Helga Ulmann suddenly read the mind of a murderer in the audience. After she goes home that night she is butchered, and jazz pianist Marcus Daly is the eyewitness. Plagued by a sense of something missing, something that could crack the case, he begins to investigate. As Marcus discovers more clues, more people are picked off one by one, and his life is in extreme danger unless he discovers the truth... 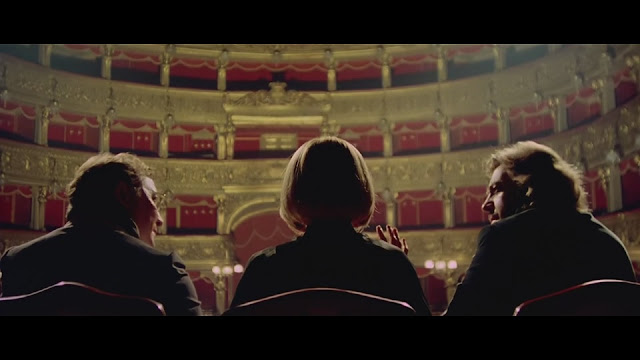 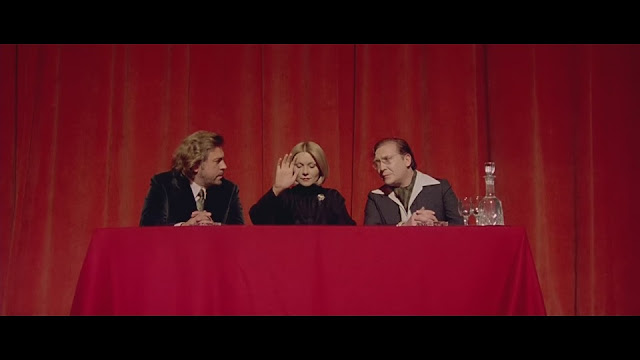 Deep Red (Profondo Rosso) is one of those rare films that lives up to the sensational taglines. Its unique atmosphere, memorable kills, and Hitchhockian levels of suspense really make it stand out as one of Italy's greatest horror films. 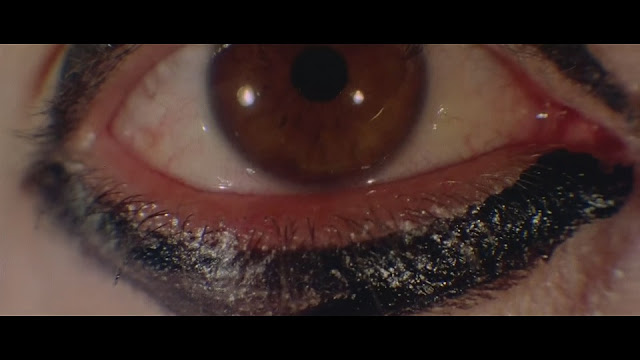 The film is a stylistic marvel, with only a small number of locations, but each look vibrant and distinctive, in their on unique ways. These range from the lavish red-curtained psychic conference (which for some reason has the absolute grottiest bathrooms! Typical), to Helga's spooky apartment gallery, the mysterious 'haunted' house. Even the simple streets of Rome are shot like paintings. But then again it is Rome, so I think we could all easily chalk that up to happenstance. 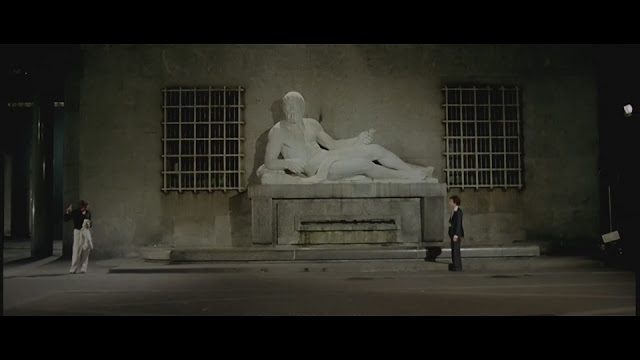 One complaint I do have is that the story is disappointingly minimal. Giallos are often loaded with story and suspects, but here there's a pretty small story and only 3 victims. The movie feels at times like it could've had a bit more meat on its bones, as all the plot really amounts to is "Marcus witnesses a murder and looks for a clue. This leads hm to a song, which leads him to a book, which leads him to a house, which leads him to a school.". All stories are bound by a chain of progression, but here it feels like the lack of story made this all the more noticeable. 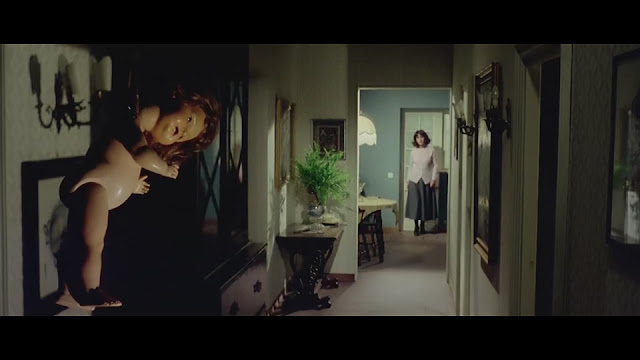 The way the mystery in Deep Red all comes together is nothing short of genius, and really has to make you applaud Argento for actually doing it! This all culminates in a slightly rushed ending (mainly because there's no real denouement) but a spectacular one nonetheless, with an unforgettable end for the killer. Whoever designed that accessory needs a raise!
The characters are an interesting and amusing bunch. Marcus Daly is a good protagonist with a strong sense of justice, and curiosity. Although I don't appreciate him being a library vandal! He also sees himself as a bit of a man's man, leading to some amusing banter between him and his feminist love interest. 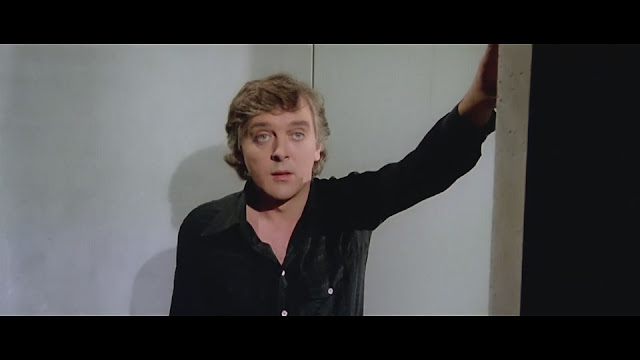 Gianna is a spunky dame. She's a dogged journalist who'll go to any length for a story. She and Marcus have plenty of chemistry, as they argue over who gets to take charge, arm wrestle over who's the better sex, and both struggle with her cramped and malfunctioning car. Gianna is also a potential suspect, which keeps us on our toes.
Carlo is a hopeless drunk, who has his moments of humour and pathos. There's clearly something eating the poor guy up, and the way his arc concludes feels very unlucky and tragic. 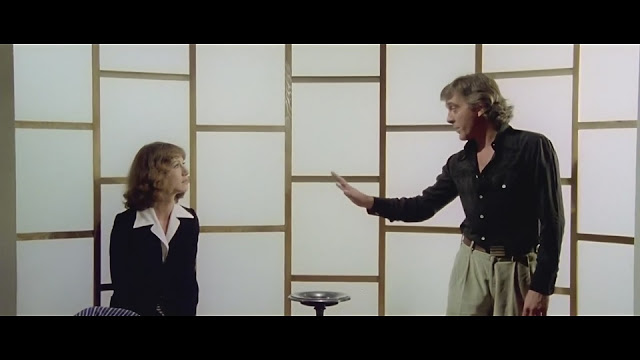 Onto the victims. Helga is one cool lady! So cool, confident, and genuinely talented (at no point do the cast doubt her psychic powers) that it's a shame she dies! Couldn't there have been a room number mix-up?
The professor is an ok dude, and is a little proactive. I'm glad, as I wouldn't wanna see Helga's friends just sit back and do nothing while a random stranger hunts down all the clues. I am a little confused how the killer knew he'd found something. Come to think of it I'm also wondering what was that message on the bathroom wall! The films acts like it's of extreme importance, but it's never explained or mentioned again.
Author Amanda Righetti is maybe the film's biggest missed opportunity, as she dies without ever having accomplished much. She never actually appears until her death scene, and we never know why the killer -, because she's not even connected to the case directly! All these unexplainable touches do help bring a sense of the supernatural into the film for some, which can be hard to see in some places, but definitely in others. 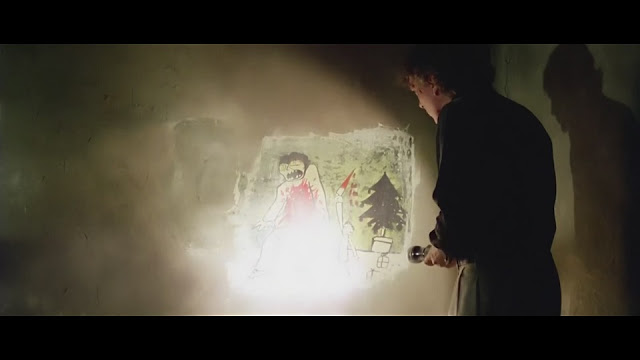 Last up are just the supporting characters. These include a creepy little girl, who I found cute! She may have a cavalier attitude with the lives of lizards, but hey, at least she shows concern for Marcus. So who knows, maybe she'll grow up to be the next plucky detective, and not a new serial killer.
The death scenes in Deep Red are each iconic, as well as gruesome. It was important to Argento that the attacks be relatable. Few people know what it's like to be shot or stabbed, but just about everyone has been scalded with hot water, or bumped their head on a corner. He takes these sensations to their most extreme forms, resulting in some nauseating kills. These effects are brought to life marvellously by Carlo Rambaldi, and there's more than enough to live up to the title. 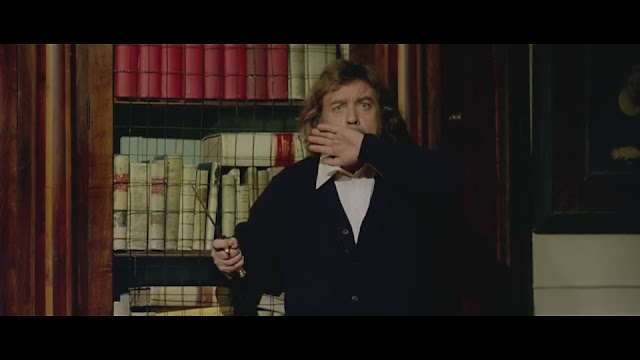 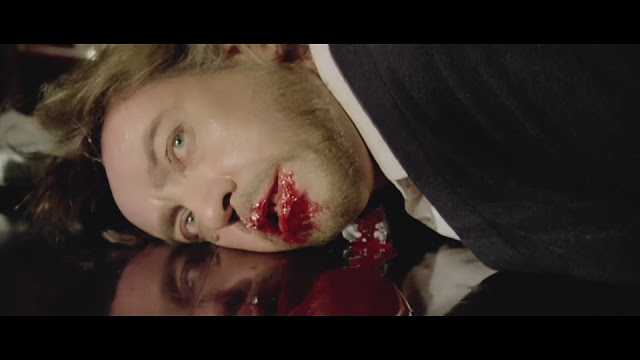 Deep Red's runtime has always varied. The Italian version runs at over 2 hours, while the U.S. Version was only 100, or sometimes even shorter if it was censored. The extended version isn't bad, and I do appreciate the greater expansion of certain elements and characters, but this is not a complicated story, and it really has no business being 126 minutes. The whittled down version still might drag here and there but it's much more streamlined. The thing that affects the film the most is that the added scenes often dilute the macabre otherworldly atmosphere. The section that really drags on is Marcus's two inspections of the house, which can be punishingly slow at times, like when he hears a noise outside, so we follow him as he goes ll the way out, only to see nothing then go all the way back in.
The soundtrack here is classic. It was Argento's first collaboration with synth-rock band Goblin, who would go on to play a bi part in his career. The main theme is neat, though a little screechy and high pitched in places. The weird thing is we actually get two versions! One is more naturalistic, and is my preferred version. 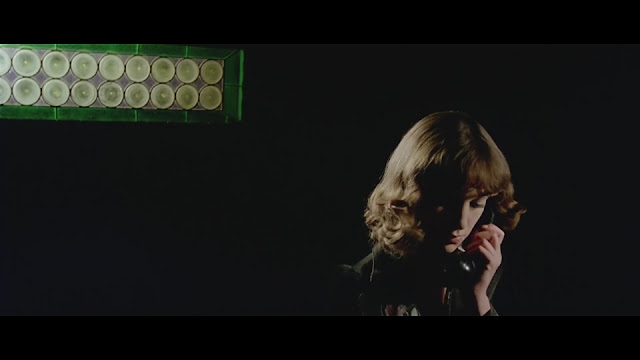 The other noteworthy tune is the child's song that keeps playing. It's just innocent enough that it sounds creepy as hell when playing. As soon as you hear that song it's like a shiver goes through you, as you know that something is just off.
There are a couple of really weird tracks later on, which verge on the ill-fitting, or just plain ridiculous. You can really see where Inferno gets it from! Scenes of characters sneaking around usually subtle music for a reason, Dario! 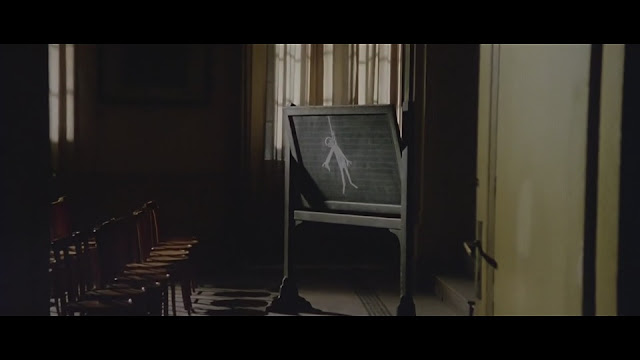 The actors all do fine jobs. David Hemmings is a likeable everyman as the lead, and Daria Nicolodi has humour and mystery to her performance. The two have good chemistry together, and this helps their romance feel like a fun component, rather than unnecessary baggage. Gabriele Lavia does well as the burnt-out Carlo, sympathetic but not without moments of levity. Macha Méril and Glauco Mauri do well in their roles. Clara Calamai is absolutely adorable. Ditto for Nicoletta Elmi, who will entrance all weird little boys in the audience.
Deep Red is a classic of the genre, and while it may have a few flaws, some of which will be more noticeable depending on your preference, or which version you watch, you'll still be glad you saw it.
Posted by Chris at 8:34 AM