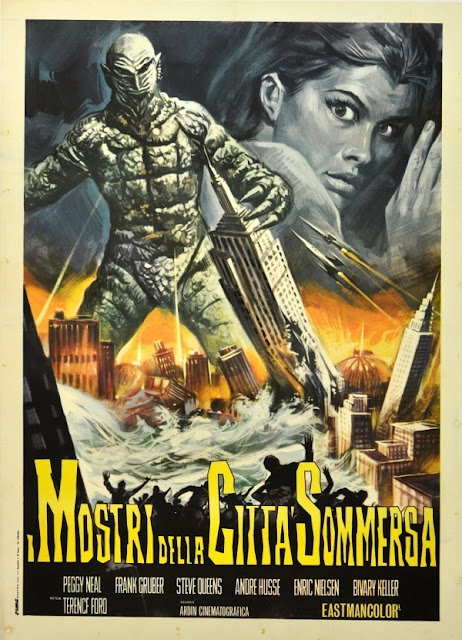 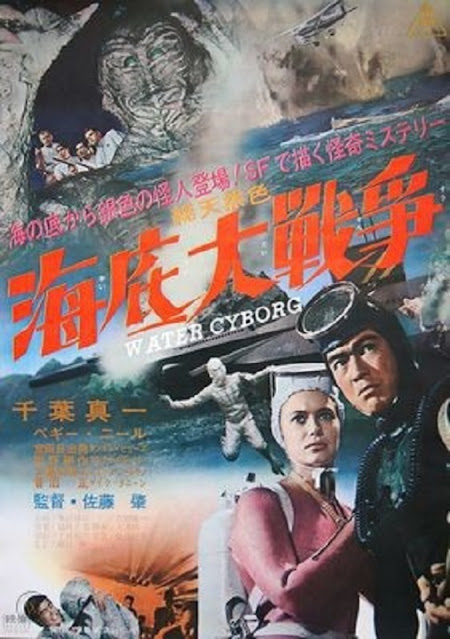 The navy are giving a routine press conference on one of their new submarines, when suddenly a mysterious figure swims past their camera. Ken Abe and his photographer Jenny are convinced this inhuman shape is worth investigating, and so they go out to investigate. They discover the existence of fishmen under the sea, but are captured by a pair of mad scientists, who reveal their plan to attack the world above and reshape it in their image... 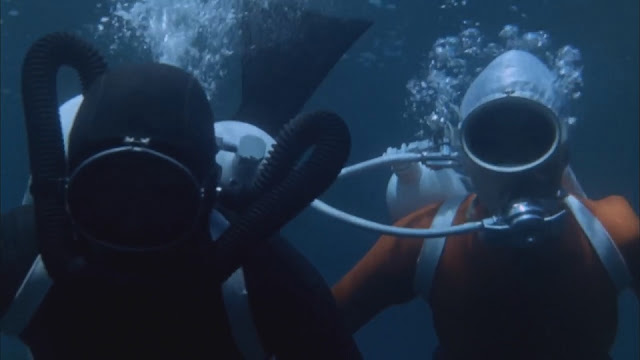 Terror Beneath the Sea is a great example of Japanese cinema of the 60s. It's got a neat concept, and one that's explored perfectly.
The film's plot is surprisingly simple, and if you break it down to basics, not much actually happens, and it never gets all that complicated. The way it's all presented though is what makes it all work so well. It races by at a great pace, and before you notice, it's already over. 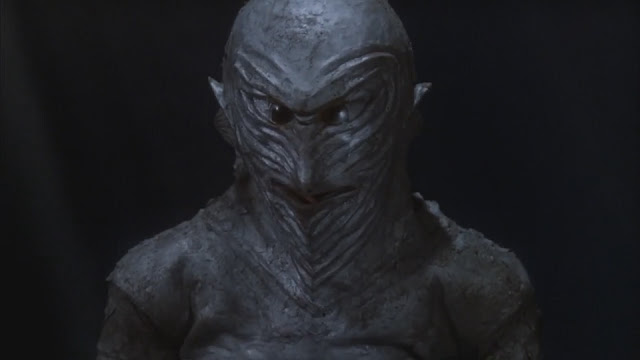 Ken is a good hero. Surprisingly proactive for a journalist, although I too would investigate mad scientists and fish people if I could. He's effective, and never too exaggerated.
Jenny doesn't really contribute much beyond wailing and going "Oh Ken!", but it's hard to blame her, since who wouldn't act the same if they were kidnapped by fishmen. 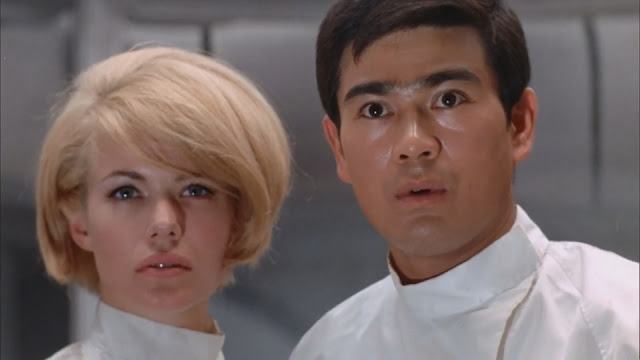 One area I found her totally overdramatic in though was in her 'transformation'. Ken and Jenny have been subjected to the process of becoming fishpeople, and it's a slow one. For now they just have a bit of flaky looking skin here and there, but Jenny acts like she's become a monster. "Don't look at me, I'm hideous!", she bellows, when she's basically fine! She doesn't even have so much as a single gill!
The villains are a neat bunch. We've got a mad scientist, and a Bond-style villain who's never seen without his cool sunglasses. They speak grandly, with diabolical villain lines, and have a great plan. 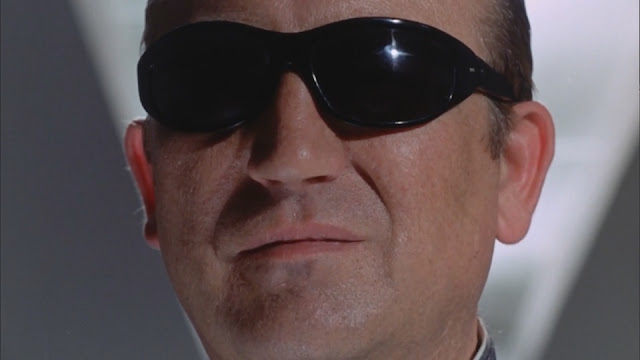 The climax has a bit of a disappointing beginning. It's instigated entirely by the navy torpedoing the base, which leads to the computer-controlled fishmen going haywire and killing everyone. While all this happens, our heroes are still strapped down to a gurney! This is all still thrilling and entertaining, but I wish they could've been more involved.
Once they get free things are great, with plenty of action, and a fun final showdown. It's mainly Ken who's fighting the remaining baddies, with no assistance at all. All three eventually get to shine in the final fight though, even useless Jenny! 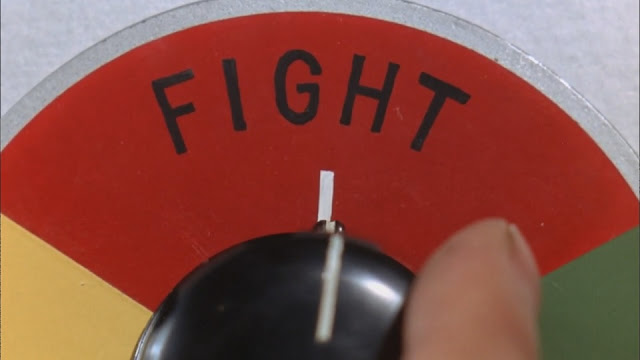 Terror Beneath the Sea is an incredibly goofy movie, and one that is always played completely straight. This makes it a very funny watch at times. The dialogue especially so. When asked why he wants to create an army of fish people to take over the Earth, the villain answers with the hilarious declaration of "It's a world that makes sense!"
Another laugh-out-loud moment is when the professor sees the madman dead, and utters the amusingly on-the-nose "Killed by a cyborg he himself created". 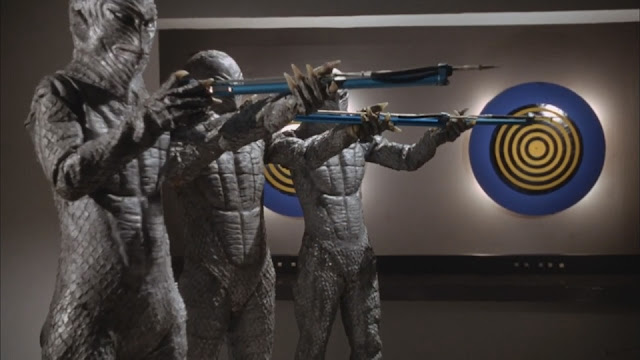 The acting here is all good. A surprisingly young Sonny Chiba proves himself a great leading man even as early as the mid-60s,  and shows his diversity in projects. Some days he'd be in ultraviolent action flicks, and the next he'd be in family friendly sci-fi adventures. Peggy Neal does well, even if her part can be minimal at times. I really dug the interracial aspect of their relationship. The movie is very progressive for the time, and it does it so matter-of-factly. It never once mentions this, it simply shows it as it is.
The rest of the actors deliver amusingly cheesy performances. Sometimes stilted, sometimes exaggerated, and always funny. The sailors were the funniest This is a film I would recommend wholeheartedly with the dub. It adds so much comedy material, and the actors really give it their all. 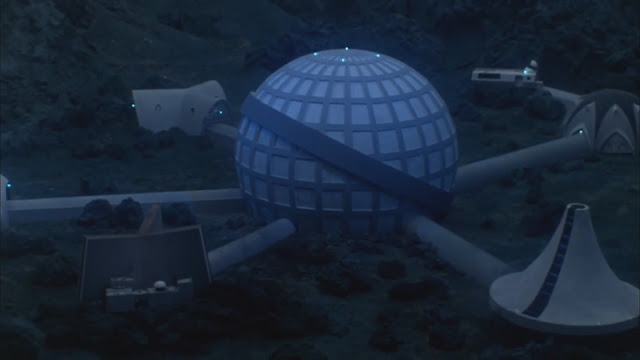 The direction by Hajime Sato contains much to admire, from the underwater shots, to the stylish photography, and more. I did find it amusing how blind some of the characters came across at times though. We'll see Jenny swim right past a fishman to her side and see nothing, but when it's completely behind her, suddenly she notices it. The ending is another amusing example of this, painting an amusingly dim portrait of this sailor.
The effects work in Terror Beneath the Sea is a treat. We've got great locations and miniatures, convincing undersea battles, and more! The fishmen may look more goofy than frightening, especially with their permanently cross-eyed expressions, but the costumes are great. The transformation we see from man to fish is also cool. Sure, it's just a time lapse of a guy getting what looks like corn chips and shaving cream applied to his body, but it's still 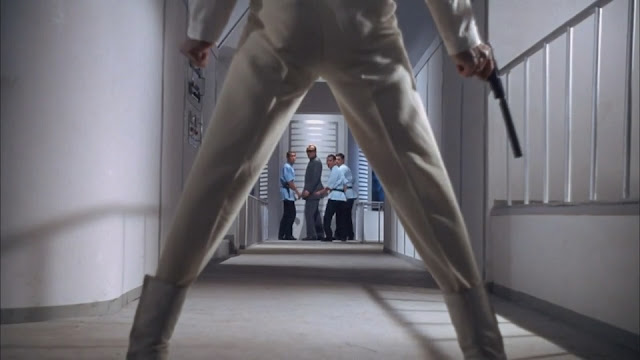 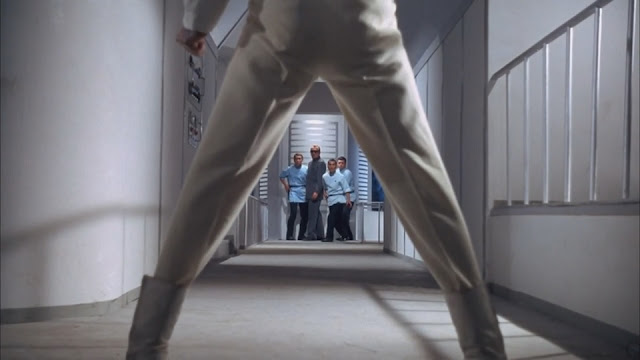 The soundtrack  It can be dramatic, low-key and tense, and lighthearted and jazzy! It really gives lots of life to the action, and is a memorable aspect to the production.
Terror Beneath the Sea is a great time. Simple and fun, and is sure to entertain no matter what...
Posted by Chris at 7:27 AM