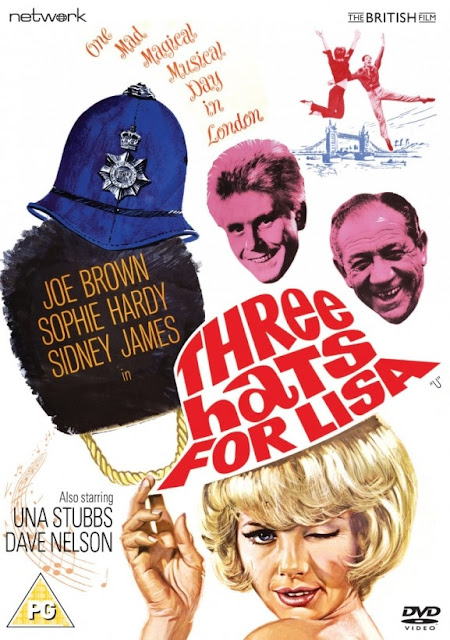 Cockney youths Johnny Howjego, Sammy, and Flora, are just milling along with their day to day lives at work, until they hear of the exciting arrival of film star Lisa Milan to London. They fob off work and race to meet her at the airport, and due to a mix-up end up face to face with the star, who takes an instant liking to the trio. Deciding to have some fun for her day off, Lisa runs away from her minders and enlists the help of the gang (along with flippant taxi driver Sid) to help her steal three hats before the end of the day... 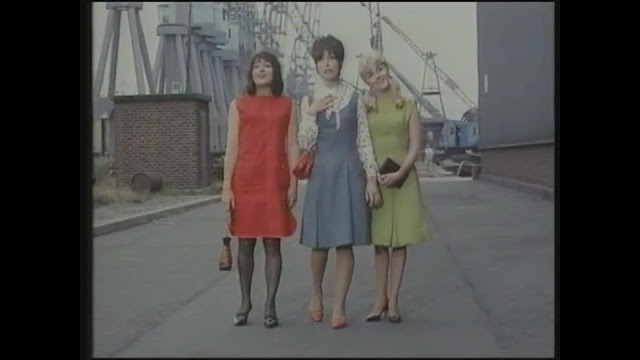 Three Hats for Lisa is a jovial musical from the 60s, and is a surprisingly good time! I got everything I expected, and more. The film is not only entertaining, and innocent, but it captures London in such a good way.
The story here is like wish fulfillment, and always in a believable way too. It really makes you feel like you're only this far away from meeting a celebrity yourself and having your own adventure. 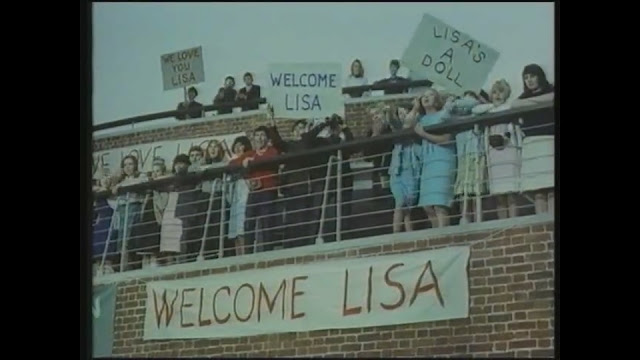 There are many setpieces throughout, with each attempt at stealing a hat feeling different, and the comedy consistently earns laughs. Everything culminates in a hilarious and perfectly fitting climax, and is followed by a melancholy but happy ending. It really captures well the difficulty of long goodbyes. 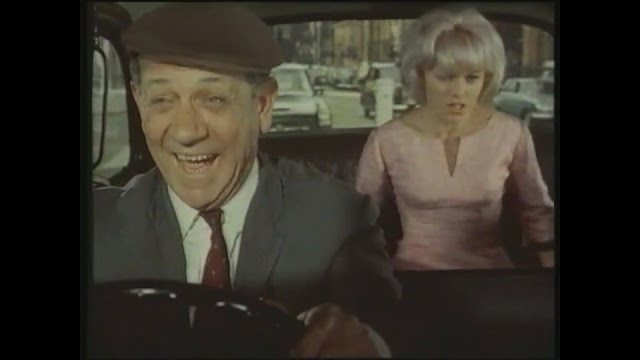 Three Hats for Lisa is a perfect time capsule of 1960s London. From the fashions, to the attitude, the slang, and all the hangouts, there is so much on display here, and the city feels truly fleshed out. What struck me most was the infectious aura of fun. The living conditions might not have been the best, and these people would have to work their fingers to the bone every day just for a couple of bob, but goodness knows they knew how to have fun! 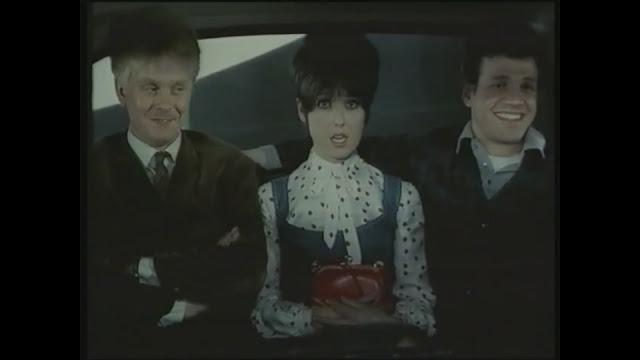 The characters here are all lots of fun, and cut a memorable bunch. The film sets all three up quickly and efficiently, and each feel distinct. Sid the cabby is a great foil for the others. He's also your typical Londoner, but of an older sort, and is very keen on getting his money, which becomes a progressively distant prospect for him as the movie goes on.
Lisa is very much your bombshell celebrity, but she comes across as equally grounded, and she fits in surprisingly well with these cockney kids. She's very earnest and genuine, and really, who could deny her a police helmet? It's not that hard to steal! 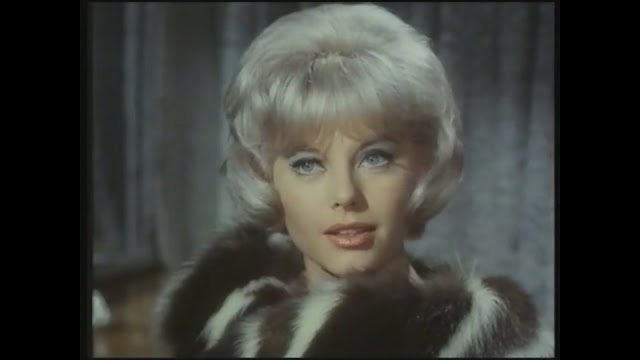 There is a little romance present, with Johnny's crush on Lisa, and Flora's crush on Johnny. Thankfully Lisa is smart about the whole thing, and can see what's going on. She doesn't wanna step on Flora's toes, and knows what will really be best for Johnny, so she helps the two young dopes into each-other's arms. We never actually get a proper romantic resolution (i. a big kiss) with Johnny and Flora, but the implication is enough to leave you satisfied 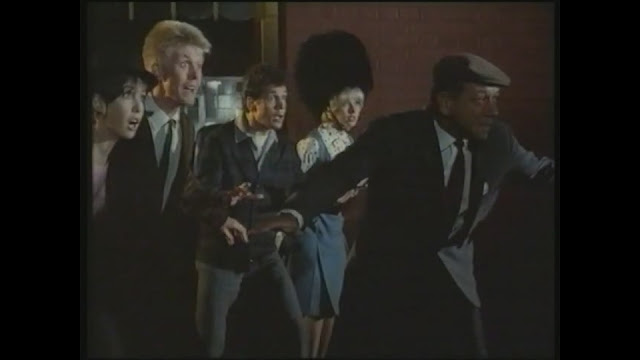 The film doesn't have any villains, per se, but Lisa's meddling minder Mr. Pepper is the closest. He's understandably on edge about his big star pulling a disappearing act on him only a day before a big event, but he needs to stop crowding her! It's her day off, man, and all she wants to do is steal some hats. Let her be! His final scene is hilarious, and a perfect way of resolving the drama. 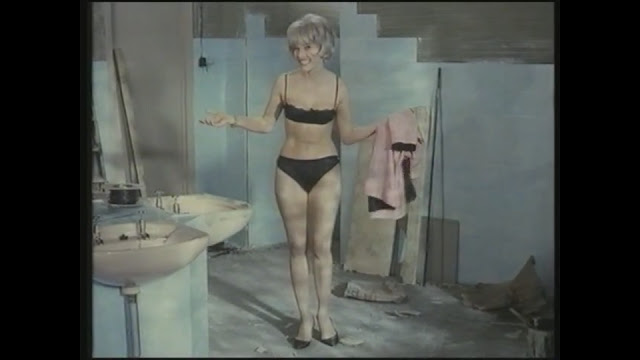 As a musical, this is an unequivocal success. If it had've just had a few song sprinkled throughout it would've been fine, but the creators went the extra mile and really packed the movie densely with songs! There's at least one every 10 minutes, and they're generally short ditties, but never lazy or intrusive. They often come with great song and dance routines too, which are elaborate, highly choreographed productions, and work great in the urban atmosphere. There's a sheer level of effort here that I really applaud. 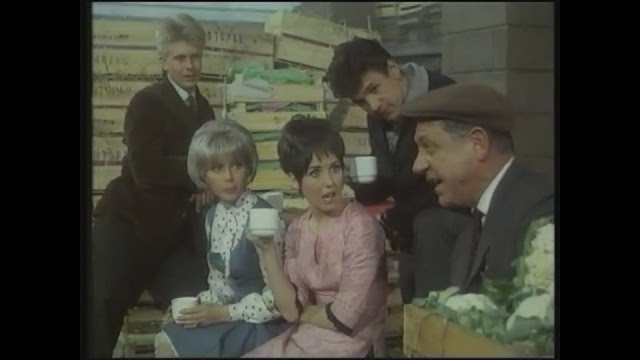 The three lead actors here, Joe Brown, Dave Nelson, and Una Stubbs work great together, and have plenty of chemistry. It's quite a shame they never got more to do as a trio. Working equally well with them is ever cheerful and humorous Sid James, and foreign beauty Sophie Hardy. She's actually French, not Italian, but same thing. At least they cast a European. She has a sultry presence, but also enough down-to-earth charm to keep her relatable. 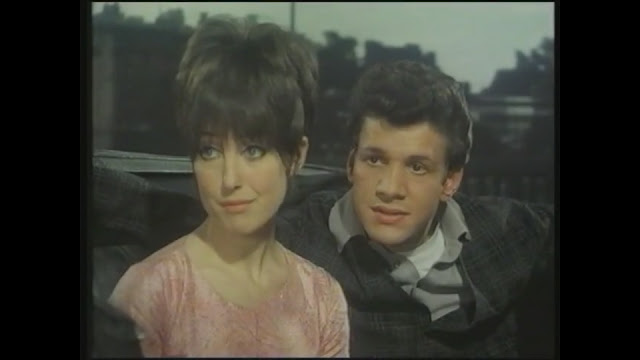 Una Stubbs in particular was my favourite of the main trio. She's so impishly cute, pronounces some words with such a hilarious cadence, and is a gorgeous talent. It's such a surprise seeing her so young, after growing up with her as lovably daffy old Miss Bat from The Worst Witch!
On a side note, like 70% of the earth's population, I pronounced her name like Oona, but the other day I discovered you actually say it like Yuna! This probably only means anything to those of you who've played Final Fantasy X, but now she's coming across like a magical heroine! 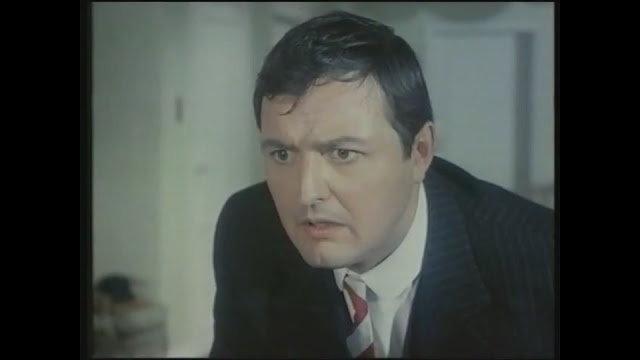 The supporting cast is great too, including Peter Bowles, surprisingly without his moustache! Eric Barker does a funny job too. There are also a few familiar faces I didn't recognise, such as Pepper's bespectacled assistant, who looks and sounds like Connie Booth (even down to the slightly American intonations), and the man whose hat is stolen resembles Kenneth Williams (which would make an amusing Carry On connection, with the presence of Sid James). 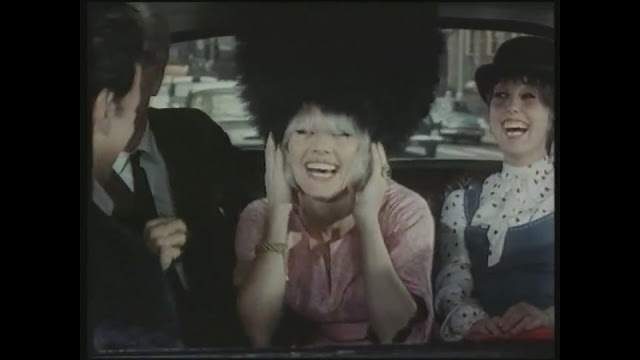 I speak without hyperbole when I say that Three Hats for Lisa is a real unsung classic of 60s British cinema! I definitely recommend checking it out...
Posted by Chris at 1:24 AM